There’s nothing more satisfying than a huge, chunky portion of meat that’s been freshly roasted, grilled or smoked when your cravings hit. Even better when you know the chef has painstakingly put love and labour into preparing it.

That was the case when I met Chef Firdauz Nasir of Noods & Meats, who has had made a name for himself on Suria as one the judges on Juara Memasak Milenia. 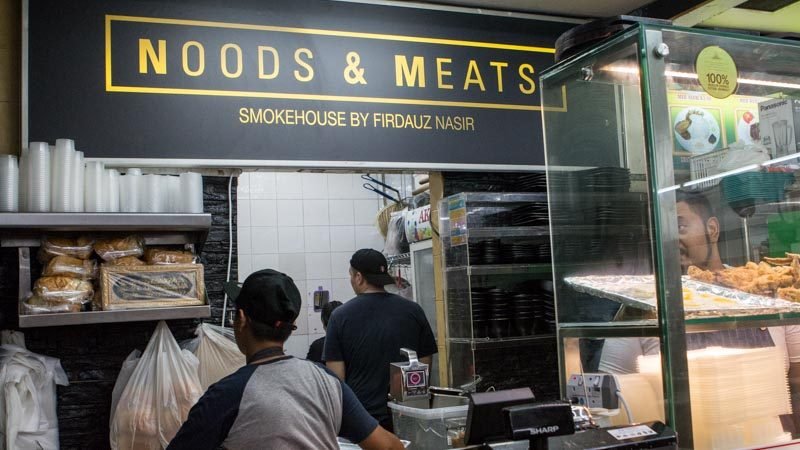 His earnestness won us over almost immediately, as he shared with us how his food philosophy stems from needing to be self-reliant and constantly curious about methodology, ingredient combinations and flavours.

The idea behind a halal smokehouse, in fact, was birthed simply from the lack of such a concept here, and since Chef Firdauz is not one to shy away from a challenge, he made it his mission to serve Yishun-landers his take on the classic smokehouse. 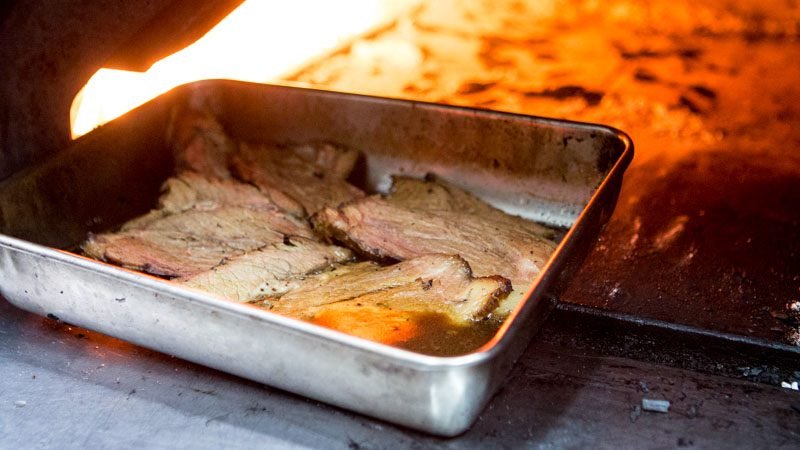 As he prepped our dishes, he allowed us to step behind the counter to take a closer look at his pride — his $400 smoker. Due to the high price of oak wood, he substituted the fuel for almond wood.

He even pointed out his two large vats of secret broths, used to pair with the different meats on the menu. We were told that whatever is smoked on the day, is only used the following day, giving the meats up to 16 hours of cooking. 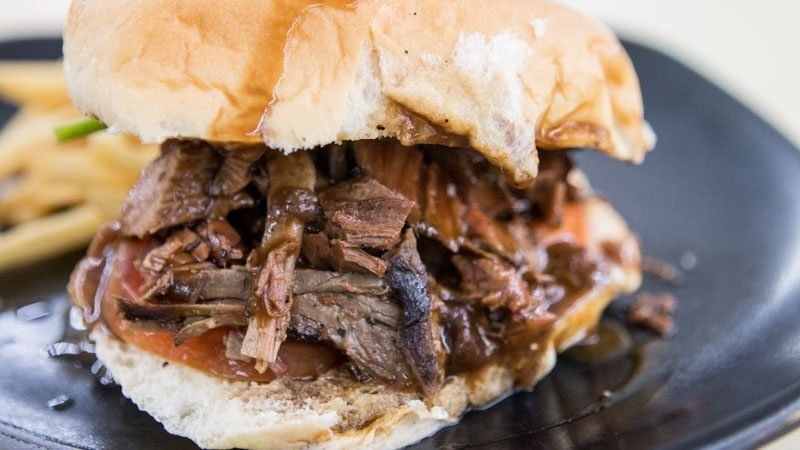 One of the results is this Burnt Ends ($6.90), beef brisket that’s been smoked in-house for up to 12 hours, served with secret Shiok sauce (remember those two giant vats I mentioned?) and Thai asparagus.

The intense smokiness that escapes that first bite was unexpected, but also very pleasing. 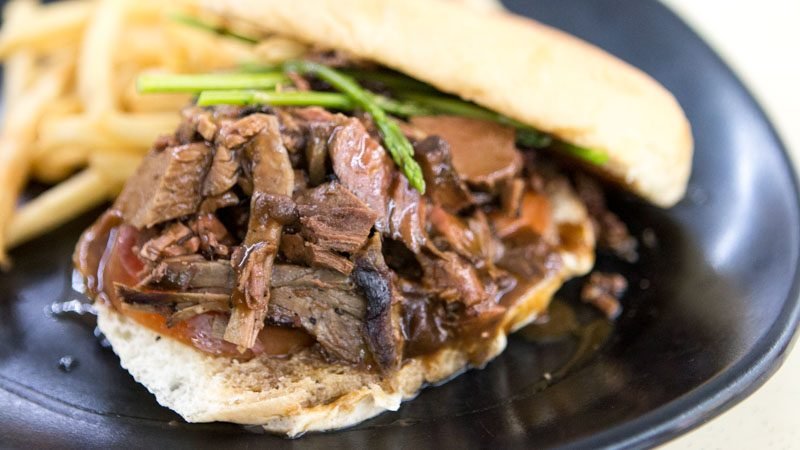 The meat was robust and had so much character to it, although the buns were sadly not much to talk about. For someone who is quite a fan of charred bits, this burger’s meat has most definitely lived up to its name. 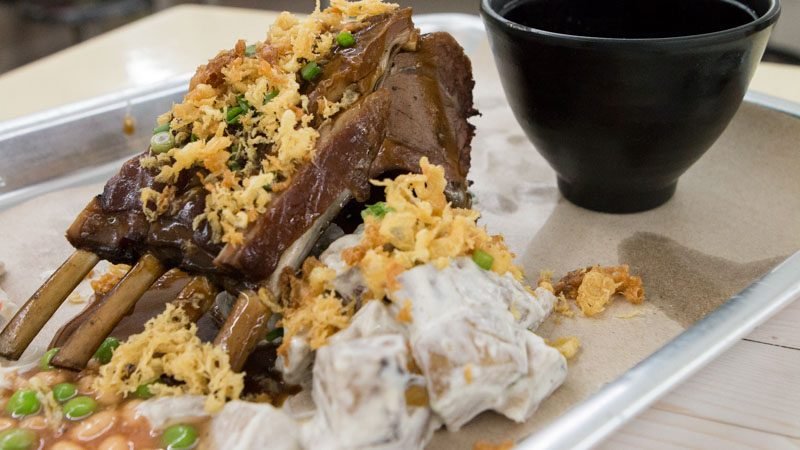 Our first taste of the meat platters was the Lamb Chope ($12.90), smoked lamb chop served with coleslaw and beans stew. What drew us in initially wasn’t even the meat itself, but the potato and slaw side. The coleslaw is homemade (and tasted great!) and the potatoes were so good, we thought they were made with high-grade redskin potatoes. To our amazement, the only magic present in the recipe was his touch.

As for the meat, it was drizzled with truffle sauce, which surprisingly didn’t clash with the familiar scent that lamb is known for. The meat could’ve been juicier, but given it’s cooked using wood, the dryness was excusable. 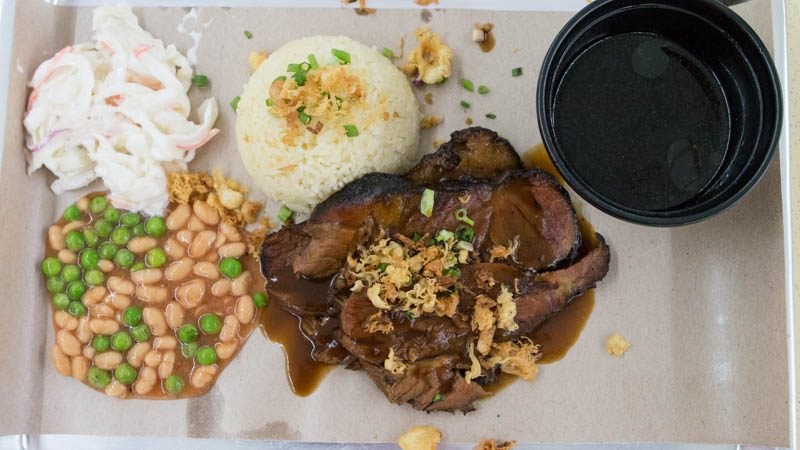 We descended deeper into the South with the Texas Brisket ($15.90), 100 grams of beef brisket that’s been smoked for 12 hours, served with a variety of side options, such as french fries, butter rice, mashed potatoes or potato salad.

I knew I had to give the butter rice a try because, from experience, most places don’t live up to their ‘flavoured’ carb promises. This rice, on the other hand, turned out to be plump and fluffy that’s brimming with richness. All made with the simplicity of Planta. 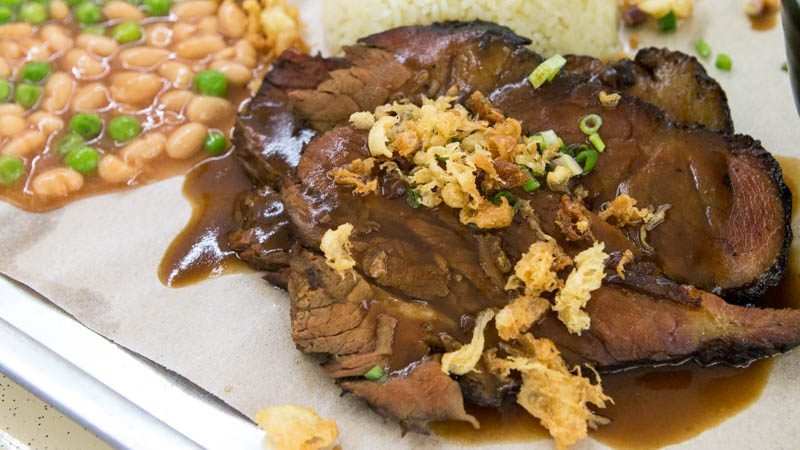 If you’re wondering what those golden crunchy bits are, they are nothing more than your all-time favourite “krak krook” (as Chef Firdauz calls them) akin to tempura bits.

Do they do anything for the dish, you ask? Well, who doesn’t love snacking on deep-fried batter bits? Meats aren’t the only homemade thing here, as all the noodles here are made in-house by Chef Firdauz himself. To put its taste to the test, we had the Bebek Nood ($9.90), roasted duck confit with truffle-scented capellini, sous vide egg, homemade sambal and shredded lettuce. Visually, the dish may look average, but the taste is anything but. We learnt that the capellini itself is made with truffle oil, drizzled into the dough before being kneaded and cut.

As a result, one is immersed in this aromatic cloud of truffle that lingers even after you’ve finished a single bite. It also coerces you to finish the entire bowl, even when you’ve already sampled three dishes prior. The duck itself isn’t too gamey, which we were particularly very fond of. Lastly, we had the YOLO ($10.90), charred chicken and smoked sausage with vegetables and fettucine, cooked in a secret broth for 16 hours. Believe or not, the sausage is your run-of-the-mill supermarket sausage, but Chef Firdauz’s executive decision to smoke it has us wishing we’d thought of it sooner. The fettucine was on-point with its al dente texture, which made the entire dish a delight to finish.

It might be a little tricky to locate this stall in Yishun Ring Road, but once you’ve chanced upon it, there’ll be no shortage of you talking endlessly about it. From Chef Firdauz’s amiable demeanour and his love for doing everything from scratch by himself, he and his culinary delights are ones to look out for.

Previous articleChannel Your Inner Beach Bum With BBQ & Booze For Australia Day At Tanjong Beach Club On 28 Jan
Next articleDucatus Cafe: Pay For Your Meal Using Cryptocurrency At This Cafe Along Robinson Rd Nusantara Singapore, Cecil St: “The Roti Boyan is packed like a...