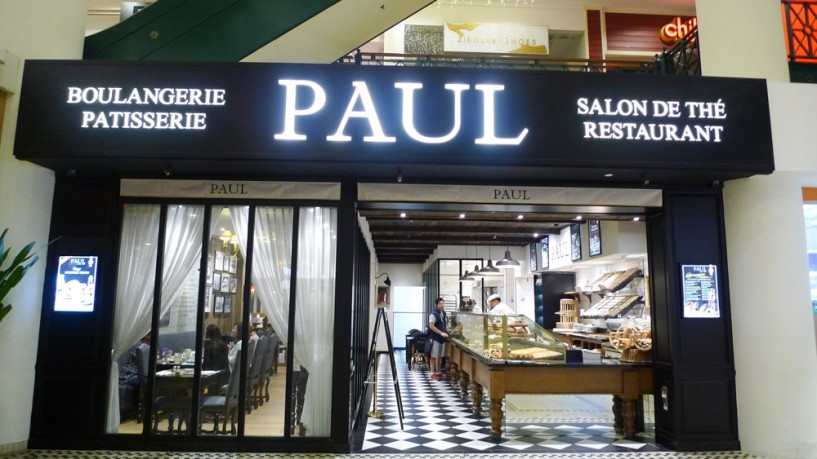 PAUL is the fruit of a proud family legacy and was first established in 1889 in the city of Croix, near Lille in Northern France. Locally, PAUL was established in January 2012 and celebrates its 125th anniversary in 2014. With such a heritage, we can only have high expectations of them. Just recently, PAUL Boulangerie refreshed its breakfast and main dine-in menu with 26 new items from savoury mains to sweet indulgences. 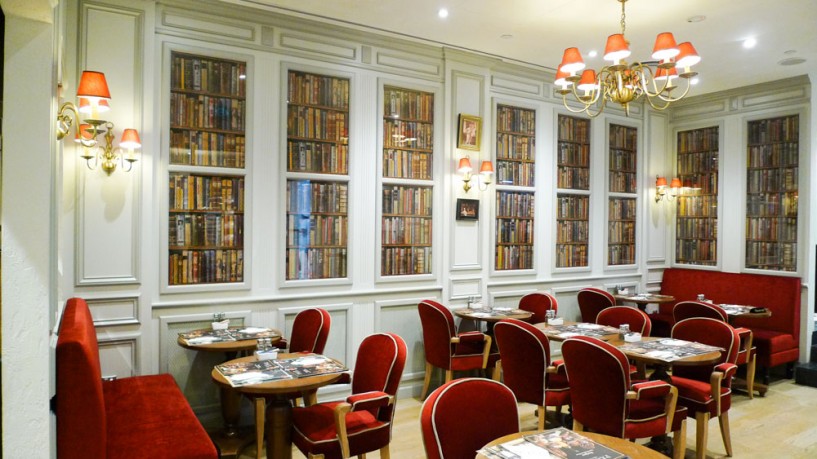 Like its other outlets, PAUL at Tanglin Mall is elegantly designed and contains a mixture of old and modern French touches. The classic French black and white checkered tiles and glass display counter reminded me of the time I spent in Paris, feasting on as many croissant and sourdough as I possibly could. The warm lit space is very welcoming and the luxe, bold red furnitures liven up the space. 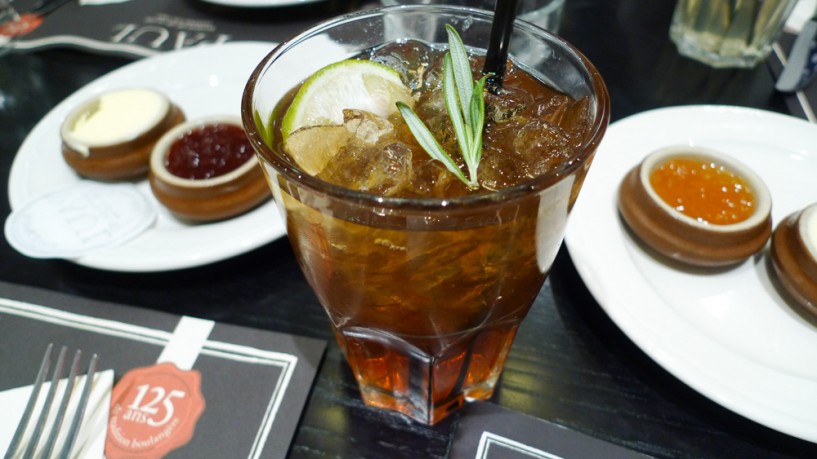 Rosemary lime iced tea ($7.50). Wanting to go for something more exotic and different from the usual, I selected the rosemary lime iced tea and I must say it sure is somewhat exotic. I mean I’ve had rosemary before in meat dishes but never in a drink and this drink definitely carries that distinctive aroma and flavour of rosemary. The lime tries to balance that flavour but it hasn’t entirely done what its supposed to do and could perhaps be a bit more sour. I would order this again just because I liked how different it tastes from the usual iced teas. 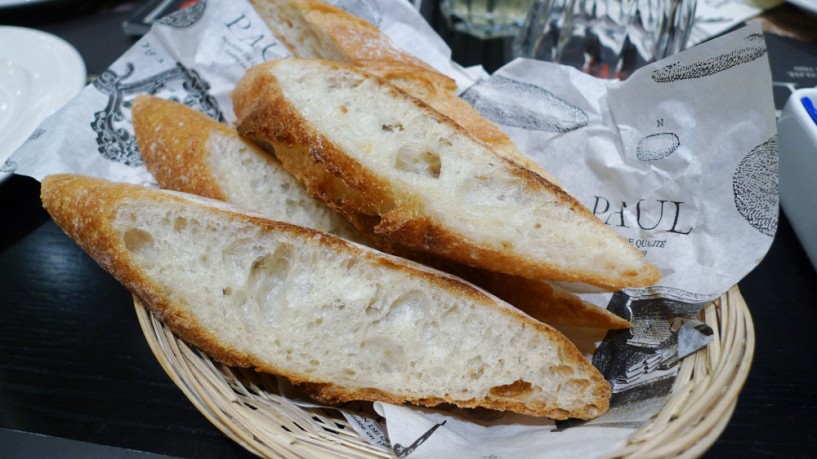 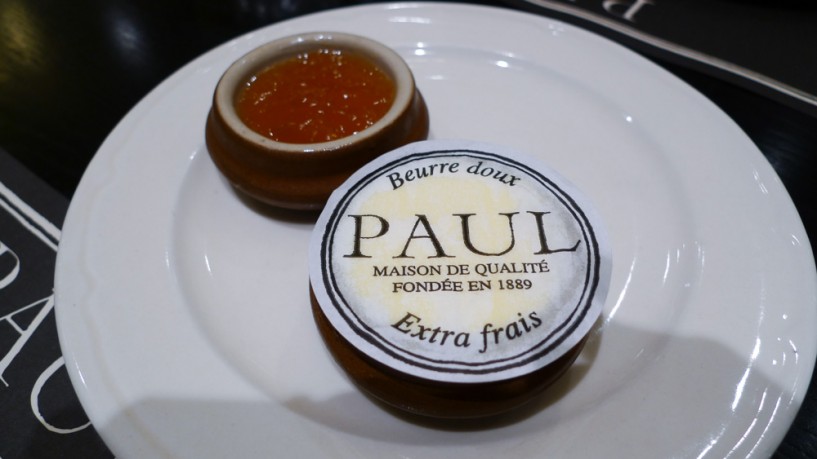 When it comes to French dining, one can always expect bread before food and at PAUL’s, we were served a basket of freshly baked bread with an accompanying pot of butter and jam. This butter is testament to why French butter wears the crown in the realm of dairy.

PAUL makes its own butter and in Singapore, their butter is directly imported from France. The simple butter slowly melts as you spread it on the bread, allowing you to savour all the subtle differences of the cream and salt. The high quality jam complemented the saltiness of the butter well. We kept going back for more jam and butter during the entire meal and could have easily continued if they didn’t clear it away. 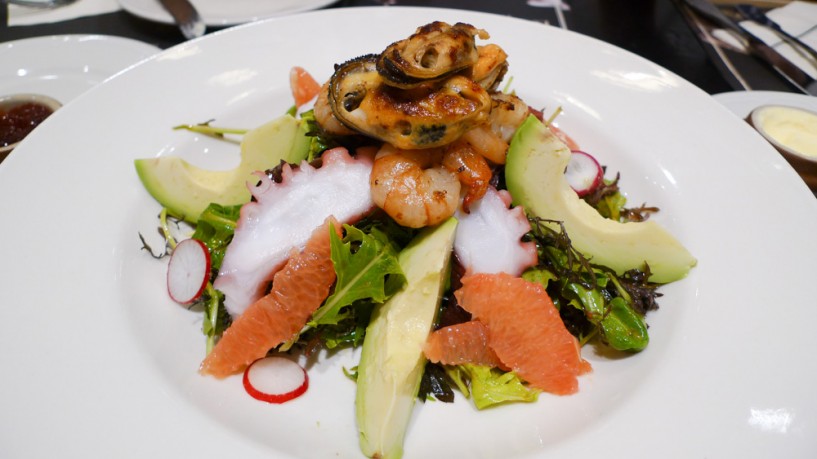 Salade de la mer ($20.90). The combination of the fresh greens, sautéed seafood, avocado, grapefruit and slices of red radish is quite an interesting one. This salad has so many textures and flavours that it’s like eating a kinder surprise – you don’t what toy you’ll get and in this salad’s case, you don’t know what texture and flavour you’ll get in your next mouthful. First, I tasted the wonderful marriage of refreshing citrusy grapefruit and crunchy prawns, then I was greeted with the pairing of the creamy avocado and tender, chewy mussel. An amazing combination of flavours that just won’t get dull. Tartine Boeuf ($19.90). Grilled sirloin steak on a bed of herb cream cheese, caramelised onions atop of country bread. Country bread, or Pain de campagn, is a traditional French bread – it has a hard crust with a soft, pillowy centre. For this dish, PAUL managed to incorporate the country bread with the beef and makes it easier to enjoy and share by slicing it up into bite sized portions. The grilled sirloin steak was tender and easy to tear apart, while the herb garlic gave it a pungent intense flavour that is further enhanced with the sweet caramelised onion. I enjoyed every bite of this tartine boeuf. 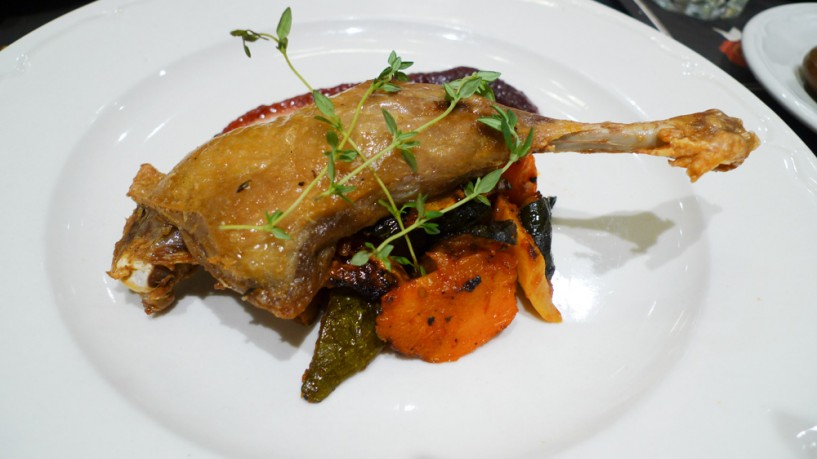 Confit de canard ($28.90). We were told that from kitchen to table, this duck confit takes a total of 48 hours to make. To ensure that the duck is well marinated, the marination process often takes 1-2 days. The herb marinated duck leg was pan fried to crispy perfection after being slow roasted. The crispy skin was a delight to indulgence in even though the duck meat was slightly tough. The saltiness of the duck leg is balanced by the accompanying sweet and tangy cranberry sauce and roasted vegetables. 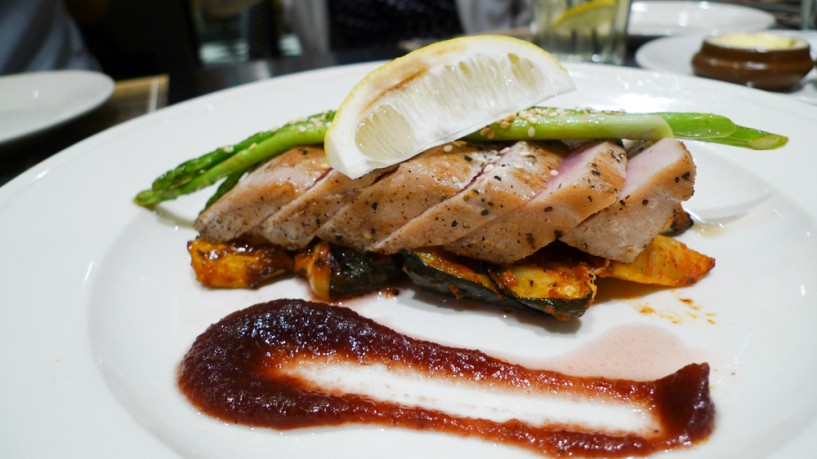 Longe de thon ($29.90). Seasoned tuna loin grilled to perfection served with roasted vegetables and seasonal cranberry sauce. Although slightly overcooked, the tuna still retained its silken texture and didn’t dry out, indicating the high quality of the tuna. The tuna was well seasoned and the sesame seed added a nice crunch and subtle fragrance to it. The sweet and tangy cranberry sauce also complements the tuna well, although it tastes equally good on its own. 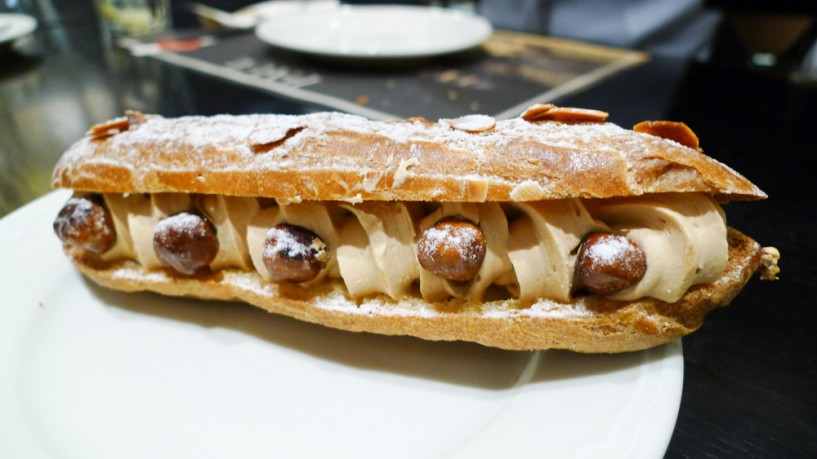 Eclair Paris-Brest ($7.50). The eclair was served chilled and the choux pastry was expectedly well done – light and yet holding its shape well. The hazelnut cream was made from fresh cream and resulted in a very rich and smooth hazelnut cream and when further topped with caramelised hazelnut becomes akin to popcorn. It could have been perfect if the hazelnut cream was softer or perhaps we should have let it rest longer under room temperature before gobbling it up so it softens up. Gaufre avec glace ($13.90). Instead of the usual waffle flat on a plate, PAUL present its waffle very differently from other restaurants, the waffle here is cut into two and then stacked against each other to form sort of a pyramid. The “pyramid” is held together by a scoop of vanilla ice cream. The waffle’s batter is made in-house and I liked how it turned out so crispy and airy. It’s so light that any girl can easily polish this off on her own unlike a huge plate of round Belgian waffle. 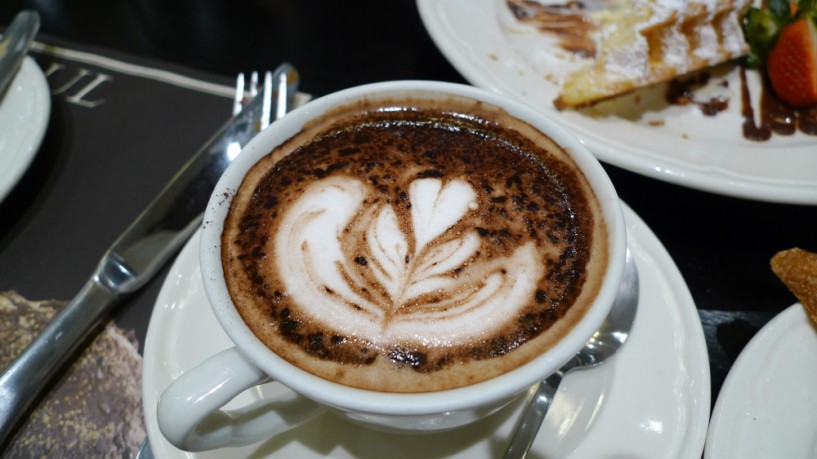 Marocchino ($7.50). I started the meal with tea and ended it with coffee. Marocchino is chocolate and espresso with frothed milk and I must say it really delivers a caffeine kick. The chocolate dispels the bitterness and acidity of coffee which makes it easy to drink, however, thanks to the caffeine, I only managed to sleep at 3am.

While I came with high expectations, I must say I wasn’t the least bit disappointed. Although not entirely perfect, all the dishes I’ve tried were more than just passable, it was good. PAUL Boulangerie’s love of good food and passionate commitment still lives on through its 125 years and that true rustic taste of France is evident in many, if not all of their food.