Thai food is loved by many as it is not only affordable but tastes absolutely amazing too. There’s always something for everyone, from rice and noodles to soups and curries. Penguin’s Kitchen caught my attention as they were a three-in-one concept.

Curious as to what that was all about, I headed down to Opal Crescent to find out. 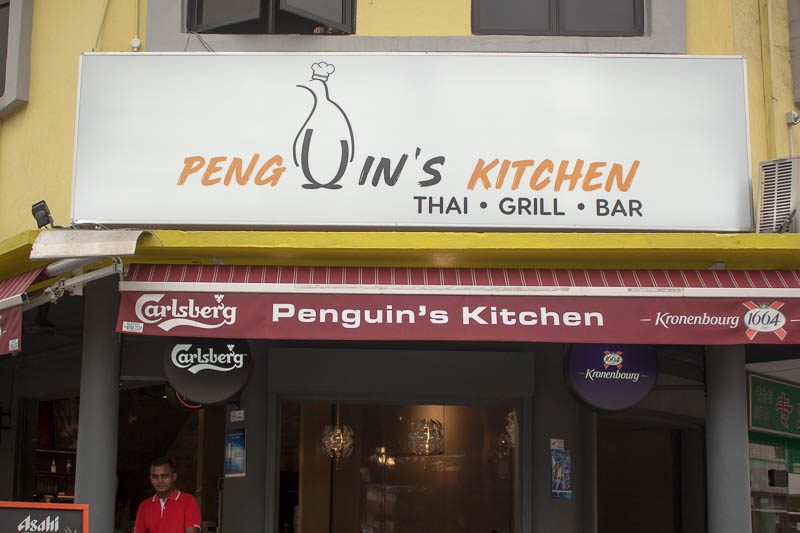 There are three concepts housed under Penguin’s Kitchen. One of them is Nanyuan Noodle House, a franchise outlet selling Thai wonton noodles with roasted meats. The other two are Thai Jing Jing which serves up authentic Thai cuisine, and Penguin’s Grill that focuses on seafood. Deciding to focus on one aspect of their extensive menu, I opted for Thai Jing Jing. 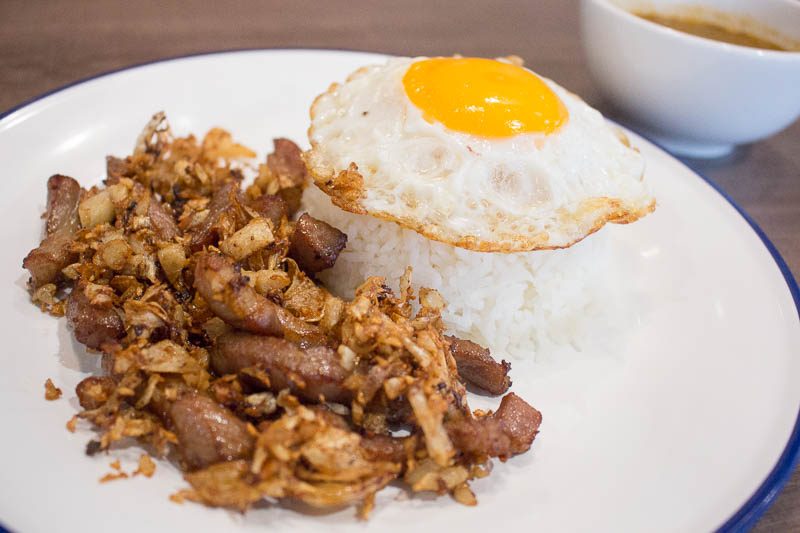 Under the recommendations of the lady boss, Pat, I had to order their famous Deep Fried Garlic Pork Rice Set (S$8). Their rice sets come with a fried egg and Tom Yum soup on the side. 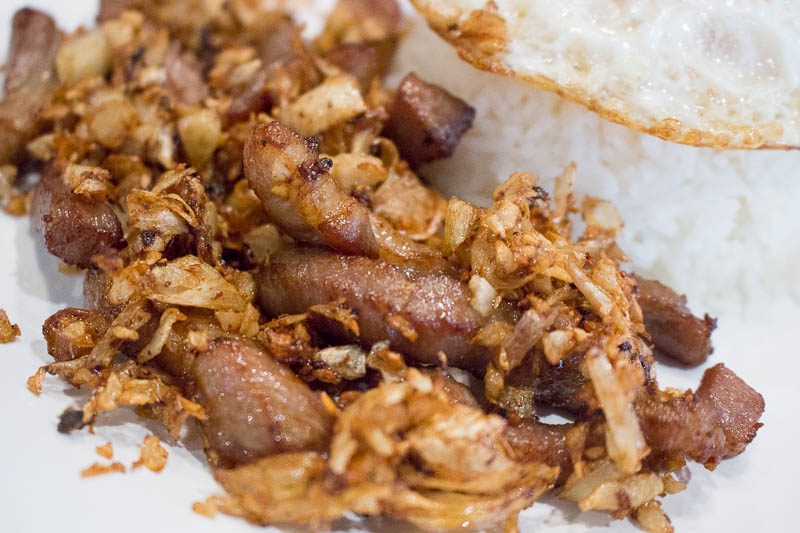 The fragrant dish smelt so good. There was a decent amount of thick pork strips, fried together with full cloves of garlic. The pork strips were glistening, with a light char on some of the garlic pieces. 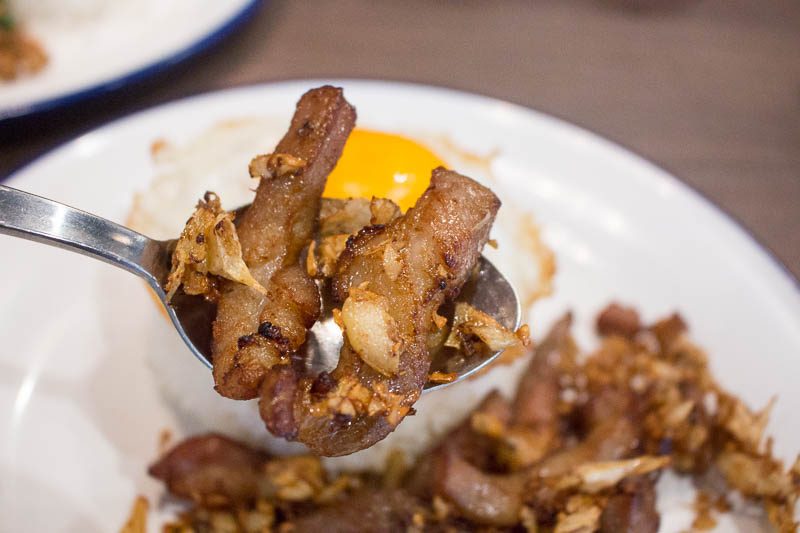 Taking a bite, I could immediately see how and why this was their signature. It was such a flavour bomb. The intensity of the aromatic garlic made it appetising indeed, which helped to cut through the richness of the pork strips. They were slightly on the fattier side but I wasn’t complaining as they were so tender. As I sliced into the yolk in the centre, I was pleased that it was runny. It coated the rice for a nice creamy mouthful. 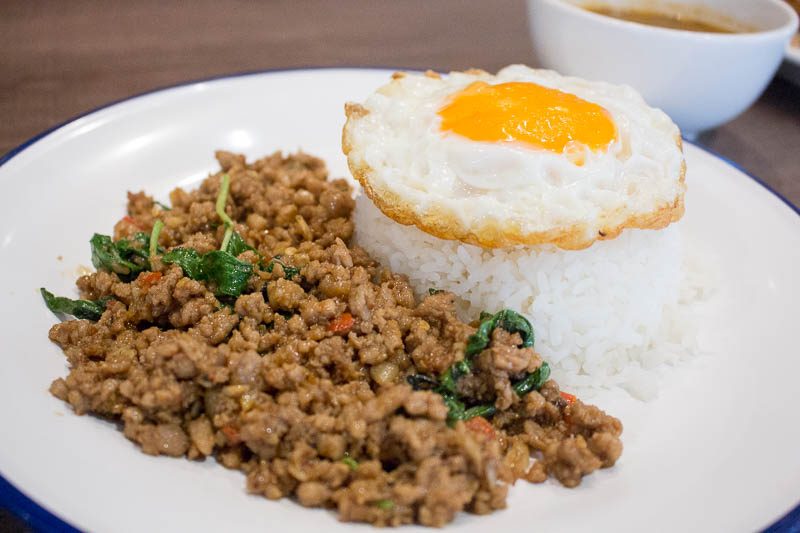 The second dish we got was the Stir Fried Hot Basil Pork Rice (S$8). I couldn’t go to a Thai eatery and not get their famous basil minced meats. They gave me the heads up that their spicy levels are of Thai standards. As I do not have the best spice tolerance, I requested for them to tone it down which I was glad I did. 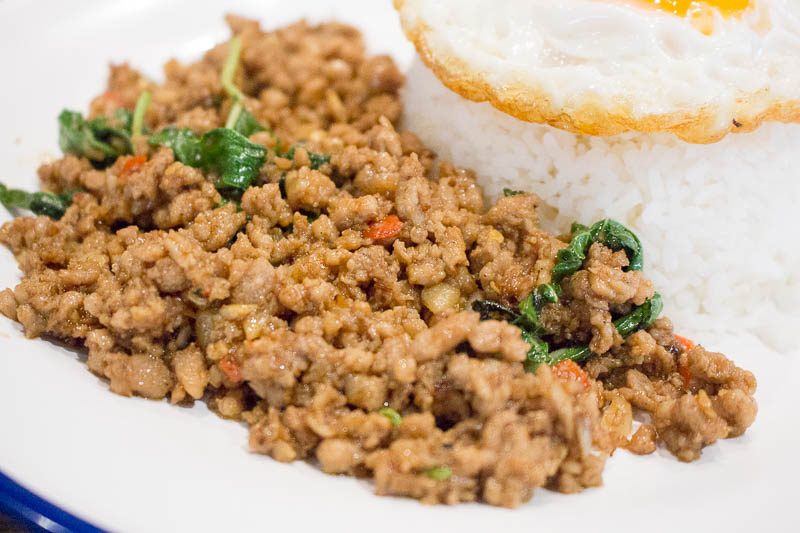 Their spices packed a punch indeed, even when I opted for a less spicy version. However, besides the borderline overwhelming heat for me, the dish had a distinct peppery and aromatic flavour. The base of the sauce was savoury, complementing the white rice as it soaked the flavours. 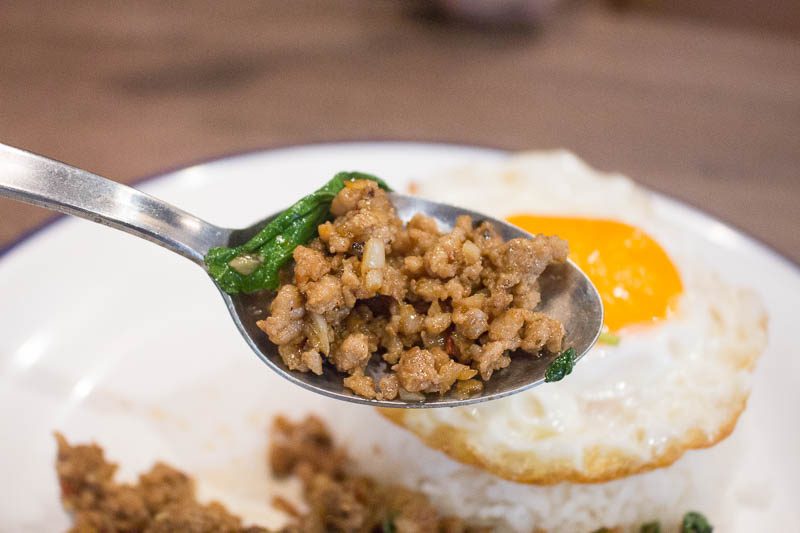 The minced pork itself had a good ratio of lean meat to fats, which gave it a nice and well-balanced bite. Those who love some heat would definitely appreciate this dish. We also decided to get Clear Tom Yum Soup With Seafood (S$15). It came with a plethora of seafood, which impressed me as it even came with mussels and substantial-sized prawns! 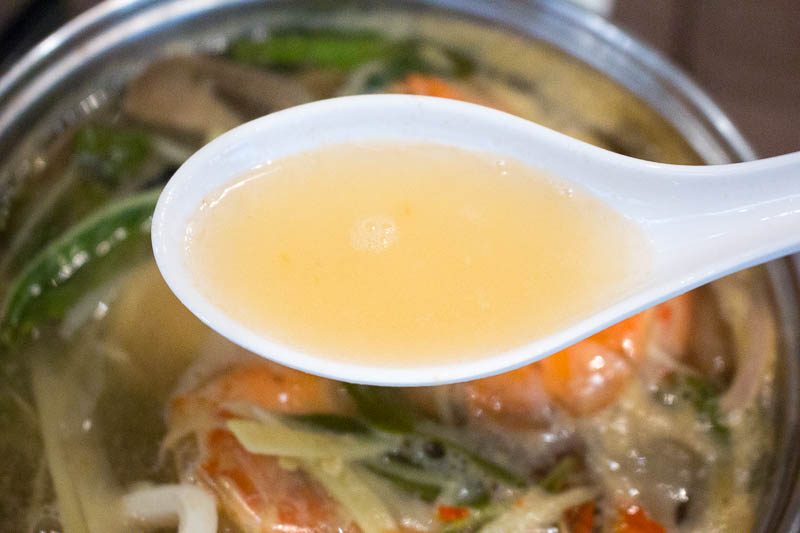 The soup itself was clear and light but packed with tons of flavour. It was tangy with just the right amount of spice to kick you gently in the throat but overall still refreshing and appetizsing. I found myself going for one spoonful after another. The prawns were pretty huge, and I liked that they were decently fresh and juicy. They tasted clean with a subtle sweetness, although the shell was a tad difficult to remove. 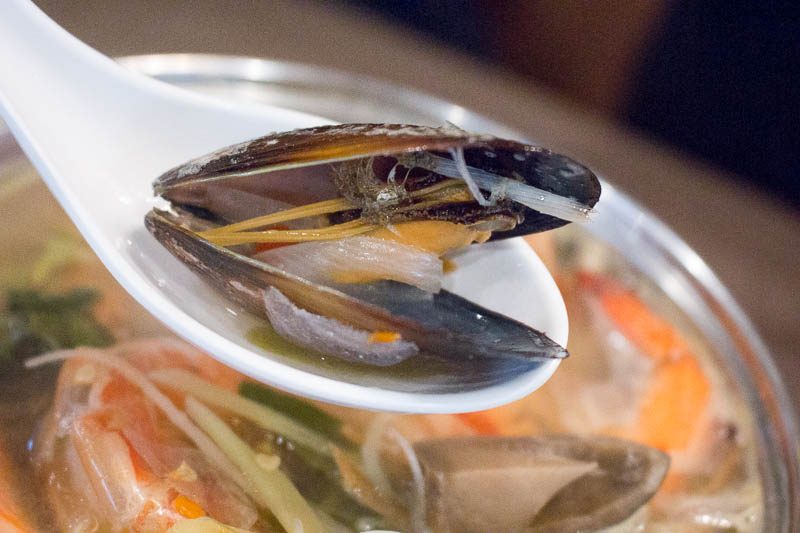 Unfortunately, the other two variants of seafood did not bid well with us. The mussels were tiny. But size was not the determining factor. More importantly, it tasted briny and fishy, which wasn’t the best. 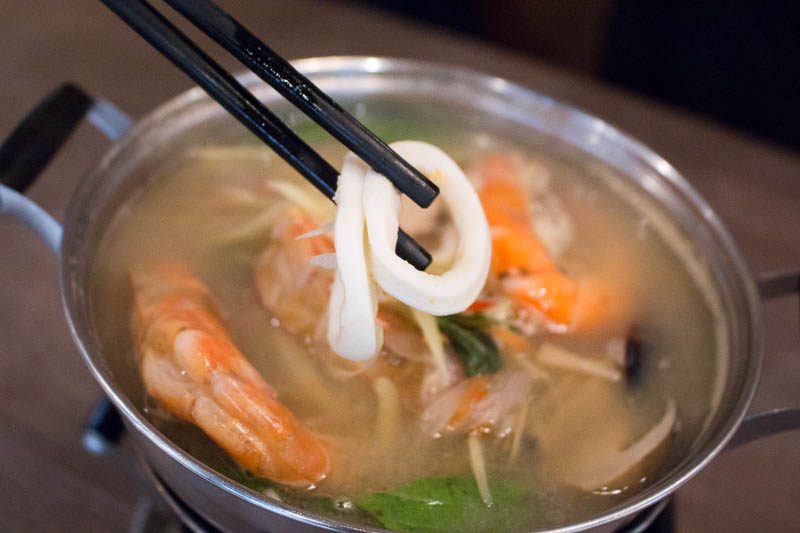 The squids weren’t up to our standards as well, for they were rubbery and tasteless. While I must commend their generosity in terms of the sheer amount of ingredients, perhaps the quality could be better regulated. 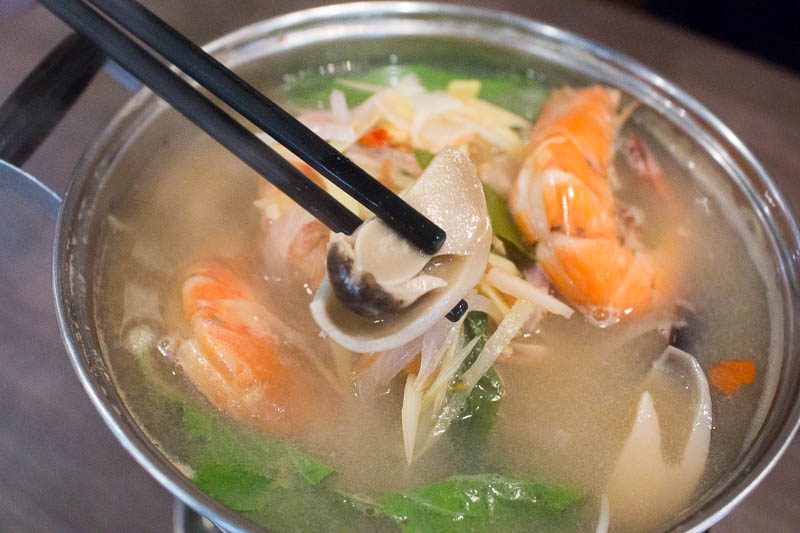 I did like the addition of mushrooms, which added a touch of earthiness to the dish which stood out amongst the other seafood ingredients. 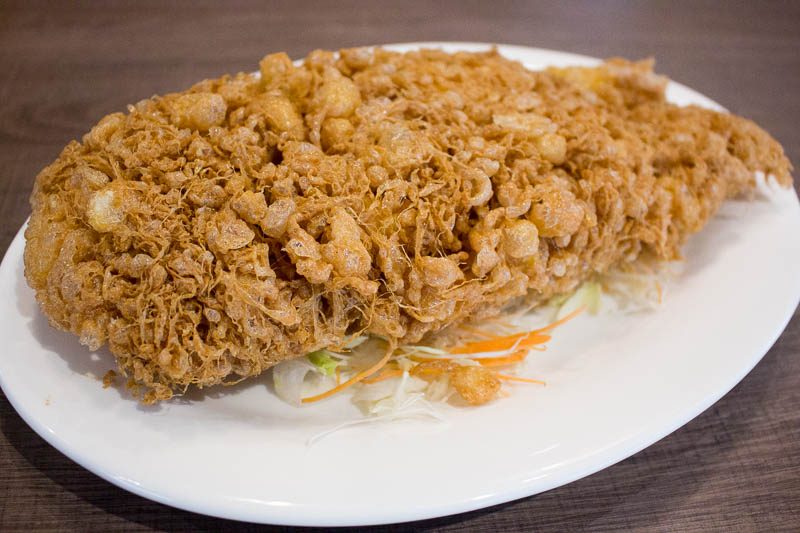 The last dish we got was the Crispy Omelette With Prawns (S$10). Eggs are one of my go-to order dishes, whether it is zi char in Chinese cuisine or poached eggs for English breakfast. Thai food was no exception, and I was eager to try this out as the table next to us seemed to enjoy it very much. However, the crispy omelette confused me slightly as I cut into it. Don’t get me wrong, it was definitely crispy indeed. It was fried to perfection, airy and light. However, I couldn’t taste the fluffy eggy element that is usually associated with omelettes.

Instead, it reminded me of fish floss, which is usually a complement to mains like fish soup. As a dish on its own, it was slightly weird. However, I did appreciate that it wasn’t overly oily despite being deep-fried. 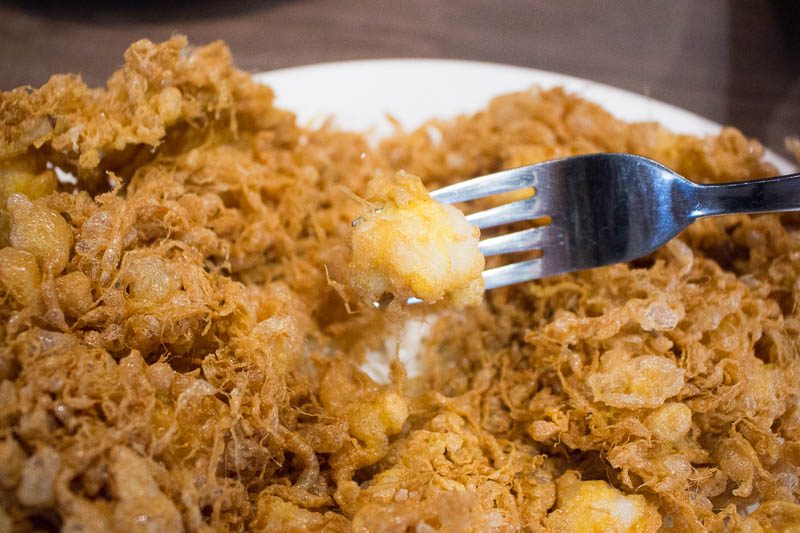 The lil’ chunks of prawns within the omelette were aplenty, but they didn’t help much to amp up the flavour. They added some texture though, which gave a nice bite to the dish. There were some hits and misses for me at Penguin’s Kitchen. While I have to admit it isn’t one of my favourites, they definitely do have some unique Thai dishes that are worth a try. They had items like Pineapple Baked Rice, as well as MAMA Instant Noodle Salad which I have never seen in any other Thai eatery.

The homemade drinks were pretty refreshing as well, although I did feel the lemongrass could be more pronounced. If you happen to be around the area, do give them a try and let us know what you think!