I’m a firm believer that the best comfort foods are the ones in kopitiams and hawker centres. However, recently, I discovered a cafe in the heartlands that specialises in artisanal gelatos. I had a good feeling about it, so I decided to check it out. 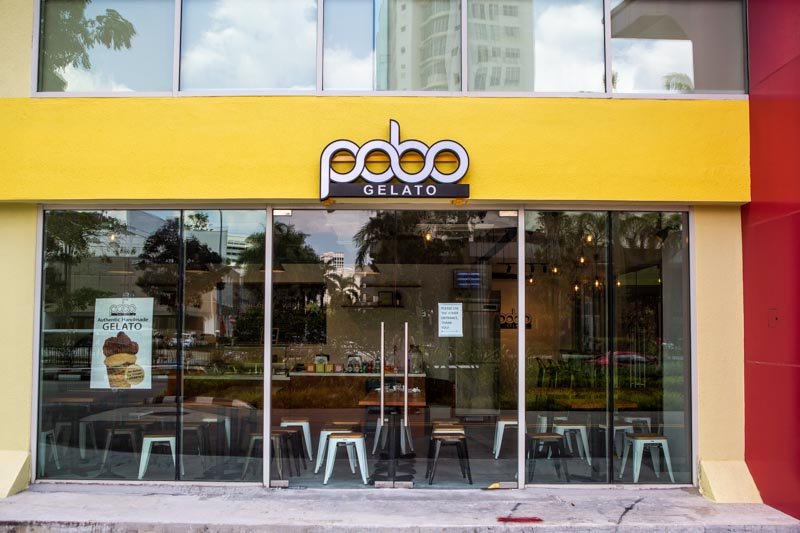 Located in the western part of Singapore, Pobo Gelato is a gelato shop in West Coast Community Centre. 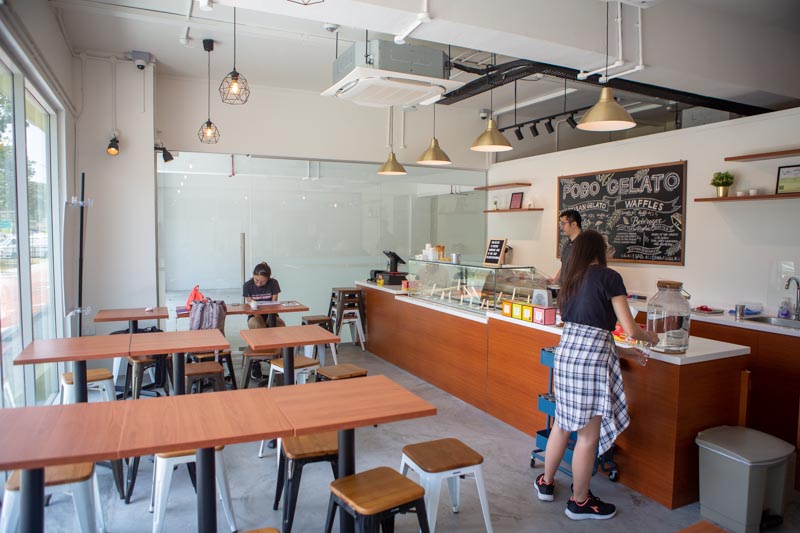 I bet you’re wondering, what’s a gelato shop doing in a place like a community centre? Well, there’s actually quite an interesting story behind it. 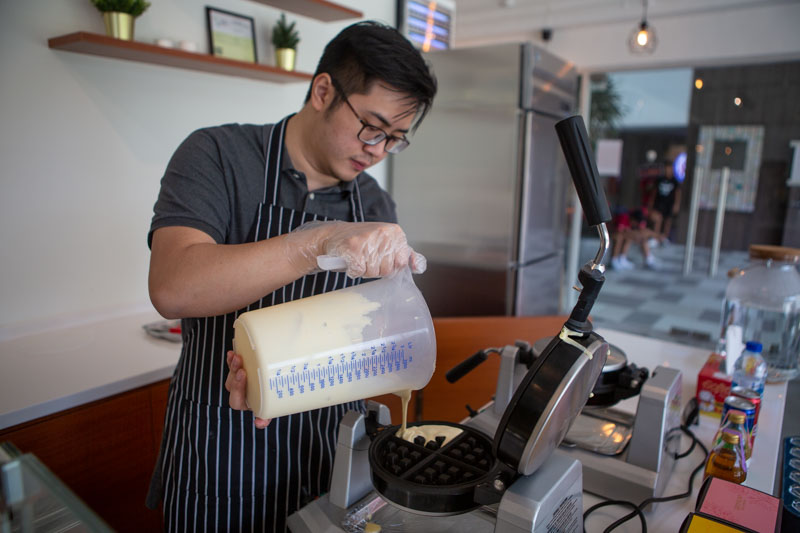 The owner, Damian, fell in love with the Italian cafes in Australia while studying there. He became particularly obsessed with gelatos. And before he knew it, he was in Italy mastering the art of making them.

In 2018, the finance graduate returned to Singapore to open his gelato shop. But instead of a livelier place, he chose to set it up in the heartlands of West Coast. Damian felt there was a lack of authentic gelato places in West Coast where he lives. Hence, he wanted to share his love for them with the residents around.

The small shop receives a good mix of students and office workers in the vicinity during the weekdays. On weekends, it’s a popular spot for families and young couples. 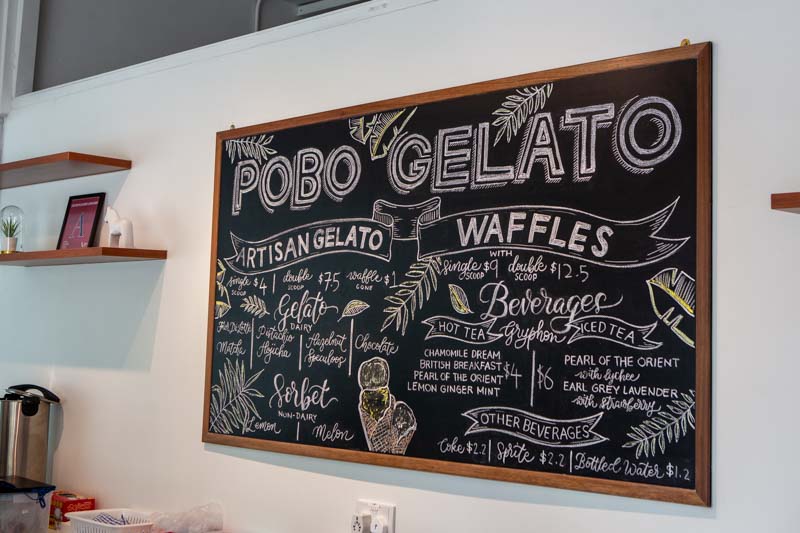 Damian churns out all his gelatos in his shop and makes them using pure ingredients. No artificial flavourings or colourings go into any of them. 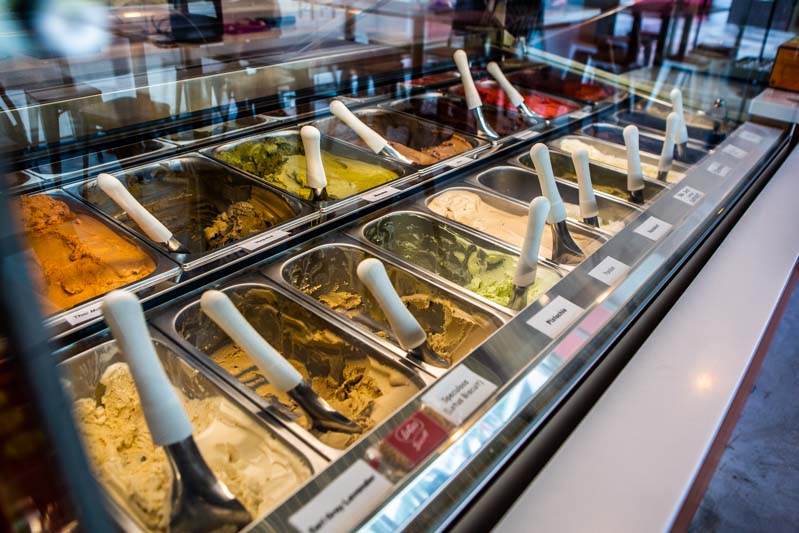 While Pobo Gelato offers a wide range of gelato flavours, the shop changes them up occasionally. We were in luck when we made our visit that week, as they were featuring two new flavours! The first was the Genmaicha (S$4 for single scoop, S$7.50 for double scoop, add S$1 for cone). With a pale green hue, I didn’t think much of the gelato as it didn’t look very appetising. 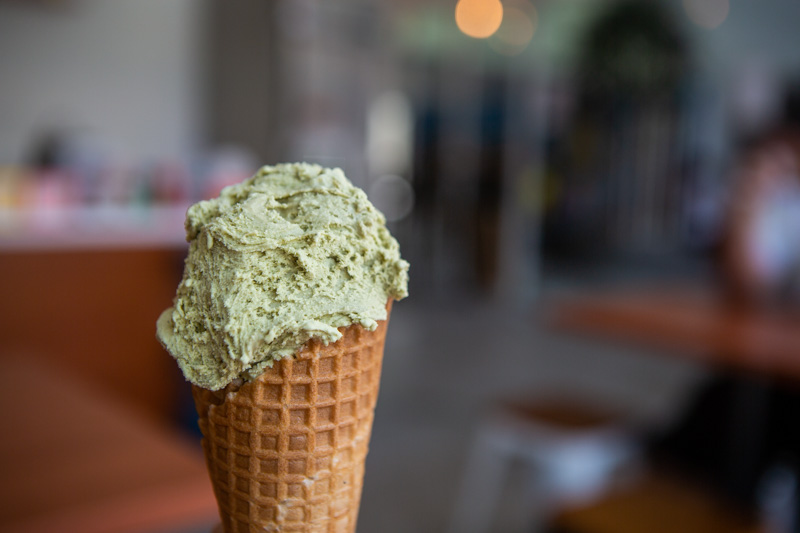 However, I was pleasantly surprised by the subtle hint of sweetness as a bitter tang took centre stage. We also picked out a very strong charred flavour. 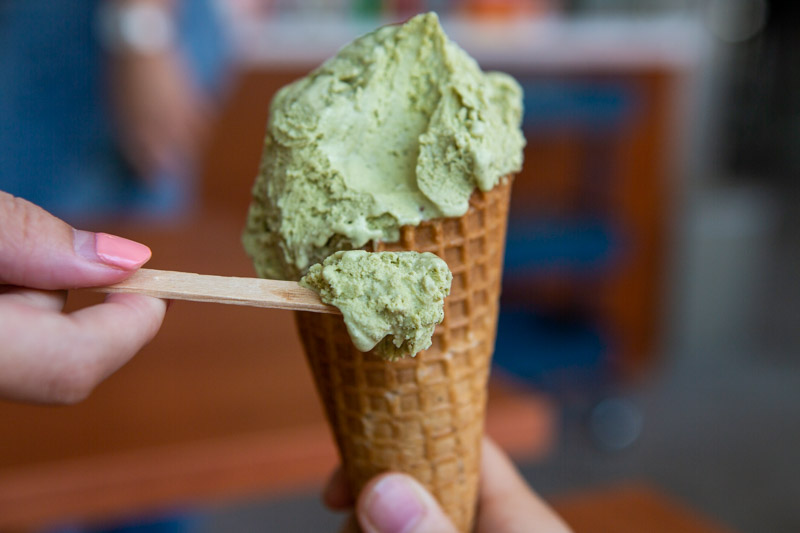 Damian explained that he made the gelato using matcha and roasted brown rice, which is why there was such a strong bitterness. It also explained why the gelato had a grainy texture!

For those of you who love green tea, there’s also the Hojicha (roasted green tea) and Matcha gelatos. One of us who wasn’t even a big fan of matcha found them palatable, so definitely give them a try! 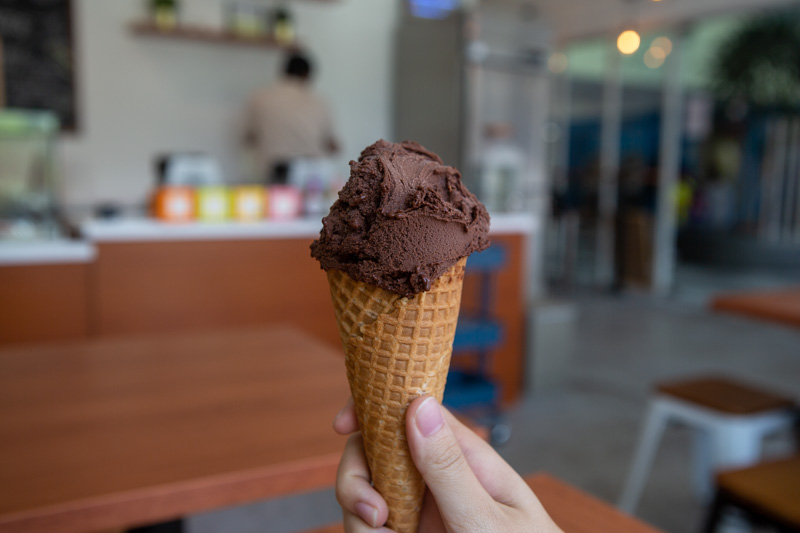 The other new flavour was the Chocolate (Sorbet). It was the non-diary version of the 70% Dark Chocolate, one of the shop’s most popular flavours. We also tried the original 70% Dark Chocolate but found it very rich with the addition of milk. We preferred the other items as the flavours were less jelak. Damian also recommended the Hazelnut, one of the hit flavours.

I’ve had many hazelnut-flavoured desserts before but most of them tasted artificial. As such, I was low-key sceptical about it. However yet again, the gelato proved me wrong. It had a very strong milky and nutty flavour and we thought it tasted exactly like a bar of Kinder Bueno. 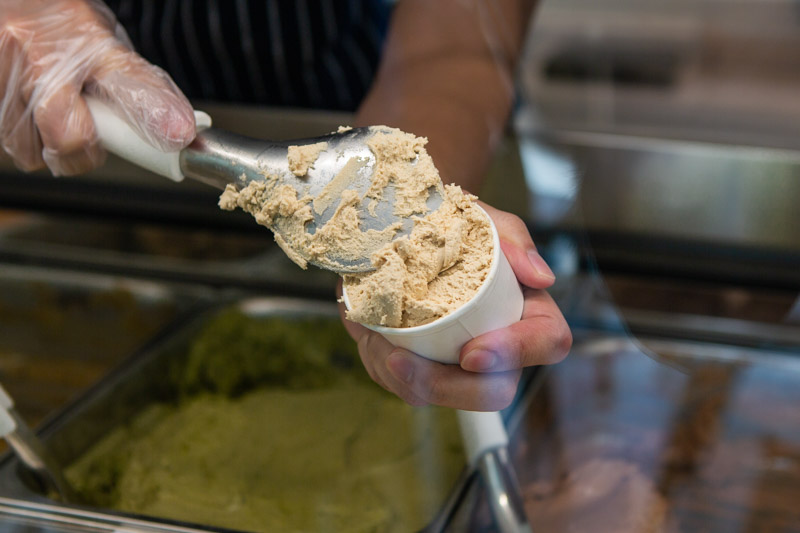 Also, even though we tasted hazelnuts, we couldn’t find any actual hazelnut bits at all. But it certainly tasted like the real thing!

After trying both, we were split between the Hazelnut and Chocolate (Sorbet) for our favourite flavour. 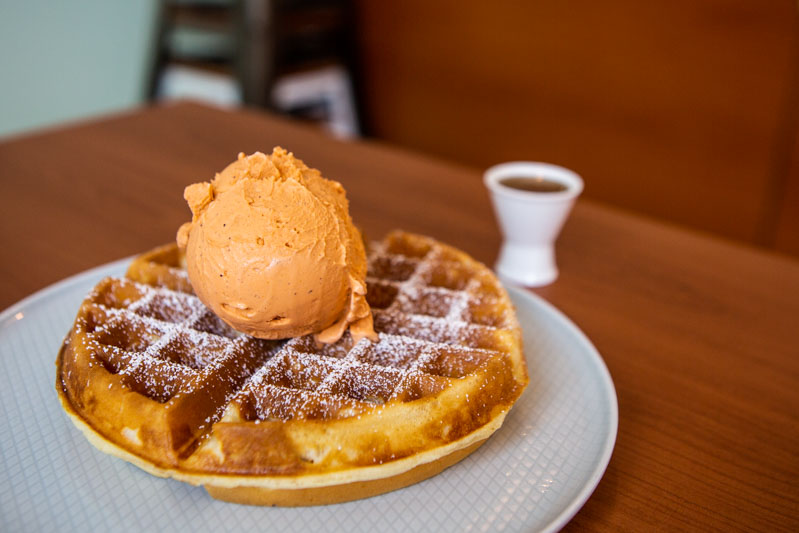 We also couldn’t miss the Waffle (S$9 with single scoop, S$12.50 with double scoop) since Pobo Gelato makes it fresh-to-order. We chose a more unconventional gelato flavour, Thai Milk Tea, to pair with the waffles. Our mouths were watering as Damian prepared the waffle right in front of us. It also didn’t help very much that the eggy aroma of the waffle batter wafted to us. 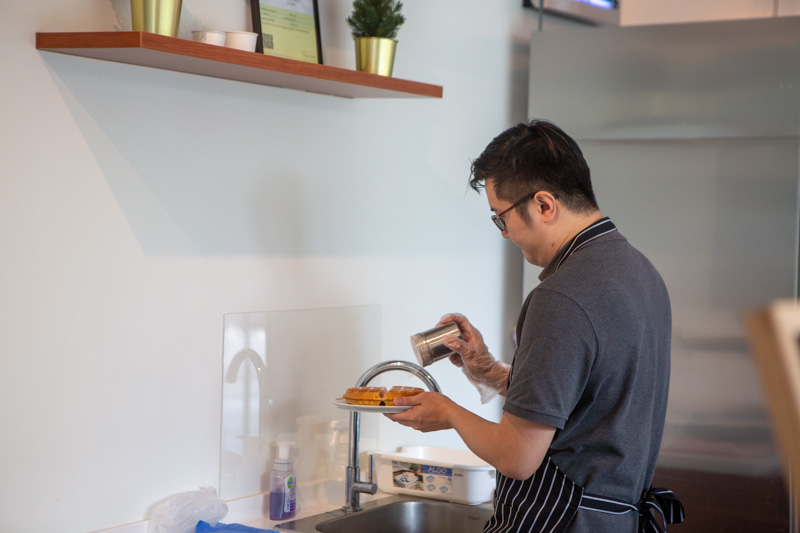 Once the waffle was ready, a sprinkle of powdered sugar went over it, followed by a scoop of gelato. 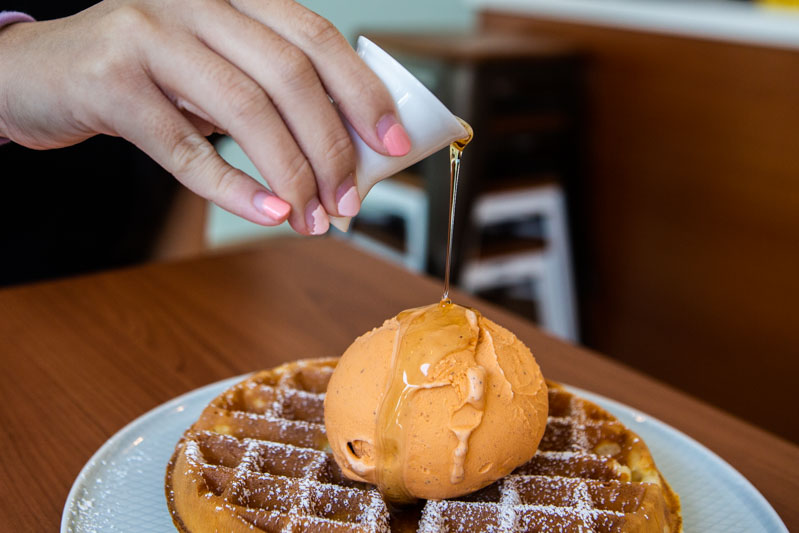 The sheer thickness of the waffle captured our attention, and it also came with a shot of maple syrup, the quintessential waffle condiment. 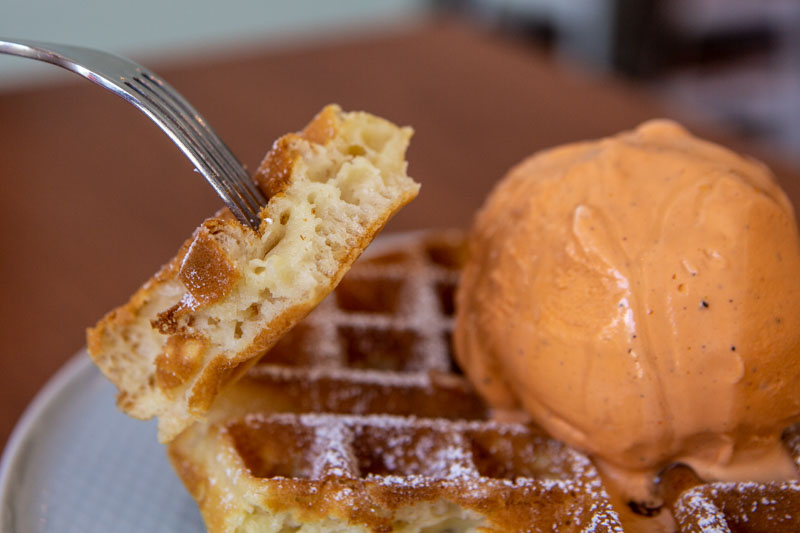 With a golden-brown hue, the waffle was firm and satisfyingly crispy on the outside. In contrast, it had a perfectly moist and dense interior, exactly the way I like my waffles. As for the Thai Milk Tea gelato, it was definitely reminiscent of the drink. But we agreed it still didn’t top the Hazelnut or the Chocolate (Sorbet). That said, together with the freshly-made waffle, the two made for a perfect complement of textures and temperatures.

Compared to typical hipster cafes elsewhere, especially in town, the prices here at Pobo Gelato are definitely much more wallet-friendly. Furthermore, with so many flavours and new ones releasing periodically, you can be sure there’s something for everyone.

So if you’re craving something cold and affordable to counter the sweltering heat, you know where to go!