Rumah Rasa: Indomie Noodles Are Elevated Into Unique Dishes At This Indonesian Restaurant In Bay Hotel

Ever thought that your beloved Indomie noodles would make it onto the menu in a hotel restaurant? Halal Indonesian restaurant Rumah Rasa in Bay Hotel has recently launched an entire series of new menu items featuring Indomie as the star ingredient. 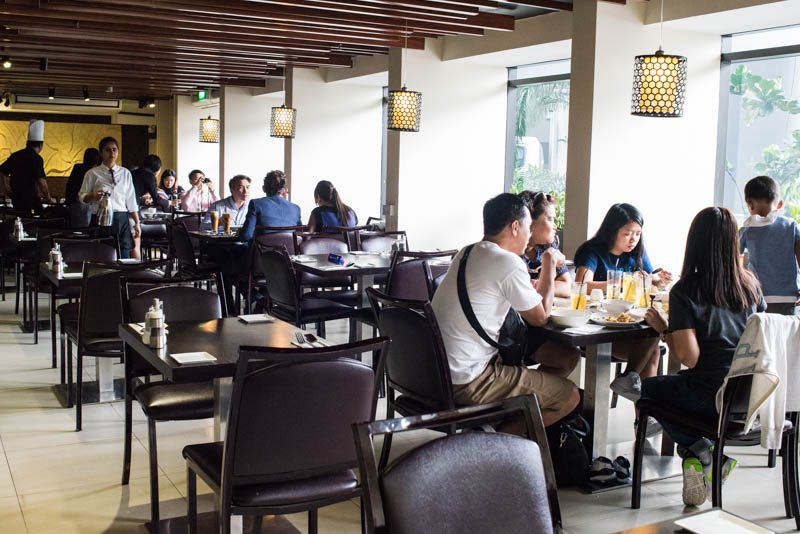 From the outside, the place looks nothing like a restaurant, with a design similar to that of an industrial office. I was glad to find that the interior was a stark contrast, almost like entering into a different dimension.

With an alluring aroma wafting all around me, I found myself desperate for lunch to start. 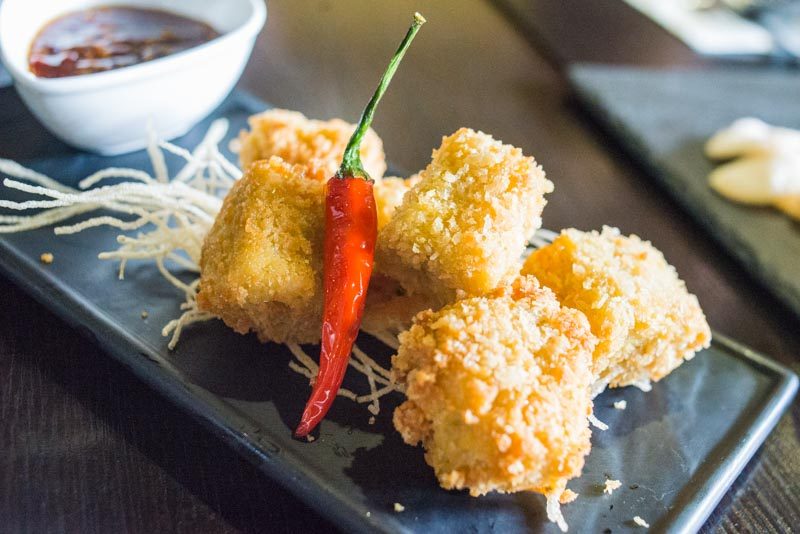 I went straight for the appetiser, Crispy Indomie Nuggets ($7.90). Believe it or not, these nuggets are actually made of Indomie noodles, well, that along with carrots and onions.

The Head Chef explained that the noodles and the vegetables are steamed and blanched, and subsequently coated in a batter to mould them into shape. Then these little mounds are baked, before they’re finished off in a deep fryer. I really liked the texture of the nugget; it was soft and chewy, plus the noodles weren’t mashed and still held their form. The nugget on its own was a little bland as the noodle-veggie combo did not carry very strong flavours.

The Chef’s Special Sauce which was served alongside the nuggets made all the difference. It was a thick, spicy peanut sauce, with a piquant flavour that really did elevate the dish. Double dipping in this case is very much encouraged! 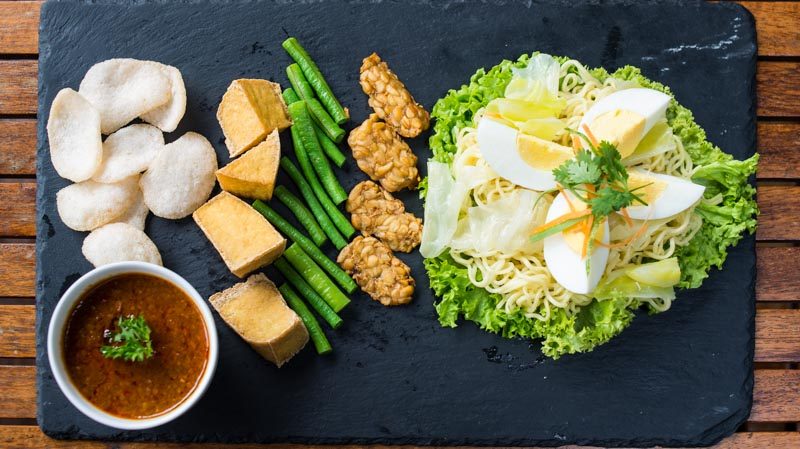 I was then served something a little lighter on the palate, Tossed Gado Gado Cold Indomie ($8.90). This is the sort of salad I can really see myself getting into.

It was served like a deconstructed bowl of noodles with sides of tempeh, tofu, french beans and keropok. 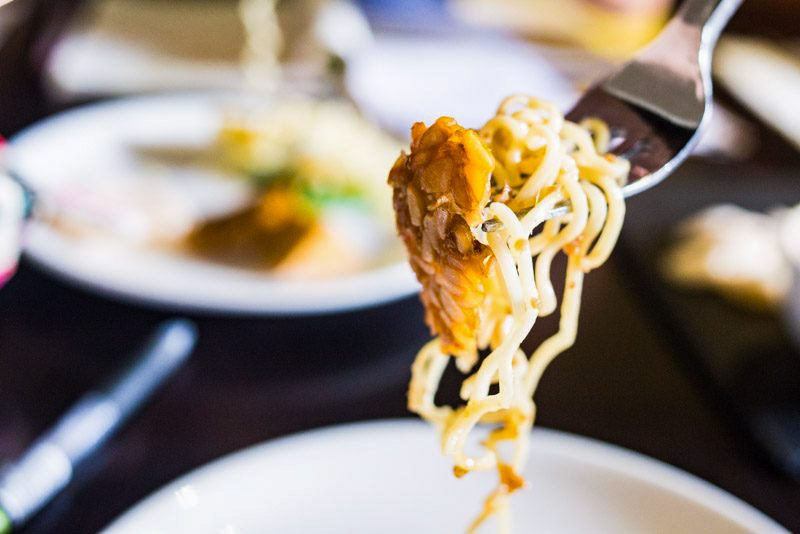 The Gado Gado sauce is meant to be poured onto the noodles and then tossed, but knowing how messy of an eater I can be, I elected to dip the noodles into the sauce and ate them like how you would eat soba.

The sauce tasted quite similar to satay peanut sauce with added spices. I particularly enjoyed how the spices in the sauce weren’t too overwhelming and tasted sweet with a hint of sourness – very complementary to the more mellow taste of the noodles and sides. I was craving for something a bit more hearty by this point, and hence decided on the Homemade Begedil Soto Ayam Indomie ($7.90). The broth was pretty unique and tasted ‘cleaner’ than what you’d normally find in other Soto Ayam dishes.

The begedil was my favourite component; it was lightly-fried and tasted very homemade, with chunks of potato instead of smooth mash. This dish was simple and tasty but it certainly wasn’t the best of the day. If you love chilli crab sauce to the point where you can basically have it with anything, you’ll love this next dish: Indomie In Chilli Crab Sauce ($9.90). A single deep fried soft shell crab was nestled on a bed of Indomie over a pool of thick chilli crab sauce.

The noodles tasted as though they’d been marinated in the spicy tangy sauce, and held so much of the chilli crab flavour that I struggled a little bit after a few mouthfuls; the spice level was no walk in the park.

I admittedly had to have the waitress perpetually on standby to refill my glass of water as I sampled the dish. Proceed with caution! The crab was perfectly crisped, but I found it a little salty and the flesh slightly mushy. 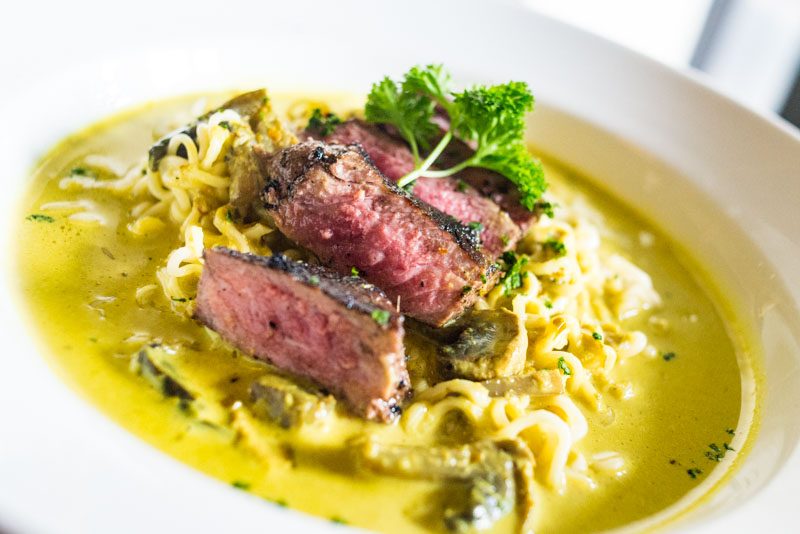 I ended the meal with yet another dish from the noodle selection, the Beef Stroganoff Button Mushrooms Indomie Served In Lemak Chilli Padi ($9.90).

Each bite was filled with a heavy, milky coconut taste, followed by a spiciness characteristic of Lemak Chilli Padi sauces which definitely lingered on my tongue. This was great for the first few bites but as with all creamy dishes, can get rather jelak after awhile.

Also, the beef could have been softer and less rubbery; I spent half the time struggling to cut the slices into smaller portions and the other half chewing on them. I do hope they mellow out the strong flavours of the Lemak Chilli Padi and revise the cooking method of the beef as this dish has so much potential!

Rumah Rasa serves up Indonesian cuisine that’s big on flavour with a homely twist. The dishes were a bit of a hit-and-miss, but I especially liked the Indomie In Chilli Crab Sauce, which had really unique flavours.

If you’re bored of normal Indonesian cuisine (or you just LOVE Indomie), Rumah Rasa’s affordable prices make it worth a visit!