Rumour has it that one of Bali’s hottest bars has just set foot in Singapore. It came, it saw and it conquered my heart. Here’s why Rumours Bar & Grill is THE bar to be at right now. Opened at Holland Village, award-winning Rumours Bar & Grill stands out among the throngs of bars there. With their chic neon lights, live music and cosy seating, you could chill out here like you were in Bali.

We wanted to start off light, but Rumours Bar & Grill wouldn’t have it. It isn’t the kind of bar that gets by with small tidbits like truffle fries. 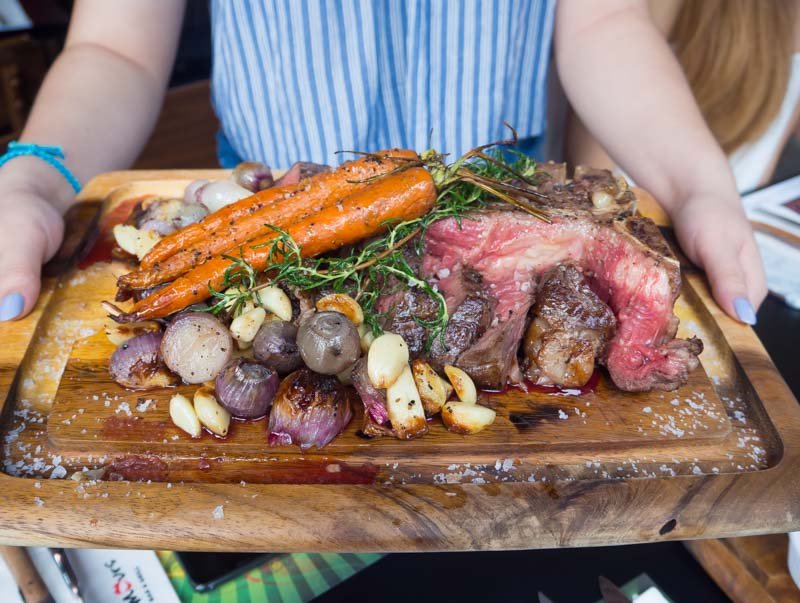 Instead, the food here is hearty, like their signature 1.2kg Fiorentina Bistecca ($89.80++). A whopping 1.2kg prime cut of Australian Black Angus beef, this plate is every meat-lover’s dream. 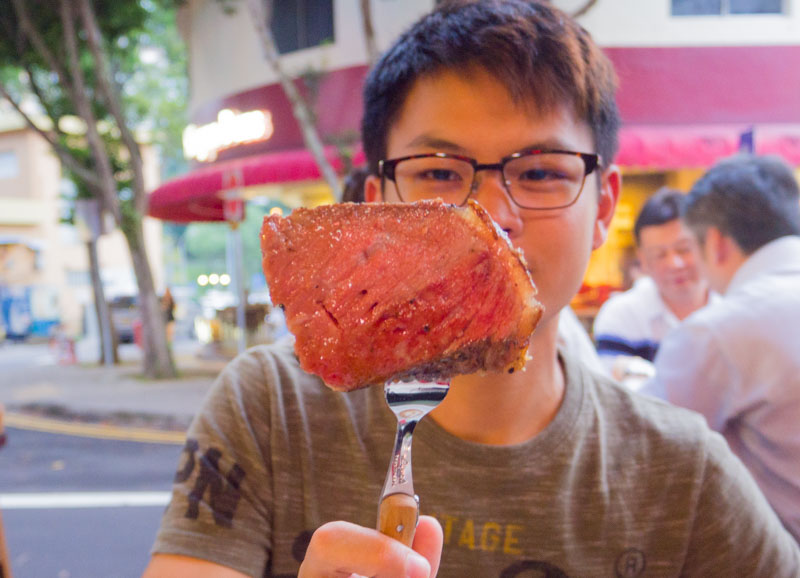 This sharing plate is good for two to five people, depending on how much you can eat.

The meat itself was cooked an even medium rare throughout. Sous vide and grilled, each bite was oh-so-tender and oozing with delicious juices. The well-seasoned meat may be great and all, but here’s a piece of advice. Quickly chope one of the three carrots that were caramelised to perfection. With a bit of sweetness and crunch, you’ll be chomping these carrots down, non-stop. At the end of the day, Rumours Bar & Grill is still a bar. You’re not going to believe the surprises they have in store for you. You should start off the meal with something light, like this sexy cup of Smoky Seduction ($18++). Pop open the inverted glass jar and try to capture a cool Insta-video of the smoke escaping!

While deceptively simple, there was a lot going on in this white rum-based cocktail. The stick of cinnamon itself is perfectly positioned at the rim such that you get a whiff of smokiness first as you lean down for a sip. With a touch of elderflower liquor, each sip was brimming with sweet floral notes that were very refreshing. Next on the menu was this massive German Platter ($59.80) overflowing with German favourites such as pork knuckle and veal escalope. True to European portions, this plate definitely gives you value for your money.

My personal favourite was the pork sausage that was really tender and moist to the core. This platter will also have fans of pork knuckle jumping for joys. While a tad dry, each piece of pork was fatty enough and covered with sinful crackling skin. This will wreck anyone’s diet! 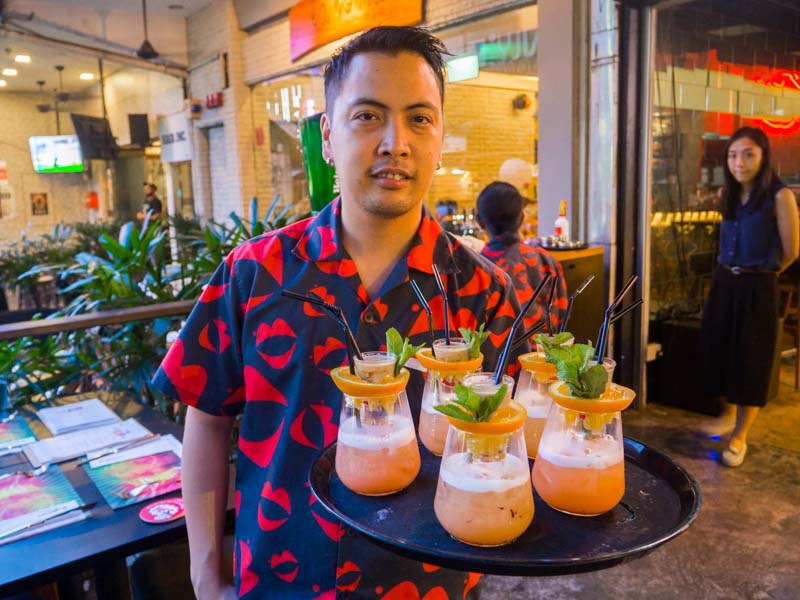 With the main course, you’ll need something a little stronger. This next bombastic booze is literally two drinks in one, hence the name Two Lovers In One Band ($18++). The shot glass is a strong mix of Bailey’s, peach liqueur and grenadine that tastes a little like a mudslide, while the pink cocktail is Bombay Sapphire gin mixed with fresh plums and apples for a tangy finish.

How do you drink this? Put the two straws in your mouth and sip from both cups, at the same time! Disclaimer: Don’t try to act step and pour the shot into the pink cocktail. Enjoy it the way it’s meant to be drunk. My favourite dish of the night was Rumours Bar & Grill’s Grilled Cheese Burger ($12.80++). Might be odd that their best dish is a classic burger, but this burger is the bomb. Topped with cheese done two ways (oozy melted cheese and a smoky grilled cheddar crisp) this dish was full of savoury aroma.

The beef patty bursting with juice and flavoured the soft buttered buns perfectly. Cheap, flavourful and well-portioned — I don’t think I’ve been in love with a burger this much before! Another more budget-friendly plate is Rumours Bar & Grill’s Carbonara ($14.80++). The tagliatelle was cooked al-dente — soft with a bit of chew, and perfectly sized for scooping up the cream sauce.

Unlike some carbonara that I’ve had, their rendition was cheesy and full of garlic aroma, yet not too cloying. Sip on an after-dinner cocktail called Motif ($18++) to get past the food coma. Although I suspect this alcohol-filled medical syringe was designed to knock us out completely.

Time for your shot! The syringe was filled with Bailey’s and Kahlua coffee that was balanced out by the fruity whisky-based cocktail in the copper cup.

If you’re brave enough, squeeze the shot into your mouth and finish it off with a sip of the cocktail. The creamy shot will bring forth a chocolate sweetness, which is then perked up with the zesty notes from the peach and orange in the whisky. Are you game for this?

I think there has always been the stigma that bar food can’t be good. Rumours Bar & Grill definitely took this misconception and threw it on its head! While some of the sharing plates may be a bit of a stretch for the wallet, the hulking portions (1.2kg!) actually are affordable if you pool together a couple of friends.

The cocktails themselves were so much fun! Priced reasonably at less than $20 a drink, I definitely wasn’t expecting all the Inspector Gadget-typed gizmos served together. We had a memorable night there, and I’m sure you will too.

Don’t believe the rumours that the bar is good, come see for yourself!