While I was scrolling through Facebook, I chanced upon Shi De Fu on the Hawkers United Facebook Group. The bustling group serves as an avenue for hawkers and restaurants alike to promote their food and online delivery options to combat the ‘Circuit Breaker’ measures.

The pictures this shop posted caught my eye as they looked really appetising, galvanising me to give it a shot. In fact, they were inundated with food delivery orders that it was listed that their Curry Chicken Noodles were sold out for the weekend. 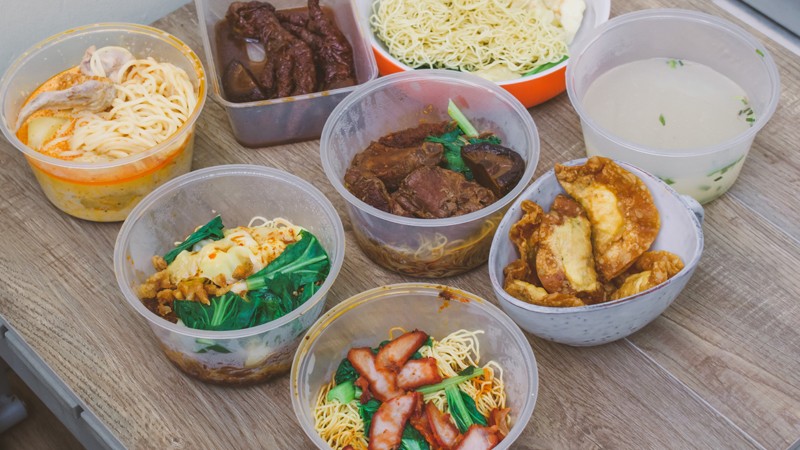 Located at Geylang Bahru, this shop was established in 1974 and gained a foothold with its delectable wantons and dumplings. Helmed by Uncle Tang and his wife, Shi De Fu offers a myriad of noodle dishes ranging from Wanton Mee to Pork Ribs Noodles. 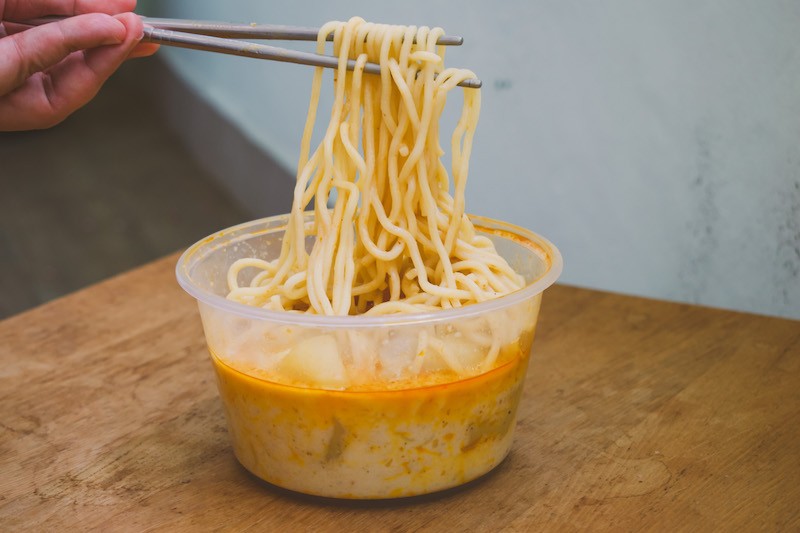 The Curry Chicken Noodles were packaged separately, ensuring that their perfectly cooked noodles retained its texture.

The chicken was tender, swimming in a medium-bodied and mildly spicy broth. Texture-wise, the broth was light and creamy with a nice balance between the gravy and soup, with an added subtle sweet flavour. I noted that the flavour of the broth leaned towards the lighter side, which I would have very much preferred it to be slightly more intense and full-flavoured. However, if you prefer relishing in something not too heavy, this would be a suitable choice. 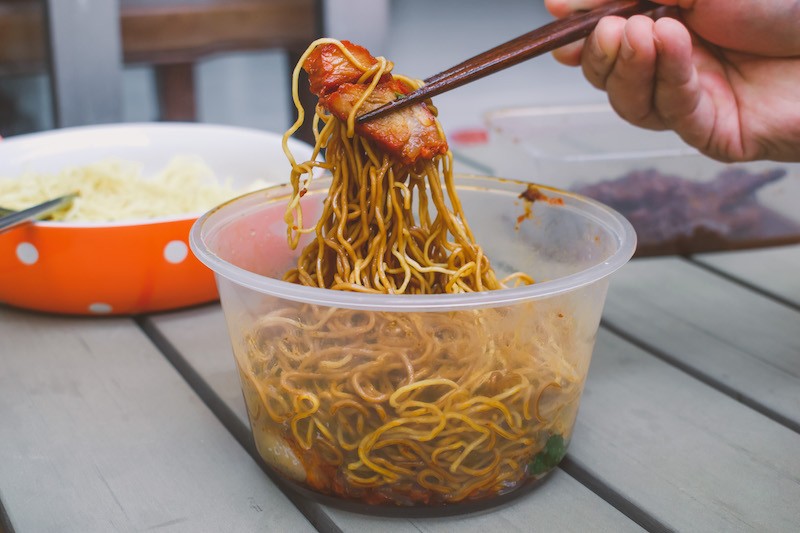 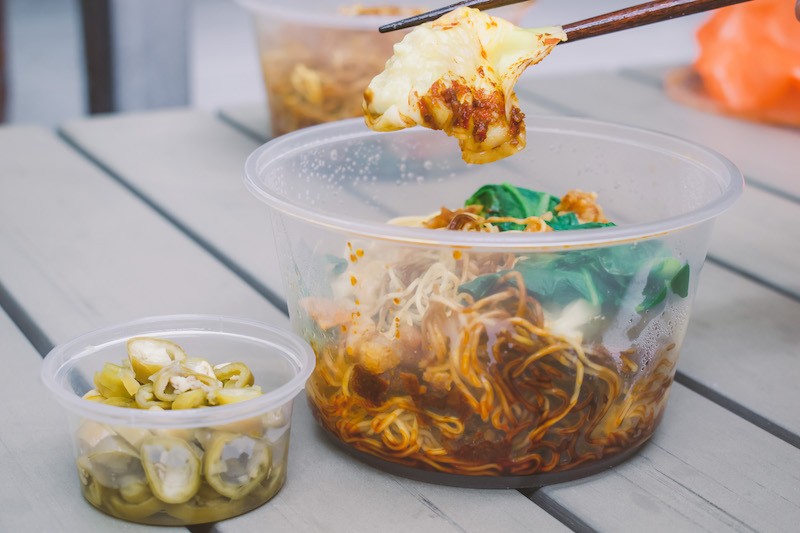 I opted for two servings of the mee kia noodle cut with different toppings.

Both the Dry Wanton Noodles and Dry Dumpling Noodles were lightly doused with black sauce and chilli. It was served al dente, firm and springy with a nice bite. The Dry Wanton Noodles was completed with slices of char siew and greens, while the Dry Dumpling Noodles was complemented with dumplings. After a thorough toss to coat each component of the dish with the sauce, I was greeted with piquant spiciness.

The chilli really amped up the dish and for a spice-lover like myself, I still felt that it was exceptionally spicy which might have overshadowed the dish as a whole. The char siew slices were generally lean and were coated with a tinge of a sweet-tasting marinade. It was tender, however leaning towards the drier side.

On the other hand, the fillings of the dumplings were generous and had a good bite to them. They were plump and succulent, with a bounce to every bite. 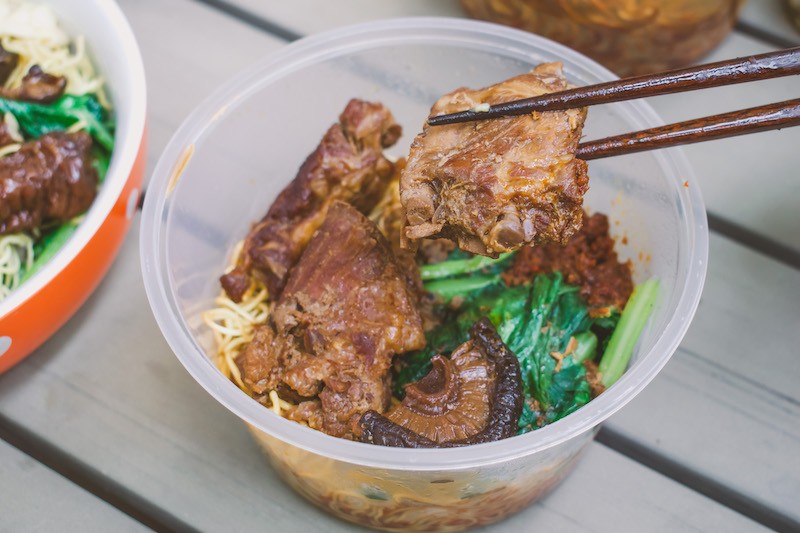 The Braised Pork Ribs Noodles were complemented with chunky pork ribs with an Asian flair. The noodles similarly, had a standardised texture which was cooked al dente with a prominent eggy texture. The mushrooms absorbed the flavourful flavour of the sauce and tasted earthy, flavorful and rich. As I sank my teeth into the pork ribs, I was immediately greeted with the complex and comforting flavours of the Chinese five-spice.

The five-spice powder is a fundamental pillar in Chinese cuisine that chefs build on and it consists of a standard blend of fennel, cloves, cinnamon, star anise, and Szechuan peppercorns. Lacquered and infused with flavour, the ribs were succulent and off-the-bone tender.

My only gripe was the flavour could be slightly overwhelming on the palate after a few mouthfuls due to its robust flavour profile. 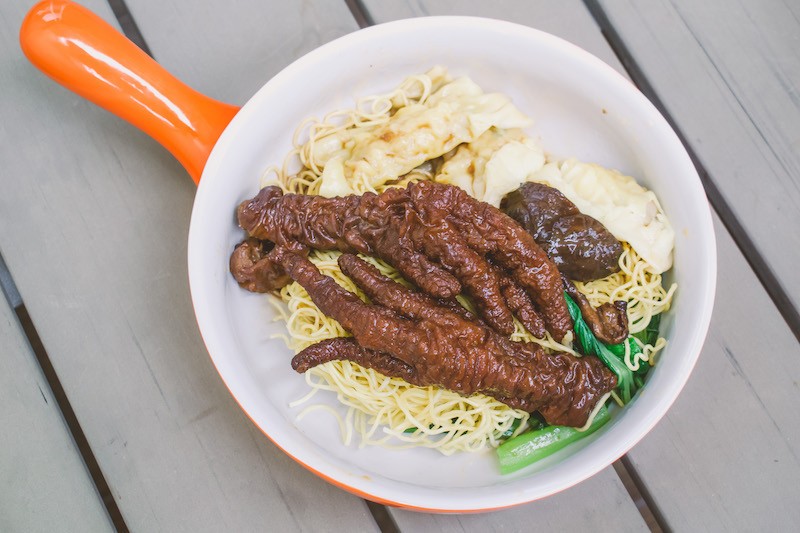 The Chicken Feet Noodles were served with springy noodles immersed in black sauce. Packaged separately from the entrée, two plump chicken feet were stewed perfectly in a savoury gravy. The chicken feet were palatable with a gelatinous mouthfeel. It was wondrously soft and flavourful as the meat fell off the bones easily. 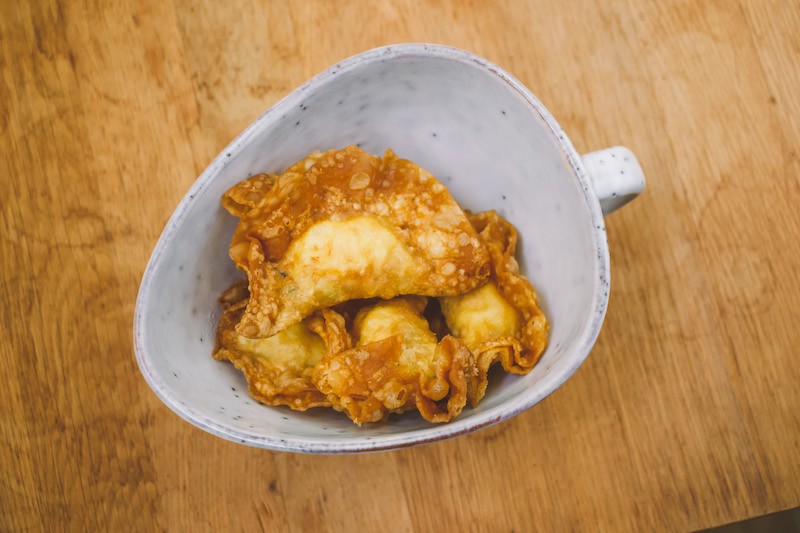 Last but not least, the showstopper was their crispy Fried Dumplings that had a skin with perfect thickness. Enveloped within were grated carrots, mushrooms and minced meat, and the small parcel had a perfect ratio of the wrap to filling.  It served as an impeccable accompaniment to the noodles due to its crunchy and savoury nature. I was impressed with the fact that even though it was left out on the table for quite some time, the flavours were not compromised; it managed to retain its crunchy crisp edges as well.

All in all, I would say that this stall pays homage to the yesteryears with its old school flavours. It still makes a very down-to-earth bowl of noodles for a satisfying lunch, especially with its generous portions. Do note that their Curry Chicken Noodles and Braised Pork Ribs Noodles are available on weekends only while stocks last.

If you are looking for some modest wanton noodles, Shi De Fu is available for pick-up and islandwide delivery! Head over to their Facebook page and contact them to secure an order!