Here’s a sneak peak of what’s to come. The ultimate Best of Mooncake 2022 one-day sale will be happening on 16 August, where mooncakes will go for up to 60% off. On 17 August, best-selling mooncake brands will take part in a relay (just like a baton relay race!) with upsized limited time deals.

On 18 August, top brands will hold Shopee-exclusive deals that you simply can’t miss, and on 19 August, mooncake assortments will be available from as low as S$5. Unique mooncake flavours and gift sets will be available on 20 August, and lastly (but certainly not least), this one is for the kids and those young at heart— stay tuned to exciting gifts with purchase like exclusive Shopee lanterns with every mooncake purchase!

Truly, all these perks make it Singapore’s biggest Mid-Autumn sale yet. We managed to get our hands on some of these Shopee-exclusive mooncakes and have weaved in some bonus perks and tips, so scroll on to find out more!

What I tried at Shopee’s Mooncake Fair I started the ball rolling with the first Shopee-exclusive brand— Golden Moments, which is famed for their premium durian products. Out of the four flavours, my personal favourite was the Mao Shan Wang, which is Golden Moments’ signature snowskin mooncake.

The luscious durian filling was heavenly, having been made with pure mao shan wang puree, and I had to resist finishing the entire piece because I wanted to share this indulgent and glorious treat with the rest of the team. 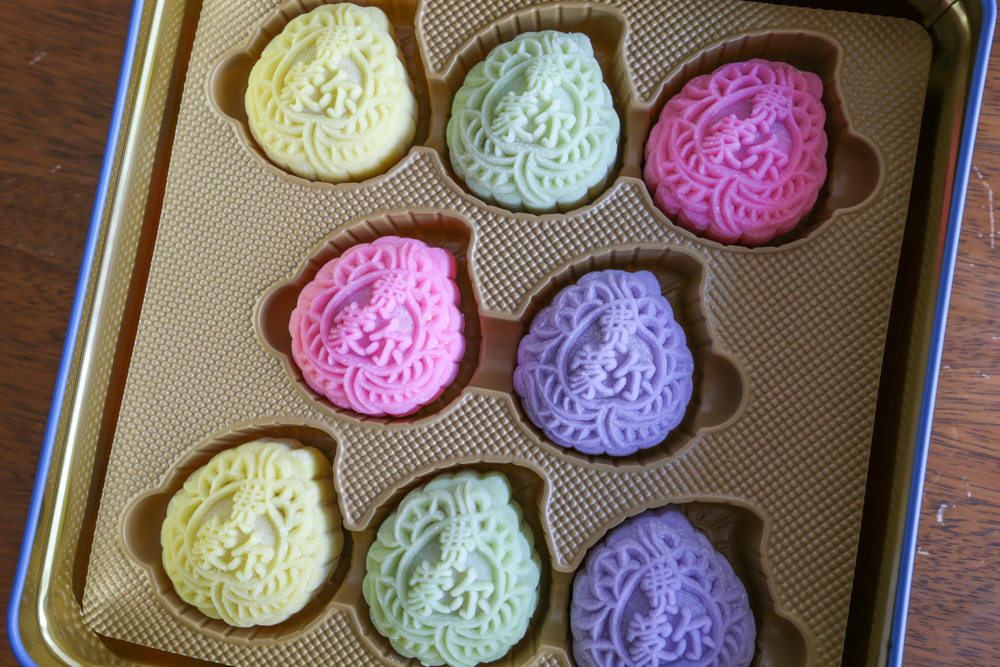 Fairmont Singapore’s collection of snowskin mooncakes were incredibly pretty and each mooncake surprised me with their pastel hues.

Thanks to the sale, the price of the Assorted Snowskin Mooncakes have been reduced by 15% to S$73.10, so be sure to keep a look-out! I was most intrigued by the Elderflower Lychee, which came in a gorgeous purple hue. I’ve always been the biggest fan of floral flavours, but I know how hard it can be to weave it in as it has a possibility of coming across as too perfumed.

To my delight, Fairmont Singapore’s Elderflower Lychee snowskin mooncake was executed perfectly well. The soft filling was light and floral and more importantly, it wasn’t too overpowering. The highlight of the mooncake was the lychee centre, which was delightfully sweet without being too cloying. I could taste a hint of cream-like butter, which added a silky note to the entire mooncake.

All the flavours came together incredibly well, and for a second, I felt like I was sipping on a cup of black tea while nibbling on a juicy lychee.

Bonus tip: Did you know that you can shop for mooncakes by type? This makes mooncake shopping all the more easier, especially for those who know what they want. Sort by popular baked and snowskin varieties such as Traditional White Lotus Mooncakes, Teochew Flaky Yam Mooncakes, Durian Mooncakes, Lava Custard Mooncakes, and even Alcohol-Infused Mooncakes! Freshly handcrafted and baked to a golden brown hue, this box of four mooncakes includes perennial favourites and new creations, making for an ideal gift for loved ones and business associates.

Note that the Assorted Baked Mooncakes (4 Pieces) is also part of Shopee’s Mooncake Fair sales, and its price can drop by 20% to S$64 with delivery! Out of all four flavours, the Imperial “Long Jing” Tea with Pumpkin Seeds won me over the most. I’m not even kidding when I say that I was silent for a fair amount of time because of how impressed I was with this mooncake.

The taste of the green tea came across in a rich and fragrant manner, and I’ve got to say that Singapore Marriott Tang Plaza Hotel really did manage to capture the essence of long jing tea fabulously. While the paste itself was mildly sweet and smooth, the combination of roasted earthiness and nuttiness went superbly well together.

Bonus perk: If you’re an avid Shopee user, you’ll be familiar with the hyped daily flash sales. This applies to mooncakes too, with mooncakes going at irresistible flash prices at 12pm and 10pm daily from 16 to 17 August 2022.

Support local with Singapore’s very own homegrown Mdm Ling Bakery, who has outdone themselves this year with the world’s first-ever mooncake-inspired MONOPOLY board game. Yes, you heard me right!

The MONOPOLY Street Smart Mooncake Gamebox (sale price S$94.40, U.P. S$118) is the first of its kind. The iconic mooncake box transforms into an actual MONOPOLY board, while the properties have been renamed to feature unique flavours such as Shrimp Esplanade, Cheese Bangkit Court, Kopi Siew Dai Drive and even Lorong Cranberry Ong Lye. Super cute! Pick between five of Mdm Ling Bakery’s mooncake series for this purchase, such as YUMMYLICIOUS! Cookie-inspired Series and LAVALICIOUS! Signature Series, so that you can enjoy a game of MONOPOLY while indulging in your favourite mooncakes. Each series comes with four mooncakes. Enjoy an exclusive S$2 off min. spend S$25 when you purchase mooncakes from local sellers like Mdm Ling under the #SupportLocal section! You can’t go wrong with this traditional mooncake. The combination of smooth and nutty white lotus paste with savoury salted egg yolk is utterly delightful, and for mooncake purists who love to stick to the classics, this one is definitely for you.

I also loved that you could pick between two and four pieces for this particular deal, as it makes gifting all the more convenient. We’re told that during Shopee’s Mooncake Fair, the price of the Classic Box White Lotus Paste with Double Yolk and Melon Seeds Mooncake can go for as low as $69.75 for 4 pieces— that’s a whopping 25% off!

Bonus perk: Complete the mooncake experience by pairing it with a wide array of Tea & Wine Pairings, Pomelo Fruit, Lotus Root and Roasted Duck. Shopee even has complementary items such as DIY Mooncake Kits, which’ll be a hit with the kids, and Mid-Autumn Decor as well. Last but not least, I tried Shangri-La Singapore’s mooncakes which are by Shang Palace, one of the foremost Chinese restaurants in Singapore.

Shangri-La Singapore’s mooncakes are also exclusive to Shopee, and while its Four Treasures Mooncakes is priced originally at S$85, we hear that there’ll be plenty of flash deals coming up so you can grab this box of four baked mooncakes at S$72.25! The Mixed Nuts with Chicken Ham piqued my interest immediately. I was a little sceptical of the combination of flavours, given that chicken ham typically appears in sandwiches, not mooncakes (for me, at least).

Texturally speaking, this has got to be the most interesting mooncake I’ve had. Cutting into it revealed layer upon layer of different kinds of nuts, and it was visually captivating and fascinating. As for its taste, its flavours were peppered with hints of sweet roastedness, and the chicken ham component surprised me with its subtle smoky flavours, which complemented the nuts well.

Despite my initial scepticism, I ended up enjoying this savoury mooncake and even indulged in  several tiny slices because I took my time to savour its flavours, which were pretty unique for a mooncake.

Bonus perk: If deciding on which mooncake to buy is stressing you out this year, try Shopee’s Mooncake Tasting Bar. You’ll be able to sample mooncakes on your wishlist from as low as S$5 from reputable brands such as Four Seasons! Out of all the six brands I tried today, my personal favourites were those that surprised me in terms of flavour, texture and packaging.

I might go to sleep dreaming of Singapore Marriott Tang Plaza Hotel’s Imperial “Long Jing” Tea with Pumpkin Seeds, and I’m not kidding when I say that my colleagues and I might fight over Golden Moments’ Signature Mao Shan Wang Snowskin Mooncake. Plus, Mdm Ling Bakery’s mooncake-inspired MONOPOLY game was no doubt one of the most unique things I’ve seen this year, so thumbs up to them for this unique concept.

While I only managed to try mooncakes from six Shopee-exclusive brands today, Shopee’s Mooncake Fair has a total of eight exclusive brands and a total of 16 exclusive flavours, truly making it a one stop shop for mooncakes this year. Throughout the duration of the Mooncake Fair, there’ll be 1-for-1 deals, daily flash sales, mooncake and shop vouchers, cashback vouchers, free shipping with minimum spend and more, so be sure to keep your eyes peeled!

* This post was brought to you in partnership with Shopee.