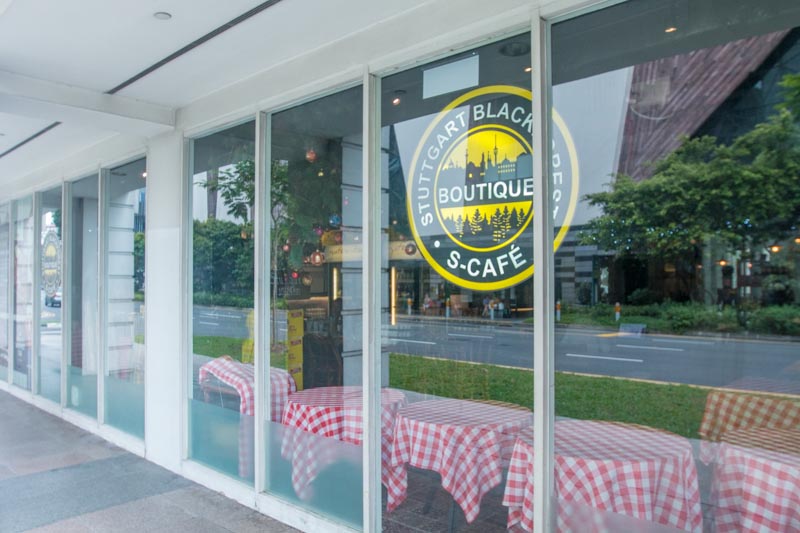 When it comes to hearty meat dishes, the Germans have the right idea. At Stuttgart Blackforest Boutique S-Cafe, traditional German cuisine is paired with imported German beers to give you an authentic German dining experience. Stepping into the cafe almost felt like stepping into a rustic German town. I really liked the timelessness of the cafe interior. Handcrafted cuckoo clocks decorated the walls and life-sized toy nutcrackers stood at attention. There was even a water mill bubbling merrily in the corner! 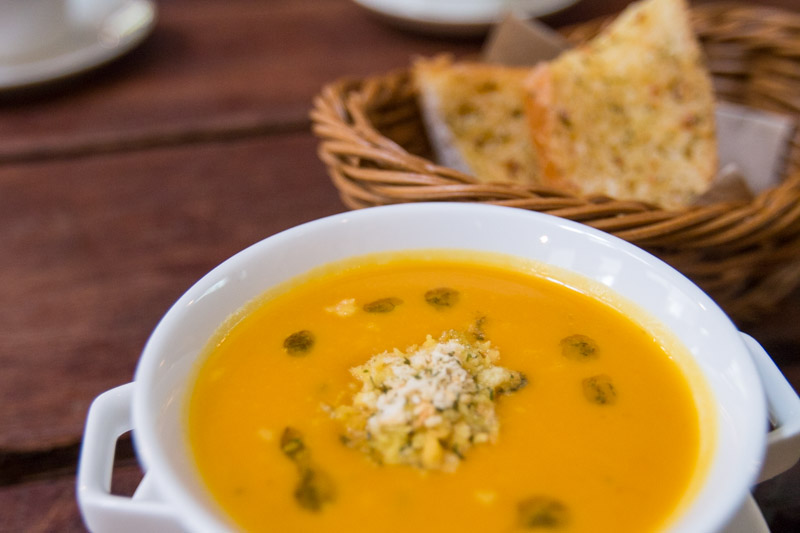 Of course, the real highlight for me was the food. I started with the Roasted Pumpkin Soup ($8.80), which was served with deliciously greasy and fragrant slices of garlic bread. The toasty slices were just the way I like them, crispy with a strong garlic fragrance. The soup was lightly sweet and creamy, with a smooth texture that made it really easy to drink. 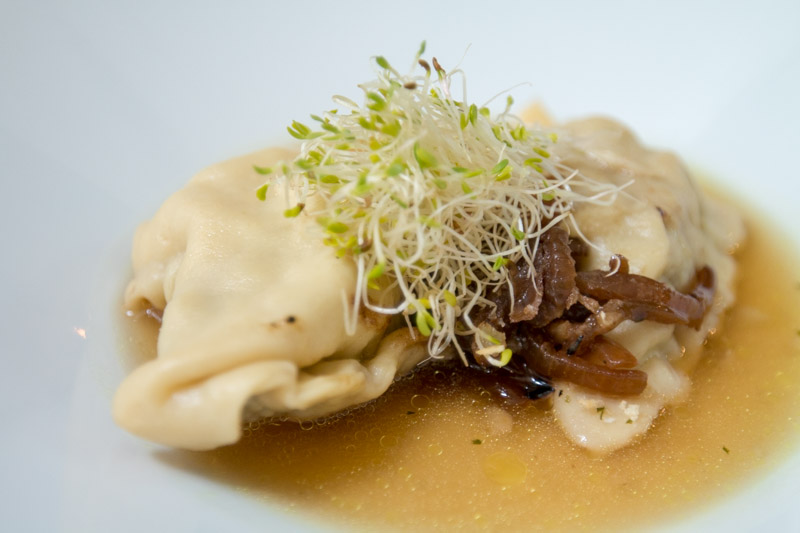 I wasn’t kidding when I said that German dishes were hearty and meaty. I tried the Maultaschen ($16.80), which looked like dumplings filled with minced meat and served with sauteed onions. A thin layer of dumpling skin was wrapped around peppery minced meat. The dish also came with alfalfa sprouts and caramelised onions. I liked how the sweetness of the caramelised onions helped to undercut the heavy meaty flavour of the dish. 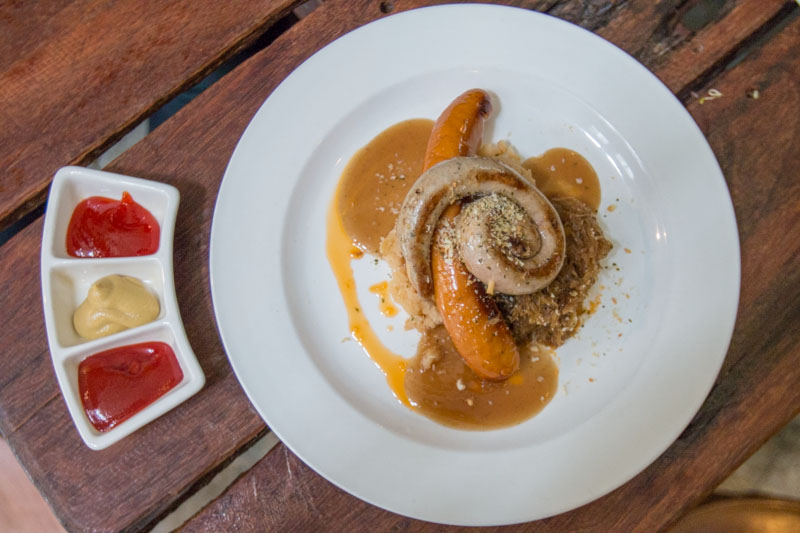 I also had the Wurstchen, or Specialty Sausages ($19.80), and I chose to have chicken and pork sausages. 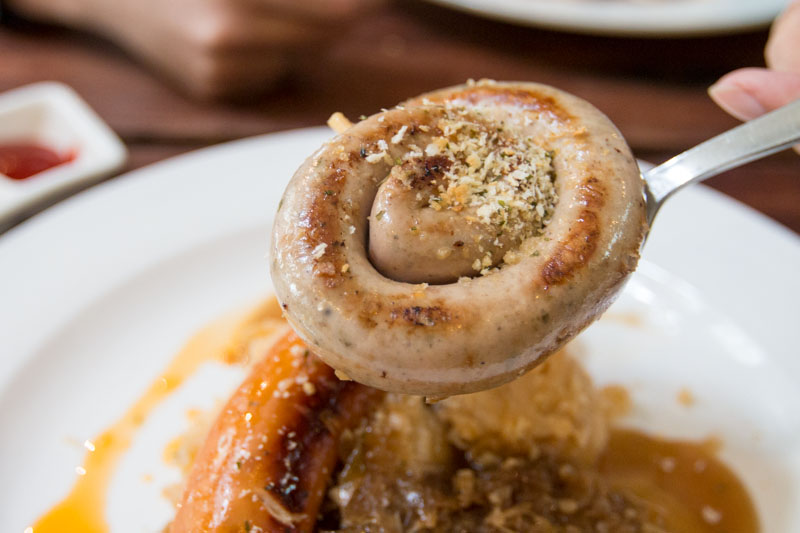 I found it quite cute that the pork sausage was curled into the shape of a snail. It was lightly spiced and had a slightly gamey flavour which I enjoyed. 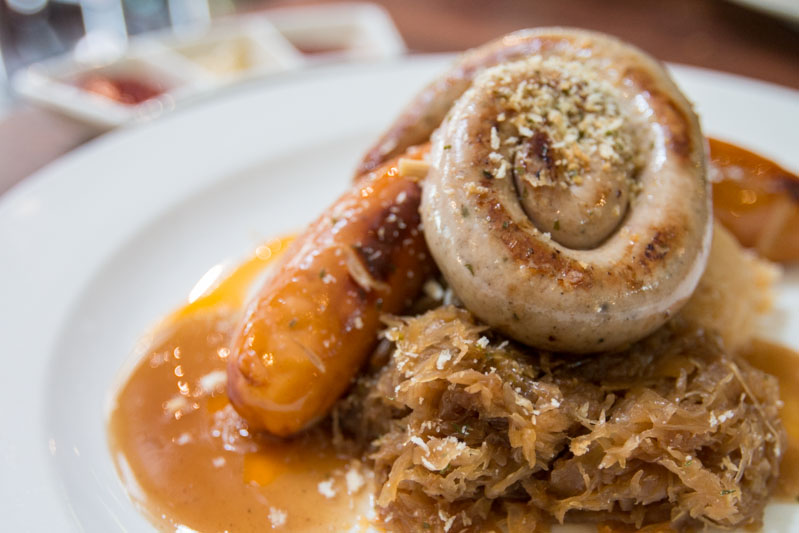 The skin of the chicken sausage was quite sinewy, but when I bit into it, the chicken meat was juicy and soft. What I liked the most was how the cheese centre burst into flavour in my mouth! The most iconic main dish in the cafe was the Schweinshaxe, or Single Portion Pork Knuckle ($19.80). This famous German dish is also available as a sharing platter for three to four people. For $48, you can get a Whole Pork Knuckle which weighs 1.3kg – 1.5kg. Talk about a meat overload! The first thing that caught my attention about this dish was how crispy the skin was. Biting into it actually produced an audible crunch, and it was incredibly fragrant too. The dish was served with two scoops of mashed potato. The dense and creamy carb helped to add a starchy flavour from the meaty pork knuckle.

The pork meat was juicy and tender, with a fatty layer that melted on my tongue. Try eating the pork knuckle with some of the sauerkraut, the sour taste of the pickled cabbage helped to undercut the meaty flavour of the dish.

Finally, I ended the meal with two famous dessert cakes: the Kasekuchen, or Cheesecake ($12), and the Schwarzwalder Kirschtorte, or Signature Black Forest Cake ($14 for 125g slice, $125 for 1.5kg whole cake). 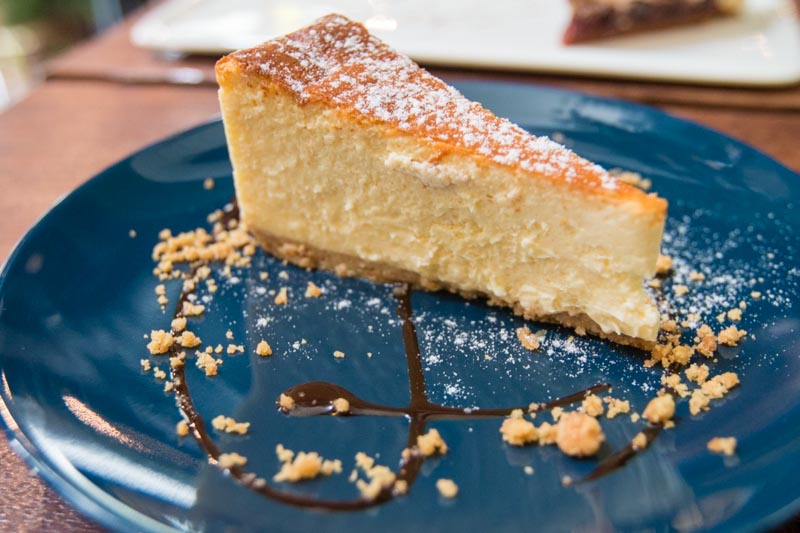 The Cheesecake was smooth and creamy, yet still quite light and fluffy. Unlike most other cheesecakes that usually sit quite heavily on my tongue, this cheesecake had a lightness that reminded me of Japanese cheesecakes. 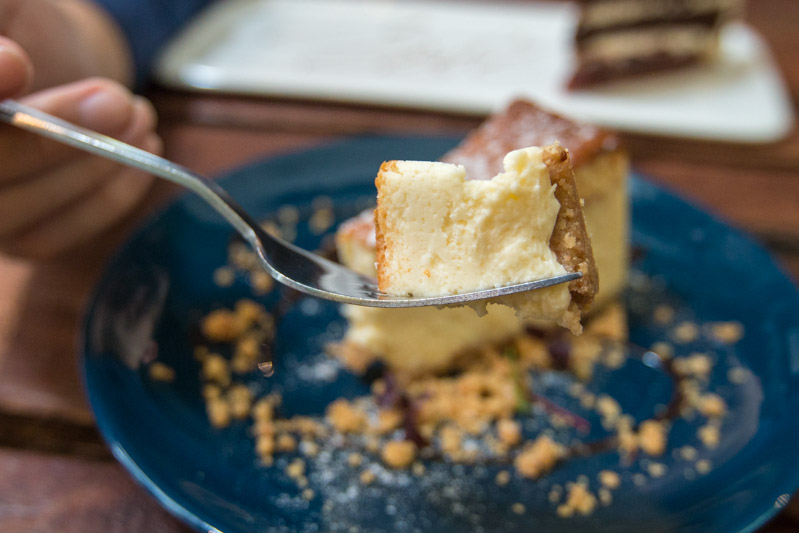 The flavour was still rich and fragrant, and I liked the denser crumbly bottom and the crumbs scattered on the plate. 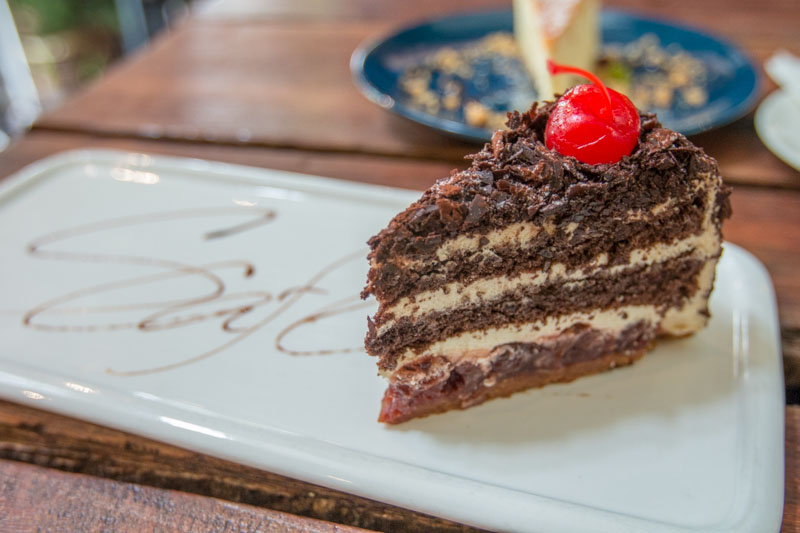 The star of the cafe was definitely the Signature Black Forest Cake. After all, the cafe itself is named after that famous region too! This decadent dessert was a little slice of heaven for me, from the brandy-soaked cherries to the rich chocolate sponge cake, I loved every bite I took. I might be biased as a chocolate lover and a dessert person, but the bittersweet chocolate went very well with the slight kick of the brandy-soaked cherries. 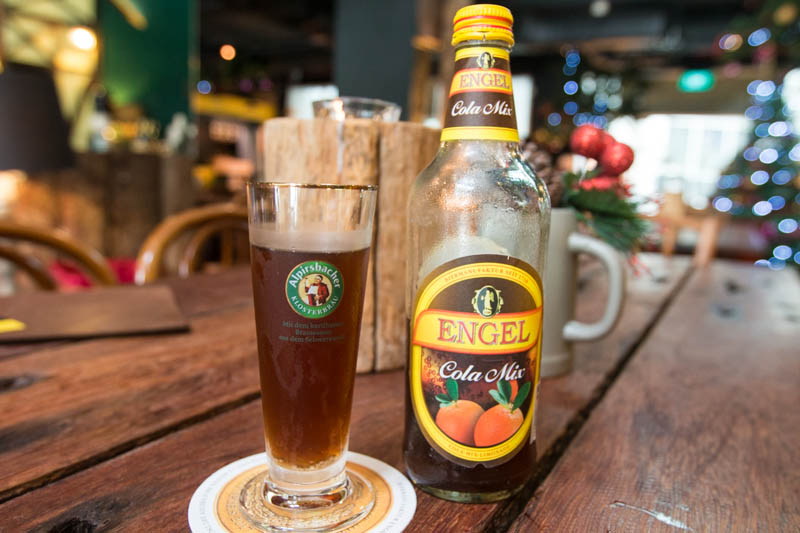 For post-meal drinks, I tried the Engel Cola Mix (Orange) ($5 for 500ml). This refreshing German soft drink was fizzy like Coca-Cola, but with the tangy flavour of Fanta Orange. Definitely, an interesting drink that’s worth a try! 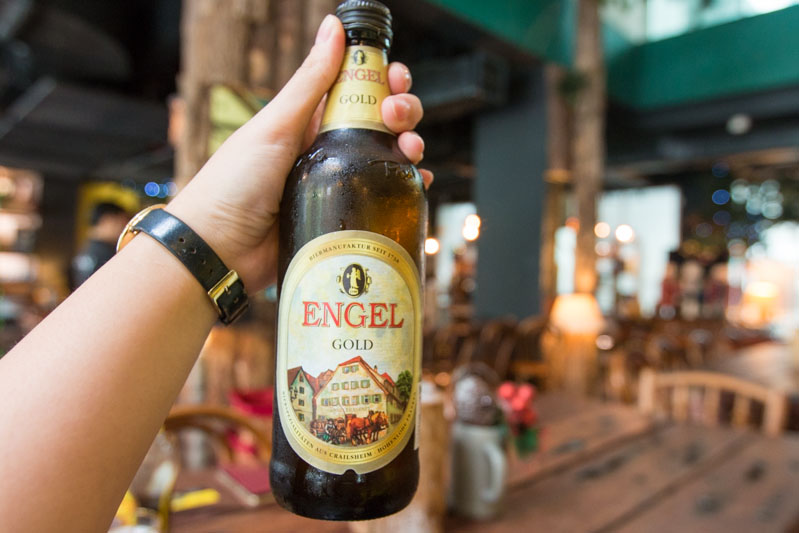 I also tried one of the beers, the Engel Gold ($16 for a 500ml bottle, $14 for a pint, $11 for a glass). Imported from Germany, this fairly light beer came in a pretty golden hue. It had a slightly malty aroma but wasn’t too heavy on the palate. I really liked the faint, sweet finish that tasted like honey. 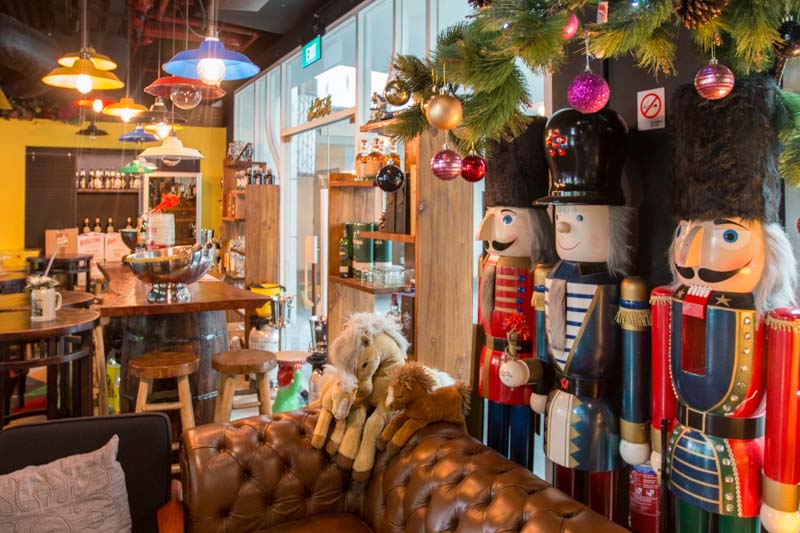 If you’re looking for authentic German food, look no further because Stuttgart Blackforest Boutique S-Cafe offers all of that and more. Let the food and ambience transport you to Germany, without having to actually travel!