You have been warned: be prepared to get your hands dirty at this murtabak manis speciality store in East Village. 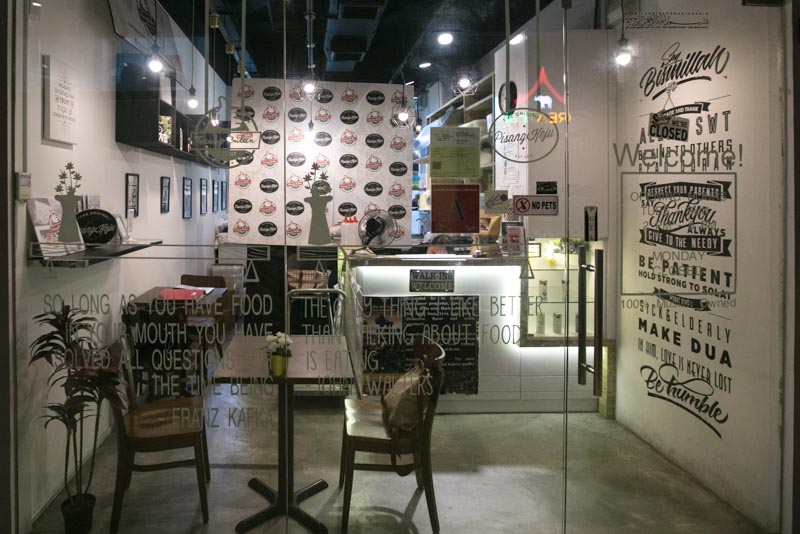 The hole-in-the-wall shop is cosily decorated and has minimal seating available, so you’ll want to make your way down when it’s non-peak hours or just dabao as a snack. Terang bulan, or what is more commonly known as murtabak manis in Singapore is a thicker and more decadent version of the mee chiang kueh. Drizzled with condensed milk, this traditional turnover pancake is a popular Indonesian street snack. 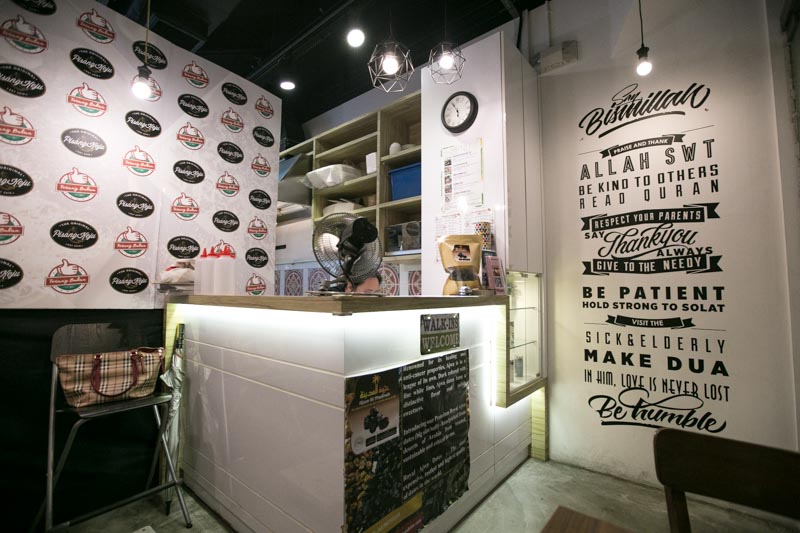 Terang Bulan started out from Adhita’s love for the snack since she was a child living in Indonesia. Ever since coming to Singapore, she has had difficulty looking for the perfect murtabak manis.

As such, she began her quest to find a delectable and authentic murtabak manis that taste just like the ones she had back in Indonesia. 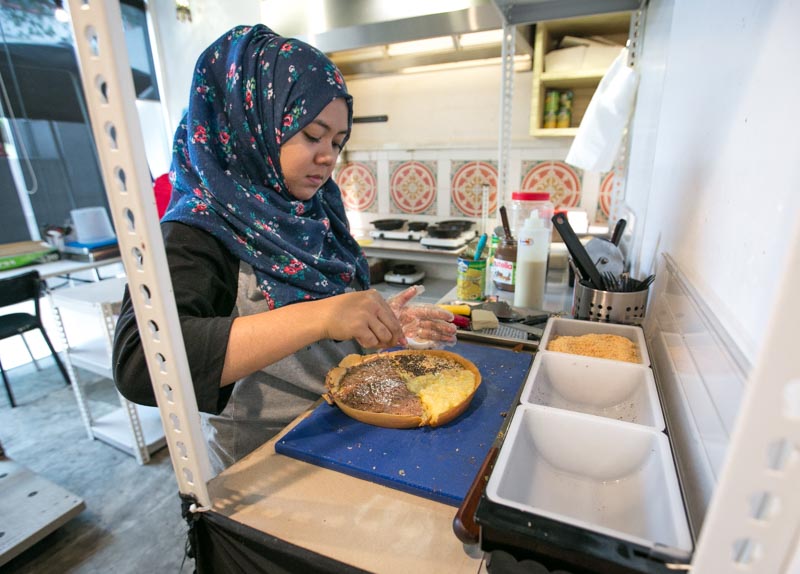 “There was just something missing and it didn’t taste like the ones I had in Indonesia,” Adhita told us. That was when an idea popped into this young entrepreneur’s mind — to introduce her favourite childhood snack to Singaporeans.

Together with her husband, they went back to Indonesia early 2017 just to learn how to make murtabak manis. Upon returning, she decided to quit her full-time job and start her own business. 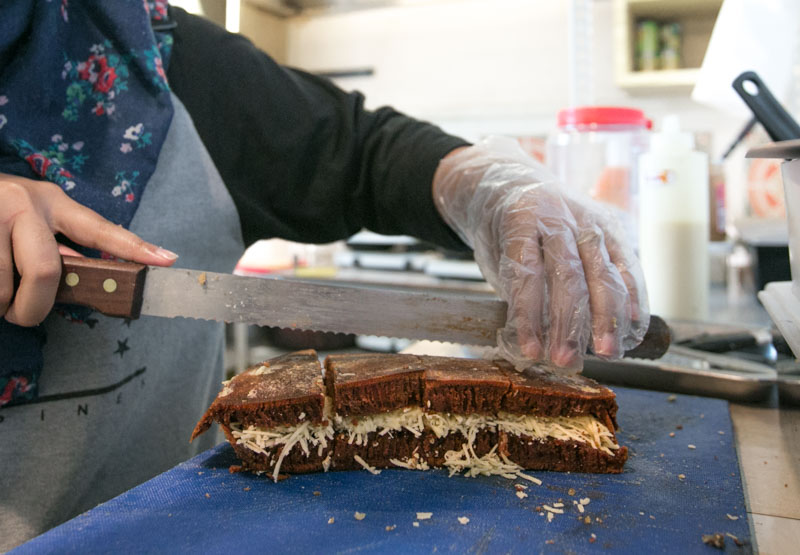 It took her over two months to figure out the perfect recipe and menu. She started the business from home, using social media platforms and the word-of-mouth to promote it. Within months, Adhita received an influx of orders and her business began to flourish.

She began looking into opening a physical store and started exploring different flavours, expanding the menu, which only offered eight flavours initially. Her dream was finally fulfilled when they opened their stall in East Village earlier this year. The space is shared with The Original Pisang Keju. 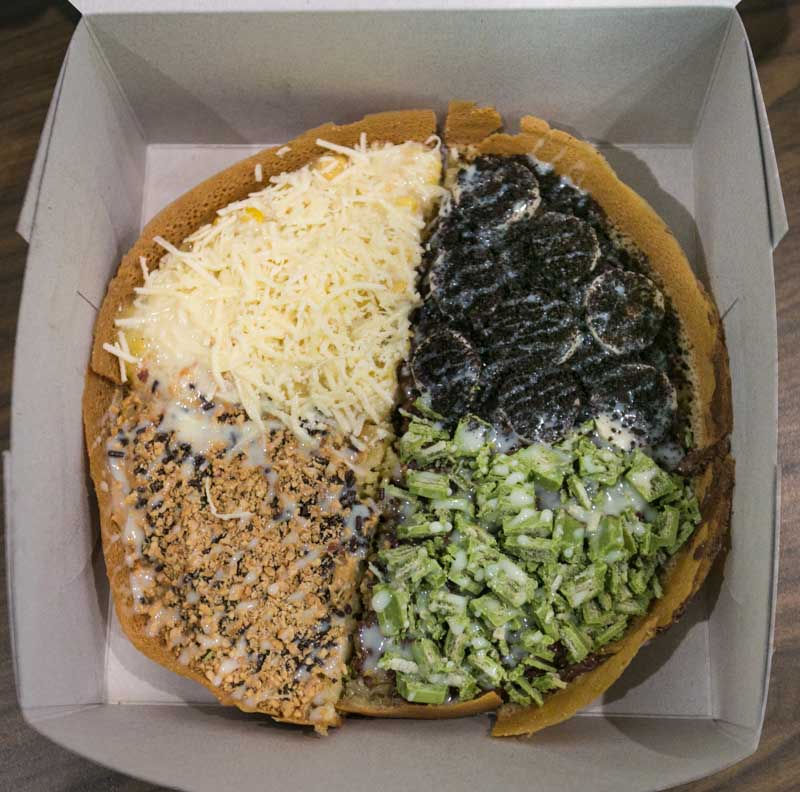 Each of their murtabak manis is served fresh and hot from the griddle. To get the best of both worlds, we ordered the Pizza Terbul ($10) — two Standard + two Premium flavours.

As per the lady boss’ recommendation, we decided to go with Cheesy Corn and Chokacang (chocolate and peanut) for the standard flavours. As for the Premium flavours, we picked Green tea and the Nutnana O (Nutella, banana and Oreo). 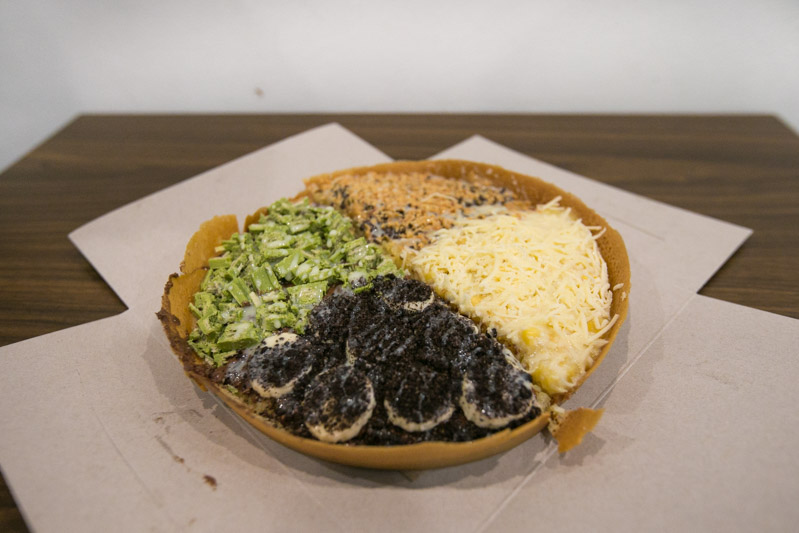 Our Pizza Terbul was packed nicely in a box that resembled a pizza box. We had our cameras ready and could not contain our excitement when the box was placed on our table. Upon opening the box, we all had our eyes on the most sinful looking slice — the Nutnana O. A layer of Nutella, topped up with slices of banana and Oreo crunch drenched in condensed milk. Sounds like the perfect combination! In spite of its simplicity, this was the flavour that won us over. Within seconds, the two of us scarfed down the entire quarter of the pancake.

A little tip from us: savour it before the Oreo crunch gets soggy from the condensed milk. 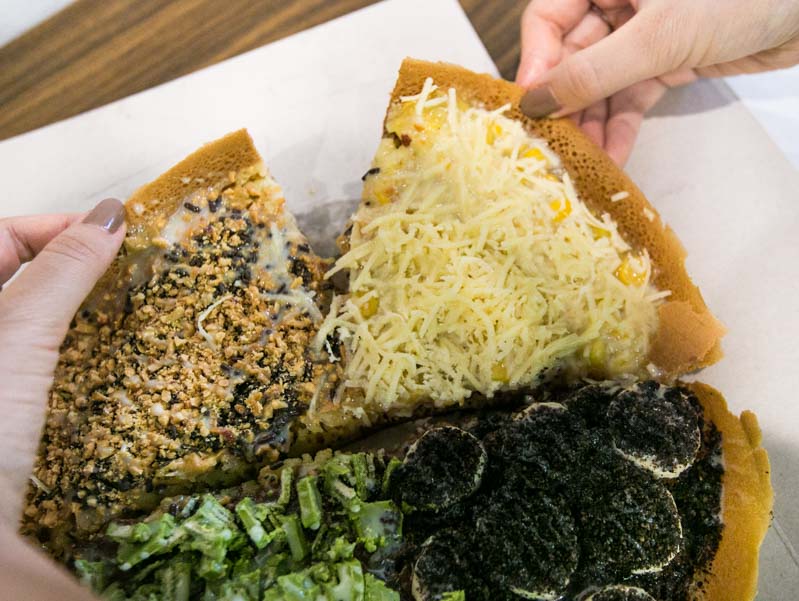 Next up, was the Cheesy Corn. There was a very comforting sense of familiarity in it. Perhaps reminiscent of the ones we have had at pasar malams.

The sweetness of the canned-corn went well with the grated cheese. However, we felt that it could have been even better if they melted the grated cheese a little. Doesn’t that sound amazing? 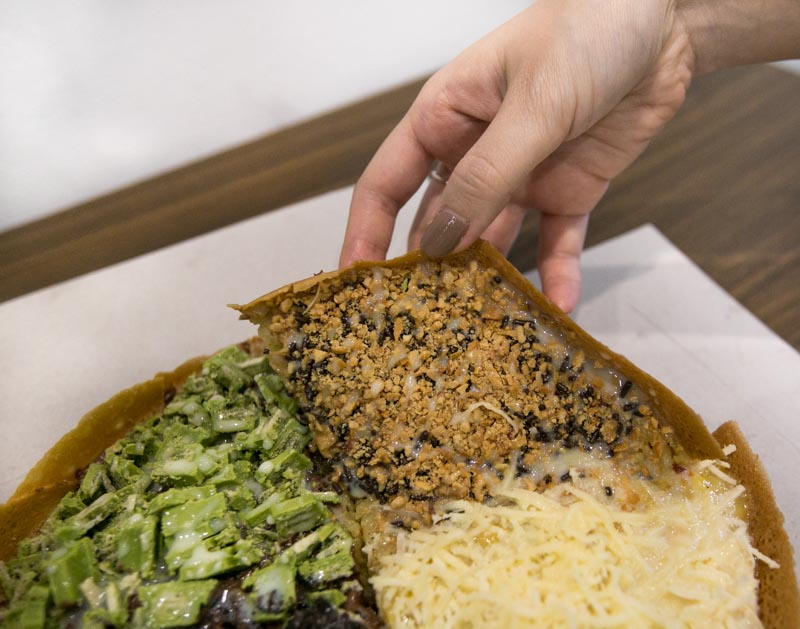 Moving on to the Chokacang. The soft and pillowy pancake was covered with chocolate rice and topped with finely-chopped peanut sprinkles.

In terms of texture, this was the crunchiest of the lot, and would definitely be a hit with nut-lovers. I felt that the finishing touch of the condensed milk brought this entire creation together. Calling all Matcha addicts out there, can’t get enough of green tea-flavoured food? Fret not, this slice of Green tea murtabak manis will satiate your palate. Slathered with a thick layer of Nutella, this quarter of the pancake was coated with a generous amount of chopped Green-tea Kit Kat. However, unlike the Chokacang, we felt that the drizzle of condensed milk made this section of the pizza terbul overwhelmingly sweet. 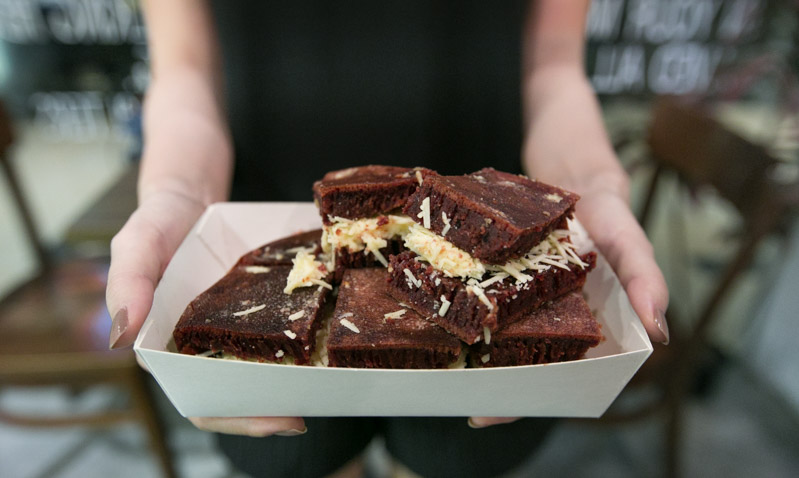 We went there in hopes of trying out the highly-raved Terbul Red Velvet Cream Cheese ($11). Unfortunately, the cream cheese was sold out. (Perhaps a testament to how popular it is with the customers!) Adhita kindly offered to replace it with grated cheese, just so we could try out the Red Velvet-based Murtabak Manis. 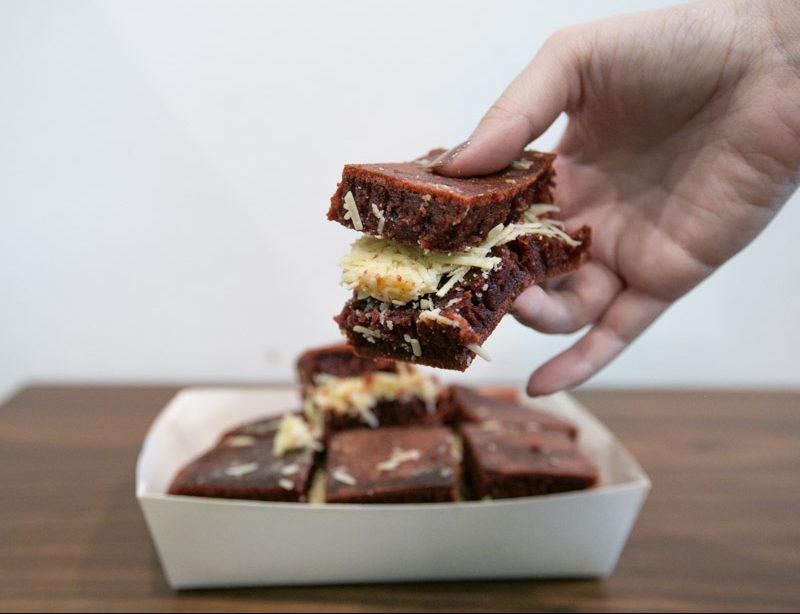 Once again, the moist and dense texture of the pancake did not disappoint. However, we felt that it would have been better if the taste of the red velvet could have been more distinct.

It was a pity we did not get to try out their Red Velvet cream cheese murtabak manis. But we will definitely make our way back to East Village for it. 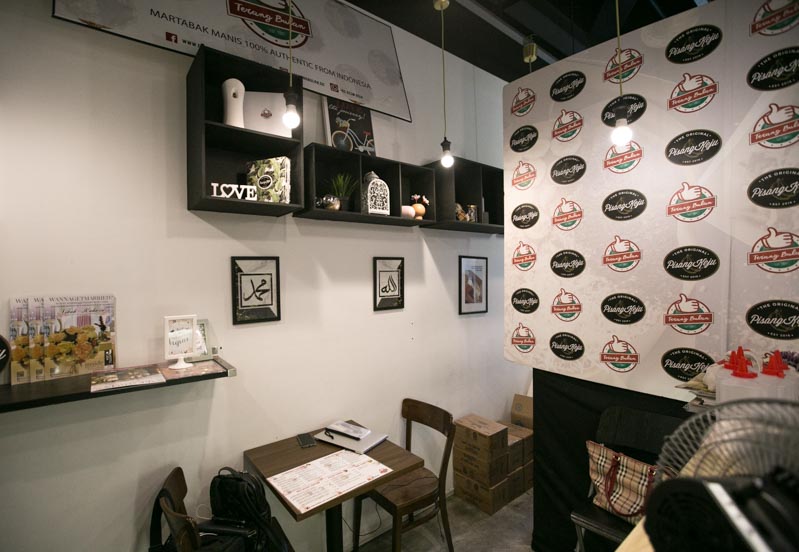 We left Terang Bulan, satisfied after indulging our sweet-tooths. As we were about to board the bus to the MRT station (two stops away from Tanah Merah MRT station), we hesitated. Glutted with all that sinful goodness, we changed our minds: Nah, we better walk.

Previous articleBlind Taste Test: Which Pizza Delivery In Singapore Should You Order From For Your Next Party?
Next articleThe Beef Station: Hainanese-Style Beef Noodles & Crayfish Laksa In Potong Pasir