Finding time to sit around the table with family and friends for a meal sure seems like a hard-to-come-by affair (sadly), and we resort to once-a-year reunion dinners or the occasional meet-up.

It is no wonder we muse at McDonald’s Happy Sharing Box and are more than willing to get sharing platters when we’re out with our friends. Somehow, we just can’t deny that feasting together beats eating alone. 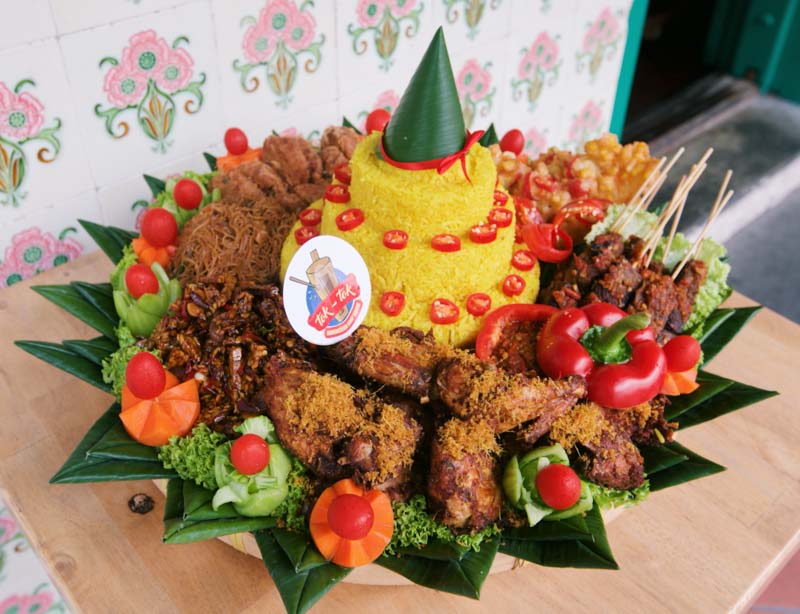 Communal dining is a very integral part of some cultures, as exemplified with Tok Tok Indonesian Soup House, who has taken sharing food to the next level with their huge Nasi Tumpeng, meant to feed ten diners. 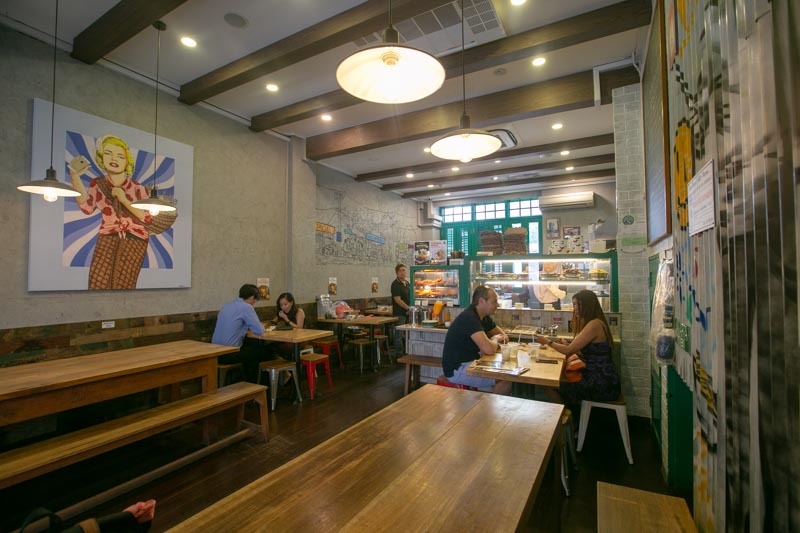 The restaurant has opened another outlet at Ann Siang following its first in Somerset, boasting to be the first Indonesian restaurant in Singapore to focus on lesser-known soup dishes of Indonesia.

Nasi Tumpeng originated from Javanese cuisine, being traditionally a sharing dish during celebrations or festivities. Bearing this in mind that it’s ideally meant to be shared amongst ten (or more) people, don’t be too quick to judge its price! The highlight of the Nasi Tumpeng (S$198) besides its obvious grandeur is the surrounding seven side dishes around the golden four-tiered tower of Nasi Kuning (turmeric rice). Our favourites include the Galangal Fried Chicken, Bakwan Jagung, Perkedel and Tempe Orek. Crispiness, fragrance and juiciness are some essential qualities of a good fried chicken. The Galangal Fried Chicken had a lightly-spiced marinade topped with shavings of galangal (blue ginger).

Unlike regular ginger, galangal has an aromatically sweet quality and though it tastes rather similar, it’s far more pungent and peppery, making the fried chicken heavy on the aromatically seasoned.

Sadly, we felt that the meat was a little on the dry side, despite being full of flavour. While I was relatively new to Indonesian cuisine, there were a few side dishes that were still familiar, including the Perkedel, or bergedil, as most of us would know it by.

Put simply, this side dish is essentially a deep-fried patty made of mashed potato and minced meat.

The cliche description of “crispy on the outside, soft on the inside” seems only apt to describe the perkedel. It is this exact quality that makes it such a crowd-favourite too. 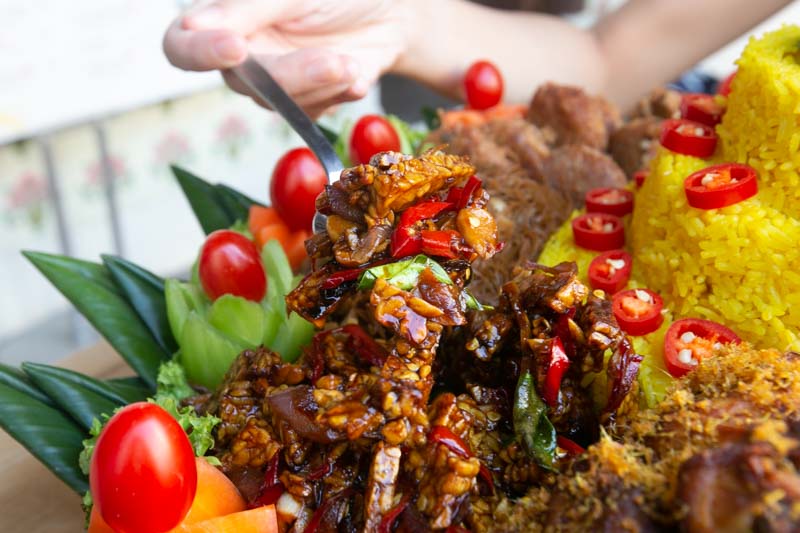 It was my first time trying tempeh — a traditional Indonesia-originated soybean product where the beans are fermented and bonded together into cake-like blocks. The tempeh is made sweeter by being fried with kicap manis (sweet soy sauce).

Soft, sweet and sticky, the versatile ingredient can be prepared in many ways. Fried with chilli and coated in sweet soy sauce, the sourness from the fermentation added another dimension to the Tempe Orek.

Not being used to its strong and slightly pungent flavour, I’m ashamed to say this Indonesian favourite for many is not one for me. Two new side dishes have been added since the introduction of their Nasi Tumpeng, which includes Bakwan Jagung and Beef Sate.

The Bakwan Jagung is a delightful corn fritter. It sees a deep-fried flour batter studded with corn kernels, producing a crispy and sweet snack-like side dish. 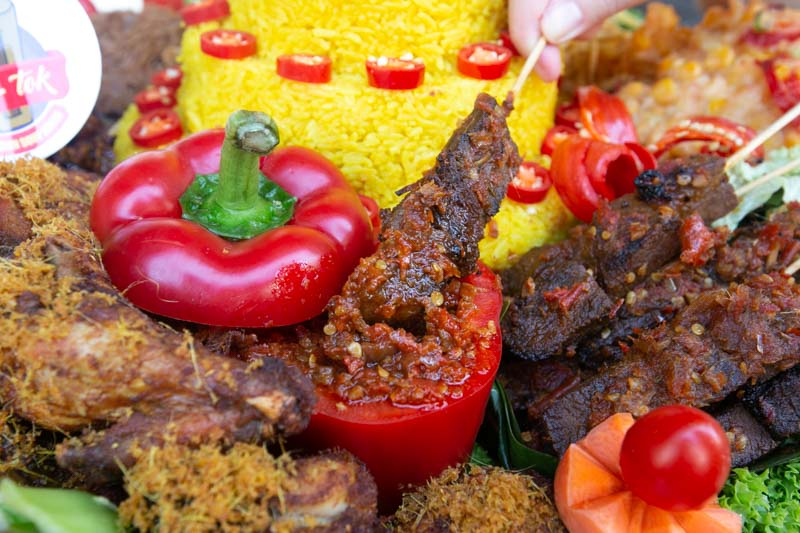 Forget your brave endeavours with spiciness, be it the spicy noodle challenge or ordering da la (大辣, spiciest) in your Ma La Xiang Guo. Indonesian food is incomplete without the addition of fiery and numbing chillies.

At Tok Tok, test your limits with their sambal, with three levels of spiciness. The one that came with the Nasi Tumpeng was supposedly the least spicy, but even my spice-loving friend admitted it had quite a bit of kick. 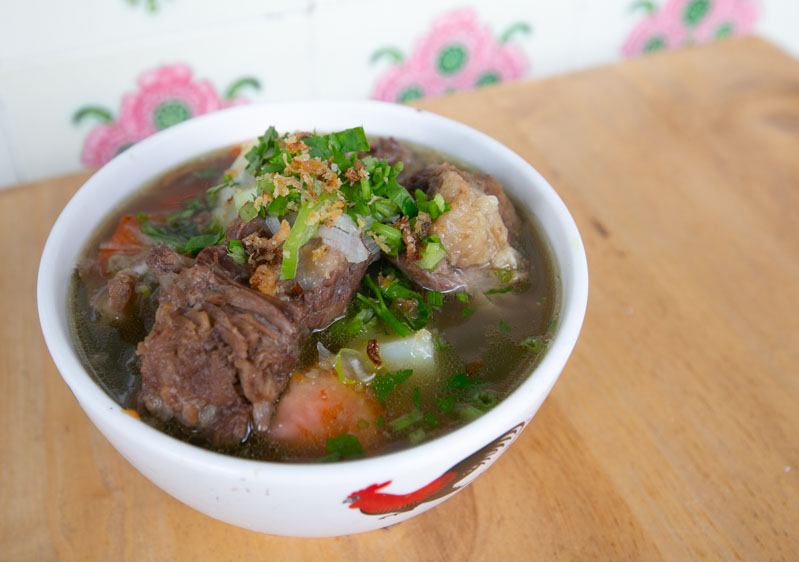 The Sop Buntut (S$9.50) is oxtail soup, a highly popular street food of Java which has made its way to the menus of many Indonesian restaurants.

Any soup-lover will tell you that hours of broth-boiling will birth the best and most flavourful soups, and everything else is secondary. This soup is one that reminds you of home, the kind that you’ll eagerly slurp up and ask for seconds. 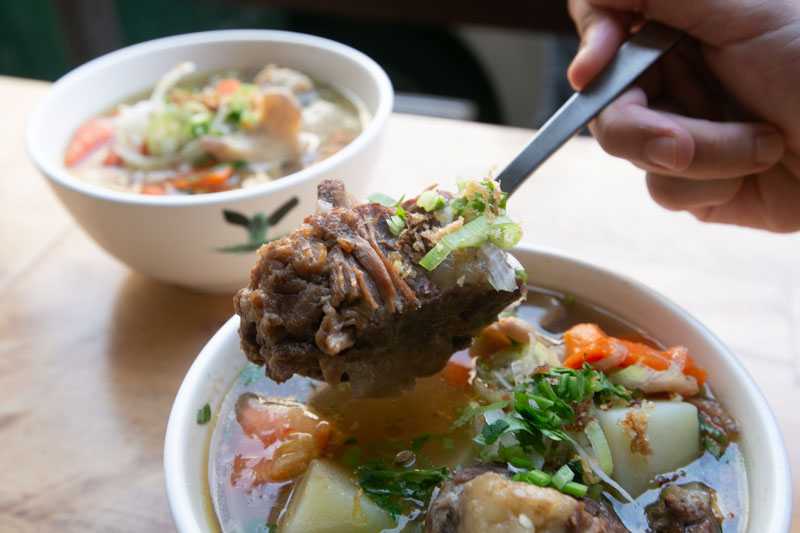 If you’re still not sold, the tender and juicy fall-off-the-bone quality of the meat will definitely win you over. 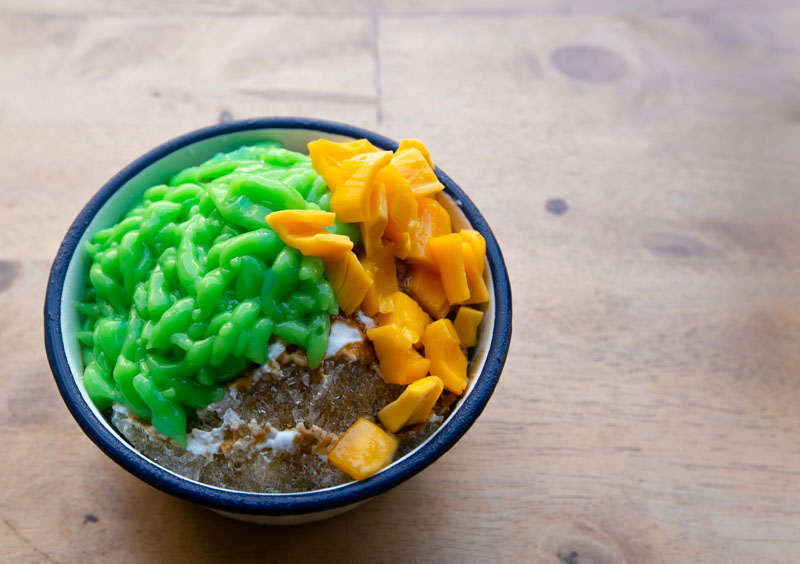 I’ve never quite heard of any other dessert that has brought up as much commotion and competition as chendol.

We’re probably all familiar with the worm-like green jellies that top this local dessert and fought over which Southeast Asian country owns its birthrights or which variation tastes the best. 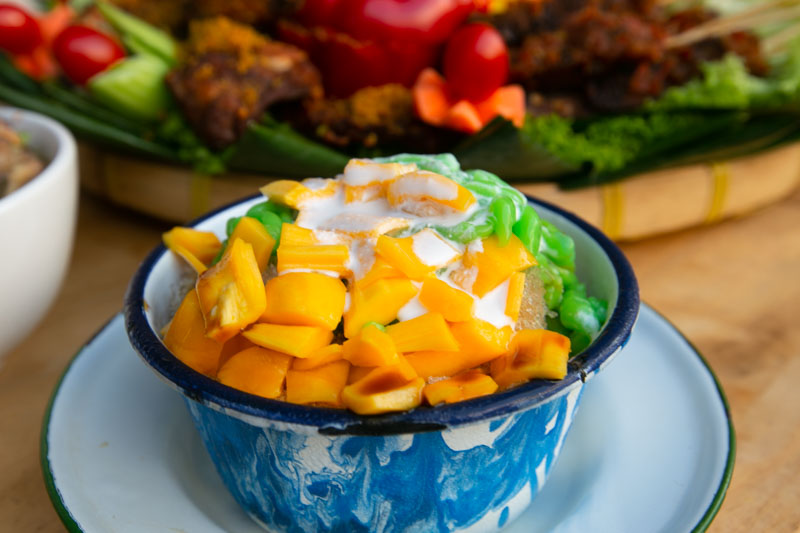 The Es Cendol (S$3.80) we had was clearly one that topped the charts. The dessert had soft chendol that almost melted in the mouth with a generous amount of gula melaka (palm sugar) drizzled over the shaved ice, complete with thick and creamy coconut milk.

Like some Thai versions, they go a step further by adding bits of jackfruit which worked its mojo by balancing out the sweetness in the dessert with its distinct sour and slightly tangy taste.

We have in abundance food from around the world on our island, even within the same square area of a single kopitiam. Yet, I suppose we do lack places that serve up truly authentic cultural cuisines.

Tok Tok Indonesian Soup house is definitely a recommended place for some authentic Javanese food, especially for first-timers of the cuisine.