When one thinks of Melbourne, Australia, Instagrammable cafes and hipster coffee spots often come to mind.

It’s no surprise that when you visit Melbourne, it’s totally customary to go cafe-hopping. 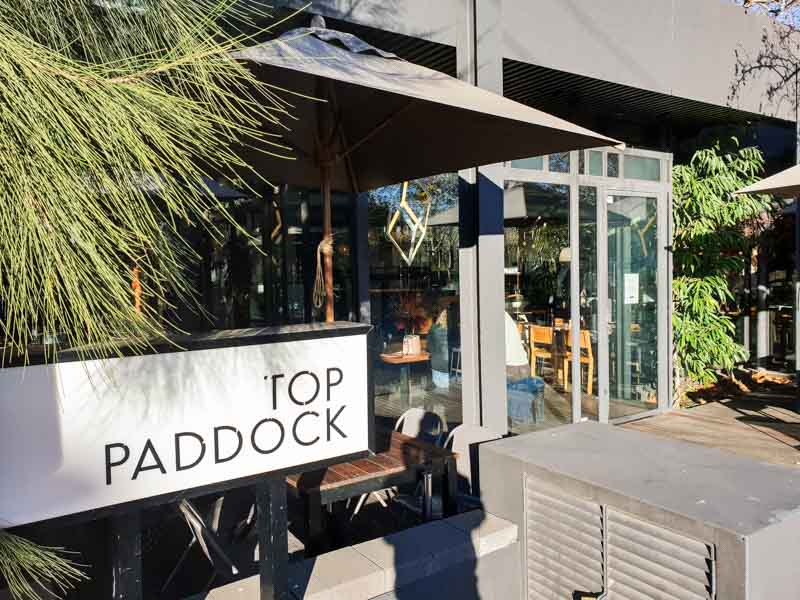 Of all the cafes, there is one which is particularly popular amongst tourists and locals alike.

I’m referring to none other than Top Paddock. 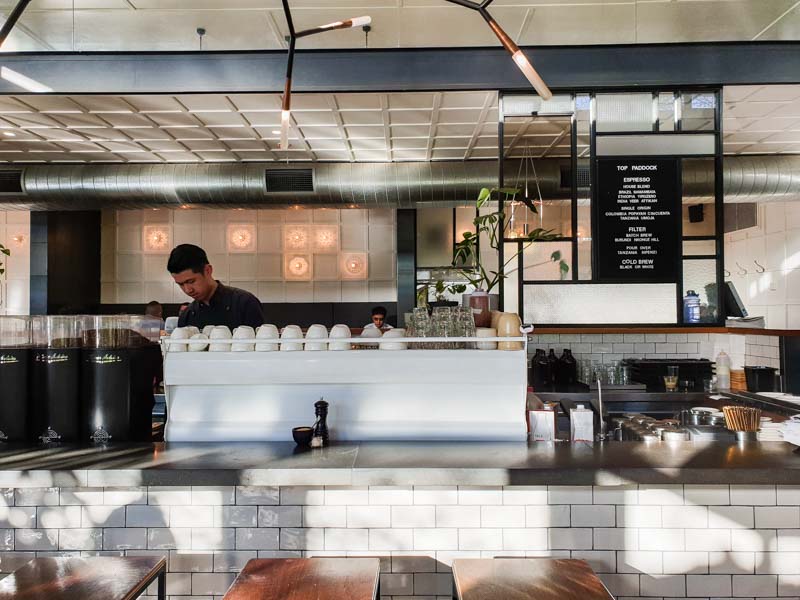 Located along Church Street, the cafe is just a stone’s throw away from the picturesque Royal Botanical Garden. Its hefty price tag intimidated me a little, I’ll be honest. However, it was the sheer massive size of the dish which had me utterly speechless.

The plate on which they served the hotcake was larger than my face, but that’s not all. 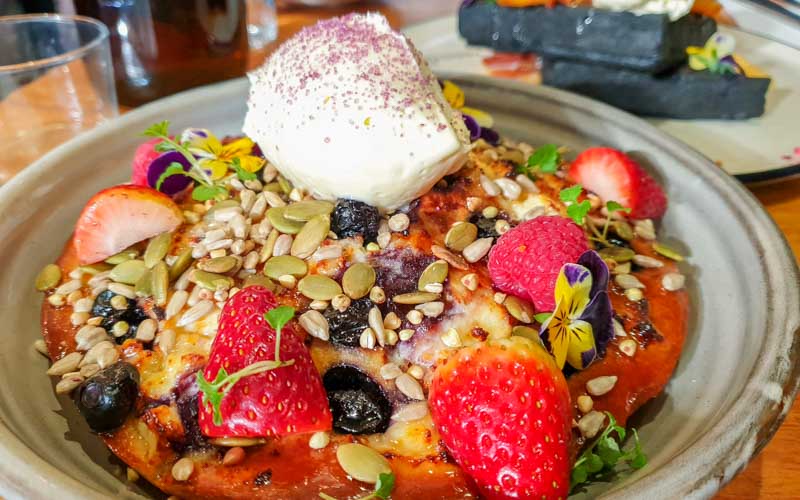 The depth of the plate (and hence the thickness of the hotcake) was about an inch thick! It’s no wonder they took so long to prepare the dish. 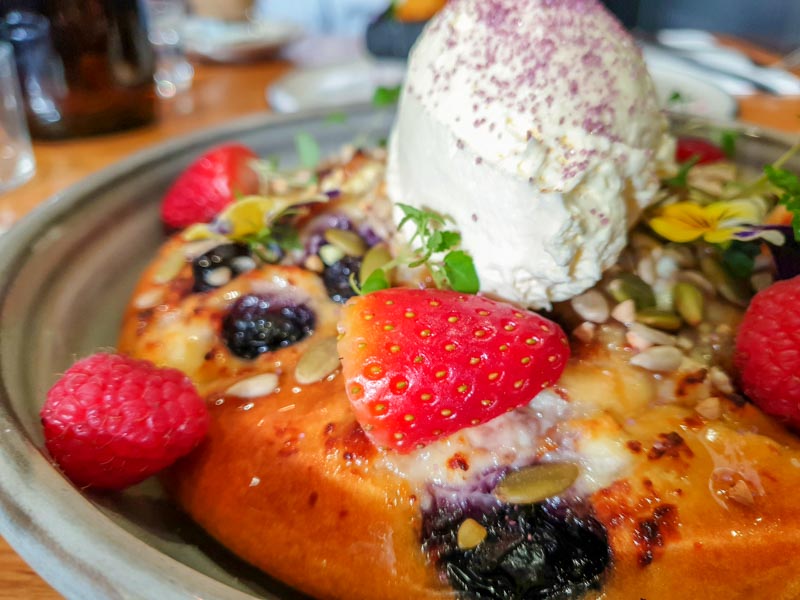 Vibrant and captivating, the colours on the plate got us very excited to dig into the hotcake. 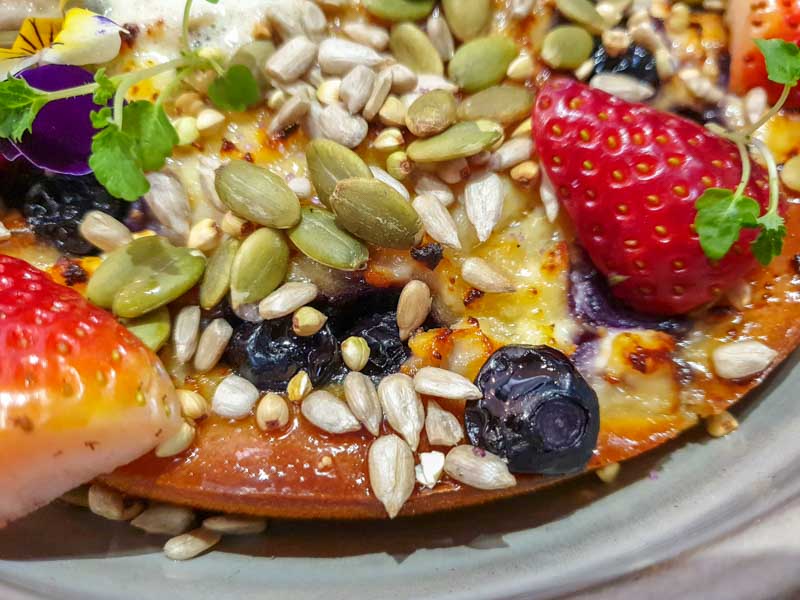 We could immediately identify several different fruits, seeds and grains scattered all over the hotcake. A dollop of cream and a drizzle of maple syrup then completed the dish. To our delight, the hotcake itself was as soft as a pillow. 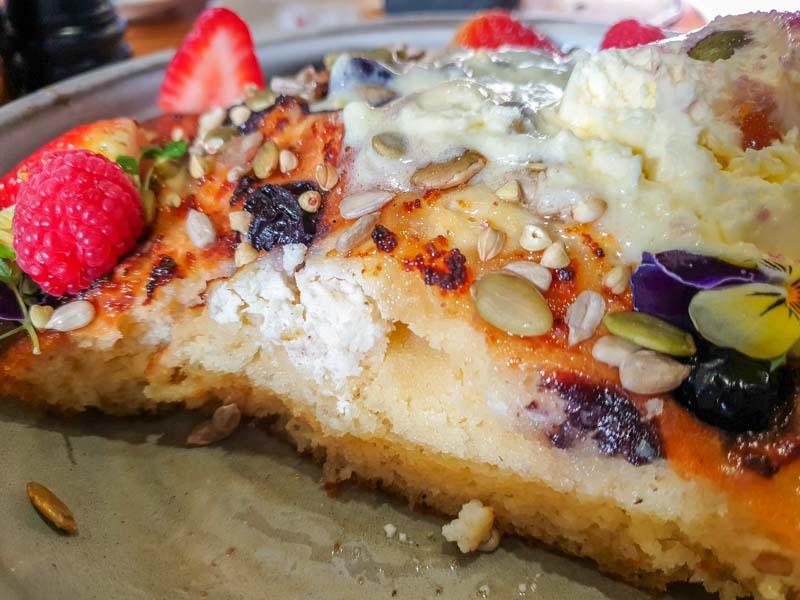 There were pockets of ricotta cheese within it, which oozed subtle savoury notes with every bite. 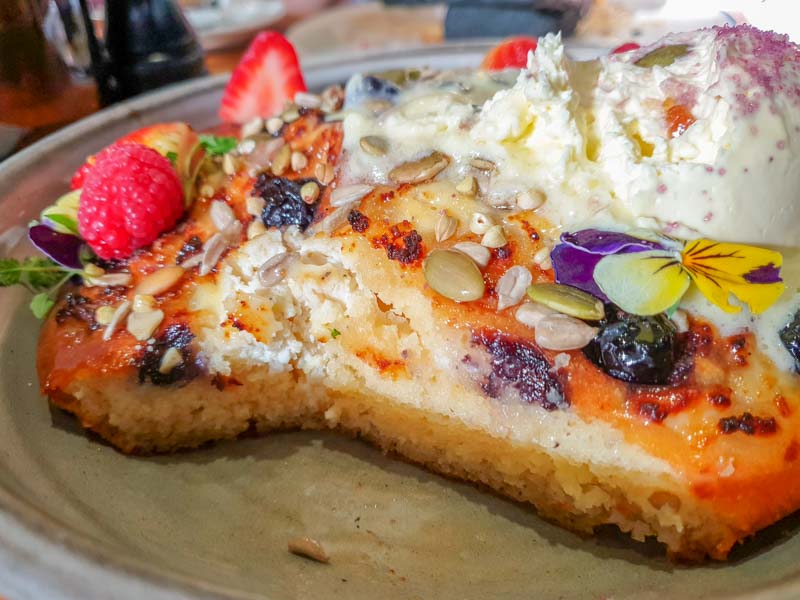 Not only that, but there was an abundance of blueberries too. Most of them had melted in the process of baking, making them delightfully gooey. 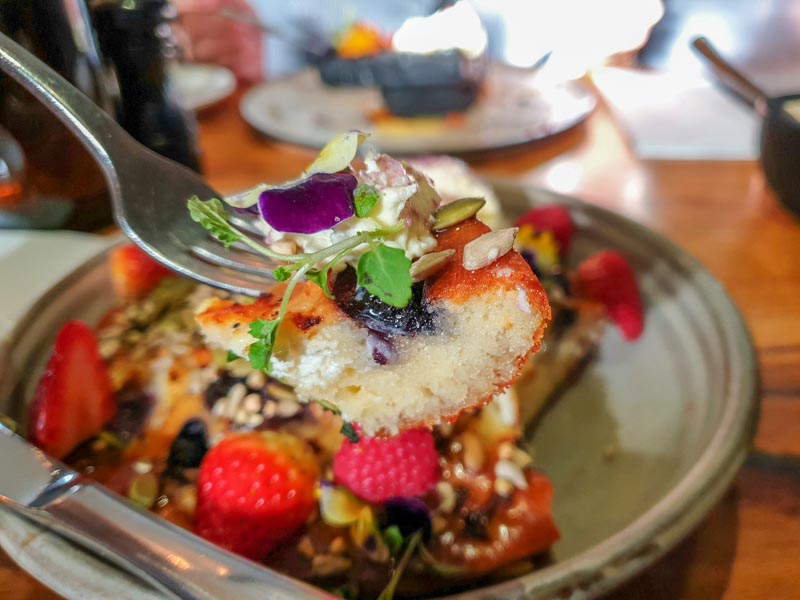 The seeds and grains gave a satisfying crunch in every bite as well. Their nutty flavours helped to cut through the admittedly rather sweet dish. However, the hotcake itself was rather dense, which made it super cloying. I was struggling to even finish half of this massive hotcake!

That said, if you’re planning to get this dish, make sure you have someone to share it with. The sweetness can get overwhelming after a while. 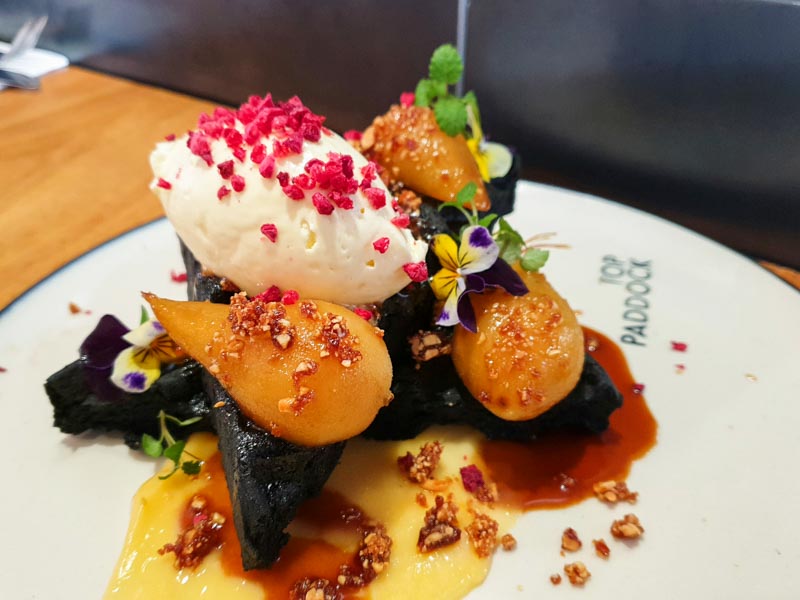 We also couldn’t resist the temptation and got the Buttermilk Waffle (AUD$21) too. 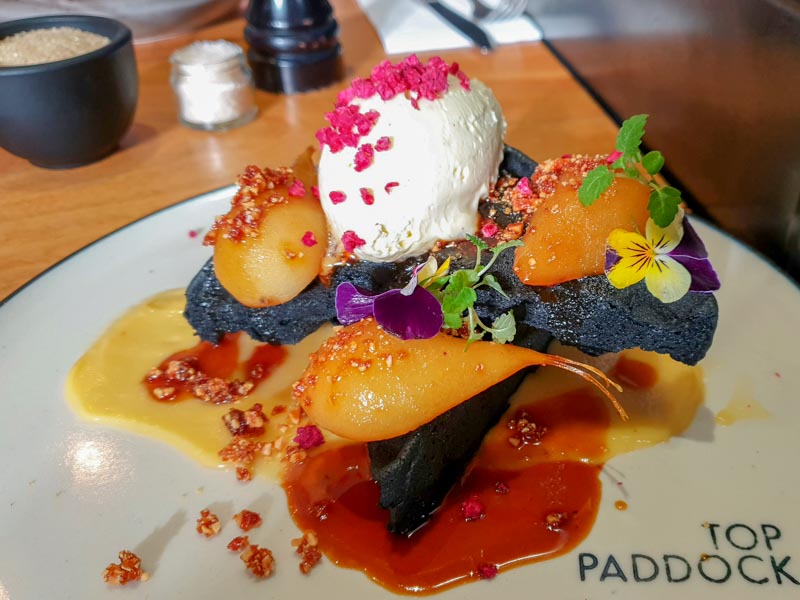 The black hue of the waffles caught us off guard since we were expecting it to be golden-brown as waffles usually are.

That said, though, Top Paddock managed to impress us with their plating again. 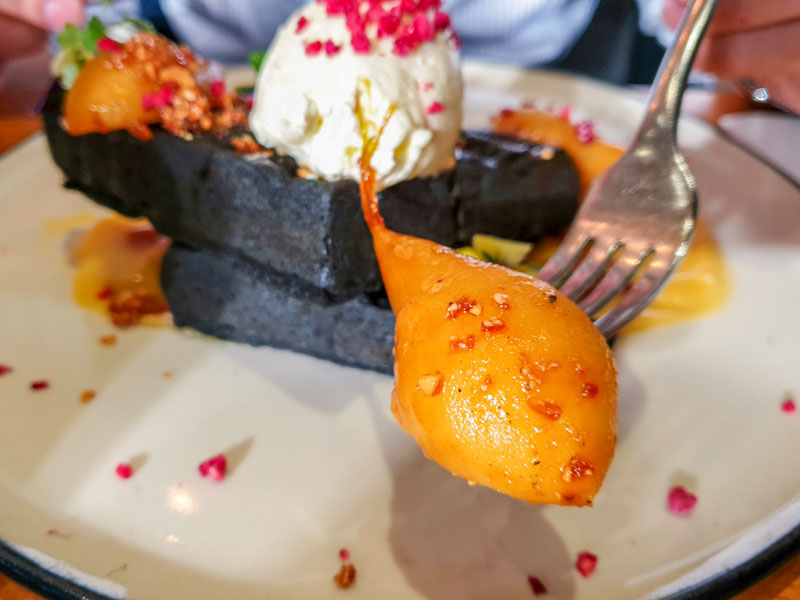 Despite the dull hue of the waffles, the bright, colourful and edible flowers and fruits provided a good contrast. Completing the dish was a hearty dollop of double whipped cream — the perfect indulgent topping. The waffle had a delightfully crunchy crust which broke into a soft and fluffy interior. However, we felt it really lacked the milky and buttery goodness that we expected of a buttermilk waffle.

As such, the waffle was actually rather bland. 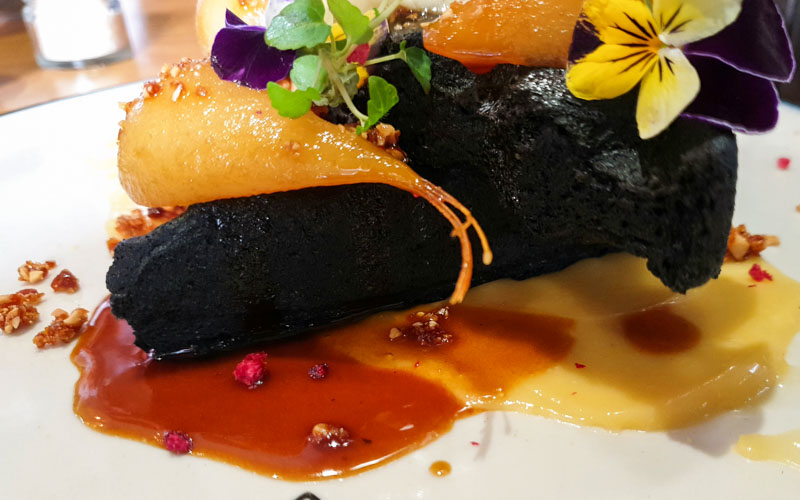 Fortunately, the luscious caramel sauce managed to bring some notes of sweetness to this dish. Together with the acidity from the lemon curd, these definitely made the waffle more palatable, I’ll tell you that! 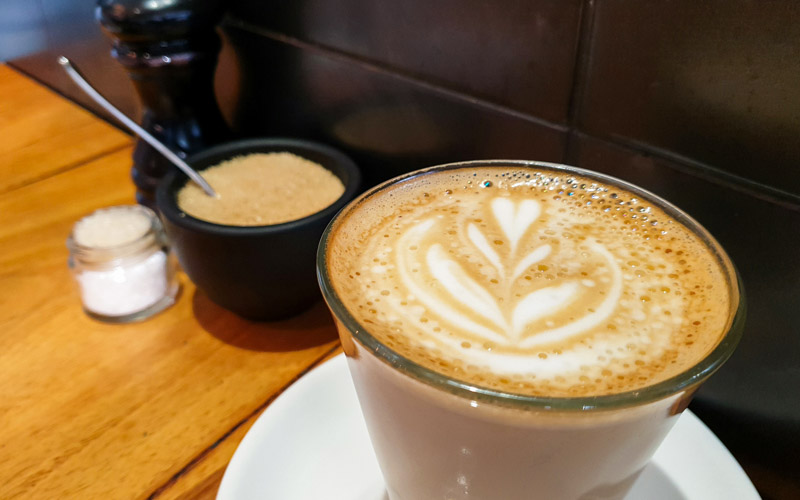 Oh and make sure you don’t leave Top Paddock without having a cuppa too. They serve up a rich and velvety Latte (AUD$4.20) that’s perfect for washing down all the sweetness. If you don’t already know, the Latte is one of the locals’ top three favourite types of coffee. You can be sure that Top Paddock brews a mean cup of latte. 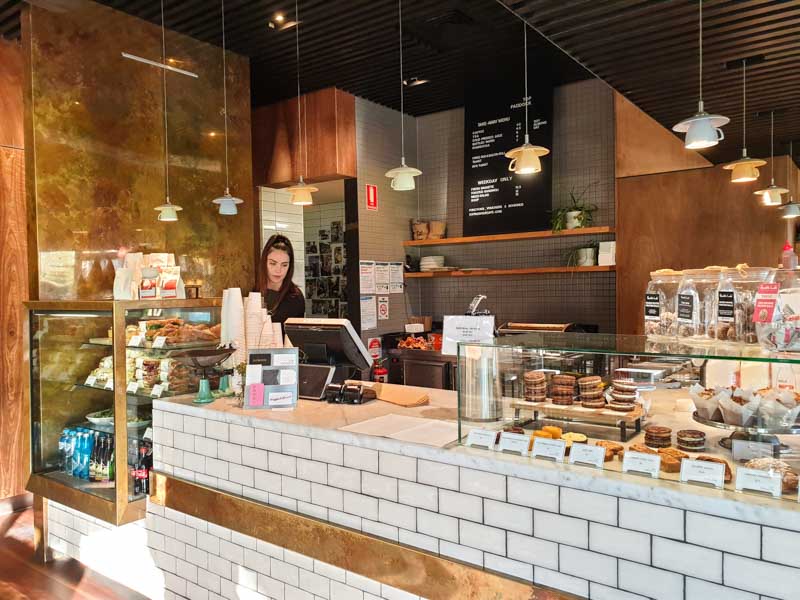 Perhaps my expectations were a little too high, but the food at Top Paddock didn’t really live up to the hype. But if you’re planning to meet with some friends over a cuppa in Melbourne, this is a suitable place. The minimalist decor and cool ambience made for an overall pleasant dining experience. Not only that, but the naturally bright space and surrounding lush greenery will also make your photos really pop.