Vistro: Truffle Flatbread With Cashew Cheese & Other Vegan Dishes At This Plant-Based Cafe In Bangkok

Finding vegan food in Bangkok can be a downright challenge—you’d be hard-pressed to find any dish without meat, seafood, eggs, and fish sauce, save for a few dedicated shops. At regular street stalls and restaurants, be prepared to make do with a boring plate of stir-fried veggies. Vistro is attempting to change that. The plant-based cafe and restaurant opened in the later part of 2019 in downtown Sukhumvit Soi 24, down the road from the BTS Skytrain station Phrom Phong. The first floor of the plant-filled shophouse has an ice cream stand full of vegan ice cream made with coconut Mylk (dairy-free plant-based milk) and we couldn’t wait to try some for dessert. Resist the temptation and head up the concrete stairwell to get to the actual bistro on the second floor. This light, airy space is full of greenery and eager vegan brunchers, usually the expat crowd. 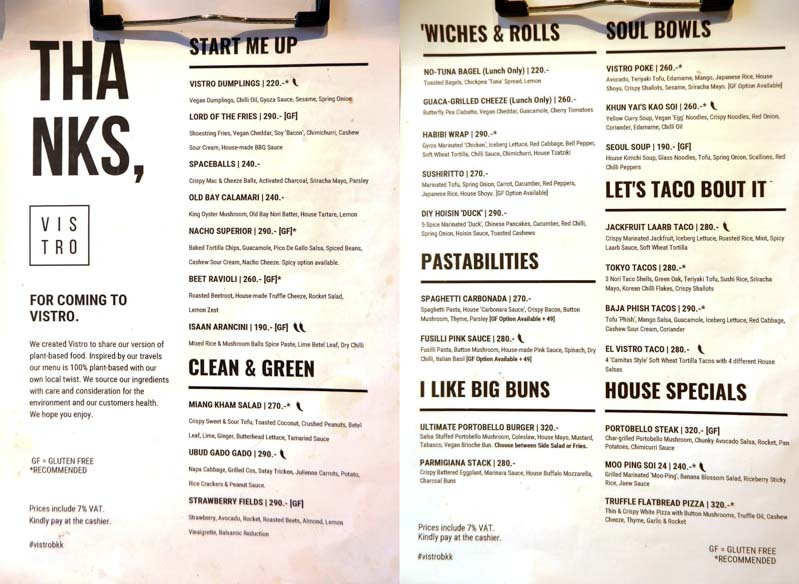 Even a meat-eater like myself (who swears never to become vegan) was impressed by the large menu of international fusion dishes. Plus, with such a variety of ingredients, I barely noticed the absence of meat. 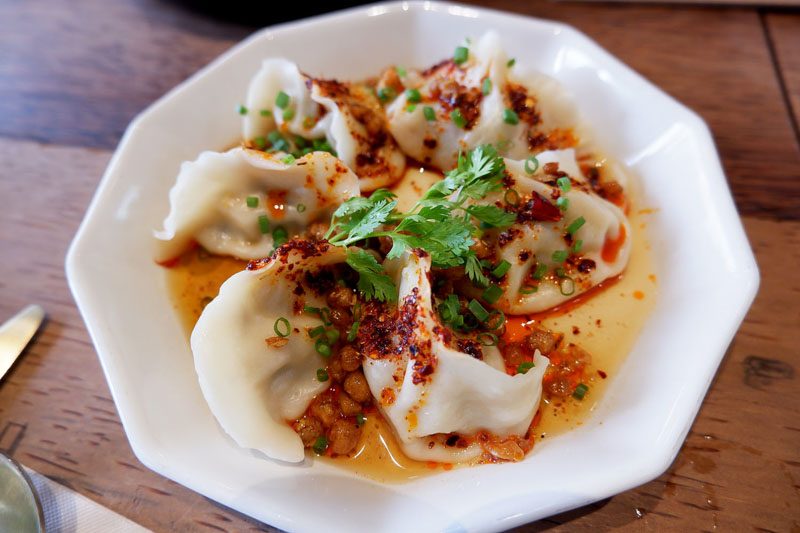 We started our meal with the Vistro Dumplings (THB220), a cluster of six dumplings filled with crunchy veggies and tofu. The dish was topped with spicy chilli oil that paired really well with the zesty kombucha vinegar dressing. Fried soy protein bits added a bit more crunch.

While this starter was good, it was gone in no time and we were left wanting more. I also kept thinking that we could easily get non-vegan gyozas in Thailand for at least half the price. 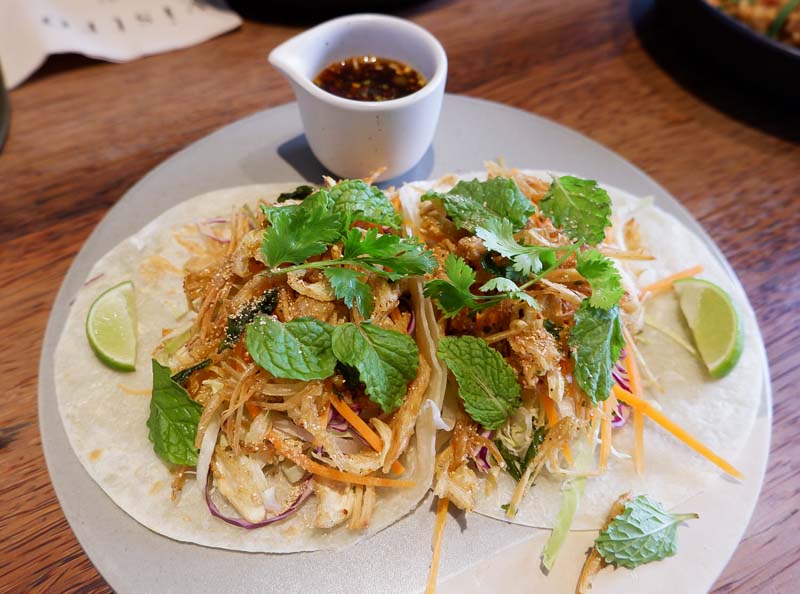 Hankering to try more vegan dishes, we went straight for the Jackfruit Laarb Taco (THB280), curious to see how a taco filling made with the stringy fruit would fare.

Although light and refreshing, the tacos were a slight disappointment since the jackfruit was quite tasteless and really needed the larb seasoning. The sauce was also quite overpowering.  We would recommend trying something else for that price tag. Seeking to redeem the meal with a heartier, Italian-inspired dish, we opted for the Truffle Flatbread Pizza (THB320).

The crispy white pizza, cut into eight small pieces, is topped with button mushrooms, truffle oil, cashew cheese and rocket leaves. The fragrant truffle aroma hit us the moment the dish was served. 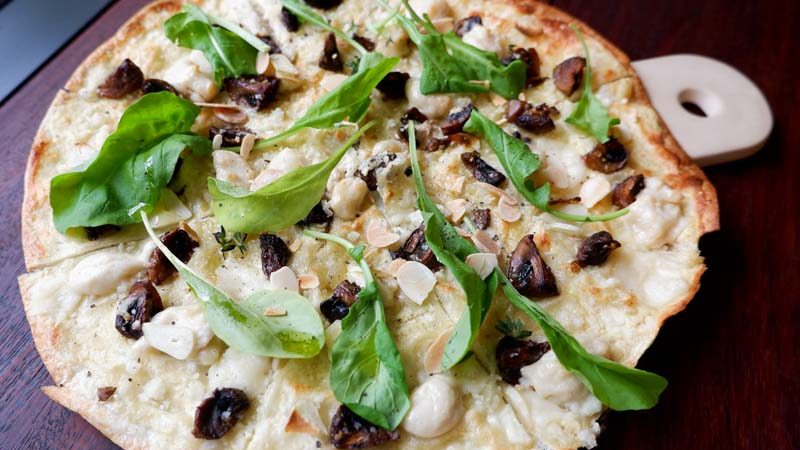 The rocket leaves really brought out the flavour of the creamy cashew cheese. Unlike dairy cheese, vegan cheese doesn’t stretch and has a more neutral smell. The various components in this dish definitely worked well together. 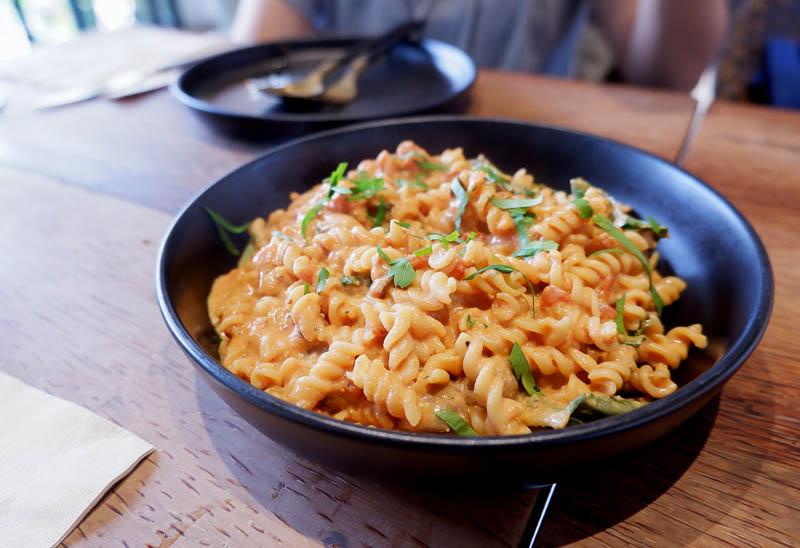 Continuing with Italian, we also had the Fusili Pink Sauce (THB 280) which impressed us the most that day. Curly fusilli was covered in a comforting, house-made pink sauce featuring a few button mushrooms.

The pasta was cooked al dente and I really enjoyed the slightly tangy flavour of the sauce. A gluten-free option is available for an extra THB49. 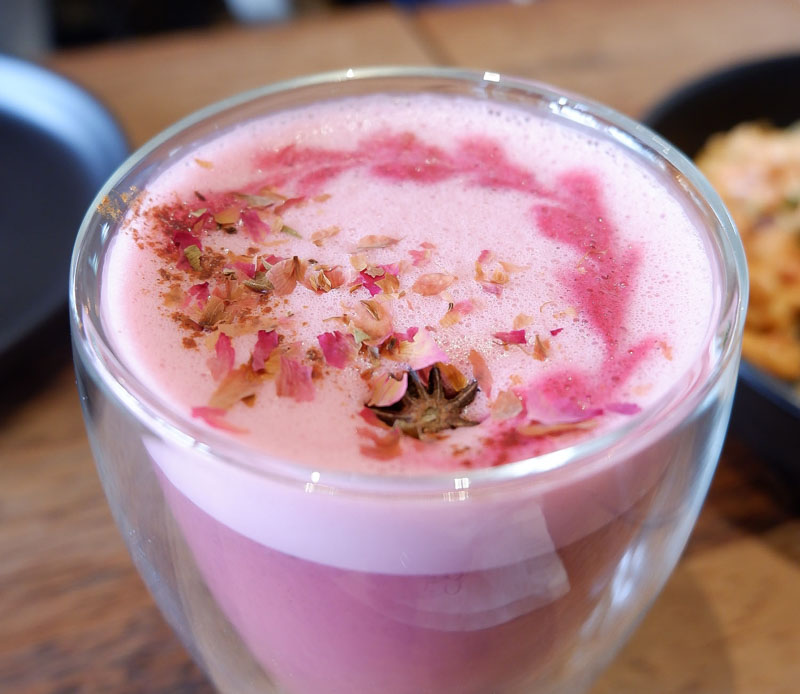 We decided to go for a few colourful drinks and first tried one of the superfood lattes, Pink Chai (THB135). It was a warm cup of coconut Mylk made pink with beetroot, cacao syrup, and spiced with chai spices such as star anise, cloves, and cardamon.

Coconut Mylk, not to be confused with condensed coconut milk, is made by blending coconut water and coconut flesh together. The drink had a powerful coconut flavour, and I’d compare it to a warm tropical hug. 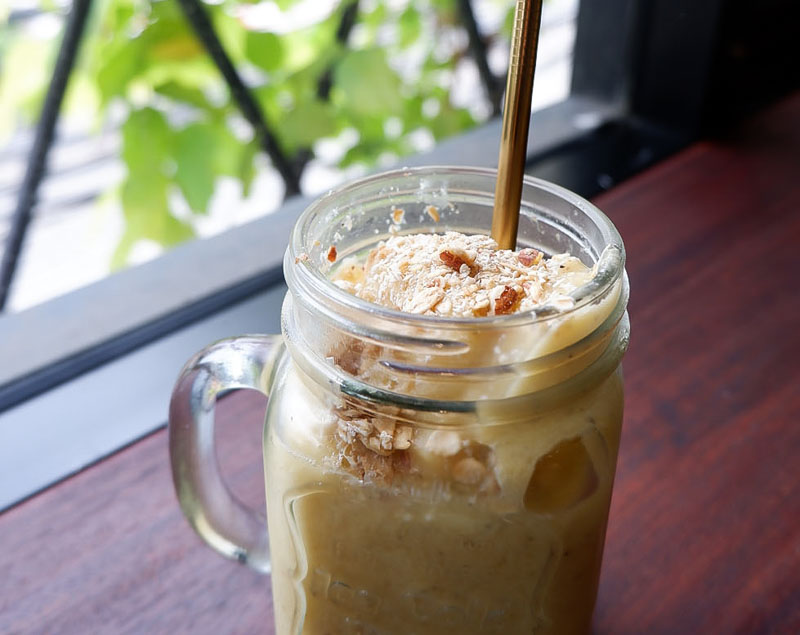 Both the smoothies we tried—the Flight to Paradise (THB 220, pictured) and the Garden Gangsta (THB 220)—were extra-thick, rich smoothies, although not worth the steep price tag.

The Flight to Paradise is a passionfruit, banana, pineapple, mango, and coconut water mix that was tropical, with the tangy passionfruit standing out the most and the rest of the fruits forming the smoothie’s texture. 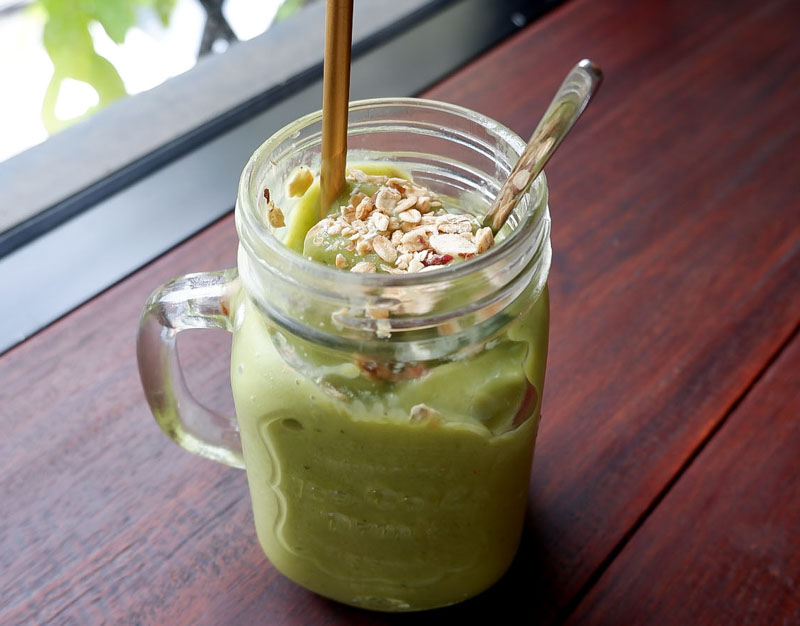 The green, Garden Gangsta featured avocado, broccoli, passionfruit, mint, and coconut water. I could definitely taste the avocado and passionfruit the most and really liked the consistency. I knew when I arrived that I wouldn’t leave without ice cream and so, ended the meal with the Thai Tea Vegan Ice Cream (THB 75). This was a winner after sampling the other available flavours like banana, coconut, matcha, and chocolate.

Pale-orange in colour, the Thai tea flavour was milky and fragrant with a strong coconut taste, since the ice cream uses coconut Mylk. There were also small, chewy mochi balls in the ice cream which made it even more delightful.

Vegans, vegetarians, and other herbivores in Bangkok will most likely make Vistro their new plant-based cafe haven—although perhaps not their most frequent one, due to the rather steep prices for a full meal. We recommend going with friends in order to split the damage.

After trying it as a carnivore, I do appreciate the fact that Vistro’s dishes aren’t the cliché, tofu-and-salad dishes found at many other restaurants in Bangkok with vegan/vegetarian options. Going cruelty-free doesn’t have to mean boring food and this is definitely a step in the right direction.