“Voyage represents my own journey and the experience that we want to bring our customers on, through the food that we serve in our restaurant”, says Chef Jonathan—owner and head chef of Voyage Patisserie when I ask him on the naming of his brainchild. 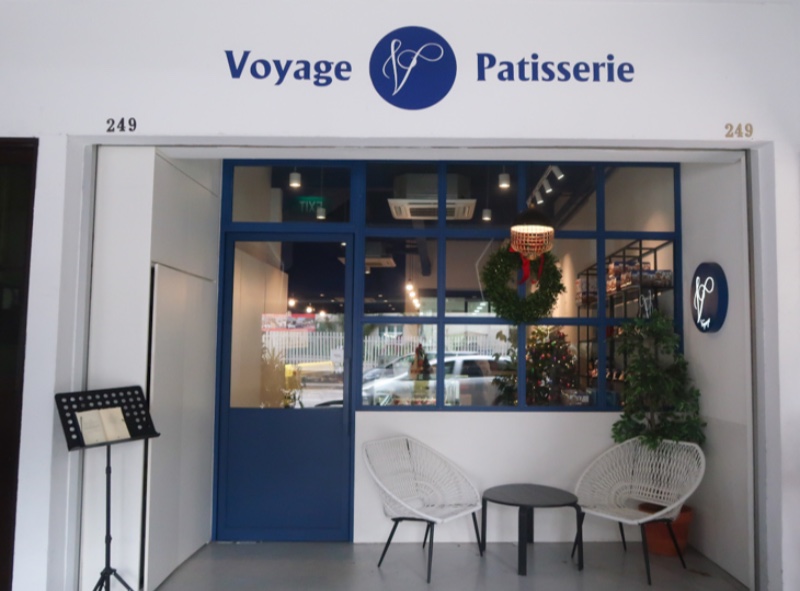 Situated along the row of shophouses at Outram Road that is mostly dominated by well-known zi char stalls such as Long Ji Zi Char and Tian Tian Seafood, Voyage Patisserie stands out like a rose amongst the thorns with its quaint, minimalistic white and blue shopfront. The establishment was clean and polished with the extension of the use of nautical colours into the interior of the dining area. ‘Voyage’ is engraved on white flushed walls and the cemented flooring against furnishings with wooden accents set the tone. It’s stylish and chic, without trying too hard at all.

My partner and I chose to sit towards the back of the restaurant, an area that is blessed with skylight, overseeing the kitchen through a rectangular plane window. Just as we settled down, Chef Jonathan made his way to our table.

He handed us the menu and also explained the concept of the restaurant. Unlike its name, Voyage Patisserie’s menu items are not limited to cakes, desserts and pastries alone. With his years of experience in the fine dining scene—Chef Jonathan previously worked in France for two years before coming back to Singapore and was part of the now-defunct OCF restaurant at The Arts House—Chef Jonathan hopes to introduce causal fine dining to the heartlands, presenting dishes made with quality imported ingredients. Apart from his regular menu items, Chef Jonathan introduced a few off-menu dishes which he created using seasonal produce imported from France. Inspired by Chef Thomas Keller of The French Laundry, these seasonal dishes are updated every few weeks depending on what’s available. “Having constantly changing items spices things up for us in the kitchen and ensures that regular customers always have something new to look forward to”, explained Chef Jonathan as he pointed to the display of autumn vegetables on the counter. 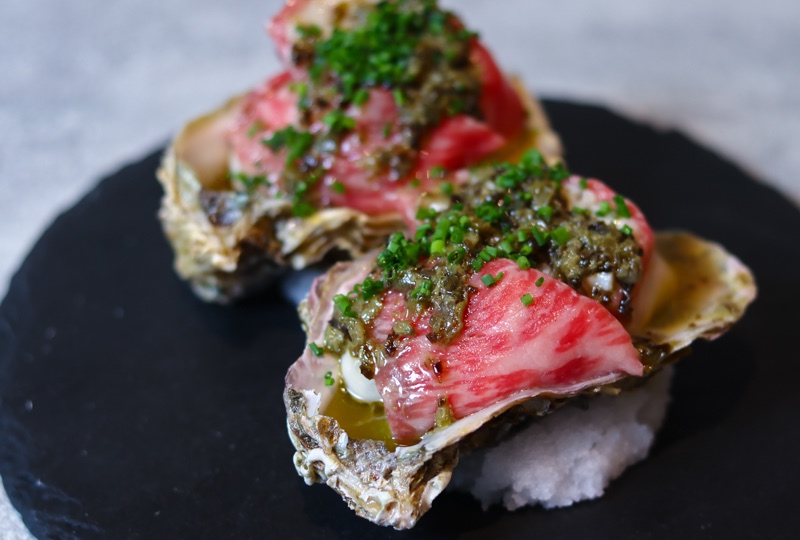 Our meal started with a seasonal dish,  the Wagyu Oyster (S$40 for two)—lightly steamed Canadian oyster wrapped with a beautiful slice of marbled Japanese aged wagyu beef. This dish itself was a beauty.

Just the contrast between the pinkish wagyu and fresh green parsley sitting on a juicy oyster bathed in oily caper vinaigrette made my mouth water. 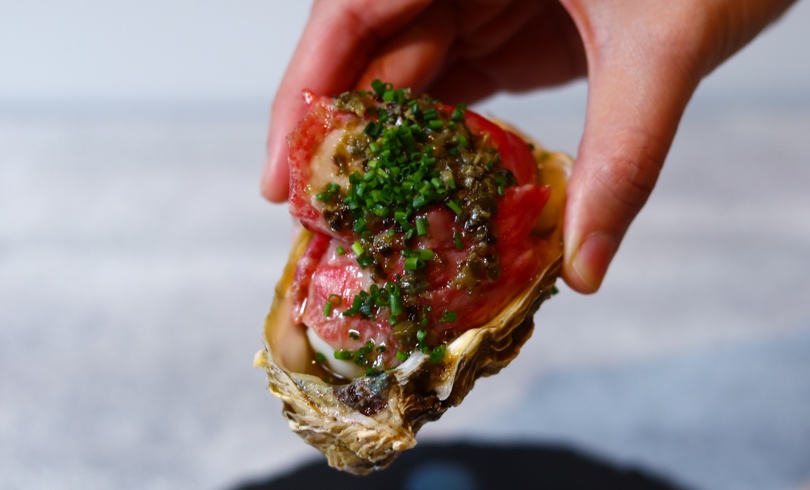 It seemed challenging to eat at first, but later I realised that the oyster was thoughtfully cut into halves and assembled back together seamlessly. One bite in and I immediately knew that this was a taste I’d never forget.

The beef was so tender it melted in my mouth after a few bites, revealing the sweet and coppery taste of the oysters. The caper vinaigrette added a tinge of acidity which cut through the creaminess, leaving me yearning for more. 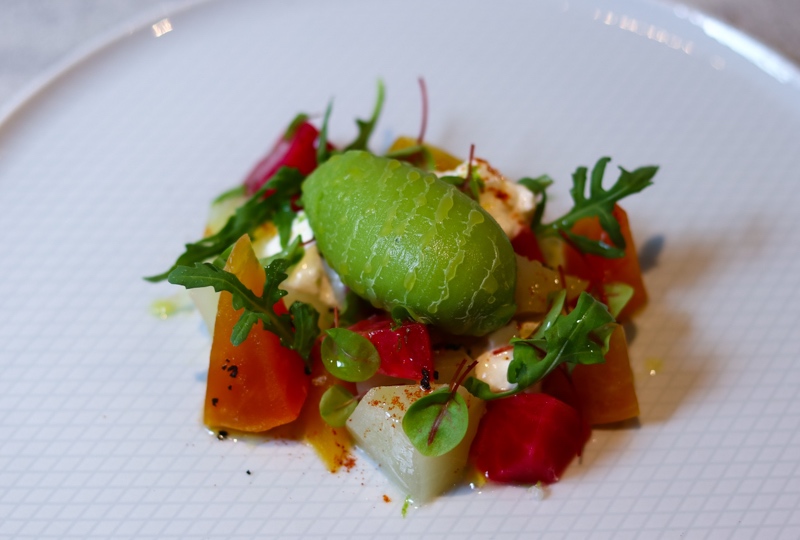 Beetroots have always been my nemesis since young, but my relationship with this bloody root vegetable has seemed to take a turn after we were presented the another of their special menu item, Heirloom Beetroot Salad (S$35). 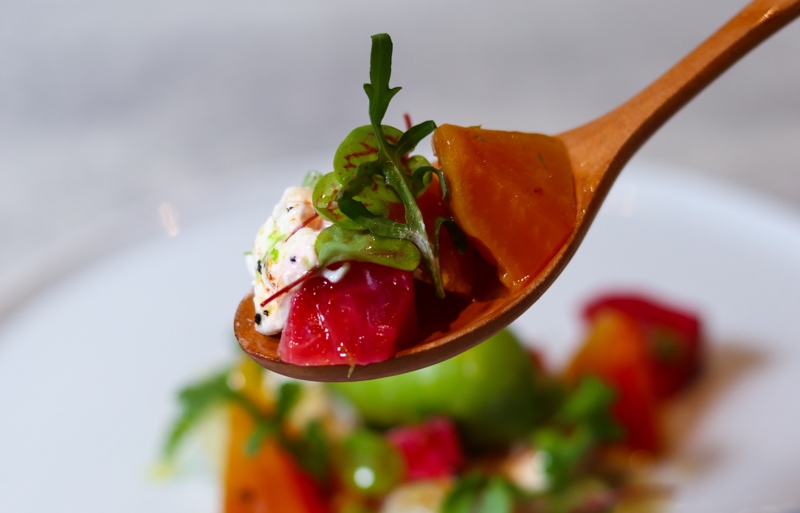 At first glance, the dish seemed more like a dessert than a salad, all thanks to the quenelle of basil sorbet sitting on top of the tri-colour heirloom beets. The beets were, to my surprise, sweet rather than earthy, and the white beet, in particular, tasted so much like a softer version of water chestnuts.

I had a mouthful of all the elements—beets, burrata cheese, arugula, basil sorbet—and could feel the different octaves of temperature, textures and tastes dancing in my mouth, leaving me feeling refreshed and delighted. 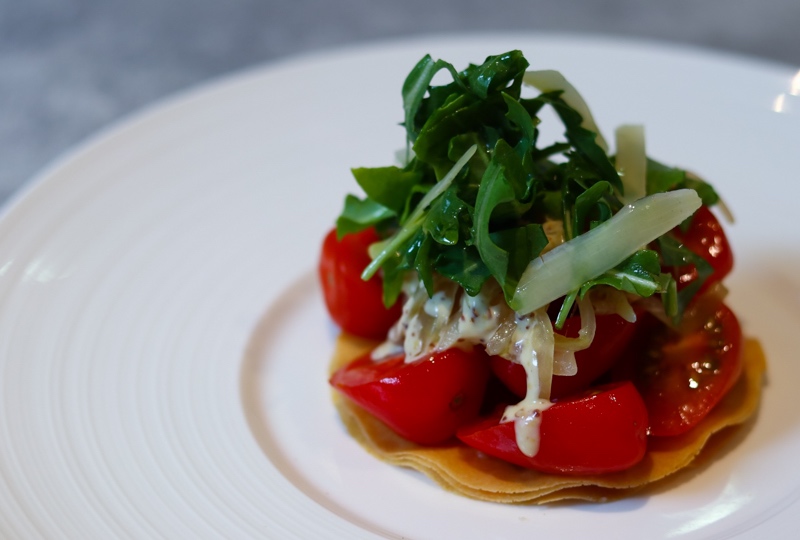 Off the regular menu, we ordered the Rabelais Tomato Salad (S$18). Although this dish did not look as sophisticated compared to the prior, it was equally delectable. Unlike regular cherry tomatoes, Rabelalis tomatoes are grown under greenhouse conditions in France, making all the tomatoes equally plump, regular in size and sweeter in taste. 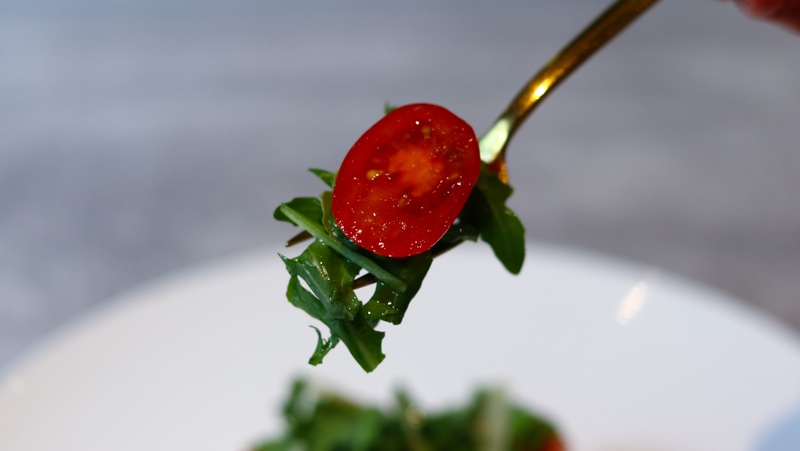 Its crunchy texture paired wonderfully with the pickled onions which were not overly vinegary, showcasing a contrast in flavour that is charmingly addictive. 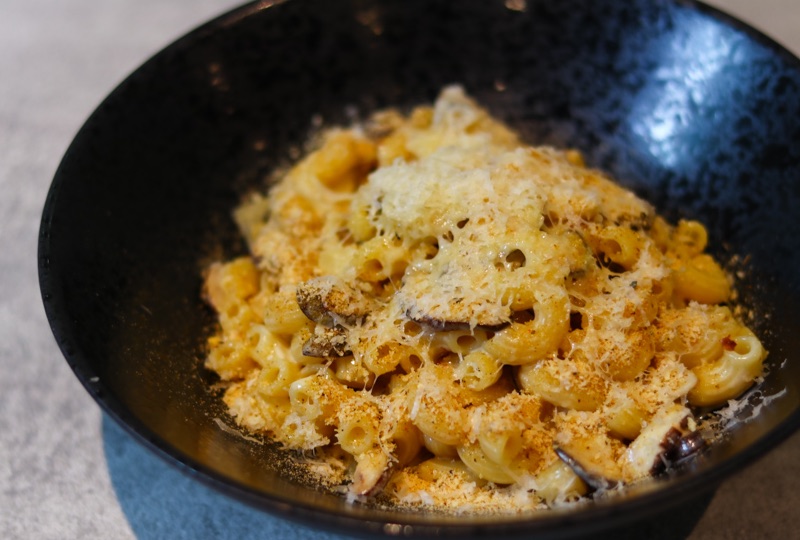 Moving on to the mains, we opted for a vegetarian option—Wild Mushroom Macaroni (S$15)—which was the restaurant’s take on the classic English favourite, mac and cheese. 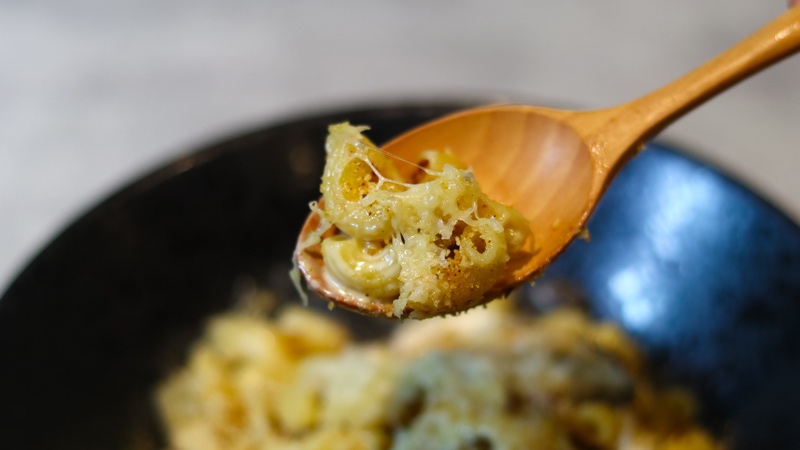 The mornay sauce (a béchamel sauce with shredded or grated cheese, usually gruyere) coated every single piece of macaroni evenly without being too overpowering and rich. There was just something that Chef Jonathan did with this dish that brought out the deep earthy character of the wild mushrooms, so much that I felt as if I could taste the forest it was grown in.

What made me truly fall in love with this dish was the aftertaste; that unique fragrance of mushrooms that stayed and lingered in my mouth even after we devoured the entire bowl of creamy goodness. 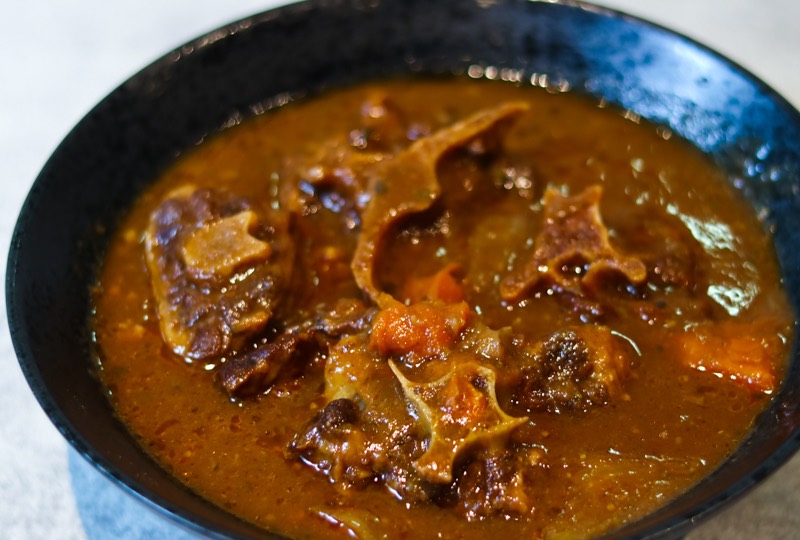 If you are looking for something hearty that will warm your soul in an instant, Country Style Oxtail (S$28) is exactly the dish you are looking for. Put it simply, it was deep, rich and satisfying. By this time, I was forgoing my dainty lady image as I was using my fingers to get all the tasty bits out and sucking on the bone, enjoying the unctuous mouthful that was somewhat pleasurable. The dish came with a side of country toast which was baked to perfection. Dry and crisp, all ready to soak up the brown gravy of the Country Style Oxtail.

The trip to Voyage Patisserie would not be complete without trying their desserts. Being a bona fide dessert lover, I just had to order more than one of their desserts to try.

I was told by their service staff that the soufflé was a must-try and thus, we ordered their Caramel Soufflé (S$20), a new flavour that has yet to make its way on to the menu. Having made soufflés myself, I do know how daunting the task is to get the egg whites to rise after baking to the desired height for it to be considered sexy-enough-to-impress.

When the Caramel Soufflé was placed in front of me, I was impressed. Impressed not only by its height but also how evenly coloured and flawless its surface was. The soufflé was light, airy and had a distinct burnt sugar taste to it that is so addictive, making it a wonderful pairing with the smooth and creamy caramel ice cream. 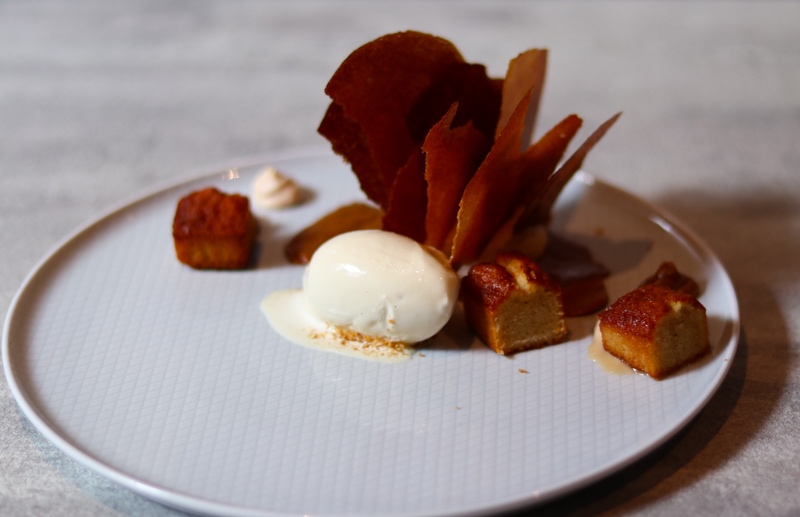 When Buckwheat (S$15) arrived at our table, I was surprised as it looked totally different from what I expected. Described as ‘a Mille-Feuille (thousand-sheets) of buckwheat and almond’, this was a deconstructed take of mille-feuille, with broken golden brown puff pastry stacked like dominos, on buckwheat praline and cubes of brown butter financiers randomly scattered around the sides of the plate.

The puff pastry was thin and crisp, mainly used as a medium to scoop and consume with the buckwheat praline. What stood out in this plated dessert was the hay ice cream. Yes, you read it right: hay ice cream.

This ingenious ice cream had the fragrance of musk and a slight woody, grassy taste that reminded me of an early morning walk in the park with the lingering scent of the morning dew. 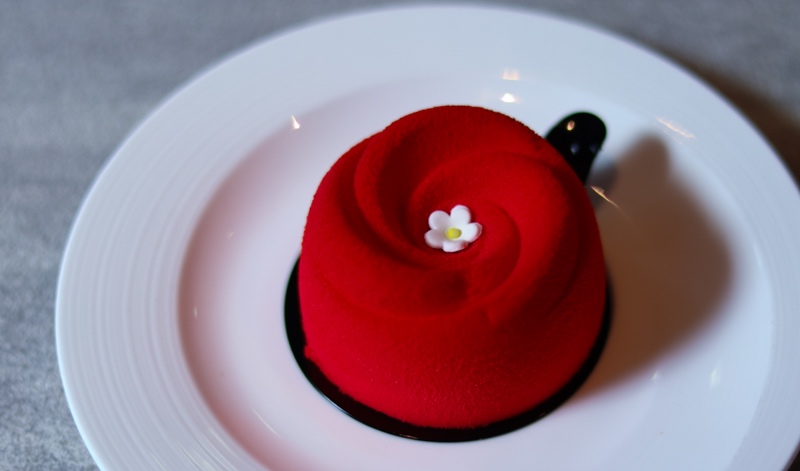 Our final dessert was off the display cabinet, Voyage Patisserie’s signature cake, Cynthia (S$9), which was dedicated and named after Chef Jonathan’s true love. This beautiful rose-shaped cake that comprises of rose chantilly cream, lychee bits, raspberry gelee and genoise sponge was delicate in texture and flavour.  As much as I enjoyed the sourness of the raspberry gelee in contrast to the sweetness from the chantilly, I wished that the fragrance from the rose could be stronger and more distinct.

Voyage Patisserie might not be the most convenient place to visit, but it is a restaurant that I would definitely make return trips to again and again out of curiosity.

With Chef Jonathan’s passion in his craft and willingness to push beyond his boundaries using all the seasonal produce he can get his hands on, I can’t wait to share his creations with my friends and family.

Previous articleThai Baàng Bakery, Lavender: “Biting into it flooded memories of kaya butter toast made by my grandfather”
Next articleYour Last Chance To Score Deals On Popular Ice Cream Flavours At Cold Stone Creamery Singapore Before It Closes On 31 Jan