You’ll find Wanton Noodle House amidst the other eateries at Bedok Market Place, and while the shop just opened its doors here in 2016, it has a longstanding history since the 1980s.

With a simple signboard and exterior, you’ll easily spot its outstanding red awnings when you’re there in the evening. 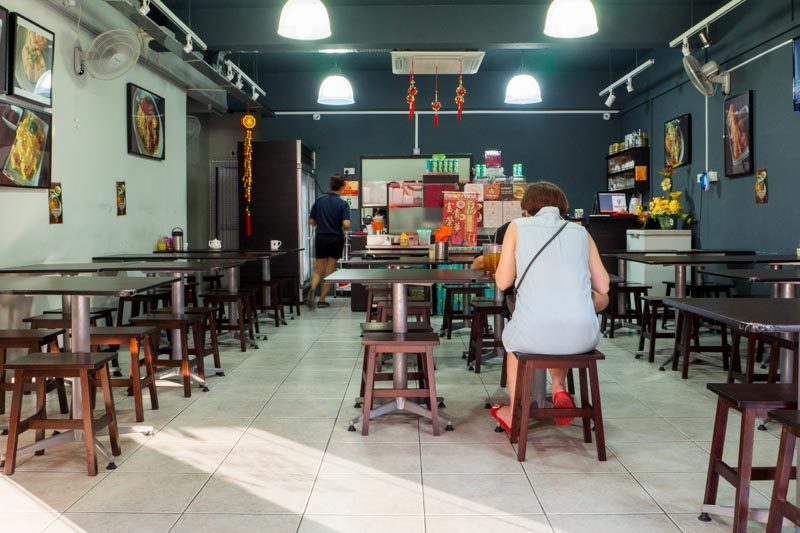 You can choose to dine indoors or enjoy the breeze outside after the sun has set.

The interior adopts the same simple decoration as the exterior and after a quick glance at the photos of the dishes on the wall, we were set on what to order. 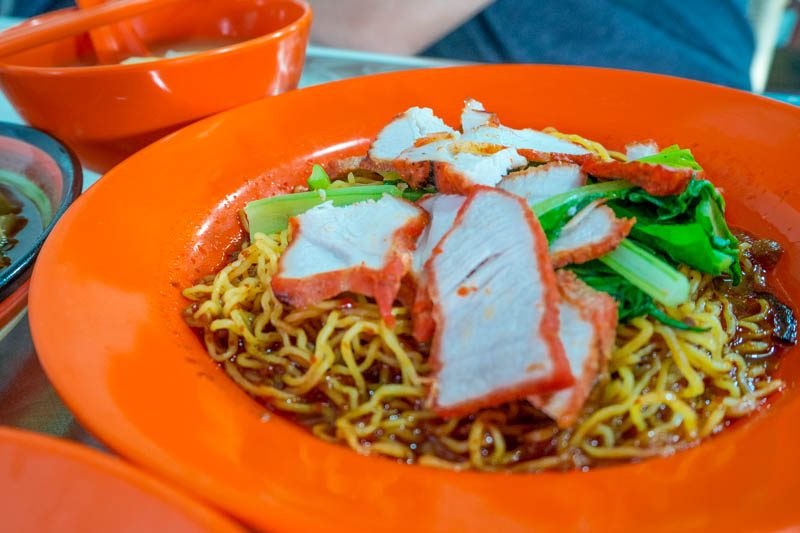 It would be a sin to not order a plate of Wanton Chasiew Noodle (Dry, $5) at a shop that named itself after the dish. So, we opted to have it with chilli, which coated every single noodle strand, along with the speciality sauce; a homemade recipe that has been passed down for three generations. 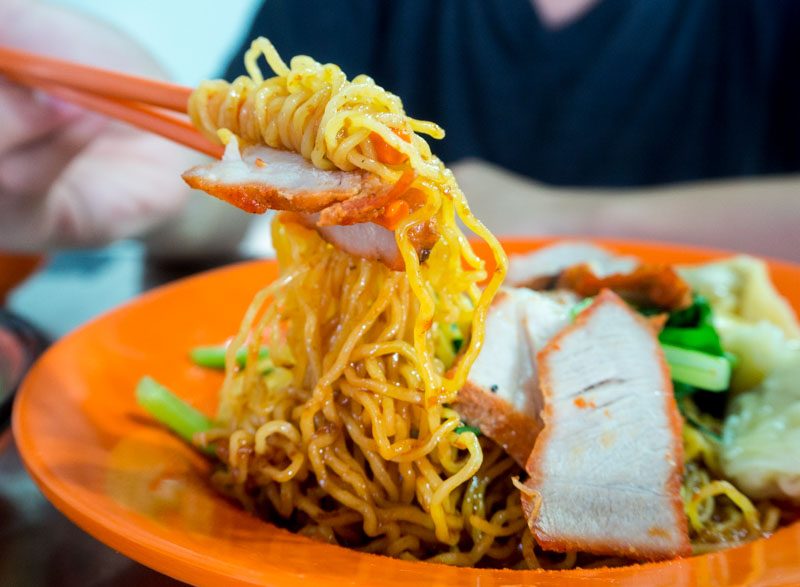 While the noodles were springy and doused in enough sauce (just the way I like my dry noodles to be served), it was nothing to write home about.

They were generous with the char siew, and it was served with three wantons in the soup. Honestly, it was average at best, and could have had more flavours to stand out from the other wanton mee dishes out there. On the other hand, the Shrimp Dumpling Noodle (Dry, $5) was a tad more satisfactory. The dumplings were wrapped in a silky and smooth dumpling skin, and the filling had more to boast in terms of its flavours as compared to the sauce in the noodles.

However, for the price we paid, we would have enjoyed it better if the shrimps weren’t chopped up into such tiny portions. 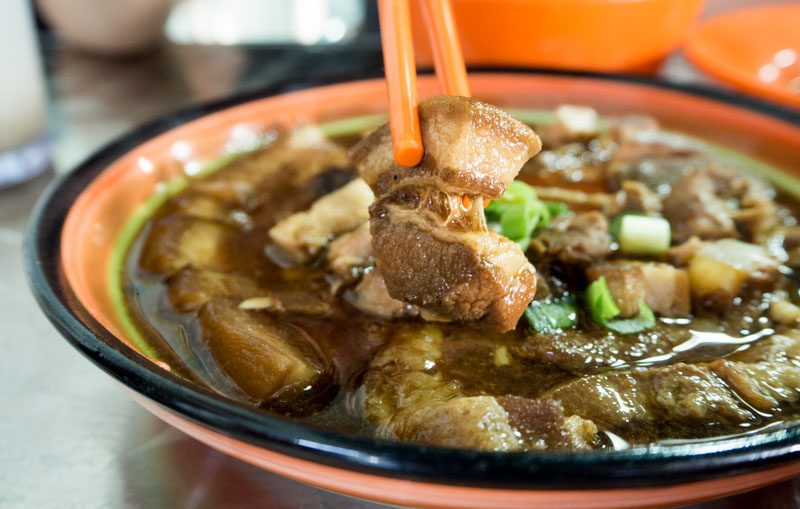 The Braised Pork ($7) reminded me of home cooked food, with the pork belly braised till tender and marinated well. The sauce was thick and aromatic from the spices used, and I would have wiped the bowl clean if our stomachs still had room for a bowl of rice. Slightly disappointed with the wanton mee, we thought we’d give the Fried Wanton ($5) a chance to, hopefully, justify our purpose for travelling to the far East of Singapore.

Thankfully, this was the shop’s much needed saving grace — the wantons were fried till crisp and golden brown, while the filling was fragrant, albeit still a tad too little. The chilli is definitely worthy of a mention; slightly tangy, garlicky and sweet at the same time. It’s what you’d usually have with ngoh hiang, but unexpectedly elevated the taste of the fried wantons too.

The staff told us that apart from garlic, grounded peanuts are sprinkled on the top to add depth to the chilli. You can request for a serving of salted egg yolk dip too, which had unfortunately run out when we were there. 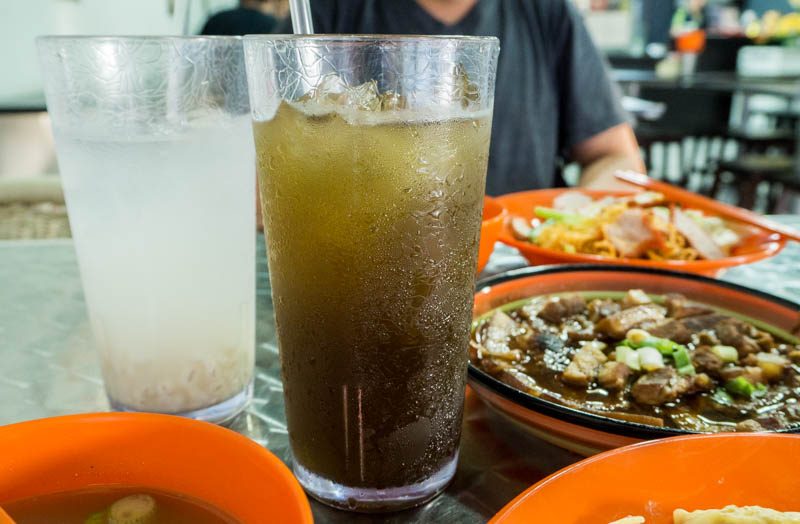 Promotions were plastered on the walls too, but it’s not stated when it’ll end. When you purchase a bowl of signature noodles, it’ll come with one complimentary drink of barley, water chestnut or lime juice.

Dubbed as the “Best wanton mee in the East”, I beg to differ. But, to each their own taste, so drop by to try it out for yourself.

I know for sure that I won’t be planning another trip down to dine at Wanton Noodle House, and would probably be happier filling my tummy at the other usual haunts when I’m next at Simpang Bedok. 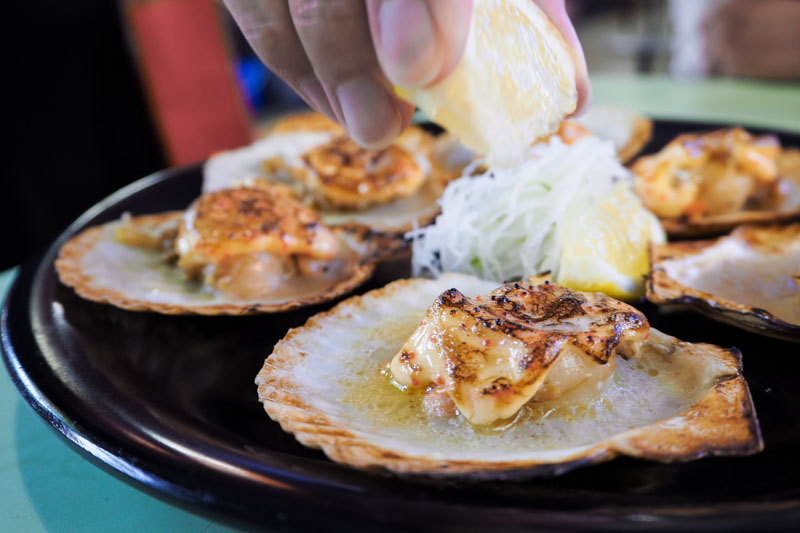