Another hip little cafe/bistro has sprouted in Ang Mo Kio, seemingly the fertile heartland for younger local ventures to burgeon.

The Workbench is a chic new establishment which has opened its doors to a heartland full of kopitiam wonders. Are they prepared for the competition that not only the saturated cafe scene poses, but also from the myriad of other food options a stone’s throw away? I’ve been invited to test the food The Workbench offers to see if it can stand the test of time in Singapore’s gruelling F&B industry.

The Workbench Bistro has a simple, clean-cut exterior with an all encompassing industrial theme – a common to-go decor for restaurants/ cafes these days and I ain’t complaining. An industrial touch hardly goes wrong. With hanging bulbs and statement pipe pieces, its modern theme is much welcomed. Crab meat pasta is one of Workbench’s signature dish.

The tomato sauce is herby, sweet and tangy, covering all strands of pasta adequately. Some crab meat has been blended inside the pasta sauce while a huge scoop of it is left on top for the purpose of allowing the eater to feel and taste actual crab meat.

While I definitely can feel the crab meat now, the pasta is just average. Sure the sauce was kinda tasty – made with white wine, herbs and all – and wasn’t just canned Prego sauce, it just wasn’t a blow-your-mind away kind of pasta.

A decent price with a pretty big portion but considering it is a neighbourhood area, perhaps price could be a tad lower for residents. If you’re still onto the salted-egg yolk bandwagon in Singapore, good news for you, apparently food creators still are too.

With the success salted-egg yolk dishes have been gaining, The Workbench has come up with a few dishes to tap on that too.

One of the creations they’ve came up with is the salted-egg yolk chicken pasta.

Many generous cubes of succulent grilled chicken accompany the pasta. The salted-egg yolk sauce though evidently coats every strand of pasta, could use a stronger taste. There were flavours of salted-egg yolk wafting through but I suppose it is still very subtle. The pepper and chilli also easily masks the salted egg flavour.

I could feel and taste the occasional grainy salted egg yolk but its flavour could definitely be kicked up a notch; it could be richer and silkier in taste and texture respectively. A more promising salted egg yolk dish than the pasta for sure but also needs some refinement.

Cute enough, The burger buns here are bought from the bread shop just next door (kudos to working with the local community). The buns are a lovely fluffy foundations to the burger.

The chicken patty is generously huge and juicy, seasoned with quite a load of pepper. The salted egg yolk sauce is exactly the same as the one used for the pasta. Again, though initially the taste of salted egg is detectable, it slowly fades amongst the chicken, mayonnaise and even the vegetables.

I still think it can be a promising dish. The salted egg yolk pairs nicely with juicy chicken thigh meat and soft buttery buns.

The fries are also fantastic actually. Not oily yet the surface area maintains major crispness – the paprika, salt,  pepper seasoning was also on point. I was really addicted to the fries. The next burger on the list is their signature slow-cooked pulled pork burger.

Strips of pork are slow cooked in barbecue sauce, apple cider and vinegar for five long hours to achieve that thick, intoxicatingly rich savoury aroma. The strings of pork were absolutely tender and satisfying to chew on.

While the richness of the sauce is definitely a good thing, it is a tad to overwhelming for me because it felt like I was drinking barbecue sauce. Probably my favourite dish of at The Workbench, the Honey Garlic Wings is simple but lip-smackingly delicious.

Chicken wings are fried till a warm brown and tossed in a garlicky concoction of well garlic, paprika, salt and pepper. For the finishing touch, they drizzled some honey over for sweetness.

The chicken wings were crisp outside and juicy on the inside with a prevalent garlic fragrance. The strength of the garlic might completely mask the honey so they might want to add a bit more honey. Other than that, the wings were addictive. It’d be great to snack on this with beer, especially one of their craft beers. For a random neighbourhood place, The Workbench has a pretty okay amount of craft beer with 9 bottles, consisting of a variety of ginger beer, IPA, cider and golden ale. 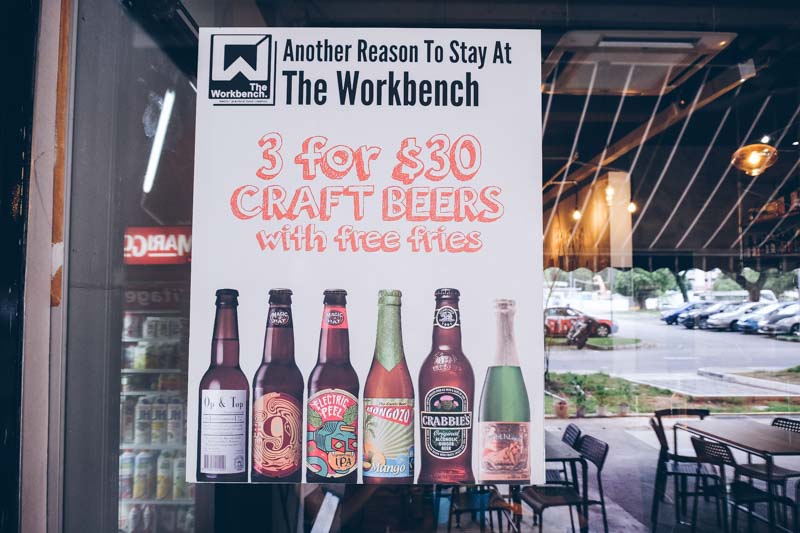 Currently, they have a pretty good promotion going on – 3 bottles for $30 with a side of free fries. I’d take up on this promo because as I’ve said, their fries are pretty good! S’mores baked in waffles?! I know that sounds so sinful, but its oh-so-goooood.

Here at The Workbench, they serve Blue and Red Velvet s’moreffles – probably the only one in Singapore currently.

The waffles were  slightly crisp outside with a dense bread-like texture as a whole. Stuck between two quarters of waffles are melted pillowy marshmallows. Thankfully, The Workbench does not use very sweet marshmallows or it would be a little overbearing.

To accurately recreate the whole smores feel, there are even crumbs of graham crackers found within the waffle like nuggets of gold! The graham crackers add a good contrast to the texture and taste.

With two giant scoops of icecream and a generous drizzling of chocolate, I’d say this dessert is well worth the money.

The mains at The Workbench are average at best so I wouldn’t come down specially for them, but the smoreffles and honey garlic wings are pretty promising tidbits.

In view of the craft beer promo, I would order some wings to hang out with a couple of friends or so. To compete in the aggressive cafe scene in Singapore, some refinement will be needed for the dishes.