The love story behind Wow Wow West in ABC Brickworks Market & Food Centre has been warming the hearts of many Singaporeans. Though their story is indeed moving, my foodie senses were onto something else. Is their food as good as their story? 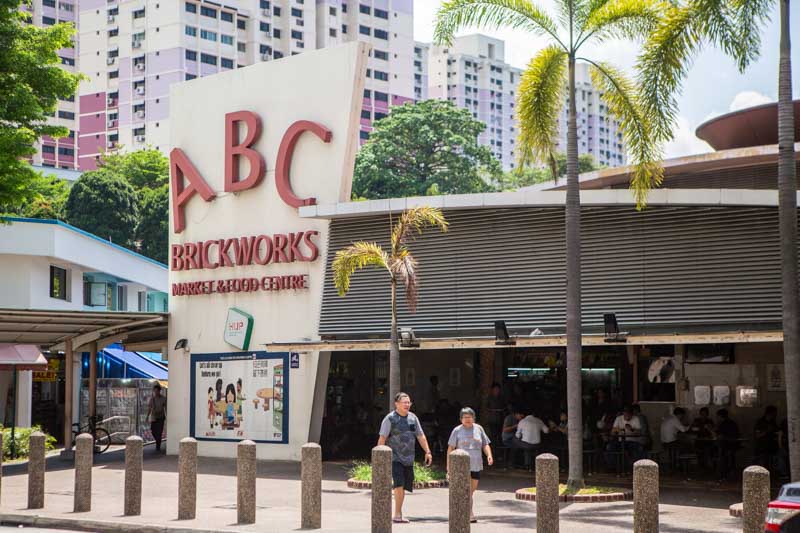 To find out, I headed over to the stall to try out the food. 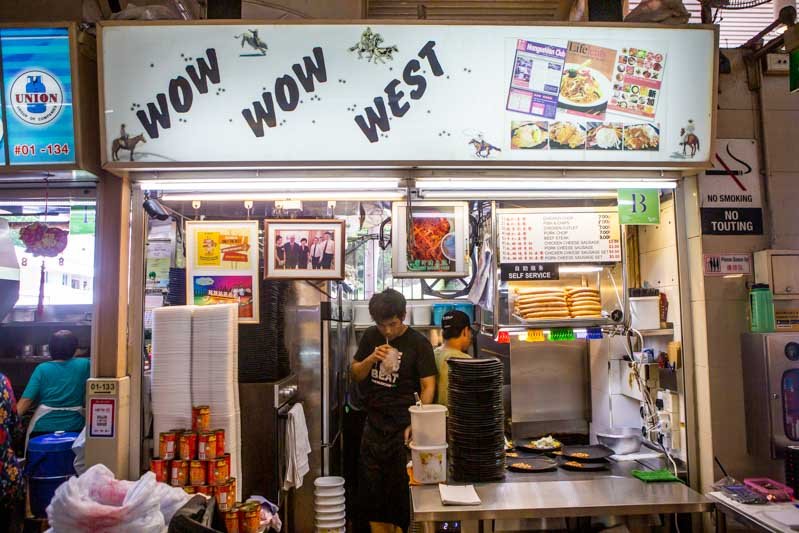 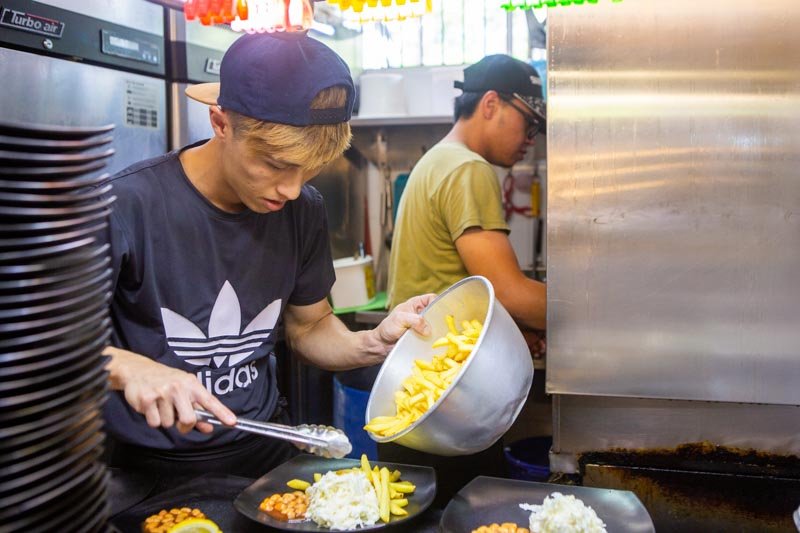 To keep the long story short, Jayden, the current co-owner, used to be a regular customer of the stall. It was in 2012 when he and Elizabeth, then the owner, got married. Since then, they’ve been running the stall together for the last seven years. 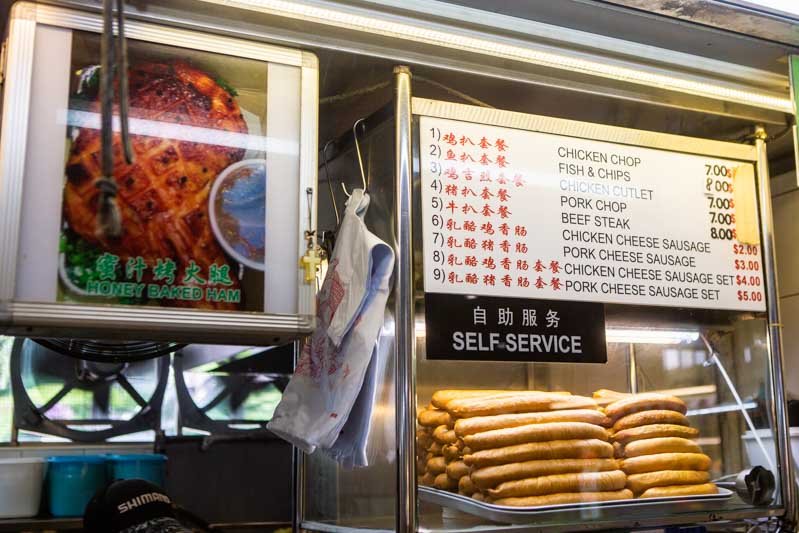 I realised that, in comparison to other typical Western hawker stalls, Wow Wow West has a much simpler menu. They only serve up a range of eight items.

That said, they’re constantly very busy, especially during lunch and dinner times. Fortunately for us, we made our visit just before lunchtime and managed to avoid the swarm of nearby office workers. 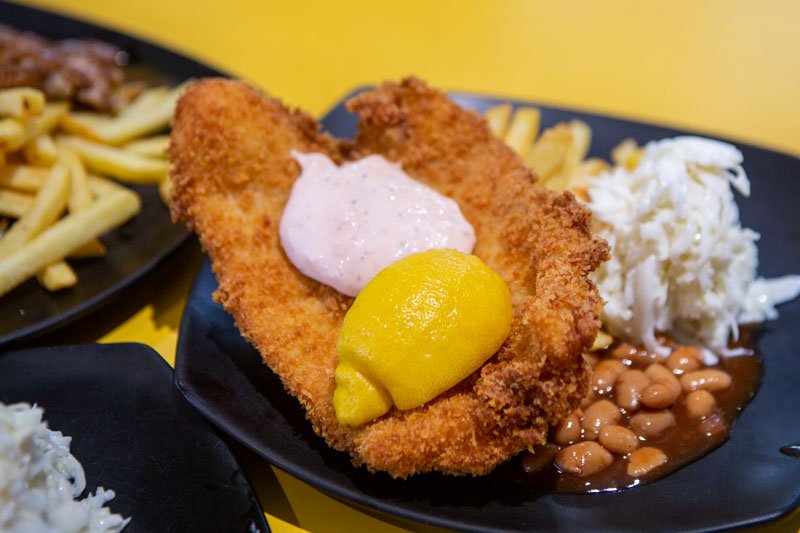 Jayden, who’s also one of the cooks, recommended us their most popular dishes. We started off with their Fish & Chips 鱼扒套餐 (S$8).

What came was a surprisingly huge fillet of deep-fried fish. The fact that they serve it straight from the fryer meant it was still sizzling-hot when we got it. 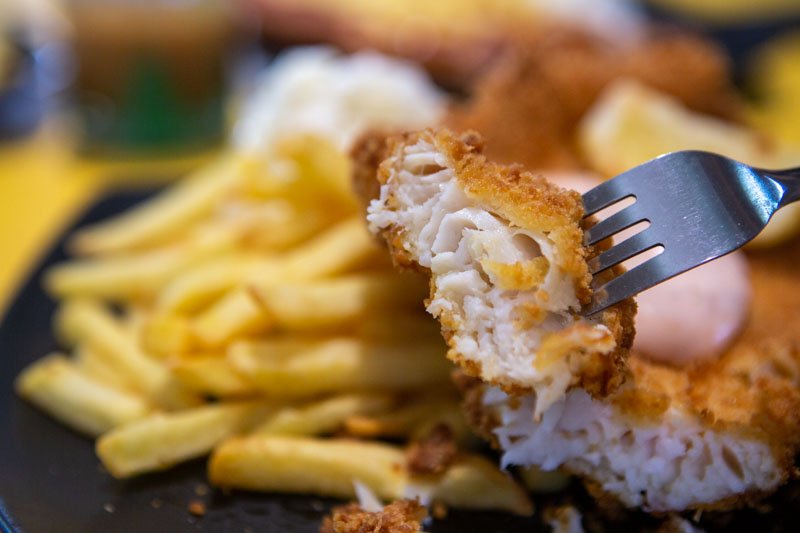 The fish had a batter that was remarkably crispy. The crackling sound of the knife slicing through it was simply music to our ears.

But the surprises didn’t just stop there. Upon cutting into the fillet, the glistening fish flakes were a sight to behold. Our mouths were already watering even though we haven’t tasted it.

As expected, the fish turned out to be scrumptious. Its moist and flaky flesh contrasted the crispy batter really well. They’ve paired this delicious fish with a generous dollop of their housemade mayonnaise sauce. 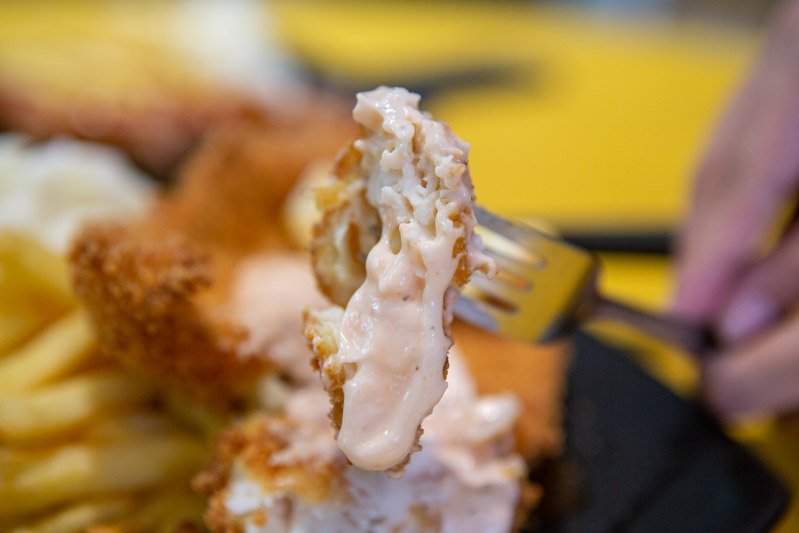 The luscious sauce had an unusual pink hue which intrigued us. The tangy and decadent notes reminded us of a tomato sauce, only thicker and creamier, which went very well with the freshness of the fish. 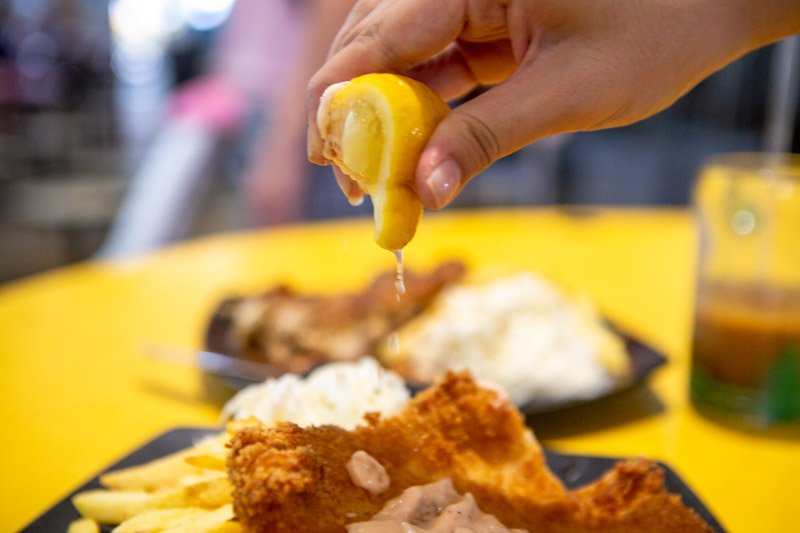 They also provide a slice of lemon to further ramp up the flavour profile of the dish. Its intense acidity definitely made a significant difference, I’ll tell you that. As a result, every bite contained a range of flavours, all complementing each another. 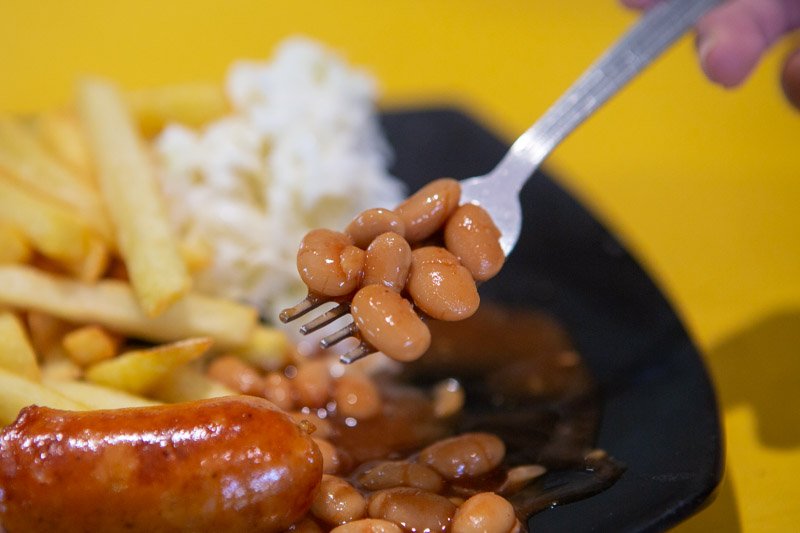 Every dish also came with three sides. While their out-of-the-can baked beans were nothing to rave about, they added some nostalgia that you’ll only get from Western hawker food in Singapore. 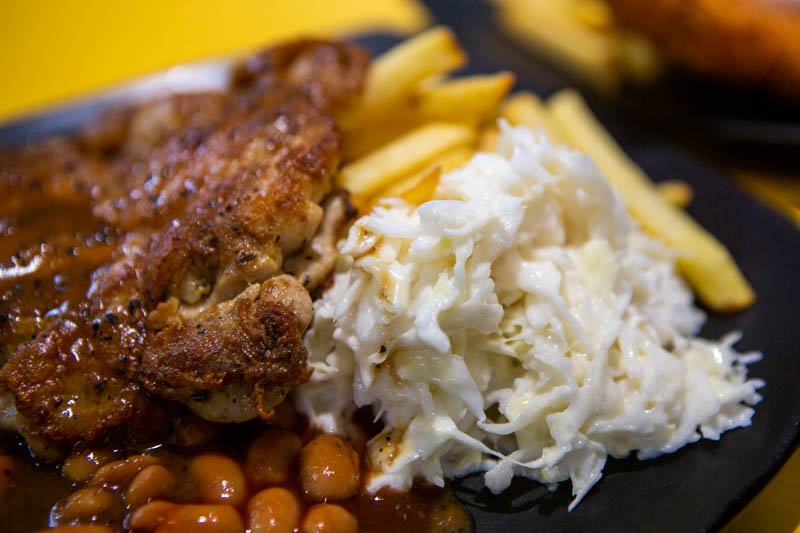 While the fries were also ordinary, the pile of coleslaw managed to impress us. The crunchiness of the cabbage convinced us of the freshness. 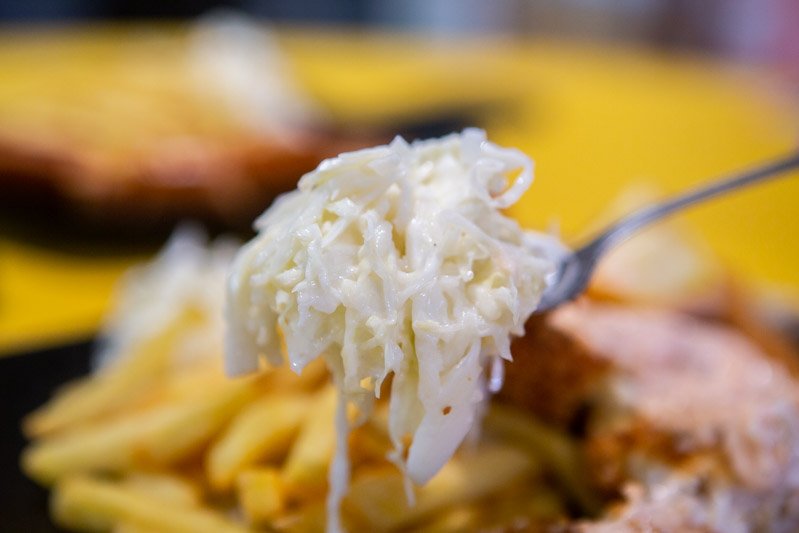 The mayonnaise even had a perfect consistency, neither too watery nor thick. Its balanced flavours made it very palatable and not jelak at all too. 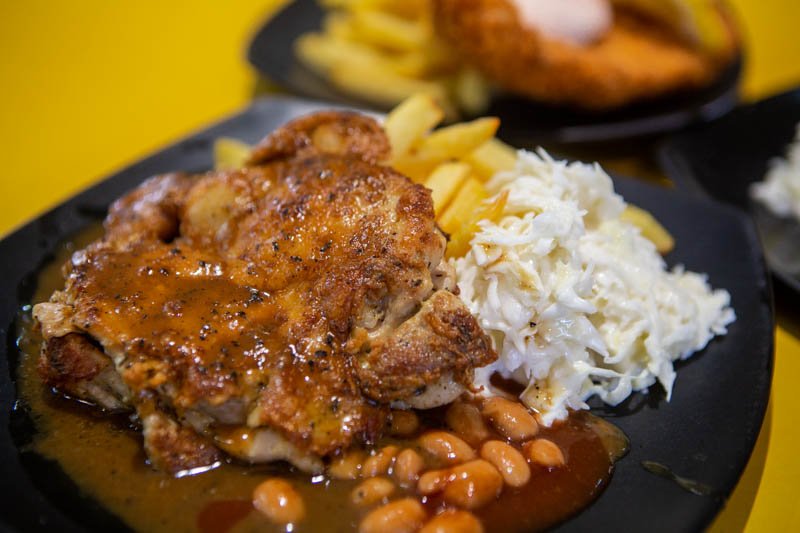 The golden-brown hue and the crispy skin of the grilled chicken looked very promising. Wow Wow West even slathers it with a coat of housemade black pepper sauce.

Having heard plenty of good reviews for this dish in particular, my expectations were sky-high. 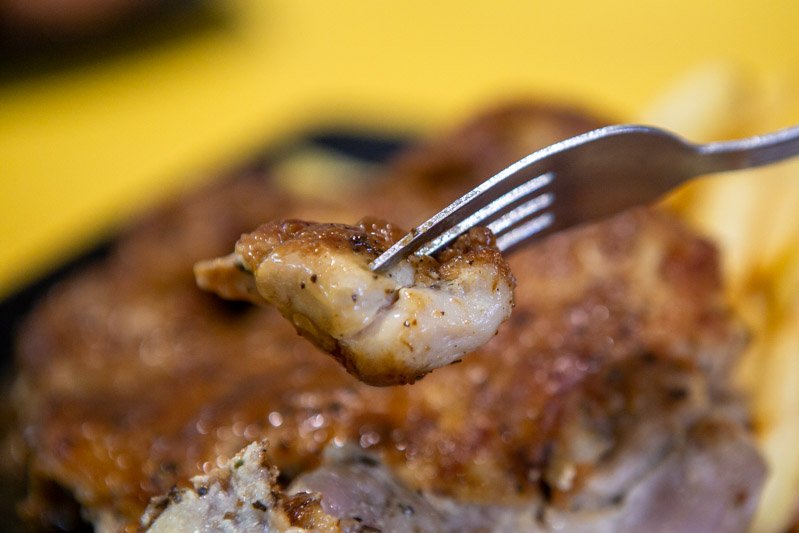 However, the chicken chop fell short of our expectations. Even though the chicken skin was crispy and juicy, the meat itself was lacking in flavour.

It was also slightly tough, which made it unpleasantly chewy. We felt it was a huge miss, and certainly looked better than it tasted, unfortunately. But given how immensely popular this dish usually is, we could only conclude that we perhaps were unlucky that day. Hopefully, it’ll turn out better the next time we’re there!

To end off our meal, we had the Pork Cheese Sausage Set 乳酪猪香肠套餐 (S$5).

I noticed that many customers were ordering the sausage a la carte (S$3) as an add-on item. It turns out that their sausages are indeed very popular as add-ons, according to Jayden. Although the sausage didn’t ooze with cheese as we were cutting into it, it was still undeniably succulent and juicy. It had a smoky char and a perfectly chewy texture which made it very enjoyable. 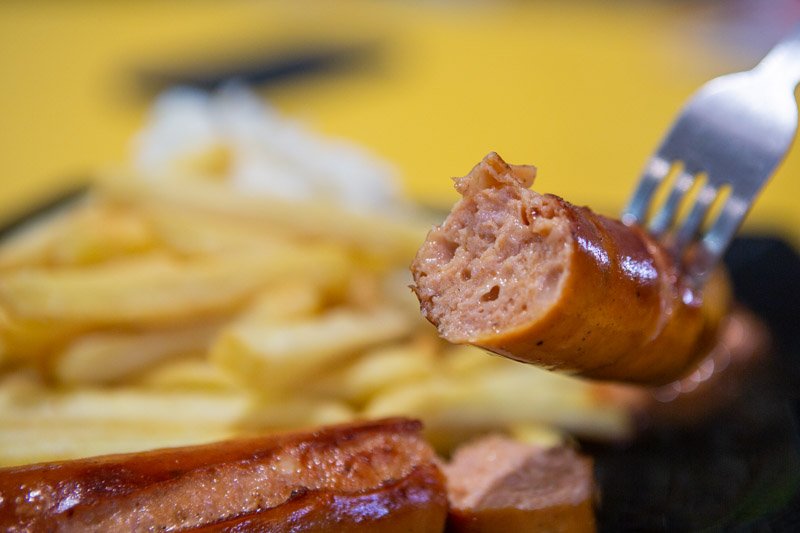 That said, the abundant creamy cheese in the sausage only became prominent as we chewed on it.

Some might find it a little salty, but since I like my flavours strong, I found myself thoroughly enjoying it. Furthermore, for only S$5 for a complete set, I don’t think there’s a better deal anywhere else! The price range of the food here at Wow Wow West is undeniably affordable. Although they have a comparably small kitchen, their ability to dish out scrumptious food with such quality is impressive.

I can definitely see myself returning to Wow Wow West again, especially for their delicious Fish & Chips. It’s simply a bonus that they’re so generous with their portions. Not only that, they’re also just a stone’s throw away from my favourite ang ku kueh place!