Living in Toa Payoh myself, it wasn’t a huge surprise to see Xiao Cao Xiang Steamboat Buffet (小草香自助火锅) pop up near the HDB Hub as it has pretty good foot traffic.

They aren’t exactly huge on social media, as I searched and nothing much popped up. Hence, I decided to give it a go and drop by on a weekday afternoon. Checking out the price point, I could see why they were pretty popular to the nearby working crowd during meal times. At S$16.80+ for weekday lunches and S$18.80+ for weekday dinners and weekends, this was pretty affordable. Children can enjoy the buffet at S$10.80+ as well. This is especially so for an all-in buffet with a decent 90 minute time limit and in the comfort of an aircon environment. The place itself was simply decorated, with wooden furniture and white porcelain cutlery. I liked the little touches of paintings and art pieces on the wall, which gave it a bright and inviting vibe.

As we got to our seats, our single pot soups were served almost immediately. Payment is made before you enjoy your buffet, where you can choose your soup base. There were a whopping seven different soup bases! Under the recommendation of the friendly lady at the counter, I went for the Tomato Soup Base, one of their more popular choices.

It leaned towards the sweeter side but was extremely flavourful. The soup still had a decent balance between sweet and tangy, with tomato chunks. 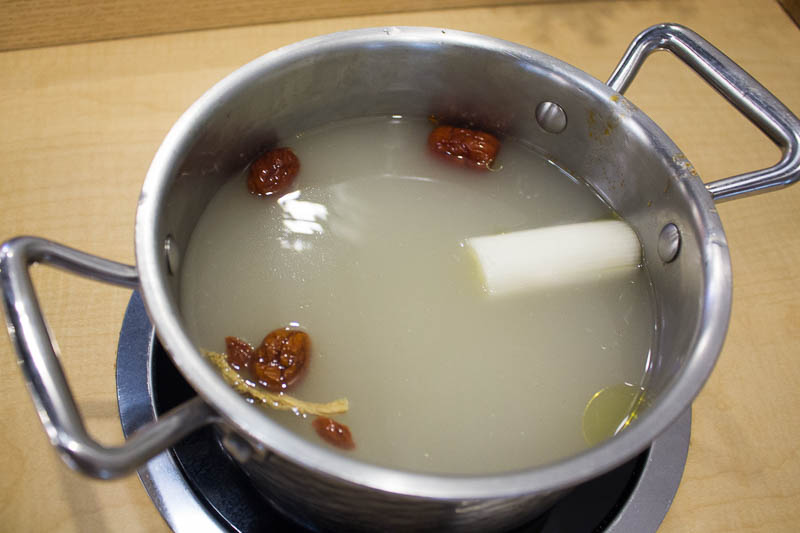 My dining partner went with the Herbal Soup Base, which was another hit with its customers. I tried it out, and I liked how it had a distinct spice to it. It was still mild and soothing overall, perfect for those who prefer something lighter on the palate.

For one or two pax, they will serve your soup base in individual pots. This makes it easy for single diners who crave hot pot. However, for three pax and above, you have the choice of the bigger sharing pots. 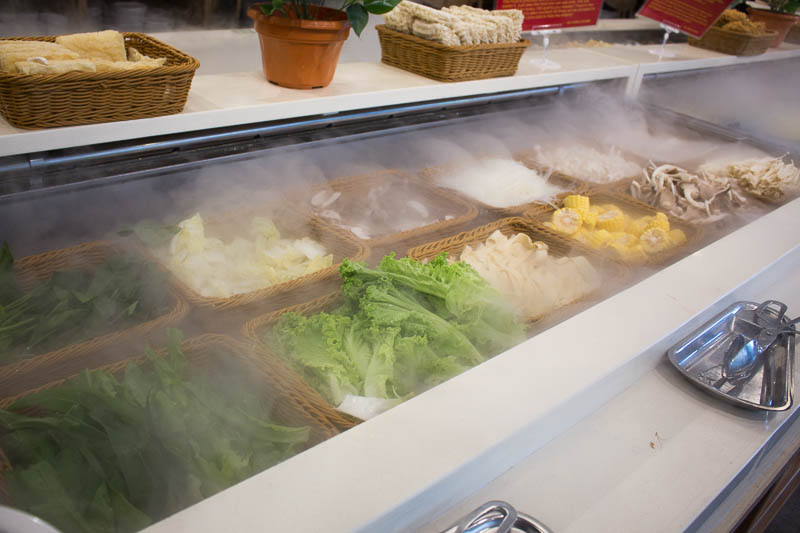 I must say, I was pretty impressed by the variety of food they had. In terms of leafy vegetables, they were 12 different kinds. All of them looked fresh and crisp, placed in wooden baskets which I thought was a nice touch. 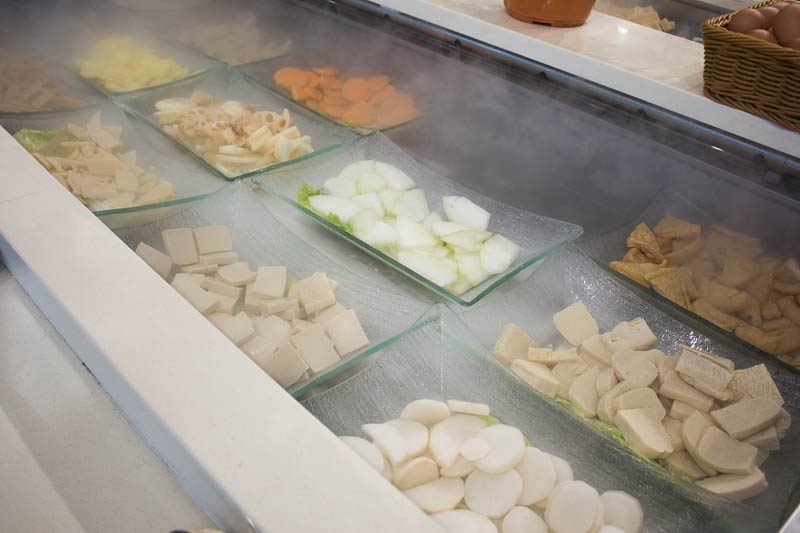 Beside the row of leafy greens, there were also other veggie related offerings like lotus root, potato slices, tofu, tau kwa and several more. Of course, I could not miss out on the meat selection. There was actually a pretty decent selection of seafood including mussels, clams, prawns and sotong. They also had a bunch of other cooked food items such as sausages, luncheon meat and different kinds of meatballs. 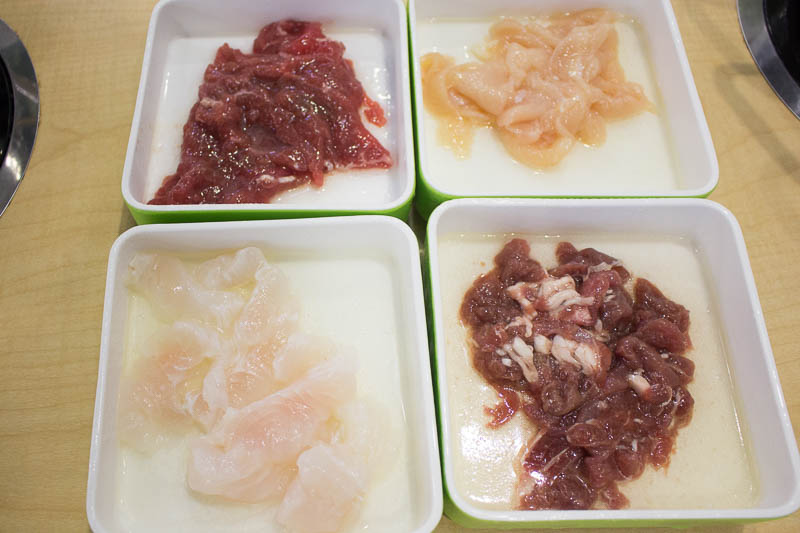 Just next to the seafood and cooked food selection were the raw meats. I took the individual serving plates out for a better view.

I liked how all their meats were placed in individual serving sizes. This not only helped to portion control better for less wastage, and it was also more hygienic as well. The offerings included beef, chicken, fish and lamb.

I have to point out that the cuts of meat were actually pretty good for its price point. They were not too fatty and tasted fresh. Just when I thought that was all the meat they had, there was another chiller with an array of shabu-shabu style meats. I have to give a spoiler right now and say this was my favourite part of the buffet. If you love carbs like I do, not to worry. They offer steamed rice as well as fried mantous! I have to admit they were not the best, but decent enough. 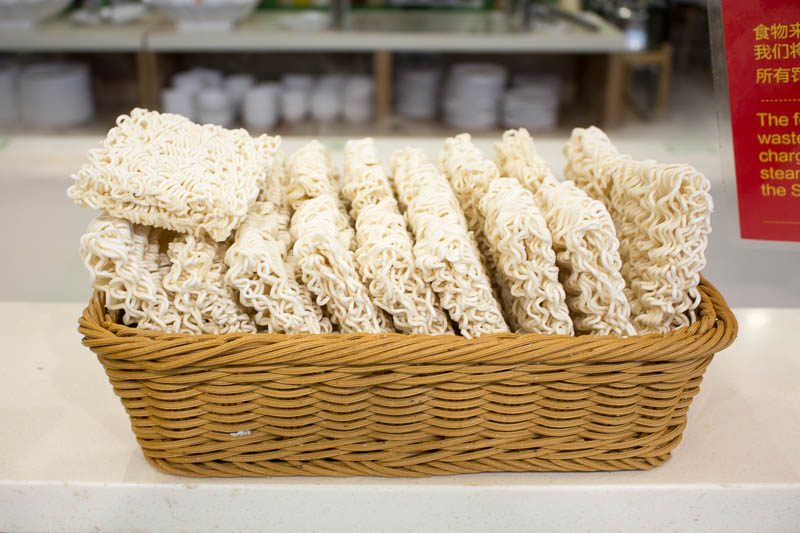 They were also noodle options placed on the centre row aisle if rice and bread are not your thing. There are also eggs for those who wish to get in more protein or add a creamier touch to your broth. 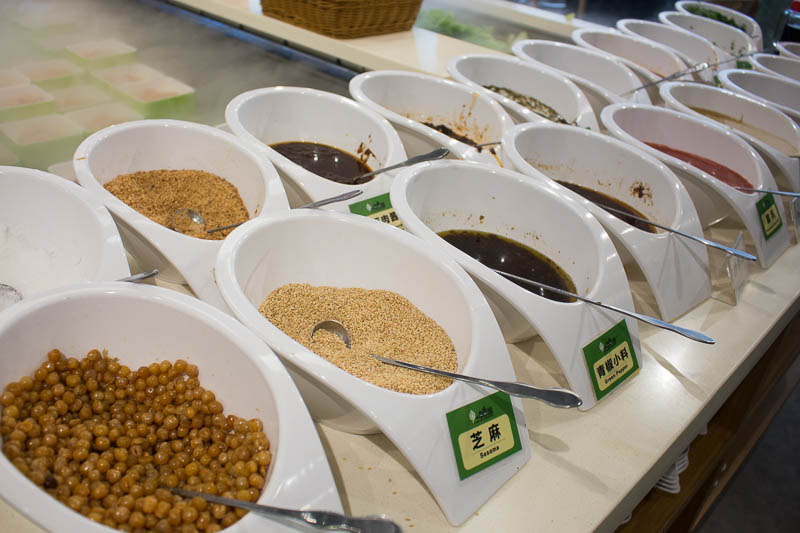 For those who love your sauces, you will be glad to know that they do have a DIY Sauce bar. It was nice to know that I wasn’t going to be charged extra, whether I used the sauces or not. 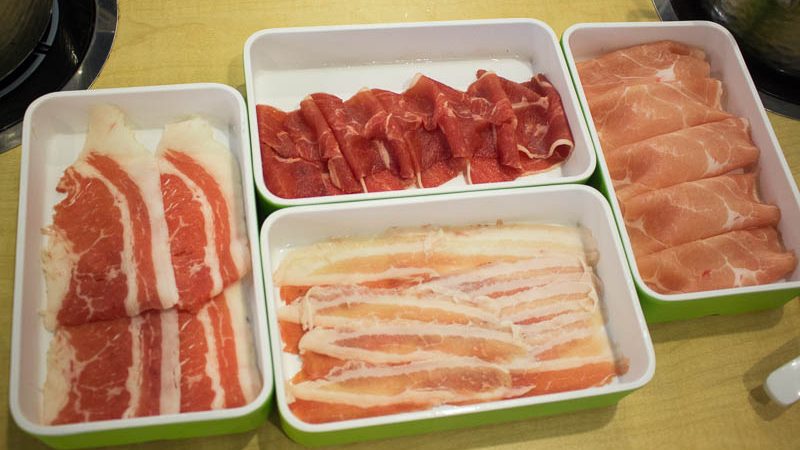 The shabu-shabu style meats were the ones that mattered the most since people were most likely going to have multiple servings of them. The meat quality was great: chilled well, fresh and dry with no smell to them. I tried them all, and indeed they were pretty good. However, my favourites were the sliced beef belly and sliced pork shoulder.

I liked how the fats were buttery soft and had that melt-in-the-mouth texture, whilst the lean parts had its distinct meatiness. However, it was less chewy which made it very easy to eat. 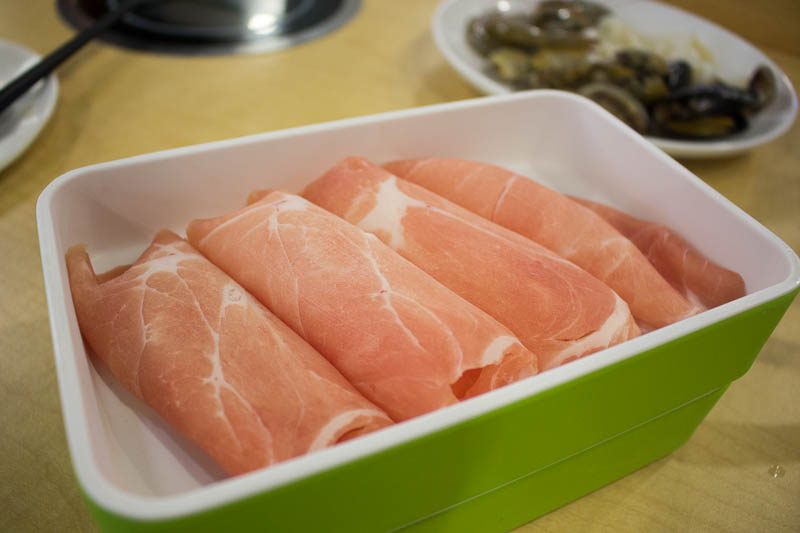 The latter was more of lean meat, which helped to cut through the fattiness of the other meats. Nonetheless, it was still tender and juicy. While the pork was mild in flavour on its own, I liked how the distinct tomato soup actually added notes of sweetness to the meat. 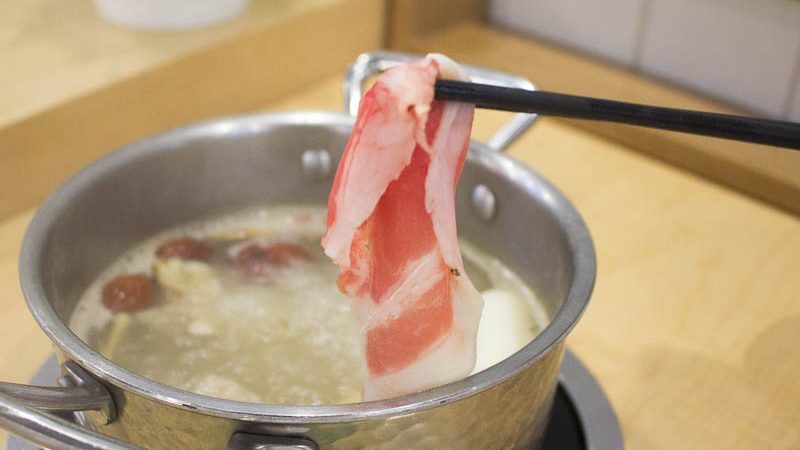 The sliced pork belly was softer and more tender as compared to the sliced beef belly. I liked how thin they made them, so it cooked really quickly. Dip them in the soup for a few seconds and voila, they were cooked. I’m not the biggest fan of seafood in buffets as sometimes they can get very briny. Nonetheless, I decided to get a little bit of each to try them out. 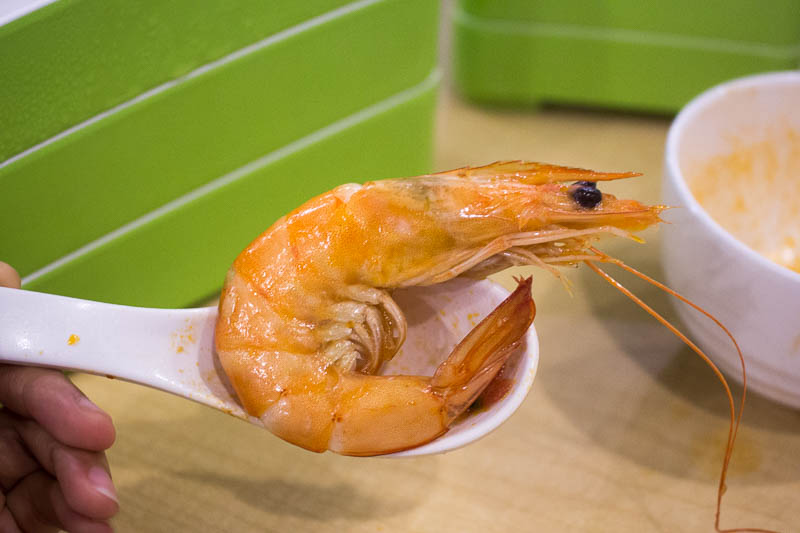 I have to admit, the shellfishes and sotongs were not the best. They indeed tasted slightly fishy which did not really sit well with me.

However, their prawns were the saving grace. They were firm, with just a hint of sweetness. For those who love Xiao Long Baos, you would be pleased to know that they serve them here as well. Placed in a steamer, you can grab as many as you fancy (with moderation)! 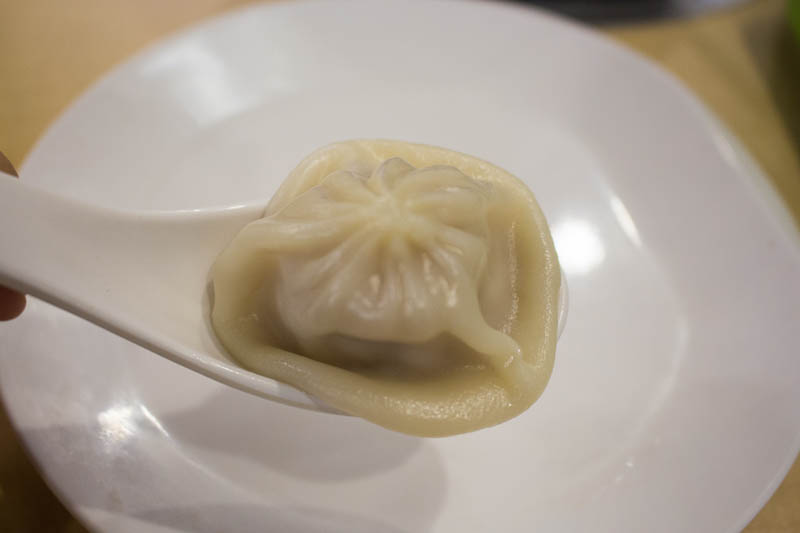 I did not have high expectations for this as it was not a speciality store. However, I must say I was really impressed. As I picked it up, I could feel the heftiness of the soup within and the skin was relatively translucent. The hot pot buffet experience I’ve had at Xiao Cao Xiang Steamboat Buffet (小草香自助火锅) was indeed a good one. Not only did they have a humongous variety of food at its affordable price, but the quality was also actually very decent too.

With its comfortable environment, I’m sure they would be a hit. In addition to that, they also serve drinks and fruits, which is all included in the buffet price. Honestly, this is one of the most worth it buffets I’ve had. 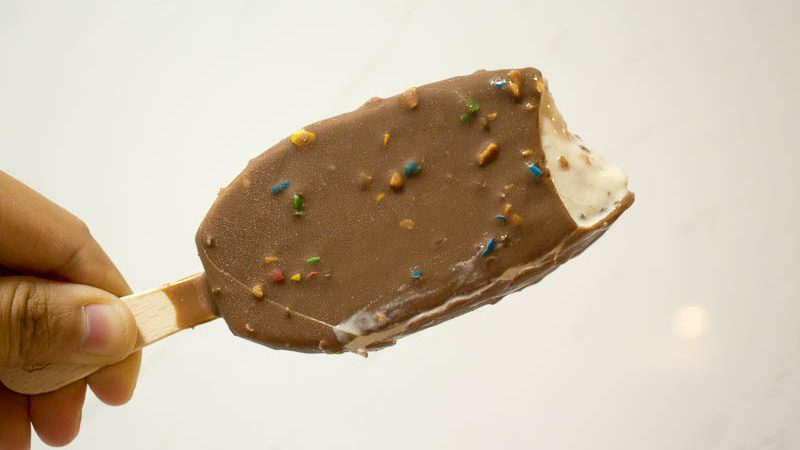