A fairly new outlet located in the west, 1_345 Secrets of Thai Taste mookata is located in a large food court at The Elitist building near many other industrial offices. By night, most of the other stalls stop operating while conversely, 1_345 only starts up in the evening and can utilize many of the tables available. The table area is huge and spacious unlike the usual cramped mookata restaurants. There is ample free parking at The Elitist and although a bit ulu at Bukit Batok Crescent, quite convenient to drive to if you have a car. 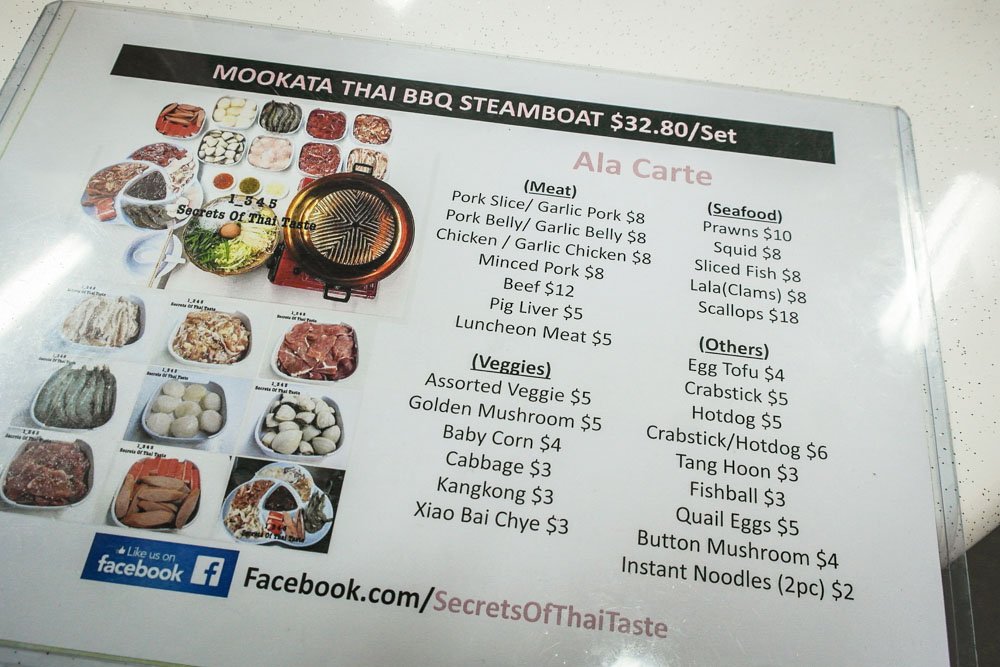 1_345 mookata has a very simple a la carte menu as well as a set order. The usual steamboat ingredients can be spotted here.

The unique point is in their Chiang Mai style Mookata non-MSG chicken soup stock, made daily by the owner’s Thai wife. Every detail from the soup to the ingredients are paid special attention to, to deliver a complete mookata experience. The gas-powered, brass skillet grill that 1_345 uses has no gaps between the grill lines, and allows all the fats and flavours from the grilled meat to flow down into the soup moat surrounding it. 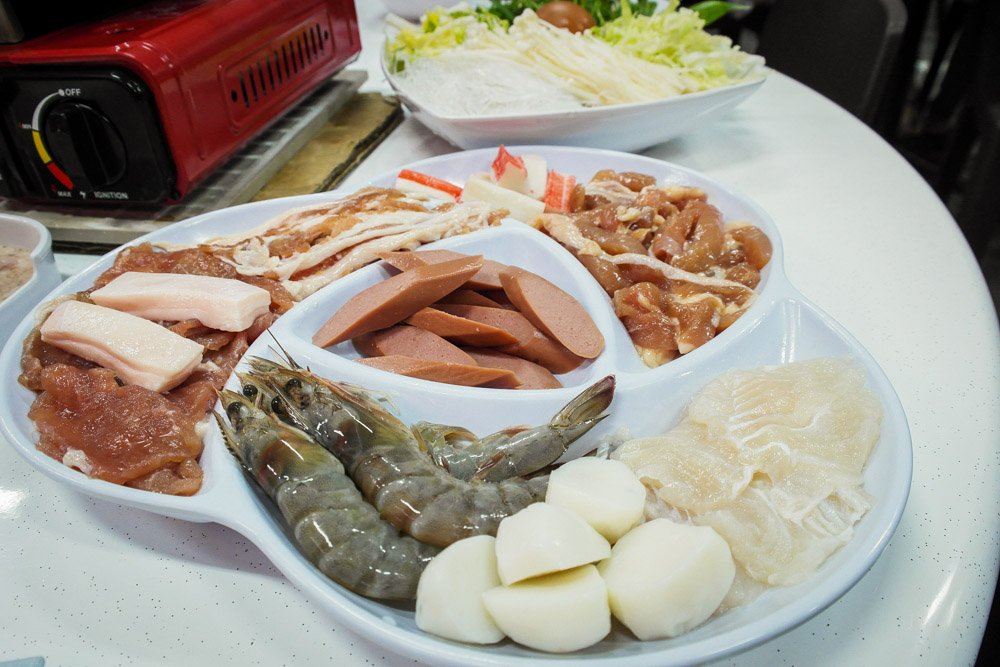 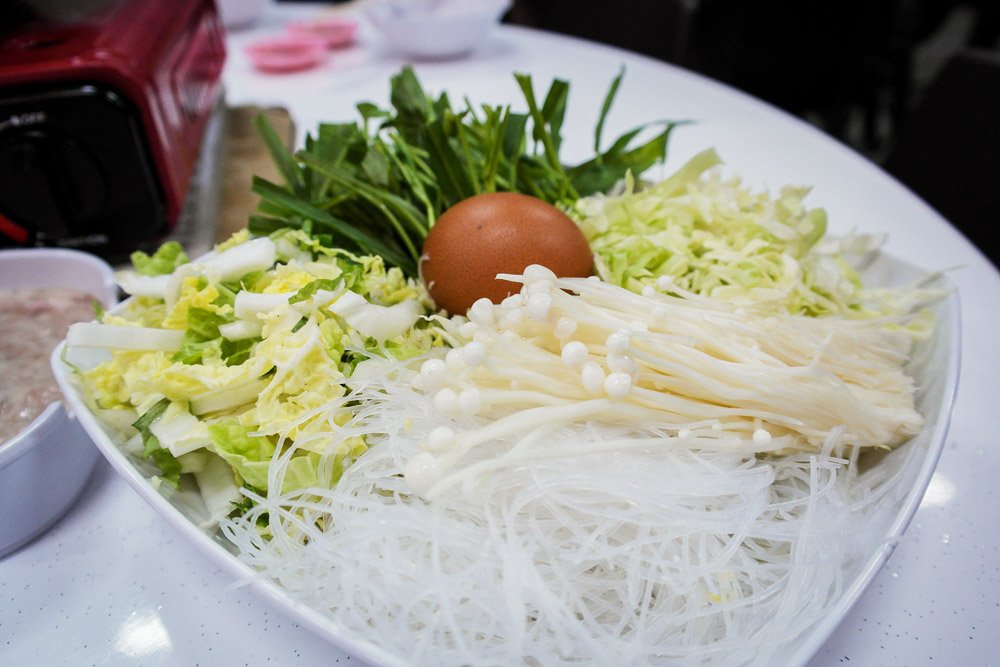 The set is actually really affordable when split among guests, and very straightforward albeit no frills. 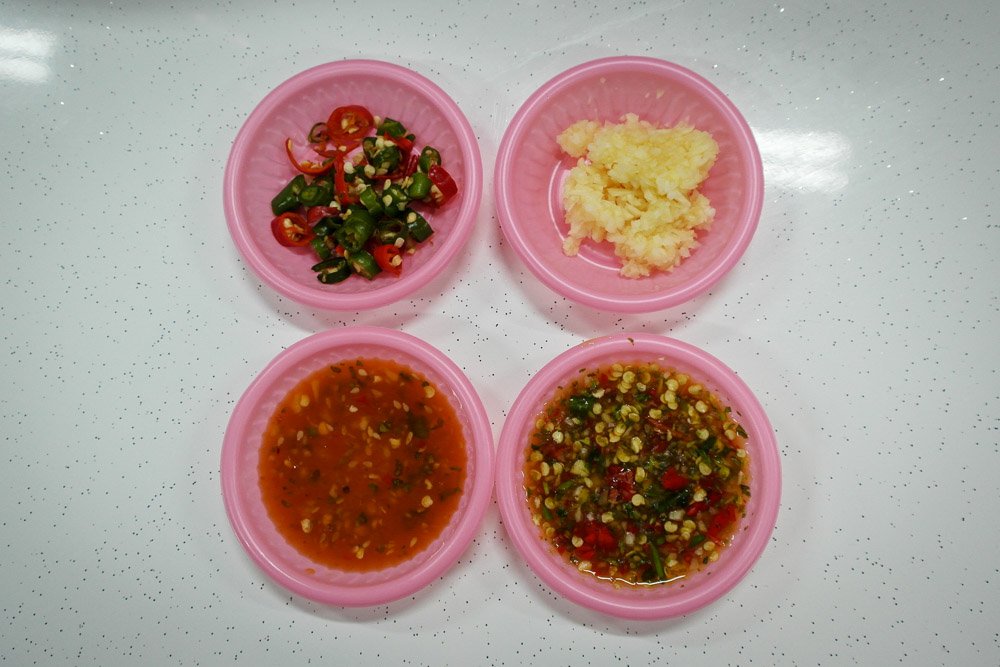 For condiments to be paired with the meats, there are chilis, garlic and the 2 homemade chili sauces: Thai Suki sauce and a seafood sauce. The sweet suki sauce has visibly less chili seeds as compared to the seafood sauce which has a much spicier kick which I prefer. 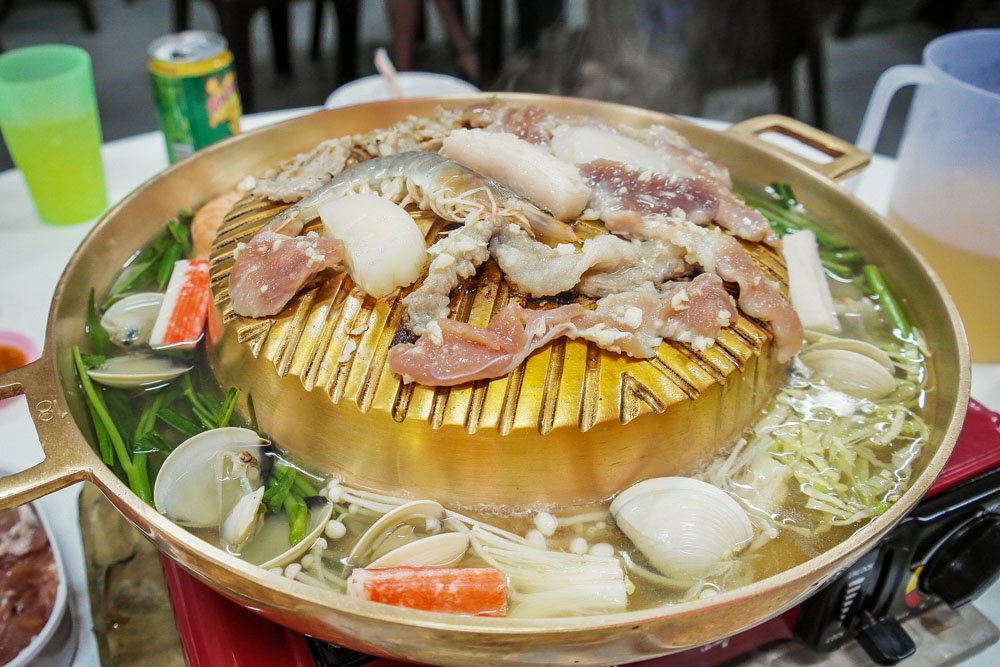 Their skillet soup bowl is also deeper than other mookatas I have been to, which allows more soup to be held at a time rather than constantly refilling. 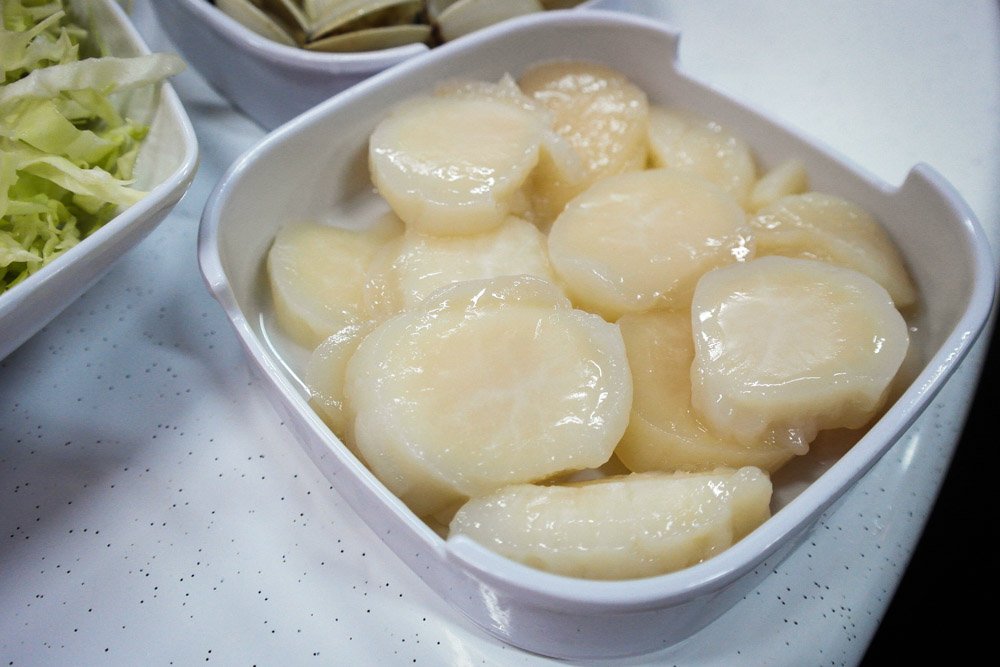 Scallops ($18). Some other a la carte items we tried included more premium stuff like the scallops, but might take a while to prepare as it needs to be defrosted. 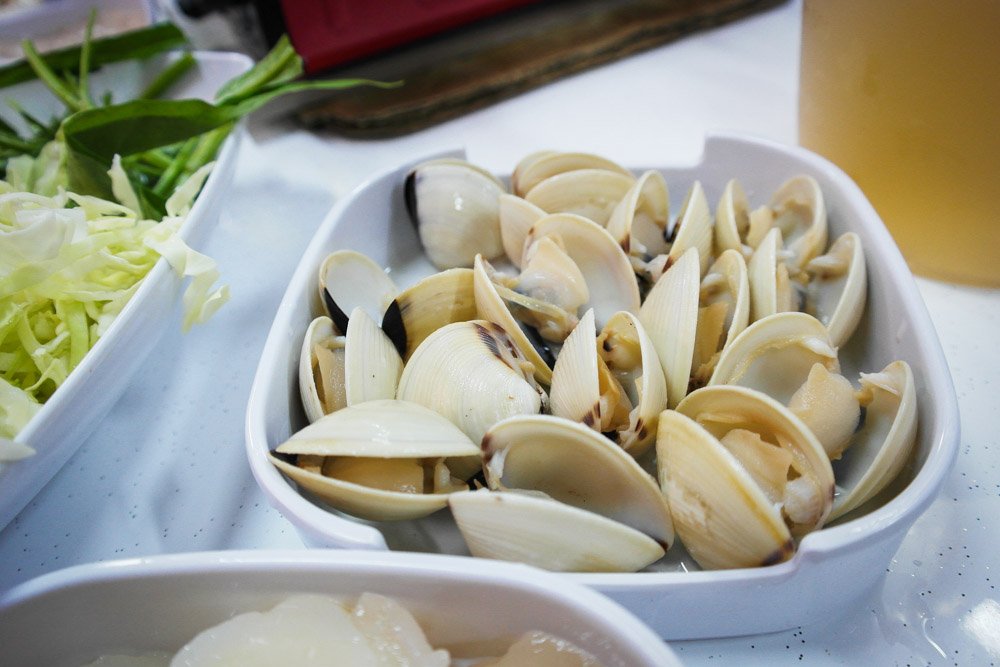 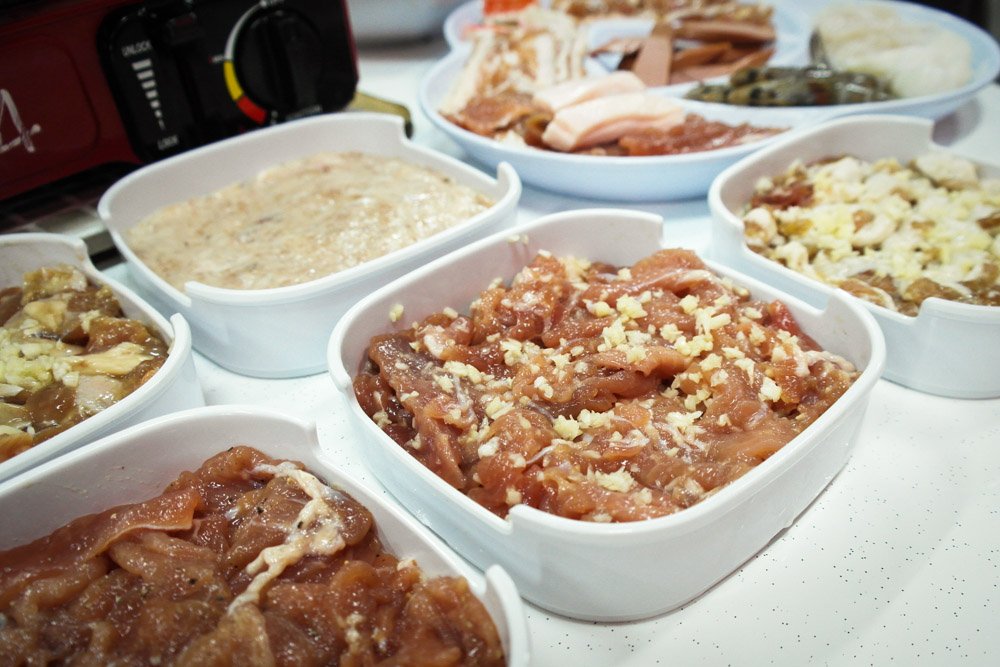 Garlic/Black Pepper Chicken ($8). Although not officially on the menu, the restaurant also serves a black pepper marinated chicken with very robust black pepper flavours. Definitely a secret order to try. 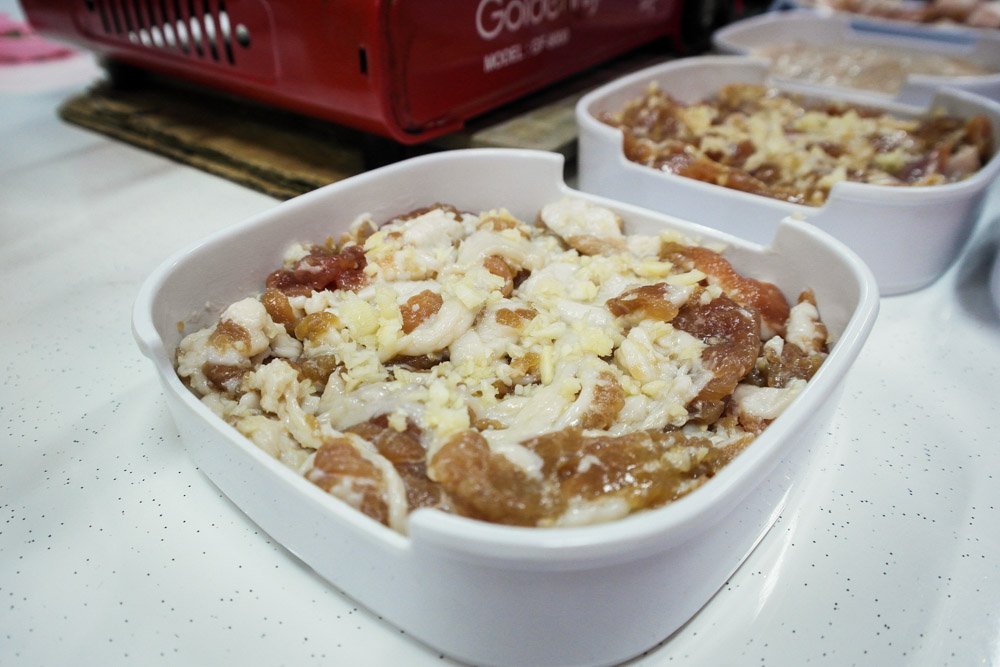 Garlic Pork Belly ($8). If you enjoy fatty soft meats, this is for you. The garlic serves to add additional dimension to the pork. 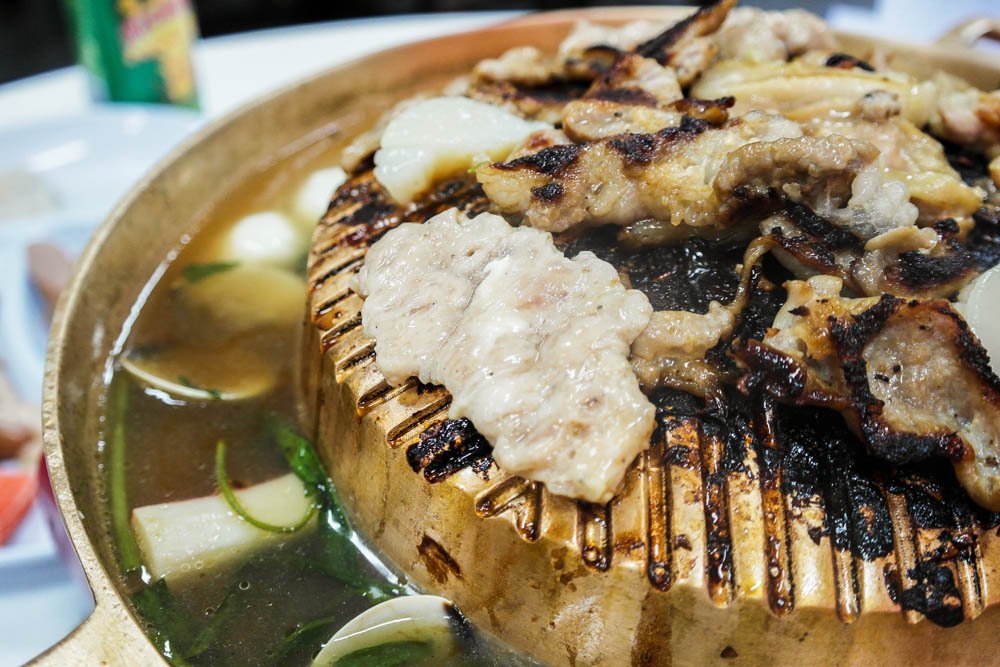 Minced Pork ($8). Something a bit more unique is this homemade minced pork paste. You can either mould it into a small ball and add it into the soup (like a meat ball), or spread it flat on the grill as above. I really liked the grilled method which really brings out the charred flavours better. Although variety selection is quite basic by nature, the meats are marinated simply and prove to be quite tasty. The huge open air area in the coffee shop where the restaurant is also minimizes the amount of smokiness that seeps into your hair/clothes which happens with any BBQ- it’s less cramped and you don’t get exposed to other people’s smoke.

The rich chicken broth made with a secret Chiang Mai village recipe is also one of the highlights for visiting 1_345 Secrets of Thai Taste. Ample seats and parking in The Elitist building and hidden away in the far west, this is a very underrated mookata in Singapore not many people know about.

Oh yes, if you can guess correctly why the stall is named 1_345, you stand to win 10% off your bill, so just ask the owner about this secret quiz. 8 Reasons To Visit Pangkor Laut Resort in Malaysia For Your...