It probably never occurred to us how we’re gradually seeing the disappearance of the ‘one-dollar ice cream uncle’ we so affectionately know them as. In their place are trendy, up-and-coming cafes serving up artisanal scoops atop cones and waffles, while the humble block of ice cream sandwiched between wafer or bread is forced to take a step back.

Ice cream is one indulgent pleasure that satisfies, but I always have a soft spot for old school traditional desserts. 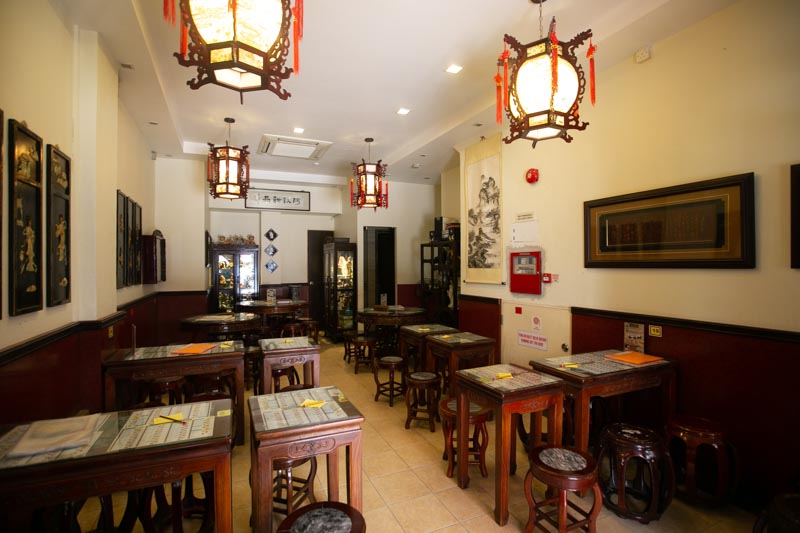 Located along the stretch of Liang Seah Street in Bugis, Ah Chew Desserts is truly quite a gem, standing out amongst the other dessert stalls along the same stretch. Growing up in a relatively traditional Teochew household, having yam paste, or as we call it, orh nee, as dessert is commonplace. It took a bit of getting used to initially, considering how most kids (myself included), only longed for cold icy desserts while orh nee at home was usually hot.

Naturally, yam paste dessert was a mandatory order. We opted for the Yam Paste with Gingko (S$3.30). While they have both hot and cold variations for some desserts, this is only served hot. Flavours like taro or sweet potato are easily well-liked by many, and it’s possibly because of their naturally sweet and earthy flavour.

Ah Chew gets their yam paste to a thick creamy consistency, with tiny bits of yam in the mix. It was not too sweet, and the gingko nuts added gave the pureed yam some texture. Traditionally, the dessert calls for shallot oil or lard to be in the mix, but most places omit that step these days because it often results in a very oily paste. 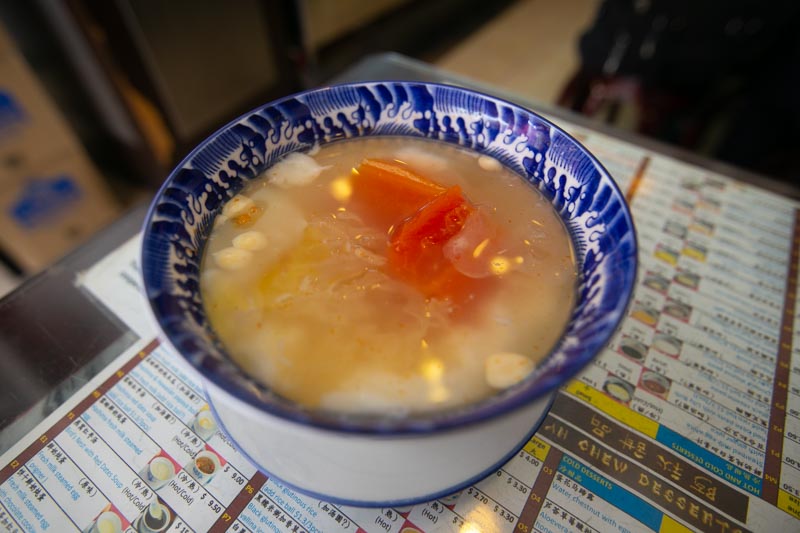 Soups can be considered an inherent part of Chinese culture, which is no surprise considering how they are the cure for every ailment or the only supplement your body needs (or so mum claims).

We went for the Rock Sugar White Fungus Papaya With Almond Paste (S$4) which was something that tasted rather homely. 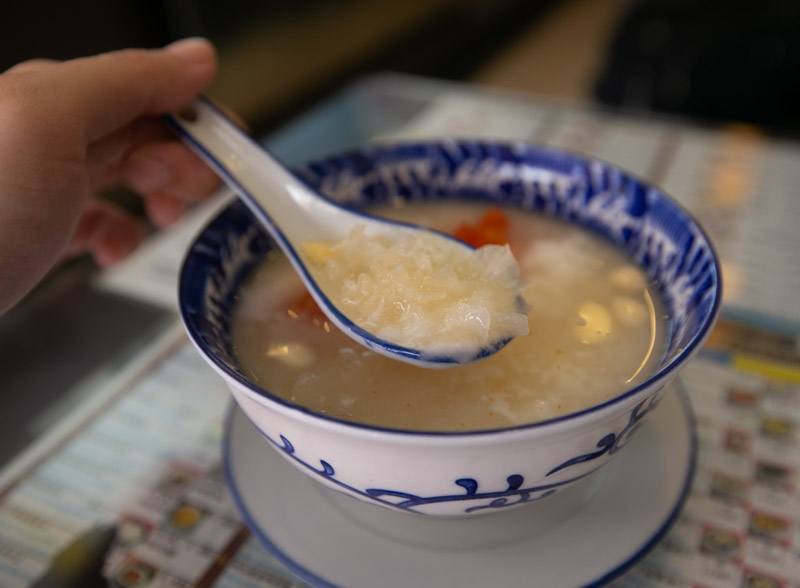 Though made with only four simple ingredients, they worked well together. Surprisingly, the rock sugar, which was the main ingredient used for the soup, wasn’t cloyingly sweet since the fragrant almond paste easily balanced out the flavours. Both white fungus and papaya are known to have much health benefits, making this dessert loaded with antioxidants and healing properties. It’s the dessert you’ll probably want to skip ice cream for.

It’s a great alternative to cheng tng if you’re looking for something a little less herbal. 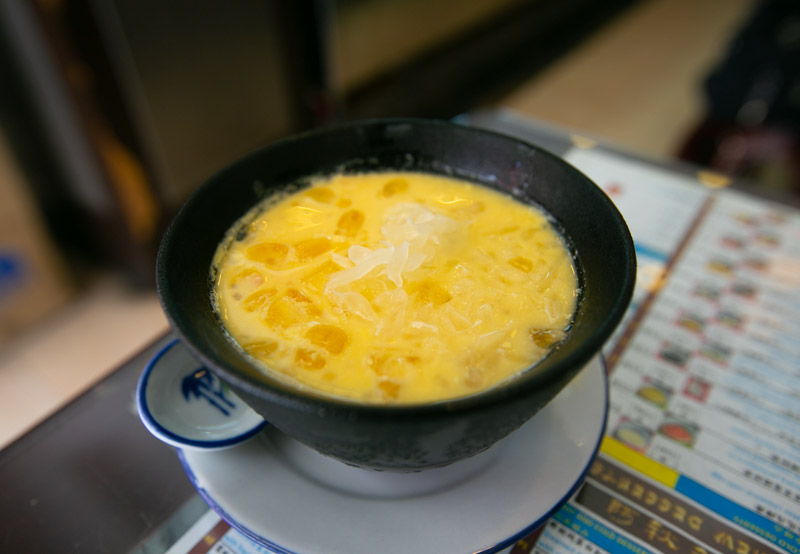 I had to order their Durian Mango Sago With Pomelo (S$5.80); almost anything durian appeals to a durian lover like myself. A relatively simple dessert that arguably requires little skill beyond putting the different ingredients together in a bowl before serving, I suppose what sets Ah Chew’s one apart is the quantity and quality of their ingredients.

Ah Chew serves theirs with a generous portion of mangoes that are chopped into large chunks, and best of all, the mangoes were actually sweet.

To balance the sweetness in the dessert, the mildly sour chunks of pomelo pulp worked in favour to complement the mangoes. 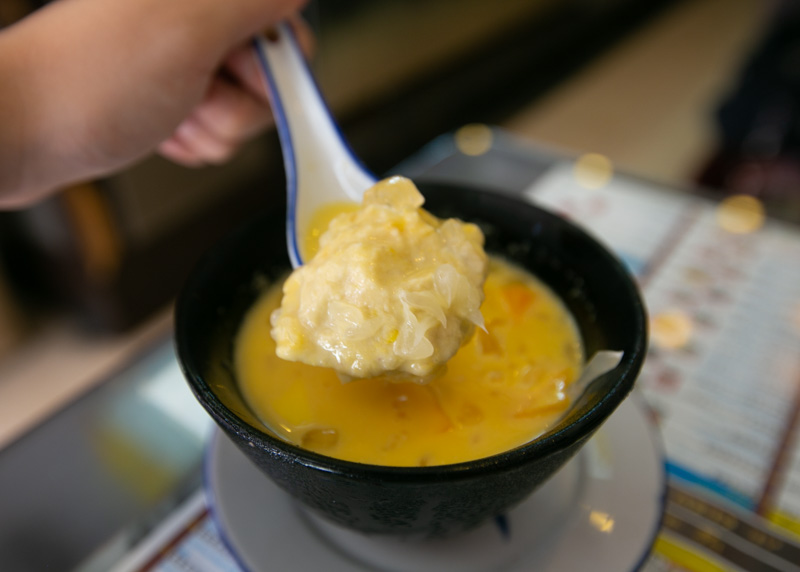 The addition of real frozen durian flesh was a real guilty pleasure, adding a bit of creaminess to the dessert. 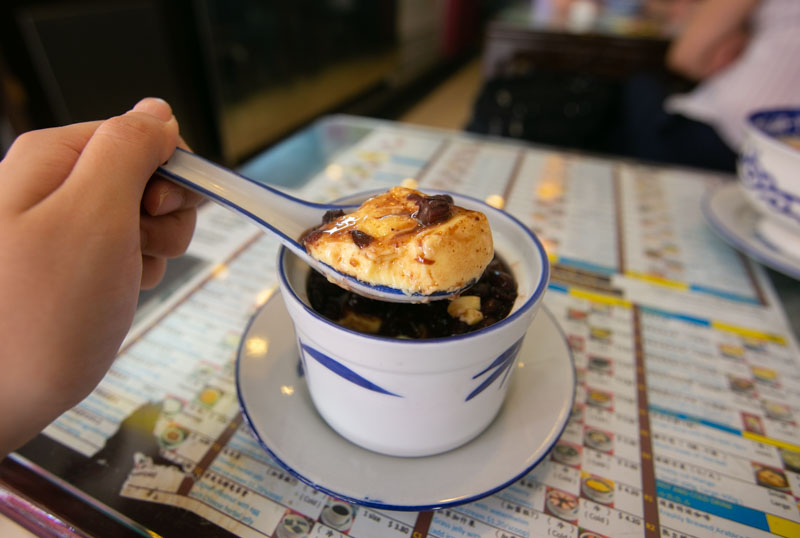 Served in a small ramekin with a lid, the steam egg was entirely covered with red bean topping. It’s much smaller than the other bowls of dessert, but I suppose too much egg would be too filling.

The delicate steamed egg inevitably reminded me of beancurd, but less firm in texture. Admittedly, though, having the red bean topping together with the steamed egg masks the eggy taste that some may not enjoy; you might even momentarily forget that the silken curd is egg and not beancurd.

Ah Chew Desserts proved to be one of those places that serve you more than mere nostalgia, with their stellar quality of ingredients sets its apart from an average dessert joint. It’s a place you’ll go back to because others just may not do your favourite traditional dessert justice.

Liang Seah Street becomes a bustling place at night when the road is cordoned off for more seating along the whole stretch of eateries, so be prepared to queue if you’re planning on heading down after dinner.