Antoinette: Indulge In Their Array Of Souffle Pancakes Like Ondeh Ondeh & Other Sweet Treats In Lavender

Pancakes have been all the hype recently, especially souffle pancakes. Light, soft, fluffy and jiggly, these are not only Instagrammable but taste as good as they look too. When I realised Antoinette had revamped their menu with delicious souffle pancakes, decadent cakes and French-inspired mains, I was all for trying them out. Yes, I was more than excited about the souffle pancakes. Those who know me would agree that I’m a lil’ obsessed with them. However, I managed to restrain myself as we went for starters first. 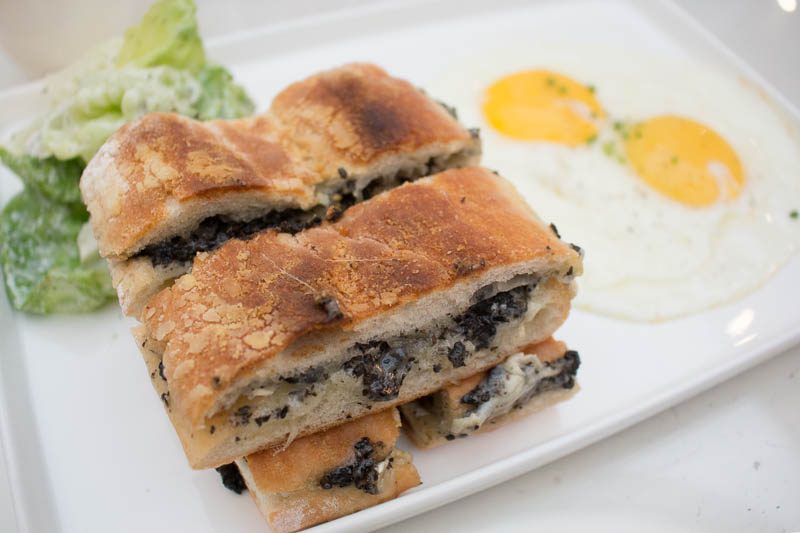 I’m sure glad I did as the Schicciata (S$18++) was extremely delicious. This was a traditional flatbread that was stuffed with camembert and pecorino cheese, as well as a generous amount of truffle. 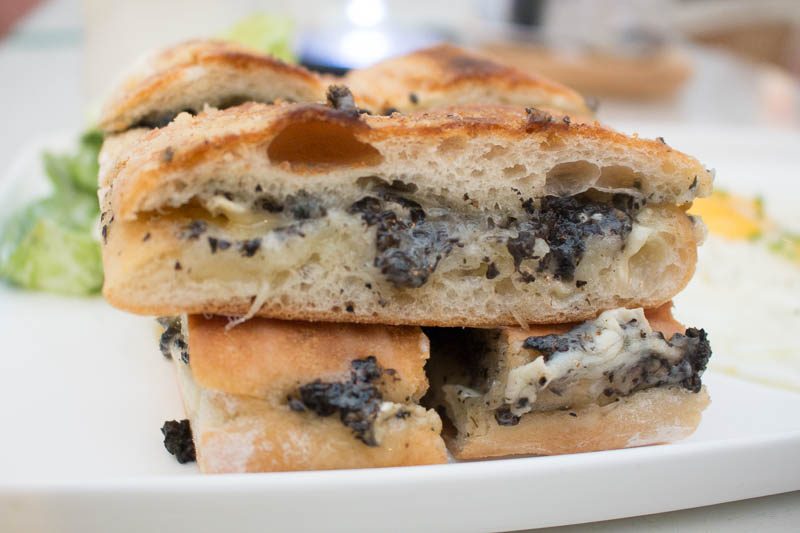 This gave an extremely fragrant and flavourful gooey filling, which complemented the chewy bread for varying texture. 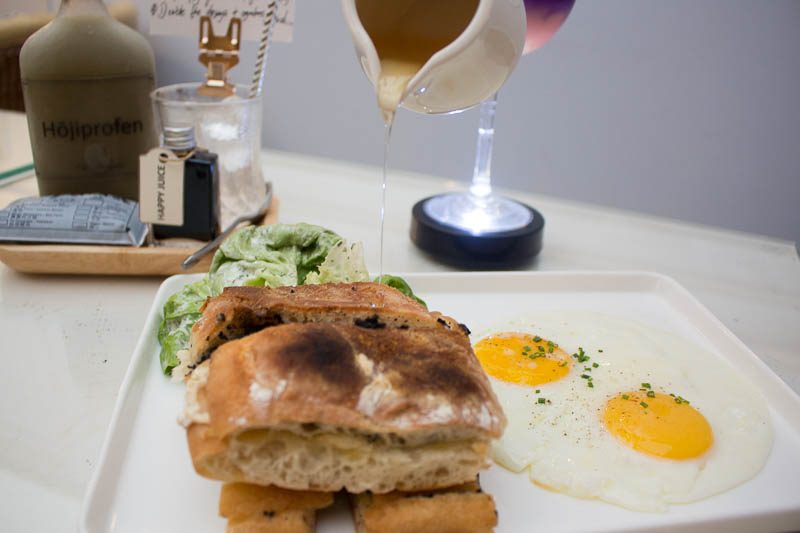 I liked how it was complemented with sunny side up eggs for a richer mouthful, and the drizzle of honey on the side gave a touch of sweetness to balance out the savoury filling. 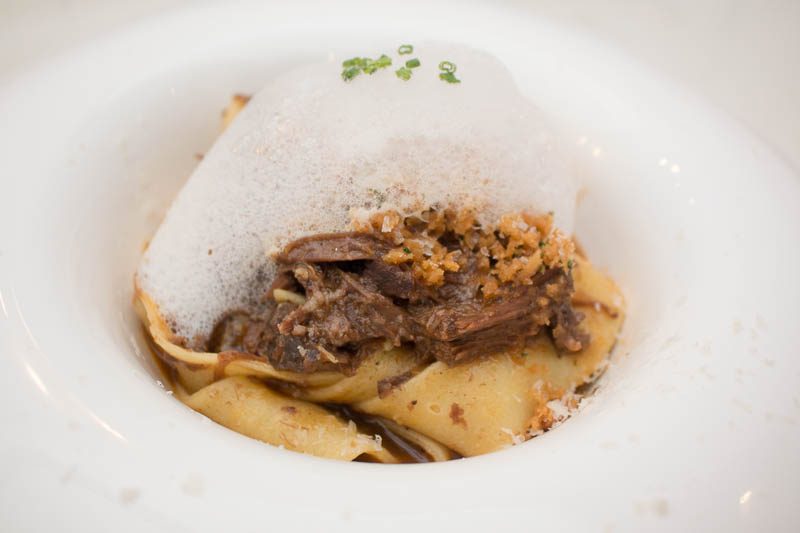 We also got some mains to try out, the first being the Wagyu Beef Cheek Tagliatelle (S$28++). Served with handmade thick cut pasta, this allowed the sauce to cling on to every strand of pasta well. The texture also gave it a nice bite, contrasting with the beef. 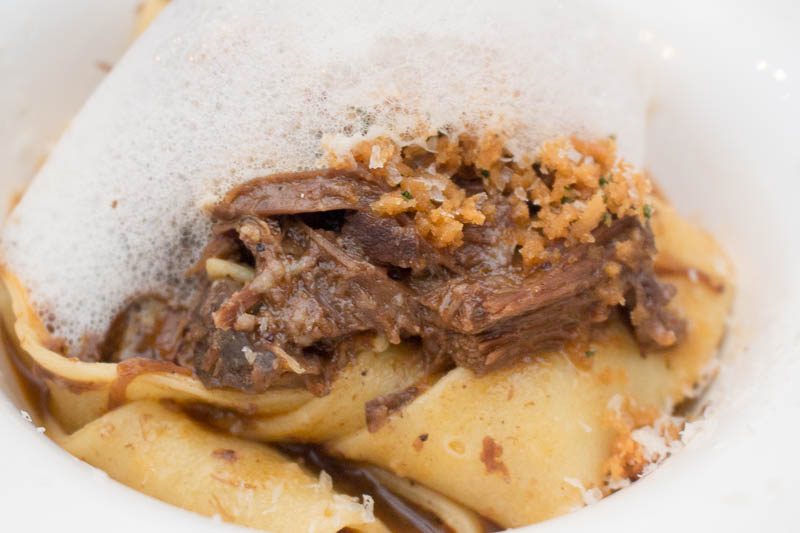 I liked how the beef was melt-in-your-mouth tender, packed full of flavour from the red wine it was cooked with. Although the truffle foam didn’t do much for me in terms of taste, it was still a decent plate of pasta. 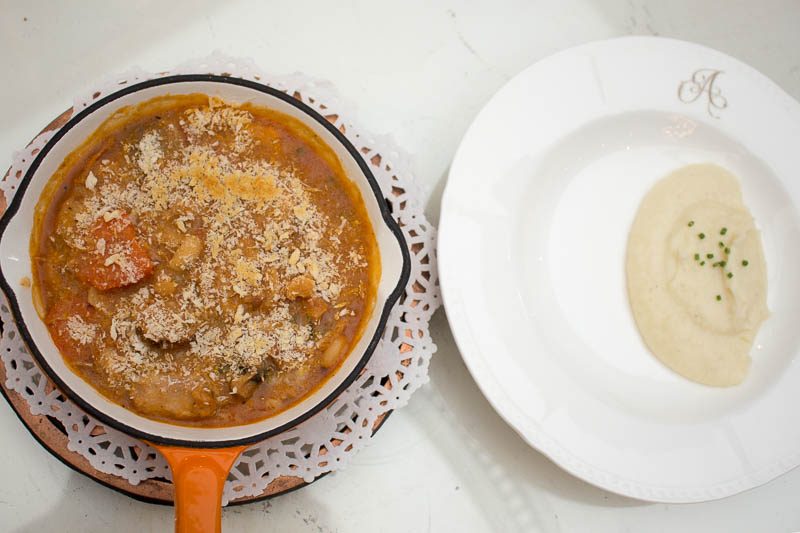 We also got the French Chicken and Sausage Casserole (S$22), which was served in a deep-dish pan. Braised chicken, Toulouse sausages and cannellini beans were cooked in this tomato-based stew. A side of mash was served separately too. 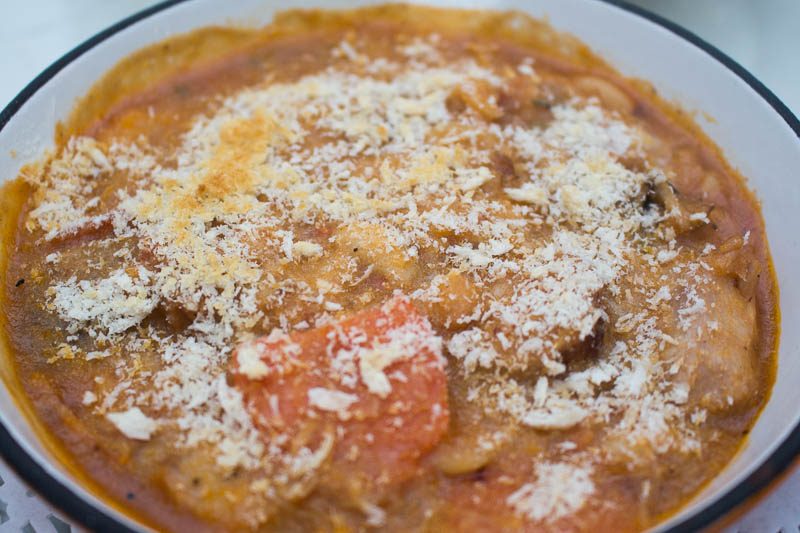 The sauce itself was a good balance between sweet and tangy, which added loads of flavour for the protein sources in the stew. I liked how hearty and comforting this dish was, perfect on a rainy day. 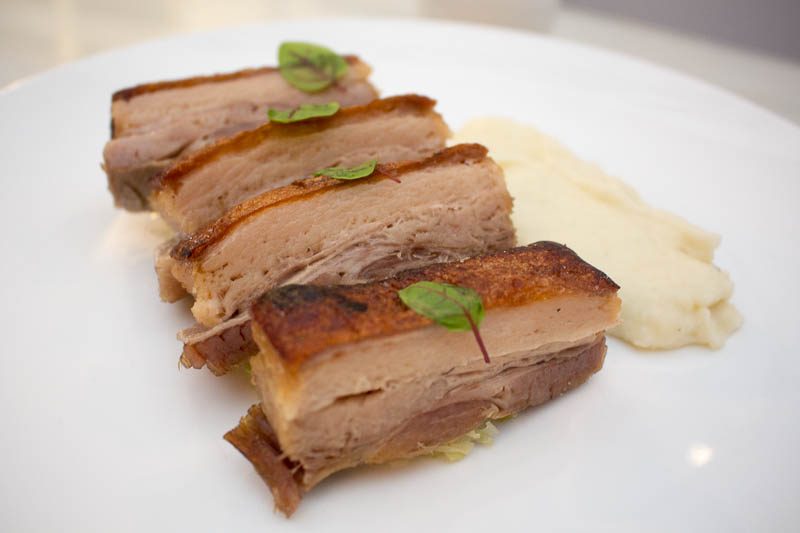 We had the seasonal special as well, which was the Crispy Pork Belly Confit (S$28++). The pork belly was cured and confit in duck fat for a whole day, before being fried over low heat. I liked how it was tender and succulent, with the perfect ratio of fat-to-lean meat.

My only gripe would be the skin, which was thin but lacked the crunch I desired. 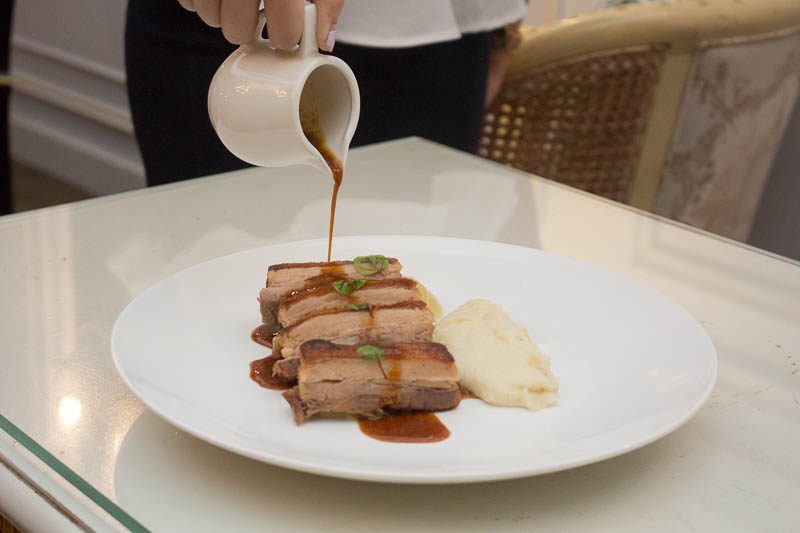 This was accompanied with braised savoy cabbage, as well as apple puree and a drizzle of a mustard-blend sauce. I liked how simple yet well executed the cabbage was, which complemented the sweet puree. The sauce had subtle tangy and spicy notes to it, which helped to cut through the richness of the pork belly.

We then finally moved on to the souffle pancakes, which I was more than delighted to know that there were five variations of them. Lucky for me and my tummy, I managed to have four of them.

Chef Pang has never served souffle pancakes before, hence, he came up with the batter solely based off souffle, and how he would imagine it to be. Well, after trying them out, all I can say is Chef’s imagination is on-point. 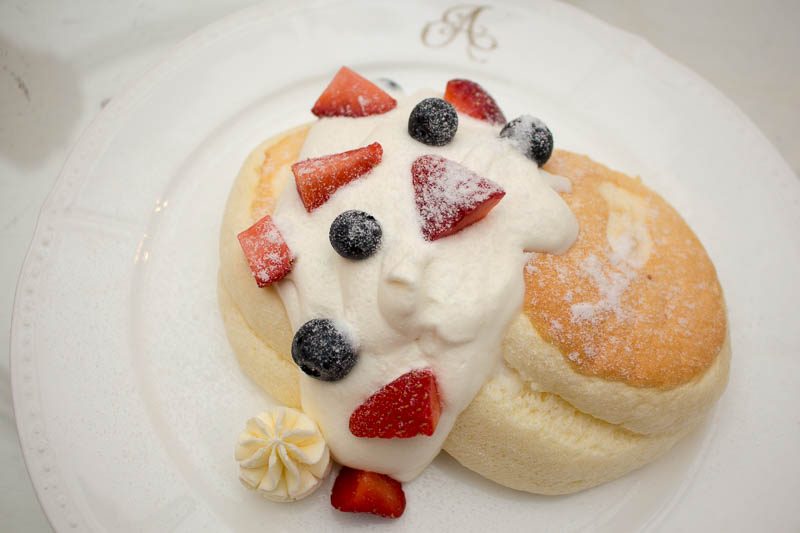 The first one we had was the Tres Berries (S$16++), which were two fluffy pancakes paired with vanilla chantilly cream, fresh berries and honey maple syrup. This was a classic pairing that would never go wrong. 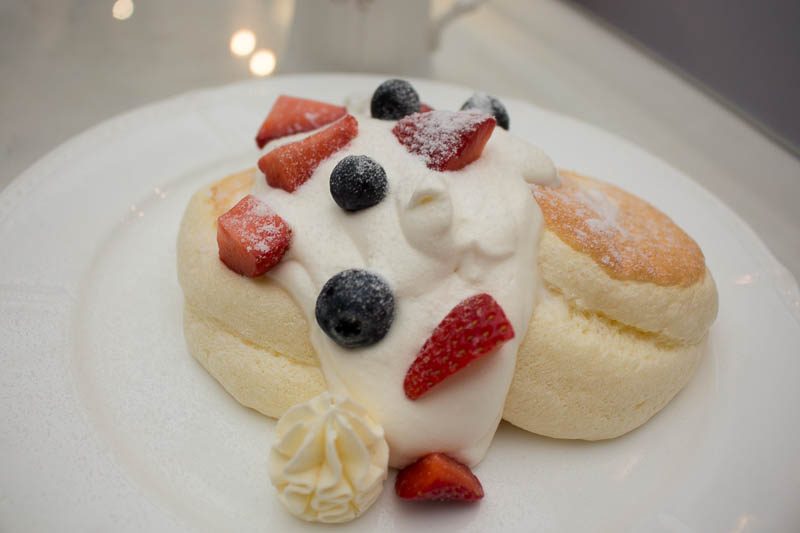 I loved how the fluffy and airy pancakes went perfectly with the light chantilly cream. The berries also added a touch of tanginess to balance out the flavours with the sweet syrup. 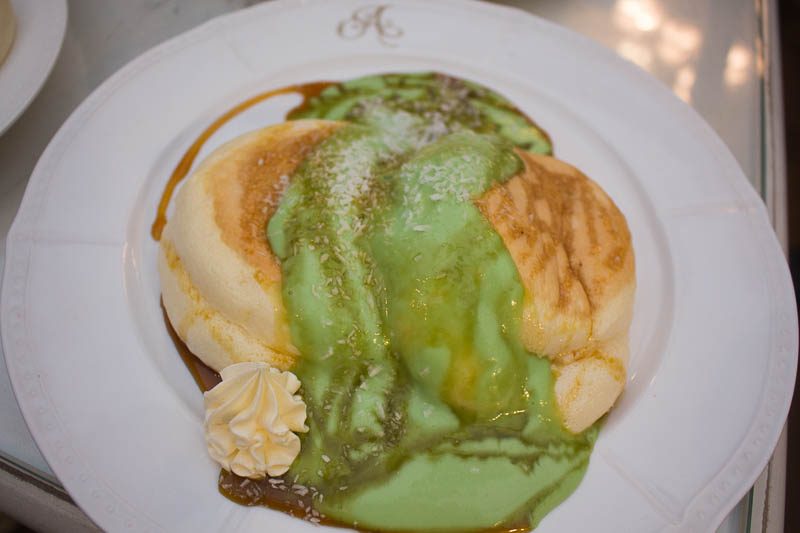 I loved how Chef Pang included a locally inspired flavour in the mix, which happened to be one of my favourite snacks, Ondeh Ondeh (S$16++). It had the same jiggly pancakes that melted in my mouth almost instantaneously.

It was served with dollops of pandan-flavoured custard, topped with gula melaka syrup and coconut flakes. This indeed tasted exactly like an ondeh ondeh, but more rich and decadent. I was pretty impressed on how the flavours were nailed so well, although I must admit this would be heavy to down on your own. 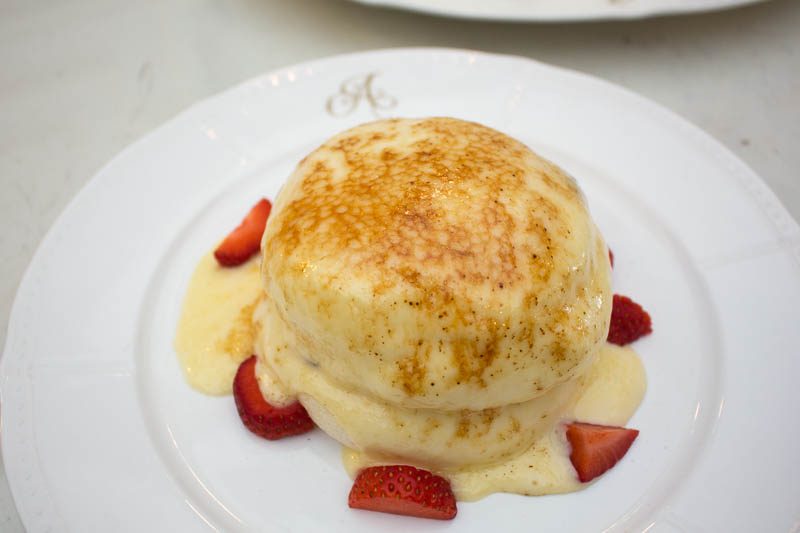 We also got the Creme Brulee (S$16++), which intrigued me as I never thought souffle pancakes and creme brulee could go together. Well, I was wrong as this ended up being my favourite version. The pancakes were enveloped in vanilla custard, with a thin layer of torched caramel over it and slices of strawberries. I loved how the custard and caramel mix gave more dimension to the dish, whilst the strawberries were a refreshing touch so it didn’t get too overwhelming. 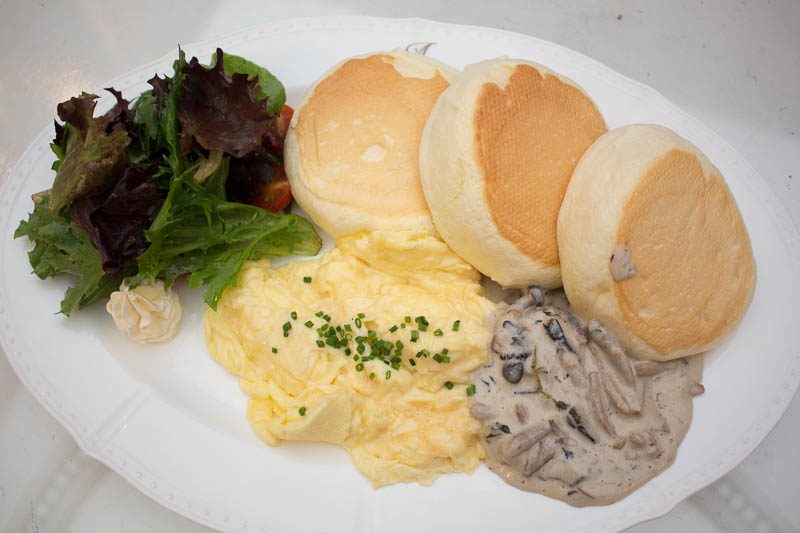 We also got to try a savoury rendition called the Forestiere (S$16++), which had three pancakes paired with creamy mushrooms and scrambled eggs. It also came with a side salad, to make for a filling and well-balanced meal. This actually paired really nicely together. 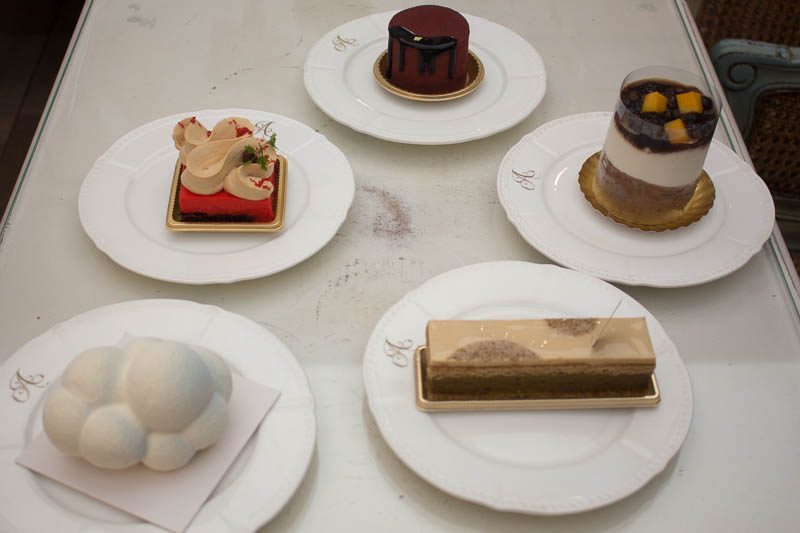 Finally, moving on to dessert time, Chef Pang actually came up with five new creations which were so different from the normal cakes I’ve had. 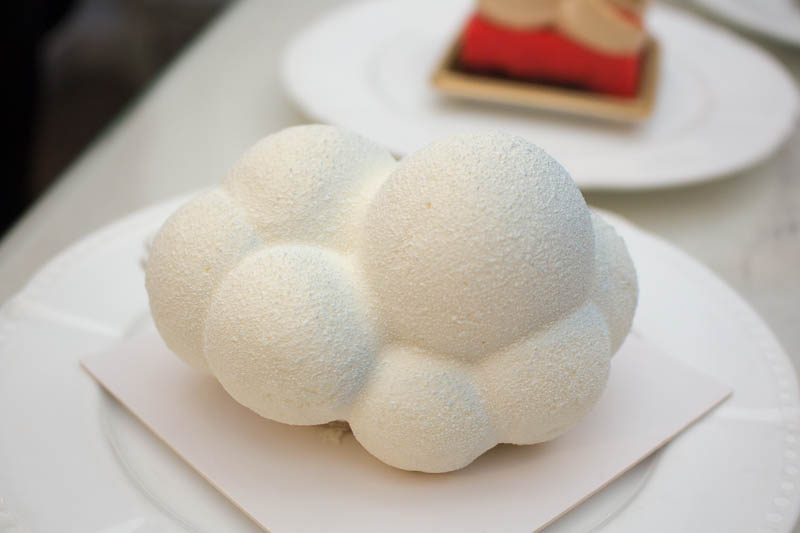 If I had to pick, the Fluffy (S$13) would be the one that intrigued me the most. It was intricately formed like a cloud, with bluish-white gradient hues to it. The outer layer was a white chocolate mousse, which was a tad sweet on its own. Hence, it complemented the tart strawberry cremeux and passionfruit lemon jelly perfectly. It made for a good balance between rich and refreshing. 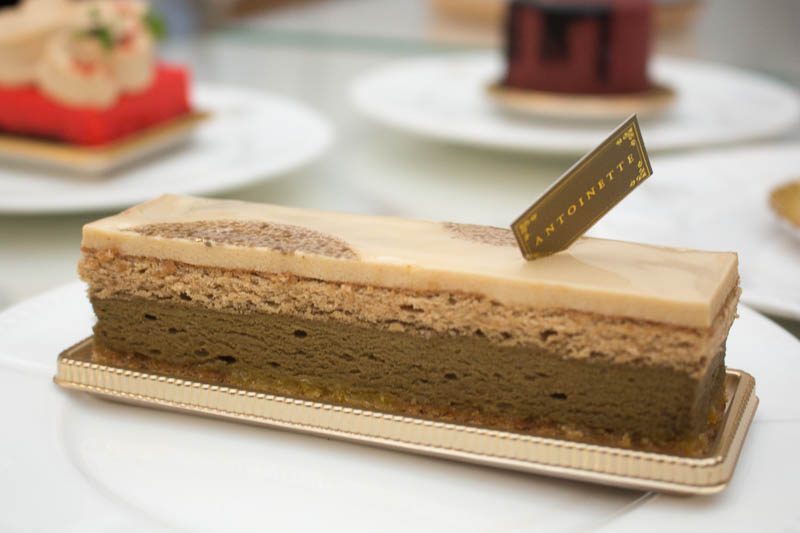 The Kyoto (S$9) deserves a special mention as well, which is made with hojicha. This roasted green tea has nutty and toasty notes, which was distinct throughout the entire cake. Paired with Okinawa black sugar, this cake was sleek and pretty light on the palate which was much needed after all the food.

After trying out bits and pieces of Antoinette’s new menu, I must say that Chef Pang innovations are unique and delicious. I exceptionally like how he tries to infuse some local delights into his food for a touch of nostalgia.

While I may not have mentioned this earlier on, his Earl Grey Bubble Tea (S$9) cake was one of my favs too. I liked the balance between the salted chantilly cream cheese and tapioca pearls that were sitting atop the earl grey sponge. His range of souffle pancakes was delectable as well, making me spoilt for choice. If you are a fan of Antoinette desserts, the new menu is one for you to drop by and treat yourself!

ChopeDeals: Save 10% at Antoinette >