Lovers of fine dining will be familiar with one Michelin-starred French restaurant Bacchanalia, which closed temporarily in September 2018 for its two-month revamp after its head chef, Luke Armstrong, left the restaurant.

Now, taking the reins at its newly renovated premises at Hong Kong Street is 27-year-old French chef Vianney Massot, who not only brings to the table an entirely new French menu, but had also the experience of having run the now-defunct two Michelin-starred L’Atelier de Joel Robuchon. 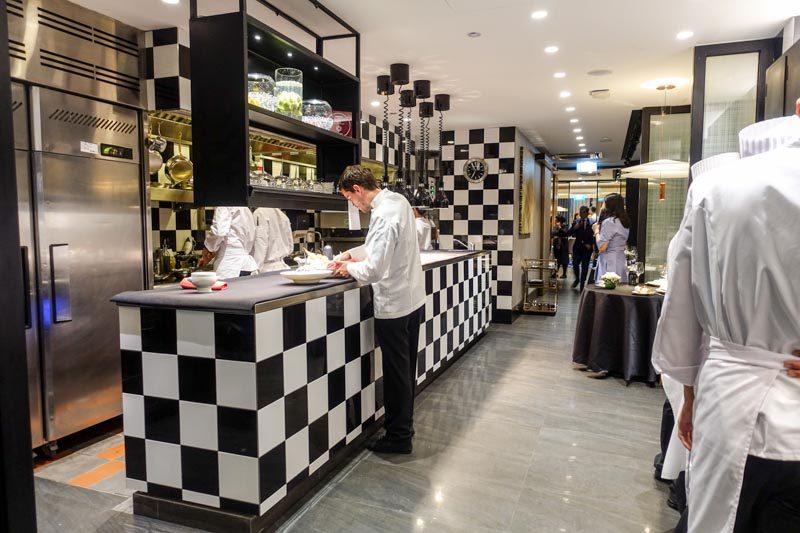 Walking into the brand new 24-seater Bacchanalia almost feels accidental, as if I walked through the back doors and stepped into the kitchen instead.

This is no mistake: the open kitchen concept, where diners are greeted personally by chefs upon entering the restaurant, is a way for the restaurant to be more intimate and personal with its patrons.

Plus, the chic monochrome interior is a huge improvement from its previous decor, which comprised of metallic shelves and grey-and-orange tile flooring, which reflects a sleekness and modernity that it previously didn’t have. 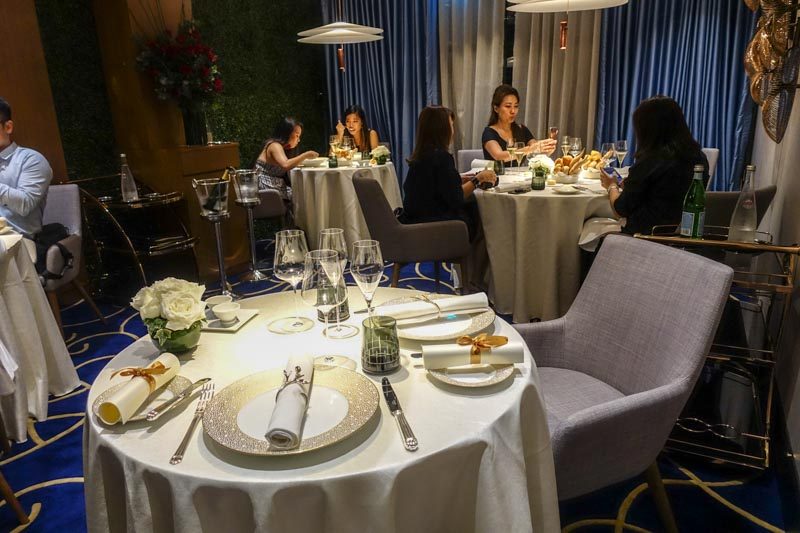 With velvet blue carpeting with gold ribbons, its cosy 16-seater dining room was posh and luxe, while oozing a sense of comfort and privacy at the same time given that each table can only sit up to four people.

We were treated to a six-course dinner from the Seven-course dinner degustation menu, as several of its key seasonal produce weren’t available yet.

You can choose to have its Five-course lunch degustation (S$158++) or its Seven-course dinner degustation (S$298++), featuring Chef Massot’s well-honed French techniques while incorporating plenty of Asian spices, ingredients and flavours, which were a pleasant but familiar surprise. An exquisite dish that was almost too pretty to eat, the Scallop Ravioli with Kumquat Emulsion, Imperial Caviar and Young Baby Leek was an indulgent first course.

Delicate uni pearls sat atop the scallop ravioli (both imported from Hokkaido), and the stalk of young baby leek was topped with imperial caviar. The ingredients sat in a kumquat emulsion with Sarawak black pepper and a drizzle of chilli oil.

The scallop ravioli was delightfully springy, coupled together with the slight spiciness of the kumquat sauce, it was refreshing and whet our appetite for more. 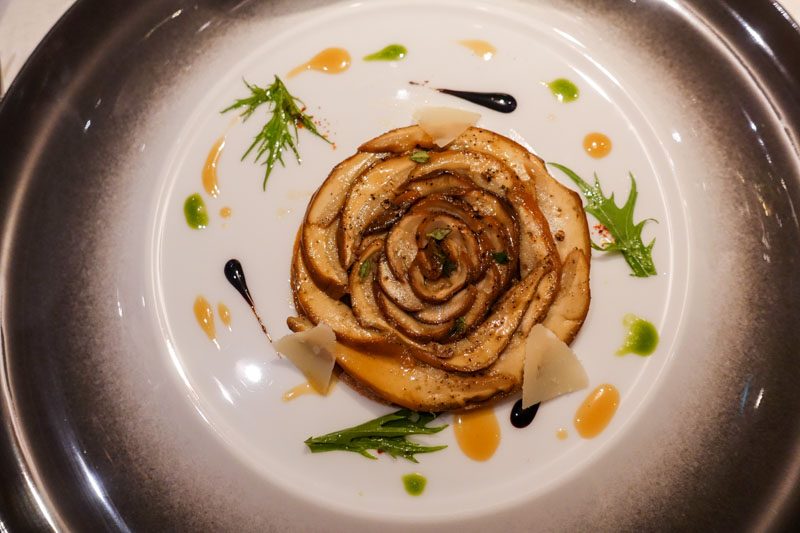 Shaped like a rose, the Cepe Tartelette and Eggplant Caviar comprised French Porcini mushroom and eggplant slices, which sat on top a crispy tart, and topped off with parmesan shavings.

Texturally speaking, this dish was an absolute delight; the mushrooms and eggplants were supple and sweet, while the base was crispy like a thin biscuit. It was paired together with a mushroom consomme, which we were told to sip in alternate bites with the dish.

The chicken essence and ginger in the consomme was surprisingly light and delicate, allowing us to cleanse our palate in between bites of the rich and earthy mushroom and eggplant slices. 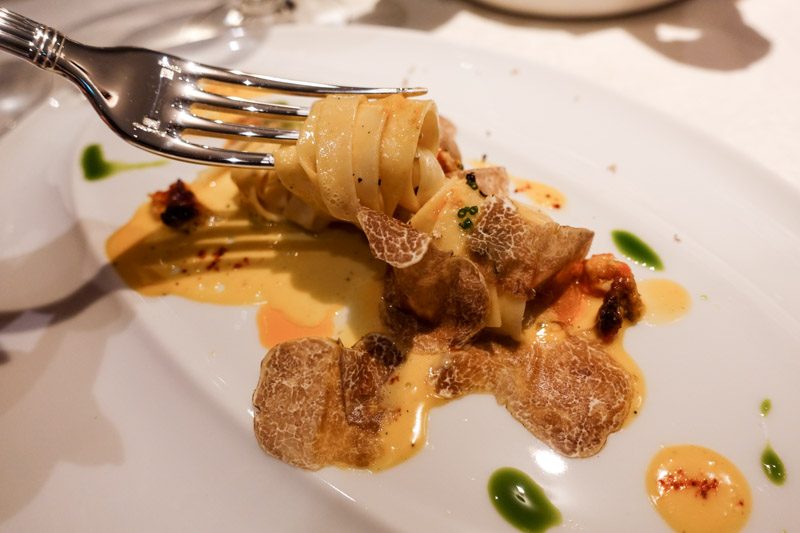 The next dish, Alba White Truffle Tagliatelle, was creamy and luxuriant. Handmade ribbons of pasta was coated in a roe sauce made with Shanghai hairy crab, and Chef Massot personally came to our tables to shave the white truffle for each of our dishes.

What I loved about the pasta was how smooth and well made it was. Thin and springy, the strings of pasta fell apart and melted in my mouth, reminding me of delicate handmade egg noodles.

While the crab roe sauce was sweet and creamy, I couldn’t taste the Shanghai hairy crab at all, which was a huge pity. The white truffle shavings added a hint of garlic and musky aftertaste to the dish, which I really liked. 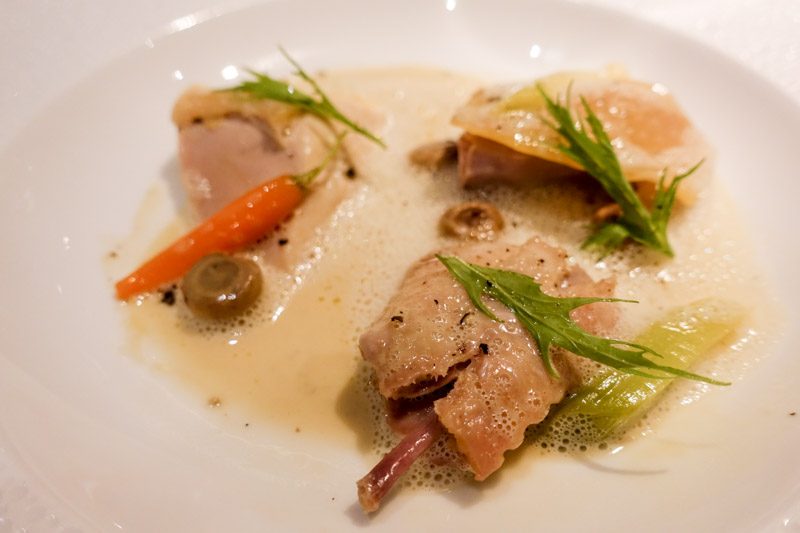 The chicken used in this dish is poulet de Bresse chicken — specially bred in Bresse, France, it is supposedly lauded by critics as the most delicious variety there is. It was supple and tender, though it had a fair amount of ligament which made it hard to pry cleanly off the bone.

The only resemblances it had to chicken rice were the rice and chicken. Tastewise, the risotto was creamy with a melted cheese-like consistency. The ivory sauce was sweet and light, with a tinge of cognac and port wine that added an extra kick of flavour. 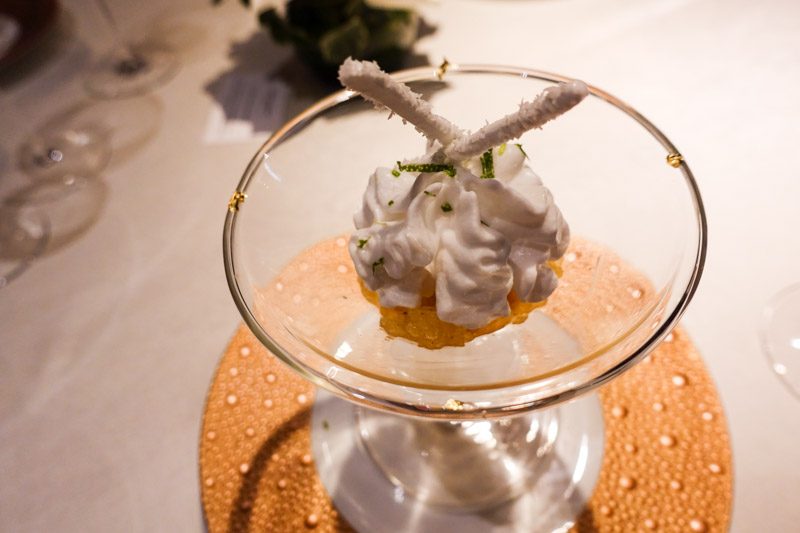 Rounding up the meal was a Fresh Tropical Fruit medley of frozen diced pineapples and passionfruit.

Served with coconut foam and amber rum granite, it was refreshing and invigorating. The frozen pineapples were acidic and sharp, reminding me of a lemon slushie in a cup.

It was nicely balanced out by the sweetness of the light coconut foam, as well as the burst of tropical tangy flavours from the passionfruit. 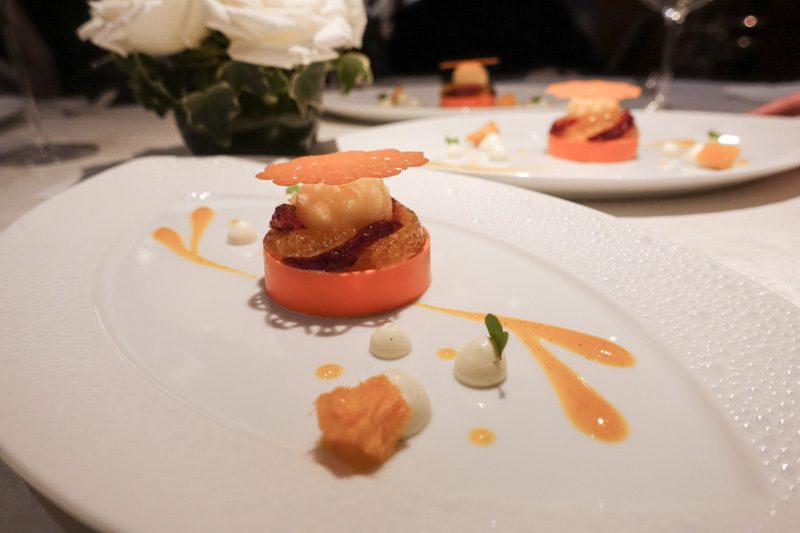 Rounding up the meal was the Orange and Citrus Marmalade. Made with blood oranges, this dessert is served together with bergamot sorbet, Earl Grey tea jelly, dollops of light vanilla cream, as well as crisp-dried oranges.

The attention to detail — down to every drop of sauce and shaving of truffle — was fantastic and the dining space was really luxe. Though its strong French influence is clear as day, I was pleasantly surprised to see familiar Asian flavours being incorporated into its dishes, such as Shanghai hairy crab, kumquat sauce, as well as a more atas version of chicken rice.

While I wouldn’t spend S$298++ for a seven-course dinner, it’s easy to see why others might. Each course at Bacchanalia is gorgeously plated and the flavours in each dish are so well thought out. If you’re feeling luxurious, this is the place to impress the missus.