Ban mian is a common handmade Chinese noodle hawker fare to have on rainy days, or when comfort is needed when one is unwell. I’m sure there is at least one ban mian stall found in your neighbourhood food court or kopitam, or maybe even two depending on the size of the premise. 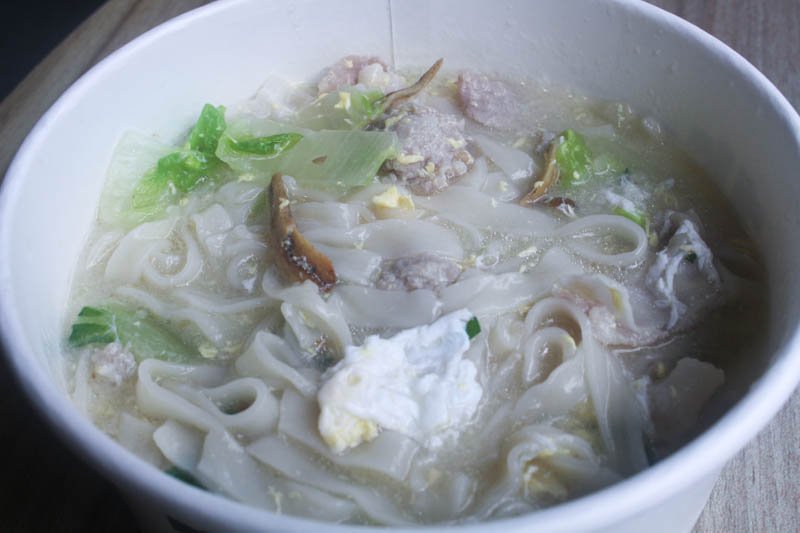 The base of this noodle dish consists of soup, noodles, vegetables, minced meat, egg as well as anchovies (more commonly referred to by locals as ikan bilis).

There have not been many ban mian places that impressed me so far, and most ban mian noodles end up being too starchy for my liking, or just leave me unsatisfied with my meal.

I ordered the soupy ban mian from both ban mian chains, to make this a fair comparison. 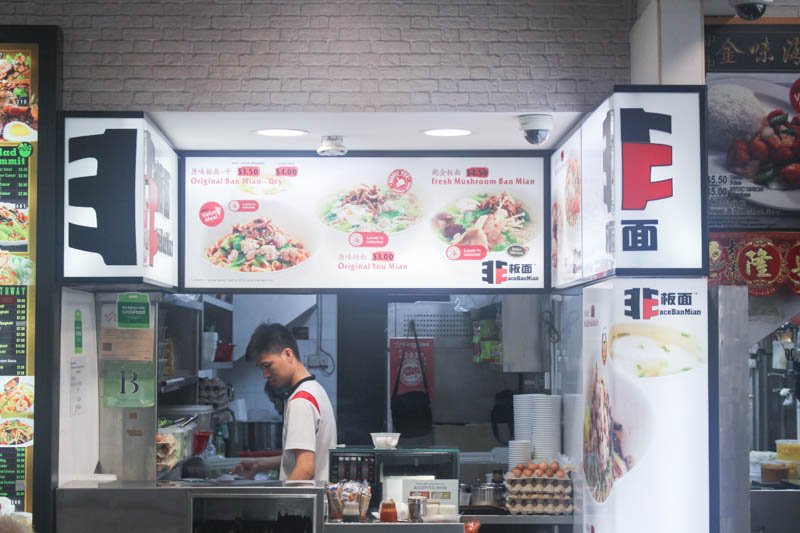 The first ban mian contender is Face Ban Mian, and the franchise I picked is located in Sengkang West, more precisely at 308 Anchorvale Road. You will definitely not miss this stall with its brightly lit storefront, with the Face Ban Mian branding all over, with a simplistic white background and the dishes plastered all over the signage.

This stall does not particularly showcase soup ban mian at the front-facing signage, but nonetheless you are able to order for it.

The Soup Ban Mian is priced at S$4.50, which is pricey considering it is just ban mian. 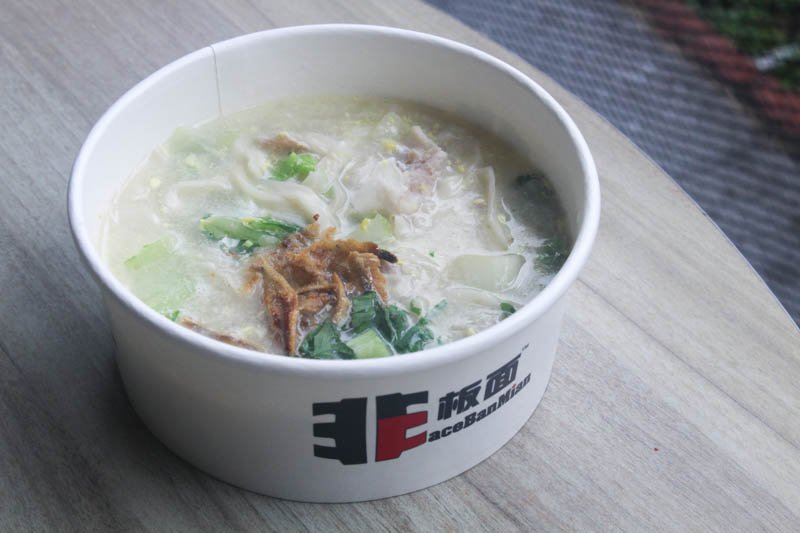 An issue I found with Face Ban Mian is that they serve food in disposable cardboard bowls regardless of you having it at the food court or to-go. This goes against being environmentally-friendly, so if possible, it’d be smart to bring your own container. 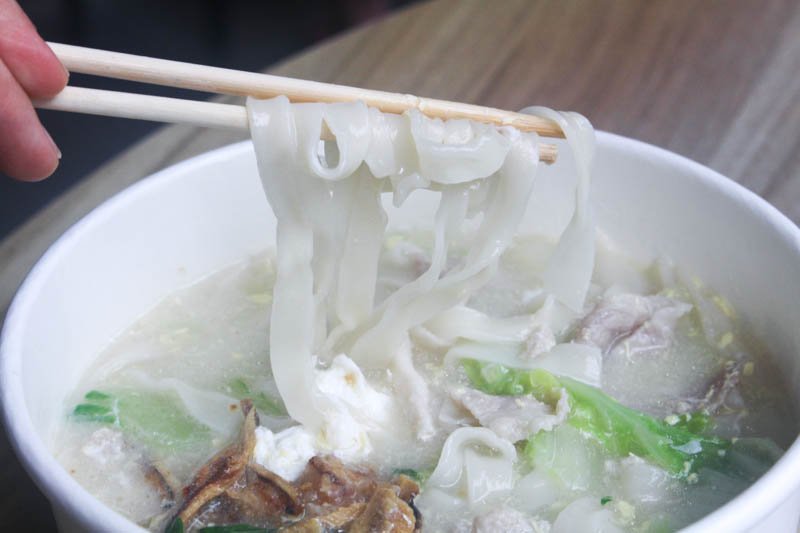 Sinking my teeth into the noodles surprised me with delight. The ban mian noodles were not al dente, in fact, it was so soft and silky. The noodles did not have a powdery and starchy mouthfeel, and they slid down my throat with grace. 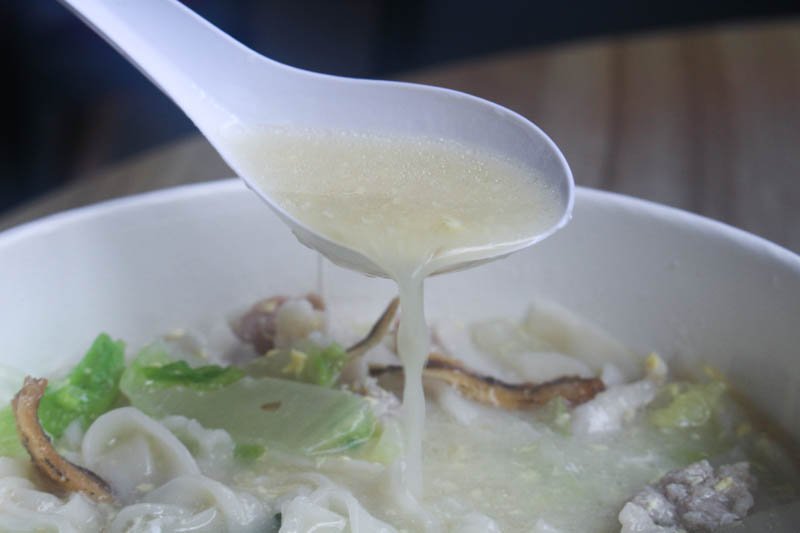 The soup meanwhile brought the ban mian experience to another level. After taking a sip of the broth,  I found it to not have a sweet aftertaste, yet not intensively savoury, unlike the ban mian‘s I’ve tried elsewhere.

In fact, it was oilier than usual and it could be due to the added pork belly slices, which I definitely am going to rave about after diving into the minced meat. 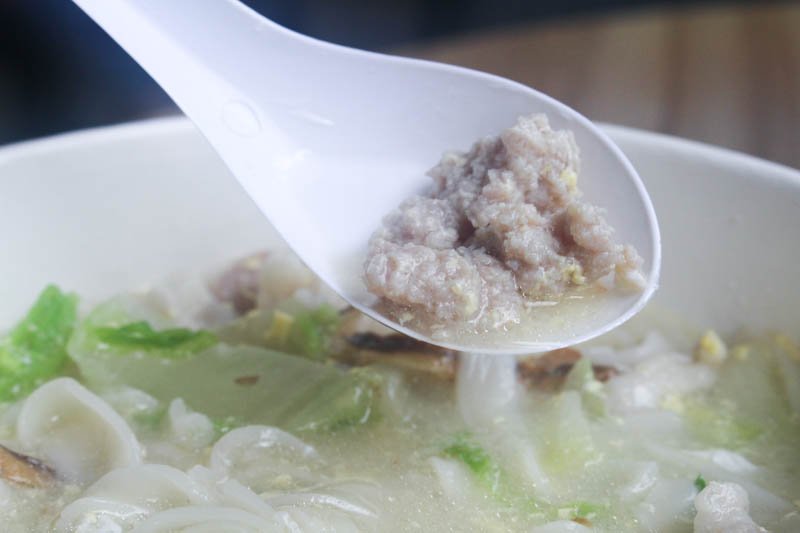 The minced meat was cooked well and had a nice delicate texture, indicating that the ban mian was boiled to the right temperature, with the right timing. 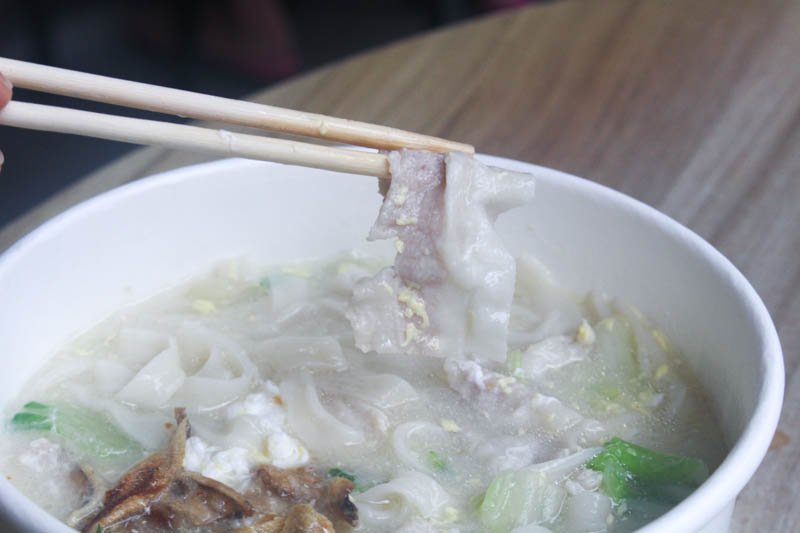 The surprising part of this dish was the slices of pork belly added, which is not a common ingredient added to ban mian.

Biting into the pork belly, it gave off a pleasant umami taste, and contributed a beautiful, tender texture to the ban mian. 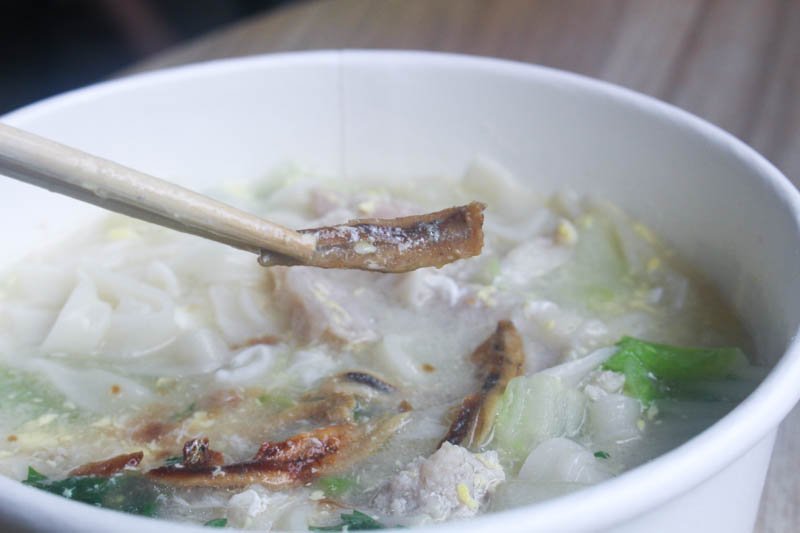 Meanwhile, the anchovies were definitely fishy and salty, enhancing the flavors of the soup and gave it a delightful savoury taste that totally sealed the deal. Although I had a big meal before trying out this bowl of ban mian, it was so good that I finished it on a full stomach. 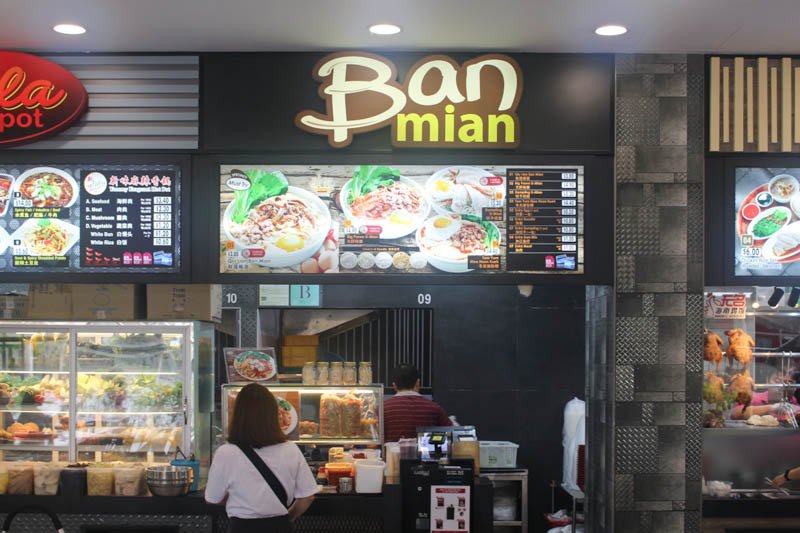 This ban mian stall is found at Kopitiam City, located next to Buangkok MRT. 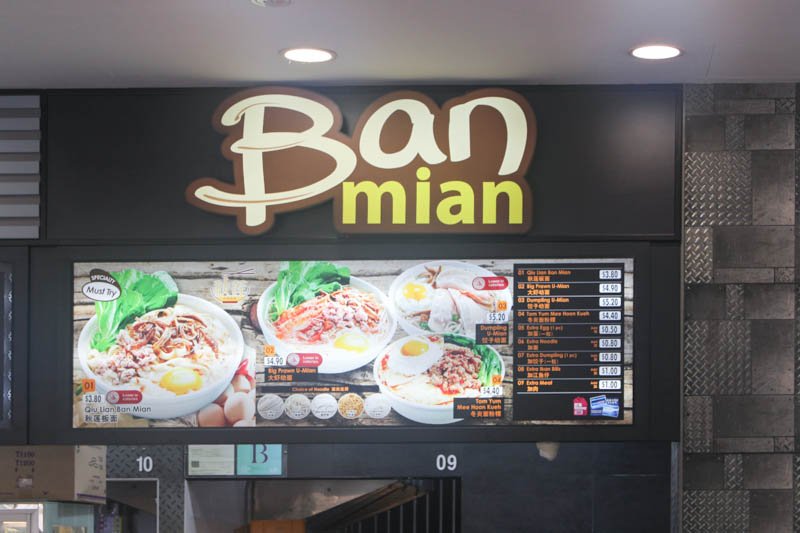 Qiu Lian Ban Mian can be found on the first item on the menu list. After trying out Face Ban Mian, my expectations for ban mian was raised. 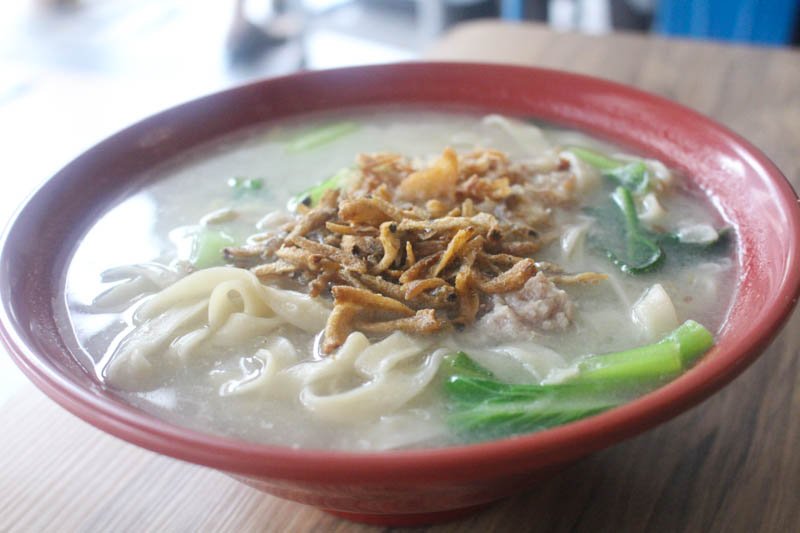 I ordered the Qiu Lian Soup Ban Mian, which costs S$3.80. The bowl was served piping hot, and the bowl as a whole looked promising as it was almost filled to the brim. 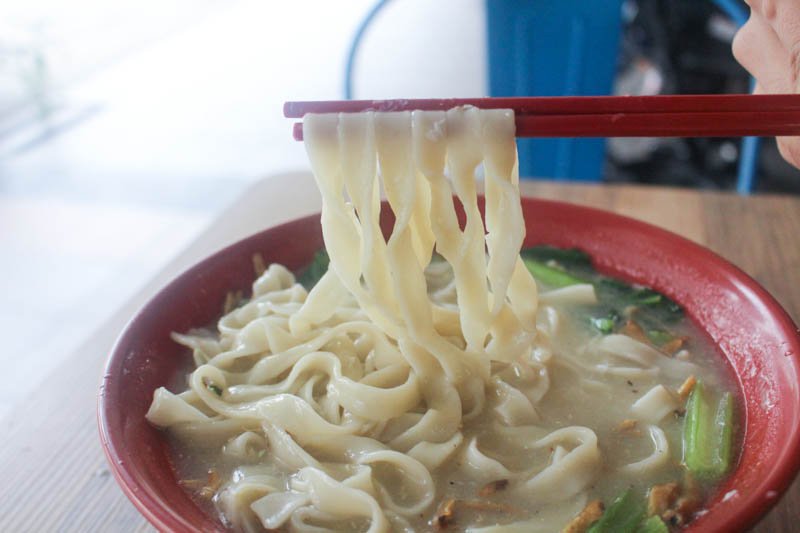 The noodles were slightly starchy with an al dente bite. To be honest, it was mediocre when compared to Face Ban Mian’s noodles. Nonetheless, the amount of noodles will definitely fill you up. 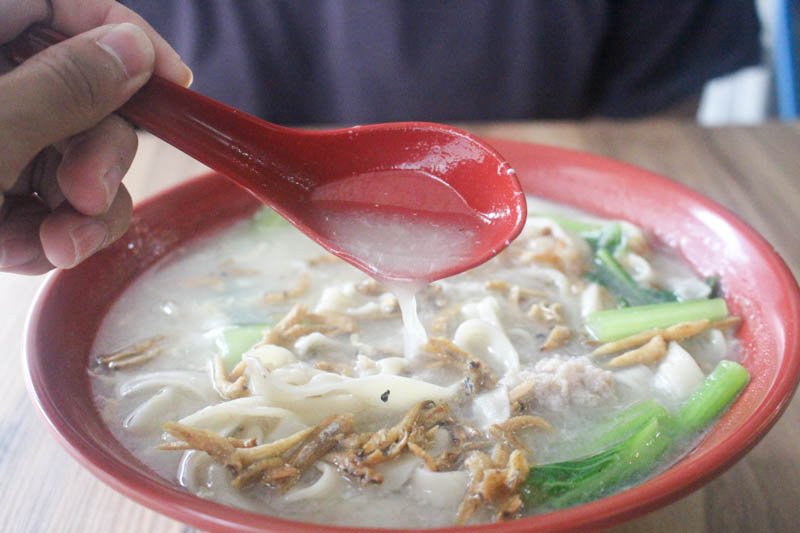 Soup wise, it was noticeably too watered down, with the soup distinctively drowning the bowl of ban mian before I even dove into it. The other factor that made me draw to the conclusion that the soup was diluted was its taste. It had a slight fragrance which was not very noticeable. 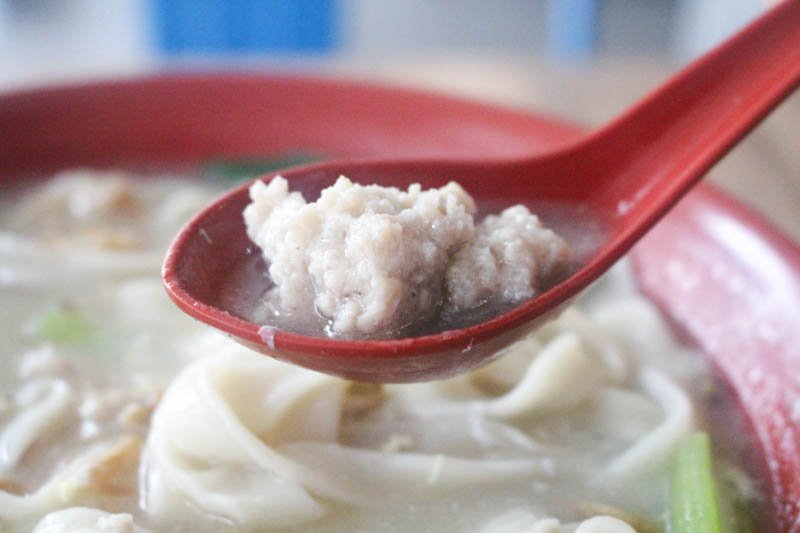 You can’t really go wrong with minced meat in ban mian, and Qiu Lian Ban Mian did not disappoint with its savoury minced meat. In fact, it was on par when compared to Face Ban Mian’s minced meat. 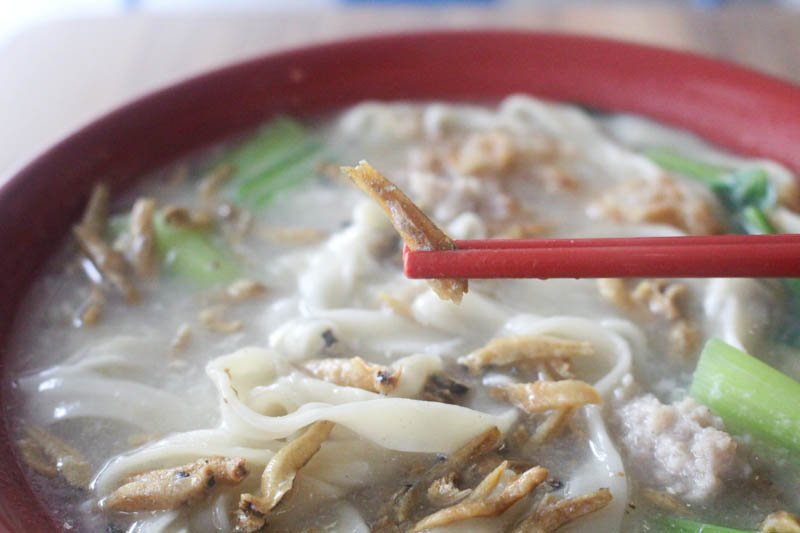 The anchovies were not as salty as the ones in Face Ban Mian, and complemented well with the entire dish.

Here’s the catch: I did not manage to finish the bowl of soupy ban mian despite being extremely hungry. That’s a telling sign that it was just not as appetising as Face Ban Mian—well, to me at least.

Quantity and value-wise, Qiu Lian Ban Mian definitely takes the lead, but what matters at the end of the day is the taste of the bowl of hearty ban mian, am I right?

Keep in mind that I did not get to the bottom of the bowl of soupy ban mian from Qiu Lian Ban Mian, and that was a telling sign coming from a big eater like me. A noticeable difference in the two bowls of ban mian was the vegetables. Face Ban Mian uses napa cabbage, while Qiu Lian Ban Mian uses xiao bai cai (little white cabbage).

With Face Ban Mian using pork belly slices in addition to the standard minced meat, it added a level of sweetness and a pleasant oily-yet-comforting mouthfeel, which made the soup much richer in taste compared to Qiu Lian Ban Mian.

Face Ban Mian definitely stole my heart, taking into account the fact that I managed to devour the entire bowl even after a huge meal. Meanwhile, I couldn’t even finish Qiu Lian Ban Mian despite being famished.

So, be your own judge—Face Ban Mian or Qiu Lian Ban Mian for the win?