In 2010, the restaurant used to be a small eatery at Maenam Beach, Koh Samui, Thailand serving only 18 patrons each evening.

As a result of its popularity, Barracuda Restaurant has been voted by Thailand Tatler’s magazine as “Best Restaurant” for three consecutive years from 2013 – 2015. 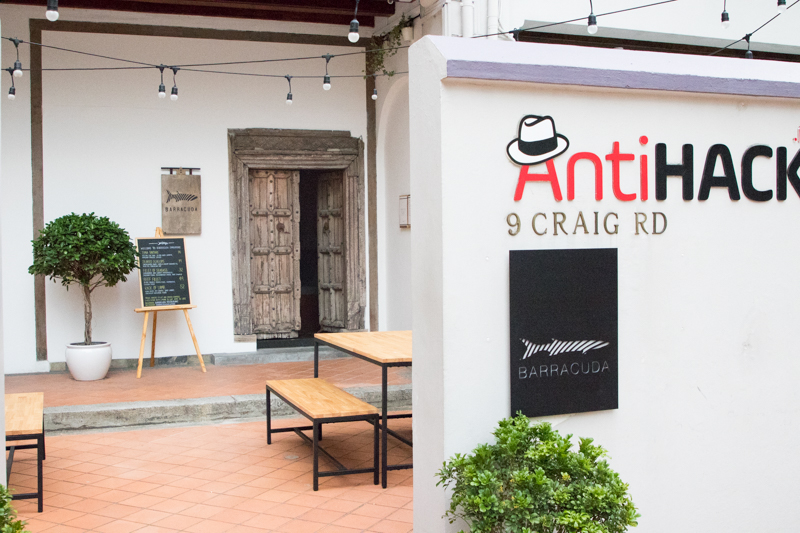 Barracuda Restaurant was hidden between shophouses, so we spent quite some time locating it as there were few signs visible. 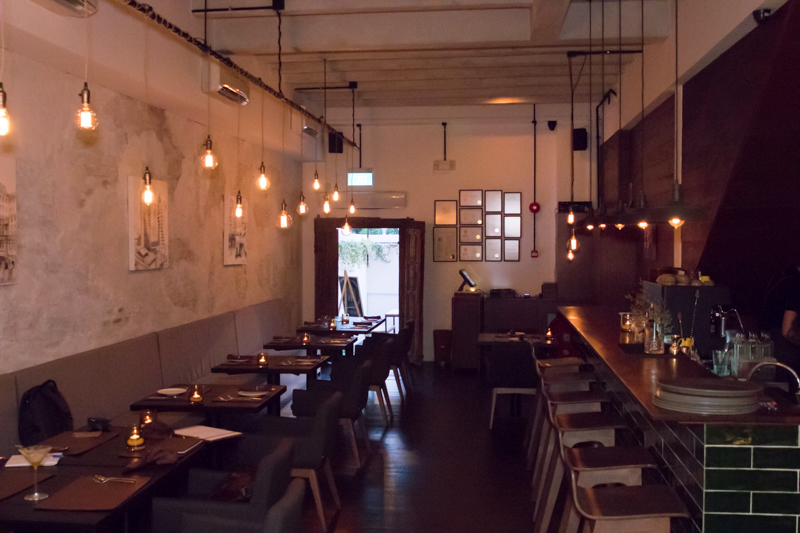 The three-month-old restaurant was dimly lit, with a rather moody wood and leather interior. The minimalistic menu with only several items was also originally from their Thai restaurant. 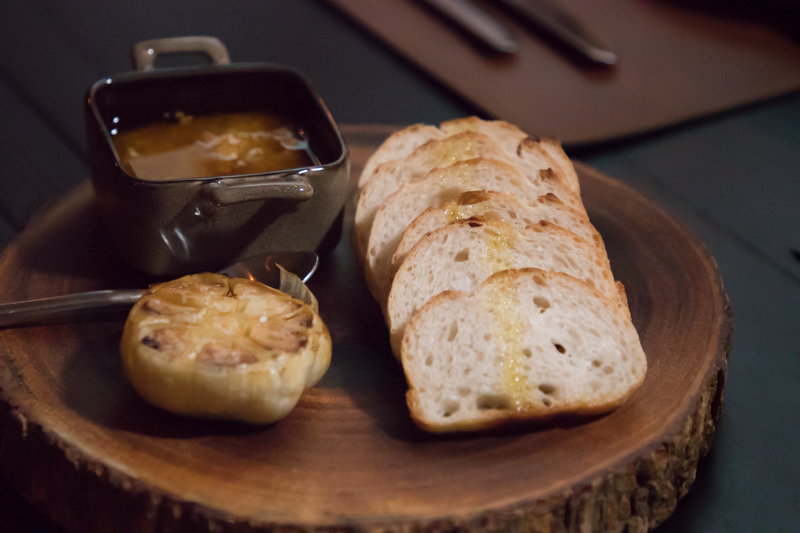 Every table starts off with a warm toasted baguette and a tomato confit as well as roasted garlic. The tomato confit has a subtle sweetness and was slightly acidic.

We dug out each individual clove of garlic and spread it onto our bread together with the tomato confit. I found that this combination opened up my appetite more. 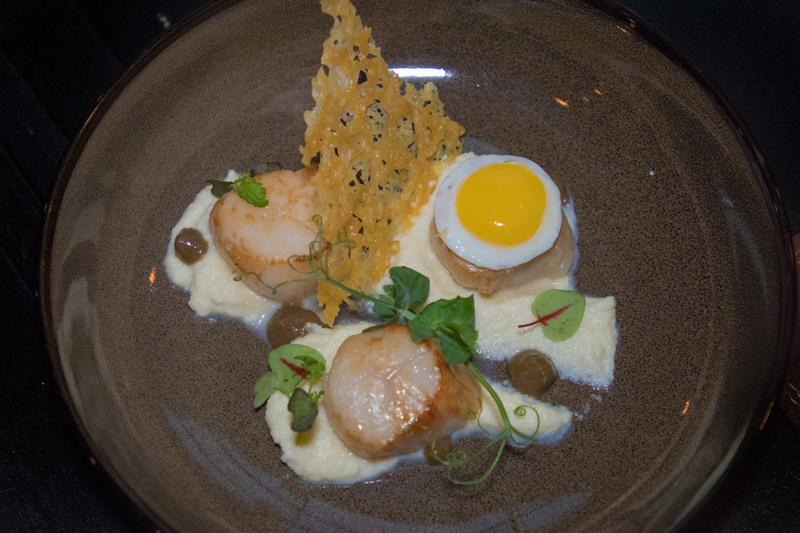 Our first dish was an appetiser, the Seared Scallops (S$19++). Cooked to perfection, the scallops came on a bed of cauliflower puree and raisins. I liked how the scallops golden-brown and crispy on the outside while they weren’t too chewy on the inside. 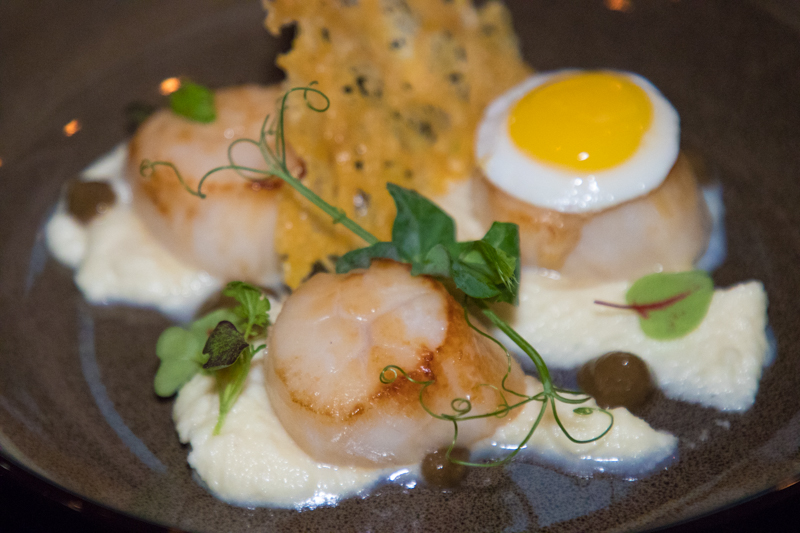 The cauliflower puree had a grainy texture which complemented the scallops and brought the dish together. If you find scallops too briny, the raisins help to cut through the savoury briny flavour of the scallops.

To top the dish off, a parmesan shard not only gave it a crunch but also added sharp savoury notes to the dish. The Seared Scallops were a great start to the meal and it had me excited me for what’s to come. 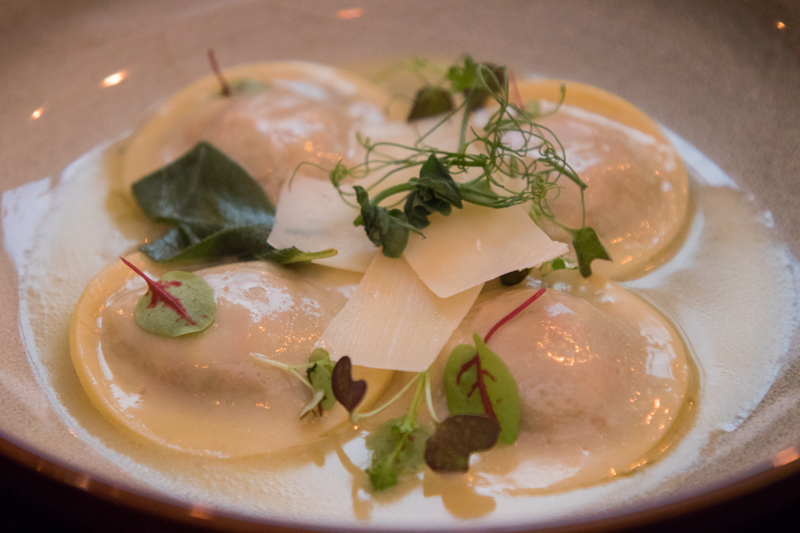 We moved onto another appetiser, the Homemade Ravioli (S$14++), with four delicate pieces of ravioli resting on a bed of sage butter sauce. The raviolis were packed with spinach and red spinach for a vibrant pink colour. 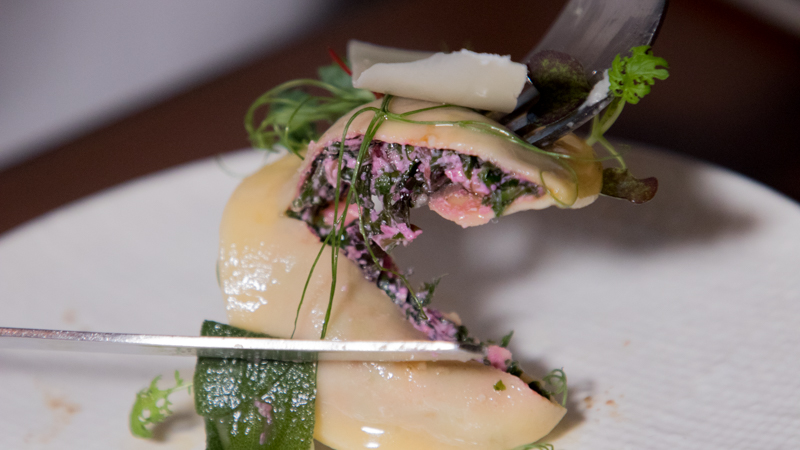 The spinach gave the dish an earthy flavour, with the sage butter sauce adding a floral note to round off the dish. I also enjoyed the addition of crunchy pine nuts into the ravioli filling. It provided a sweet nuttiness which helped to balance out the earthy flavours of the spinach. Although I felt that the skin of the ravioli was slightly too thick, the generous amounts of pine nuts gave a smoky flavour that made it more pleasant. 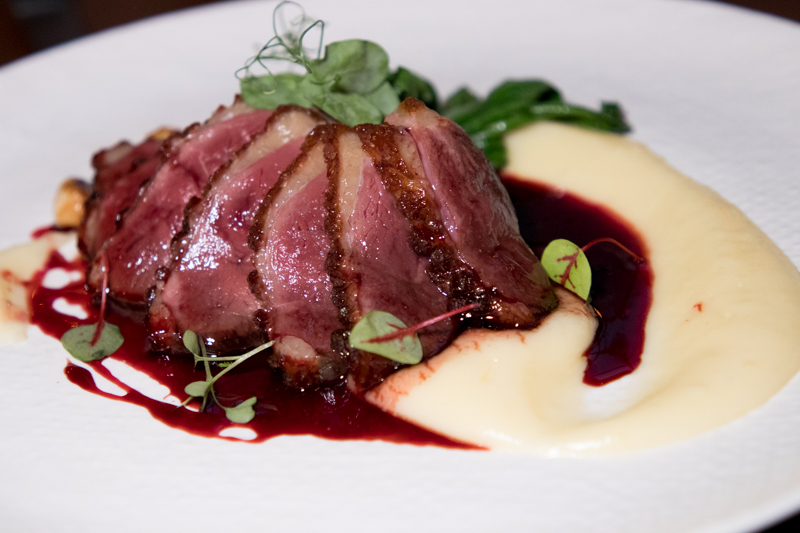 Next, we had the Duck Breast (S$39++) with a side of mash potatoes. Roasted till crispy, the skin hid a layer of duck fats which have been rendered to a melt-in-mouth consistency. 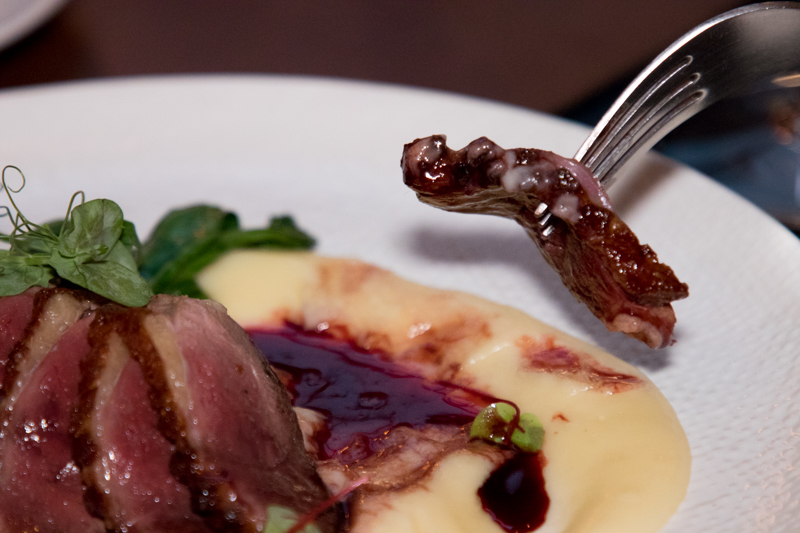 They drizzled cherry sauce over the dish, cutting through the gaminess and bringing out the sweetness of the duck. The sauce was also slightly tart which prevented the dish from being too greasy and jelak.

All things considered, I felt that the duck was still a bit too chewy and dry despite having so much sauce and mash potatoes. The owner also recommended we try the Yellow Fin Tuna (S$29++), which is sesame-crusted and seared on the outside, keeping the inside medium-rare. The fragrant roasted sesame gave the fish a prominent nuttiness which struck me on the very first bite. 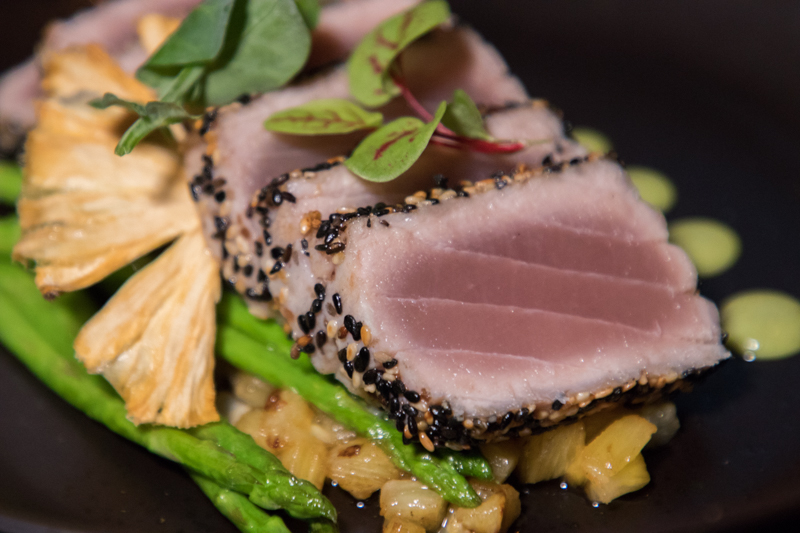 The tuna had a subtle sweetness and I favoured the juicy medium-rare centre which fell apart in my mouth easily. Beneath the tuna, mini cubes of roasted pineapples accentuated the sweetness of the tuna as well.

I wished the tuna had some marbling to it though, so that every piece would melt in my mouth easily. Dessert always goes to a separate stomach, so we tried the White Chocolate And Carrot Fondant (S$13++). The lava cake was airy and I enjoyed the thin layer of charred crust on the outside.

The carrot and white chocolate mix within was surprisingly mellow, though I thought it would be extremely sweet. 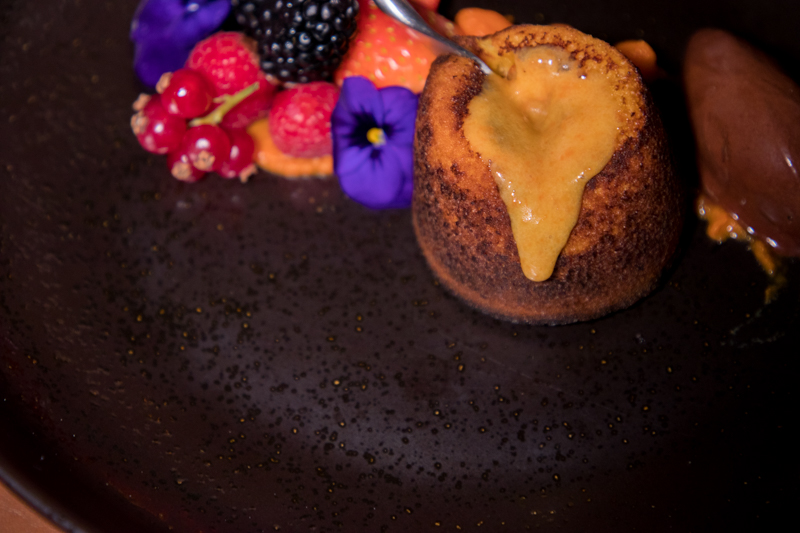 The filling was creamy and milky, seeping through the lava cake and disintegrating it. Accompanied by chocolate gelato, the slightly bitter taste contrasted the sweetness of the lava cake.

The combination of ice-cold gelato and warm lava cake never fails to impress me!

Barracuda Restaurant has certainly managed to impress me with its dishes. Fuelled by the passion of Chef Ferdinand with a humble beginning from back when they started out in Thailand.

With that being said, I felt that some dishes could be further refined, such as the duck breast which was slightly dry. On top of that, the prices were slightly steep so dining here definitely wouldn’t be a daily affair. 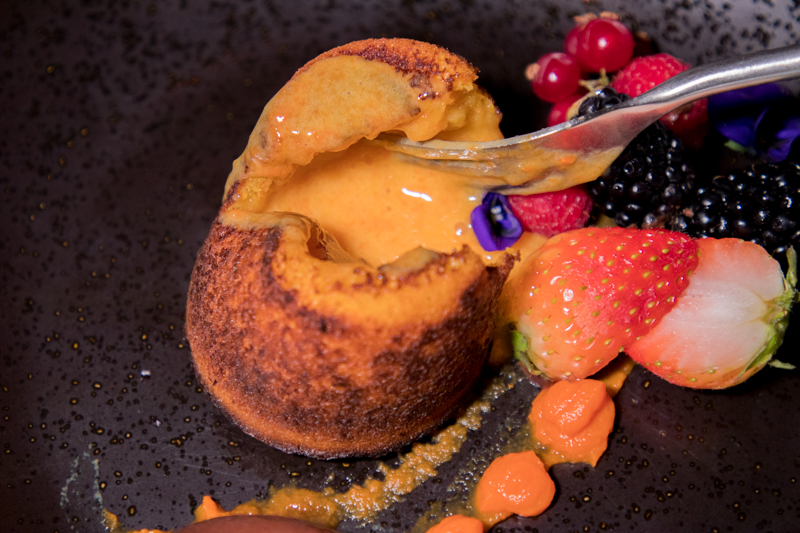 Despite that, I would still come back to Barracuda Restaurant if I am in the vicinity. The White Chocolate And Carrot Fondant is one of the main reasons I’d return.

That being said, I wish Barracuda Restaurant was open during lunch with a slightly less expensive menu.