This one needs no introductions. If you know your Hainanese curry rice, chances are you’ve been to Beo Crescent Hainanese Curry Rice in Tiong Bahru. 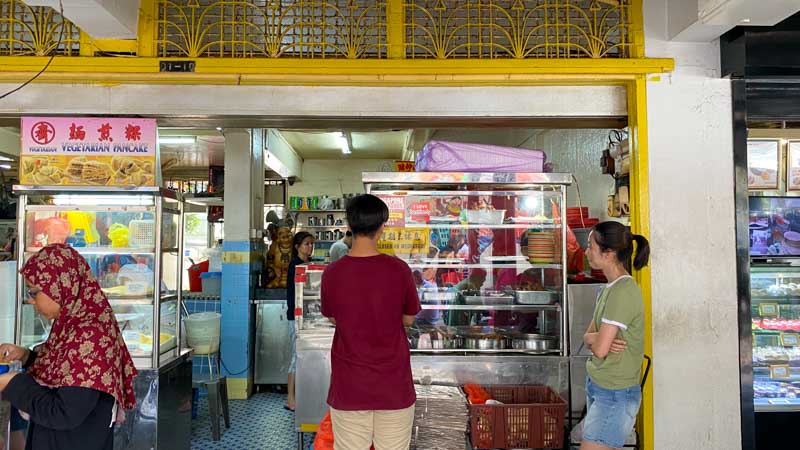 Well, more accurately, this is ‘No Name Hainanese Curry Rice near Beo Crescent’. But, let’s not fuss with semantics when it comes to Hainanese curry rice; the dish certainly doesn’t care. 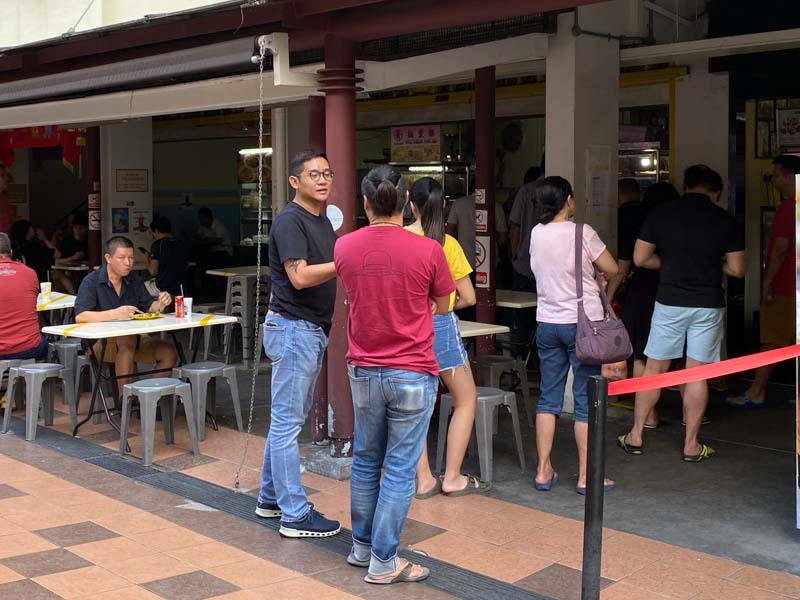 You’d think that a stall with no name would be difficult to find but its reputation precedes the lack of a signboard. I arrived a little bit before lunch and already there was a queue forming steadily behind the stall.

Beo Crescent Hainanese Curry Rice occupies a charmingly old-school coffeeshop space under a block of flats. When I say old-school, I mean old-school. 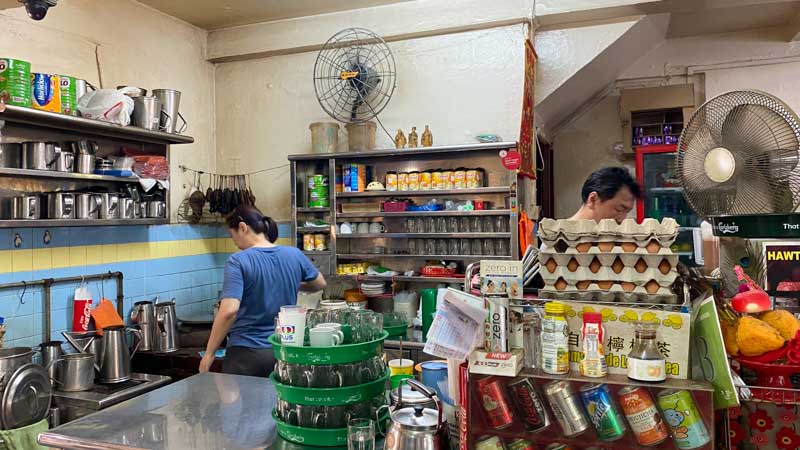 Stepping into the coffee shop is a doorway to a time that mass upgrading forgot.

The coffee shop was cramped, retaining much of its old-school architecture. The interior is a little dim, with yellowed walls and thick marble tables that remind me of my grandmother.

Having Hainanese Curry Rice is like cai png, there are usually a bunch of cooked items ranging from vegetables to meat dishes on display. You’ll be spoilt for choice when you get to the stall.

The auntie tells me confidently that everything is good and having done my due diligence on Beo Crescent Hainanese Curry Rice, I ordered two plates of their best. It’s always gloriously messy and a slightly chaotic amalgamation of ingredients. But, the beauty of Hainanese Curry Rice lies in its disorder, and a plate like this will only set you back about S$5. It begins with rice that starts at S$0.50 and a liberal ladle of their winning curry.

For this one, I had a serving of fatty Braised Pork, Stir-Fried Squid, Braised Cabbage and a Fried Egg. 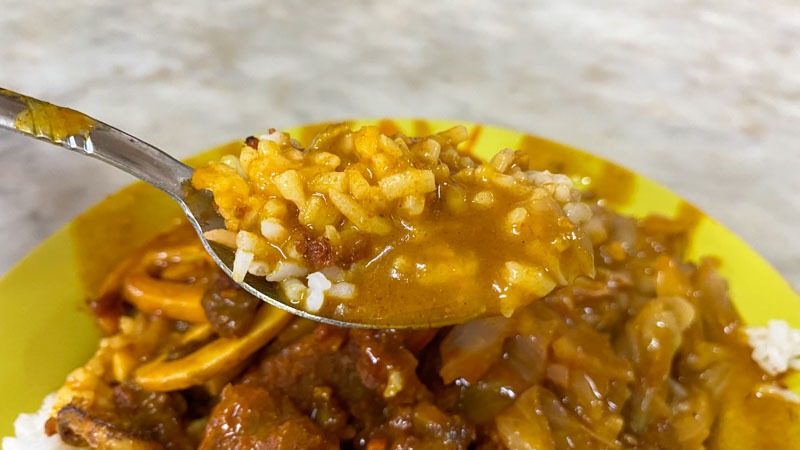 We’ll begin with what most people flock to Beo Crescent for—the curry. I took a loaded spoonful to make sure I could savour all that Beo Crescent had to offer.

A little looser than I expected but extremely flavourful. Rich but not overly cloying, the complex and piquant notes of the curry will keep you coming back for more. 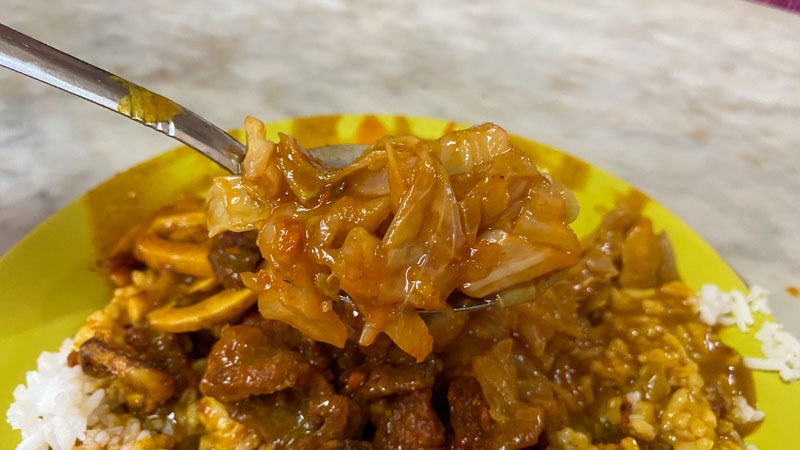 The curry is so good, you can have it with plain rice alone. But to make it even better, have some of these goodies to accompany your curry rice. The Braised Cabbage is a classic with Hainanese curry rice and this one has been braised so long that it was practically falling apart.

Still immensely flavourful, this complemented the curry-drenched rice and you’ll want to finish your vegetables. 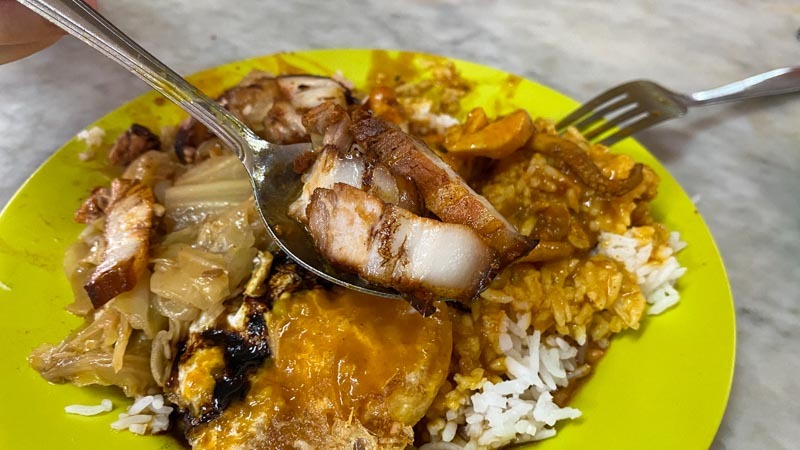 If you are at Beo Crescent Hainanese Curry Rice, then one of the items you can’t miss has to be the thick, luscious cuts of Braised Pork. With sizeable slabs of pork with a more than ideal fat to meat ratio (more fat!), this one is a little unforgettable.

Practically gleaming under the florescent lights of Beo Crescent Hainanese Curry Rice, these tender slabs make all the calories in the world worth it. This was a little bit of wild card for, but seeing as many hungry patrons before also opted for the Braised Squid, I gave it a shot. Now, squid tends to be one of the most finicky proteins to work with. Cook it a smidge longer, and these tender rings would turn rubbery.

Not a pleasant experience, let me assure you. These from Beo Crescent Hainanese Curry Rice exceeded my expectations by ten-fold. Soft and succulent, these were restaurant quality for sure. The pièce de résistance of Beo Crescent Hainanese Curry is not only in their curry rice but these. These brick-red Crispy Pork rashers are one of the best I’ve had. Crispy to a fault without being greasy, it almost had the texture of biscuits.

Not to mention, these were undeniably tasty. I was scouring my plate for the last of these morsels. 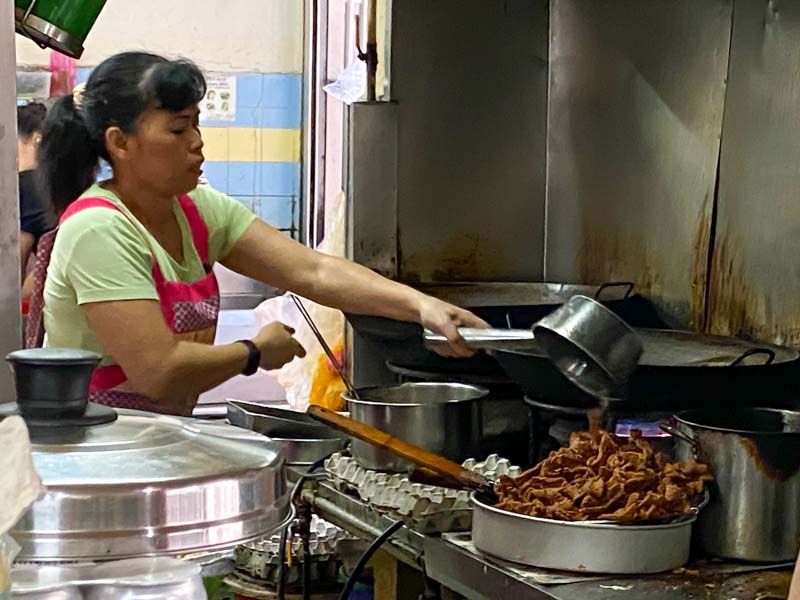 The reason they are so delightfully crunchy has to be the fact that they are chosen from the fatties cut of pork (that’s how you get them to really crisp up) and fried twice. I watched longingly as a fresh batch of Crispy Pork was loaded onto a tray and thought about how I could go for another plate. 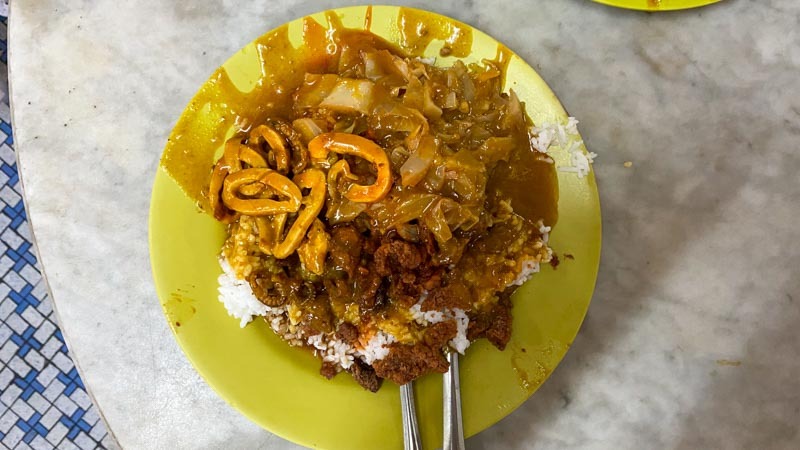 Beo Crescent Hainanese Rice truly hits the spot. It’s no wonder they have snaking queues for this gem, come lunchtime. At its affordable price point and delicious wares, this one has my vote (and my calories).

If you’re looking to get a taste of this luscious curry and crispy pork, why not dabao a packet or two home for you and your family to share? It’ll still taste divine.

Operating Hours: 7am - 3pm (Thurs to Tues), Closed on Wed

Operating Hours: 7am - 3pm (Thurs to Tues), Closed on Wed