As a brief introduction to those unacquainted with Binjai Brew, it started when three friends started brewing beer in their university pantry, but soon after had to shut down its operation due to campus regulations. Ten months after, these three entrepreneurial men decided to pursue their brewing dream and bring their special blend to the masses. 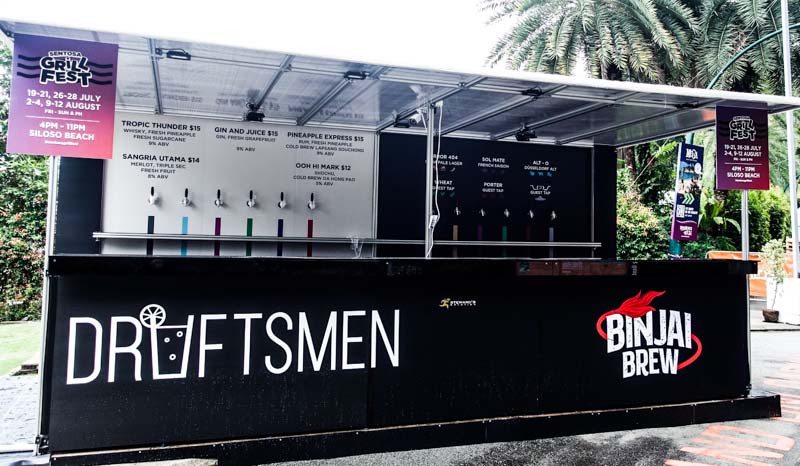 I met with the first of the trio, Rahul, and we got right into exchanging greetings and making small talk over university culture. Rahul asked if I wanted to cool off from walking in the sweltering heat and brought me over to his retreat in the dark and extremely private cold room.

I had an insider look into the workings of the cold room and got naturally inquisitive about how it all came to work. It obviously took a lot of effort getting to where they are but it was all part of the fun he tells me. We sat for a while and Rahul told me a funny story of how it all almost fell apart the night before their first day.

How Their Story Brewed 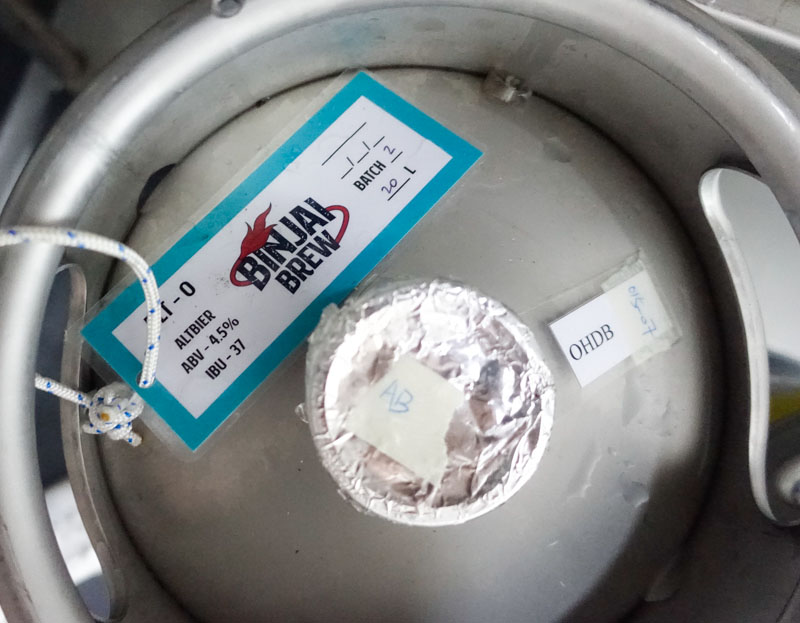 Heetesh soon arrived and we had a calm walk on the beach, spending time positioning editorial shots for the article. Soon after, we settled for a spot under the palm trees and introduced the controversial beginnings of the Binjai Brew story.

Rahul opened by narrating his stint for an overseas internship over the summer at a brewery. His area of operations during the internship did not actually concern the actual beer brewing process, but his curiosity made him learn about it anyway. When he got back to Singapore, his friends and now fellow co-founders Abilash and Heetesh asked if it was difficult to actually brew beer and decided to give it a shot as sort of a passion project. When they were pleased with a batch that they brewed, the trio distributed it to fellow students. The beer was well-liked and one recipe is now a permanent option in their beer line-up, that being the French Saison. The trio pushed on to pursue the project for fun, not knowing that it would lead them all to do it full-time today.

Soon after, word-of-mouth got around about their operations and the hall authorities found out about it. They were forced to stop brewing with immediate effect, but not without a story for the NTU newsletter ‘The Nanyang Chronicle’.

The story caught on and soon appeared in bigger publications like The Straits Times. The public’s reaction to the story and encouragement from friends pushed them to take it on as a full-time entrepreneurial venture. The trio undertook a four-month period of research on how to legitimise their brand and settled on a contract brewery. There were big ideas, but the challenge lay in the logistics.

Binjai Brew finally debuted their brand in December 2018 in front of friends and families at a public event in conjunction with American Taproom. The name of their establishment pays homage to the controversial beginnings of their brand. They have given Binjai Brew a personality, one that is progressive and very much present for civil discussions of societal issues within Singapore. Being A Voice For The Community

Binjai Brew started as an e-commerce site designed to reach consumers via a delivery service. But given that the trio had always involved themselves with the conversation of socio-cultural issues in Singapore but their online presence alone was not enough. They missed seeing peoples’ reactions, which was the motivation for what got them started in the first place.

Naturally, the group turned to events as a way to promote their product to consumers directly. Appearing at events like Pinkfest 2019 and Books And Beer 2019, Binjai Brew has never once shied away from making their stand known when it comes to controversial social issues. Rahul chimes in, saying that beer has a natural effect of making people talk, and they want to redirect this energy into engaging people to have civil discussions regarding pressing social issues. Heetesh admits that it might not have the mass appeal of a general beer brand, but that is what they want to stand for — being more than just a brand, but also a personality with a voice within the industry. Binjai Brew does not lean on any extremes but just plays medium to some of the most important discussions in our society.

Moving forward, the recent First-Class Honour graduates are more motivated than ever. There are plans to add a sustainable beer item, with research being done on how to process leftover, unsold bread and create beer. They were also interested in the idea of using fruit peels from cocktail bars to flavour their brew. Abilash and Rahul’s background in majoring in Chemistry gives them an added advantage in imagining the endless possibilities for innovation regarding the development of their beers. 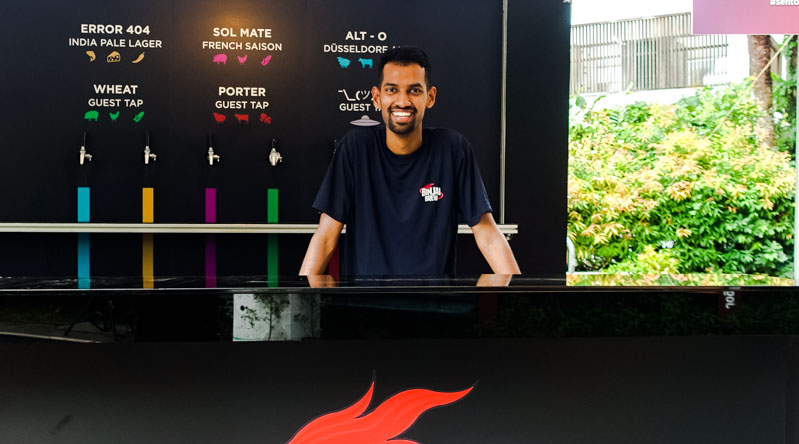 The trio are currently more invested in having their own space, a taproom for legal distribution of their beer, allowing them to manage their brand face-to-face with customers that walk in. It’s everybody’s lofty college frat dream to own their own bar, but these guys are well on their way to making it happen.

Heetesh jokes about using the space for hosting underground parties and private events but that was exactly when it hit me. We are more alike than different. Their wacky, carefree personalities and beliefs overlap with most of mine. They’re just a couple of Singaporeans that came out of the system wanting to do good. It just happens that they really like beer too. Rahul poured me a cup of every type of brewed beer to try, and that was when I had the full Binjai Brew experience.

The Proof Is In The Taste

The first pour was an Indian Pale Lager called Error 404 (S$10). Probably inciting that it is unique, ‘Error 404’ actually means that it is an unknown page in the server, in internet terms. The brew combines both characteristics of the Indian Pale Ale and Lager for a complex combination of light, yet flavourful profile that goes down really smooth. The second pour was its Düsseldorf Altbier (S$10). Hailing from a city in Germany with the same name, this bronze pale ale brew is characterised by hints of caramel and a subtle hoppiness. It had a lot more body, giving it that thick and creamy mouthfeel. It is definitely suited for people who enjoy a darker brand of beer. 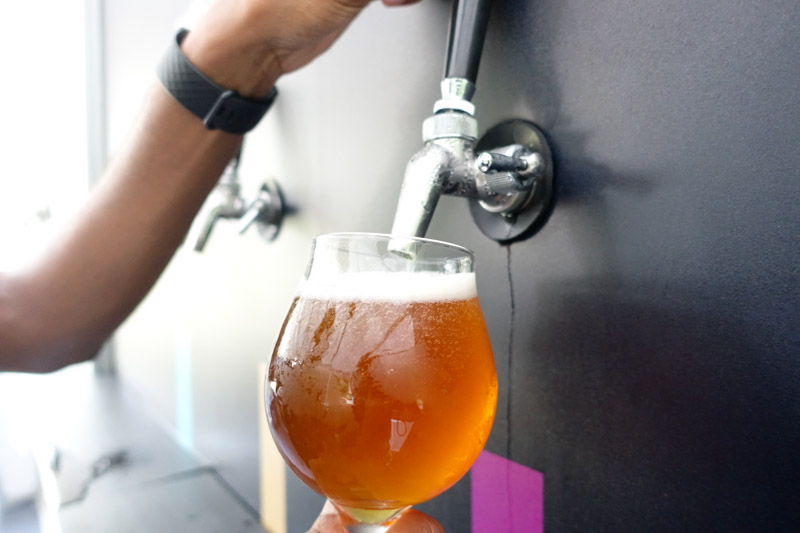 The last pour was the French Saison (S$10). This was the first beer the trio experimented with while they were still brewing it in their university hall. The group wanted to brew a beer that tasted familiar to Singaporeans, so they made this one for their friends. Similar to ‘Error 404’ but with a dry finish, it was the perfect beer to end off our meeting.

Binjai Brew deserves the most out of the ‘support local’ tag. The people behind the brand are extremely capable and are just now getting started. We cannot wait to see how it is when they’ve finally moved to own a taproom themselves. Here’s hoping for an invitation to their private parties! You can order the Binjai Brew beers here for yourselves to have a try of these truly local brews.