Who makes the best burgers? The creepy clown decked out in red and yellow? Hell no! Not by a long shot. Gourmet burgers are great with their fancy combination of ingredients. But, for all the furore about making America great again, maybe, just maybe, Burger Joint had it all figured out.

At Burger Joint it’s about the good ol’ fashioned American-style burger, everything else is secondary — for me at least.

Flavour, or as those Americans spell it, “flavor” is the most important thing about the burger — and food in general. Not some pompous over the top fairy dust nonsense. Food should be about quality produce, put together in good taste. That’s what the original Burger Joint New York in the Park Meridian Hotel does, and it’s what the one in Singapore does as well.

The Burger With The Works

There are a few variants of meat between two buns on the menu. Some catering to the local palate, while others add on to the quantity of meat and other ingredients. However, I had my eyes, heart and gut locked on the bacon cheeseburger ($19.80) with the works. Opting for “the works” doesn’t cost you anything more, it’s free! The works refers to having everything from lettuce, tomato, onions, pickles, mustard, and ketchup — you get it.

Could I rave about some vegetables (and fruit) and condiments? You best believe I can, because compared to so many other burgers I’ve had in Singapore, this one felt right.

The bacon cheeseburger isn’t revolutionary doesn’t do anything new but, it does everything well.

Fresh tomato, lettuce, onion, etc… are laid on in the right amounts. The iceberg lettuce snaps with a crisp freshness, the tomato is sweet, thick and juicy and the best part — it’s fresh. There’s something great about fresh quality produce that’s treated with love.

No limp soggy lettuce, tomato, onion or anything else for that matter. The strips of bacon are like little meaty snaps. More crisp and caramelised than the sort we’ll usually find in Singapore, this is bacon that’s cured specially for Burger Joint.

Meat is flown in from Nebraska, U.S.A in order to create the original flavour of Burger Joint in New York. The in-house butcher then transforms the meat into five ounce patties (they’re yuge, trust me). The patties aren’t seasoned — at all. The flavour of the beef complemented with all the other elements of the burger provide more than enough flavour.

The best part? You’ll get to choose how well you want your patty done.

At medium-rare, stacked and layered with all the other elements sandwiched between two toasty buns, the bacon cheeseburger is bliss and joy. Hand-held, unadulterated joy. If you aren’t singing the star spangled banner by the time you’re done with your burger, try some liquid courage. A selection of 18 craft beers on tap and an impressive selection of bourbon and whiskey.

Boozy milkshakes ($15.80) make drinking more fun than it already is. Choosing to spike my milkshake with Baileys is a decision I’d recommend almost anyone should make. Baileys isn’t going to send you sky high but, it adds nice flavour that lingers.

I’m pretty indifferent when it comes to fries ($5.50) but, if I had to give my opinion about the fries at Burger Joint — they’re good. They didn’t get soggy and stale even though we took our time working through the brown paper bag full of the chopped up spuds. 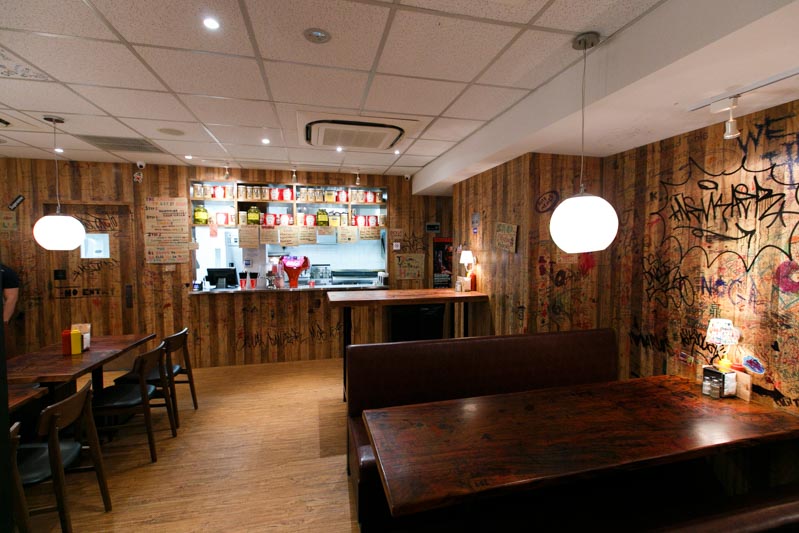 For all those wondering about the ambiance and feel of the place, fret not, I didn’t forget. I just had to talk about the burger first. The folks that brought Burger Joint to the tropics haven’t deviated much from the original Burger Joint in New York. They’ve followed everything, down to the menus fashioned using cardboard and magic markers and allowing customers to express their artistic talent by doodling on walls and even the ceiling.

The burgers are brilliantly engineered, I’m able to hold it confidently using one hand (I don’t have particularly large hands), without the whole burger falling apart.

Compared to other burgers I’ve had in Singapore, the bacon cheeseburger with the works at Burger Joint trumps them all (pun so intended). It’s great, it really is. The burger is juicy and fresh, with all the elements working in harmony and the beefy flavour of the unseasoned patty is allowed to shine through.

Will I be eating at Burger Joint regularly? Probably not. Because let’s face it, not many of us are going to spend $20++ on a meal that often, then again I could be mistaken. I’m no baller. However, if you’re looking for a great burger in an unpretentious setting, Burger Joint is where it’s at.

Previous articleKipposhi: Have A Bowl Of Blue Ramen In Tokyo To Chase Away The Monday Blues
Next articleHonestbee: Singapore’s Grocery Delivery Service Is Venturing Into Food Delivery Early 2017