I know halloween is fast approaching when Facebook reminds me that four years ago I dressed up as the ‘Queen of Hearts’ to celebrate the holiday. By “dressed up” I mean I wore a crown and stuck hearts all over my t-shirt.

I was also the third ‘Queen of Hearts’ out partying that night.

For fear of repeating such a halloween faux pas (i.e unoriginal idea to the max), I’ve decided to go all out and DIY eight halloween costume ideas I’ve had brewing over the past year. Better yet, they’re all centered around one of our favourite Singaporean pastimes: FOOD. And asian food at that.

I implore you to approach this post with as much of an imagination as possible.

8. Sunny Side Egg with Soy Sauce

I’m sure we’re not going to be short of egg inspired costumes this year (gudetama anyone?) but I’ve decided that a bit of local flavour is needed to level up this classic. This costume is super easy to make and all you’re going to need are: 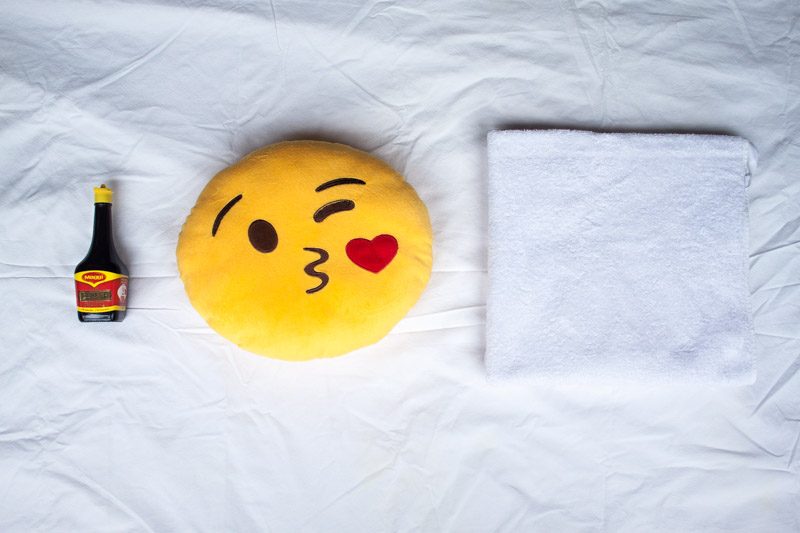 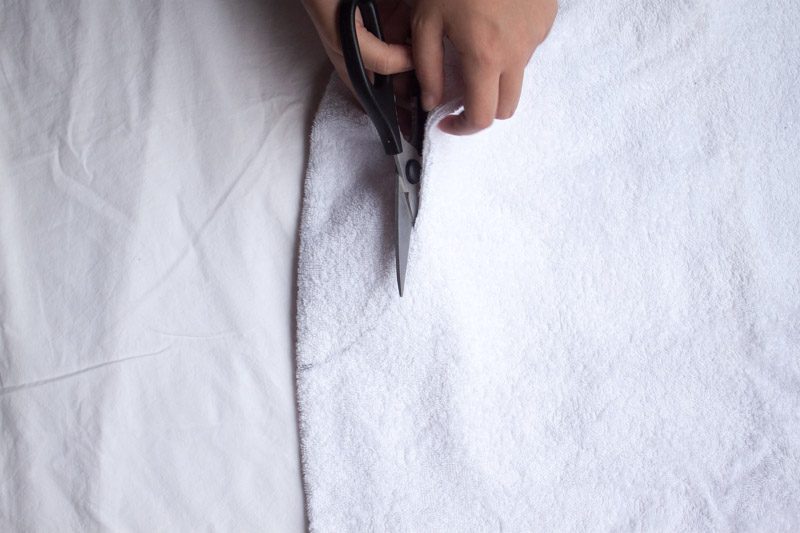 Fold the towel in half and use a pen to mark out a semi circle that’s big enough for your head. Cut out the semi circle. Basically, do what you gotta do to get the towel over your head like a poncho.

Sew or pin (depending on how much you love your pillow) to the tummy area of the now-towel-poncho and make sure it’s secure. Wear a white long sleeve t-shirt inside for extra egg white appeal. 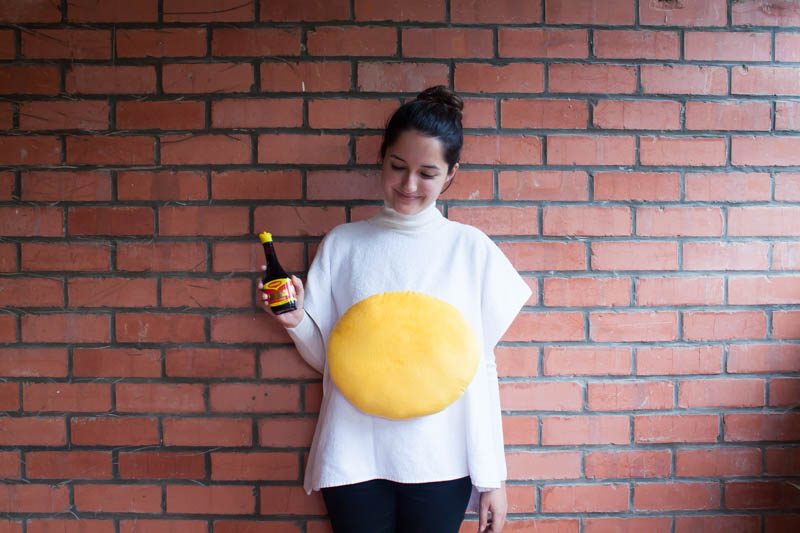 Hold your chosen bottle of asian seasoning and TA-DA! You are now an egg. Just make sure you put the emoji cushion the right way around, unless you’re going for the kissy-face-egg look.

Soft-boiled eggs and soy sauce made me immediately think of… kaya toast. Mmmm. But how does one truly become a kaya toast? Toast. Butter. Kaya. Here’s what you’re going to need: 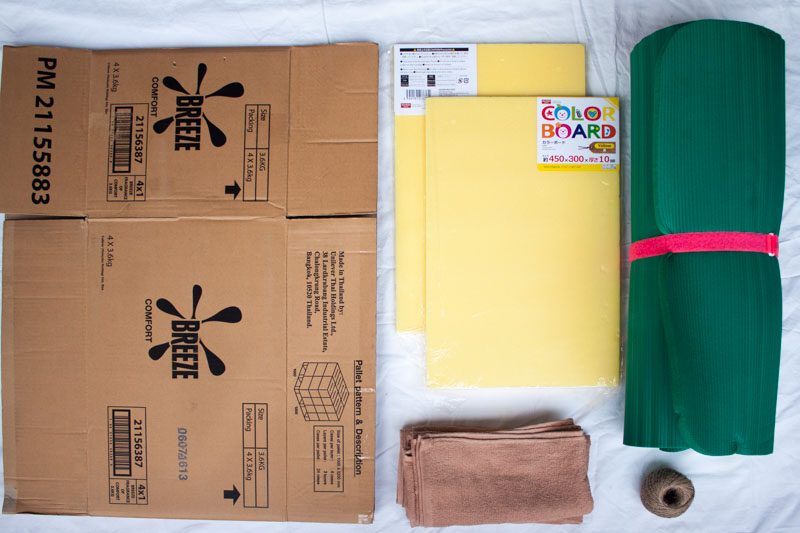 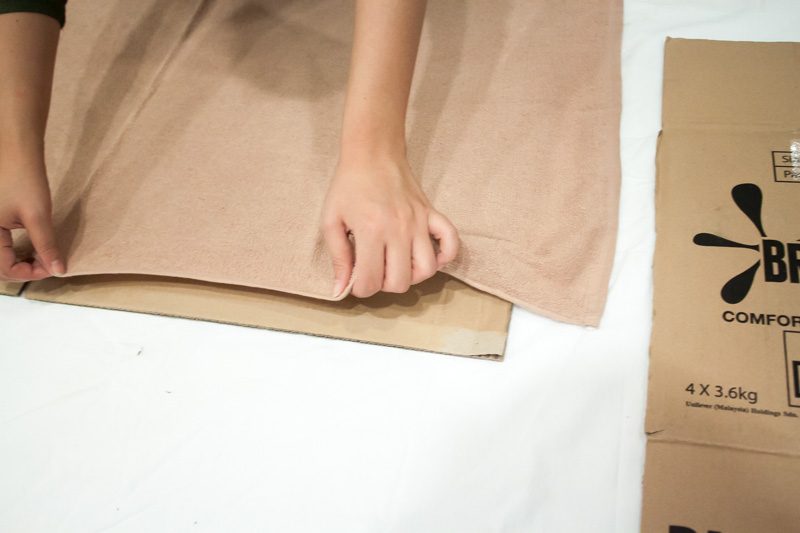 Flatten the cardboard box and cut it into two halves. Drape one brown towel over each half and secure it with staples. The towel is meant to give your outfit the true texture of toast (revolutionary, I know).

Secure the yellow boards to the top bit of the cardboard box, letting just a few inches peek out and look like butter. Wear a green top and carry the boards over you by attaching with twine.

Wrap a green yoga mat around you if you like your toast with extra extra kaya. 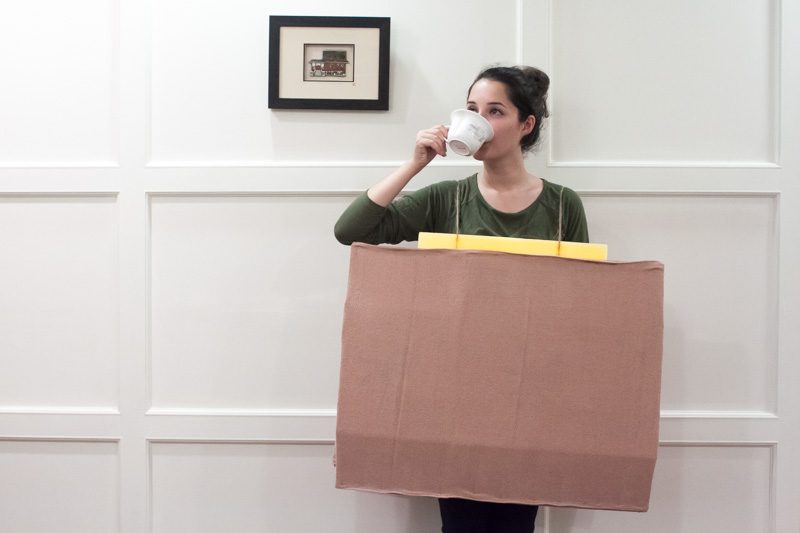 There you have it folks. Ya Kun would be proud…I hope.

Since we’re on the topic of breakfast, I must admit I’ve always wondered what it would be like to be a bowl of mee rebus. Is that not normal? This made a lot more sense in my head and may take a bit of imagination but here’s what you’d need: 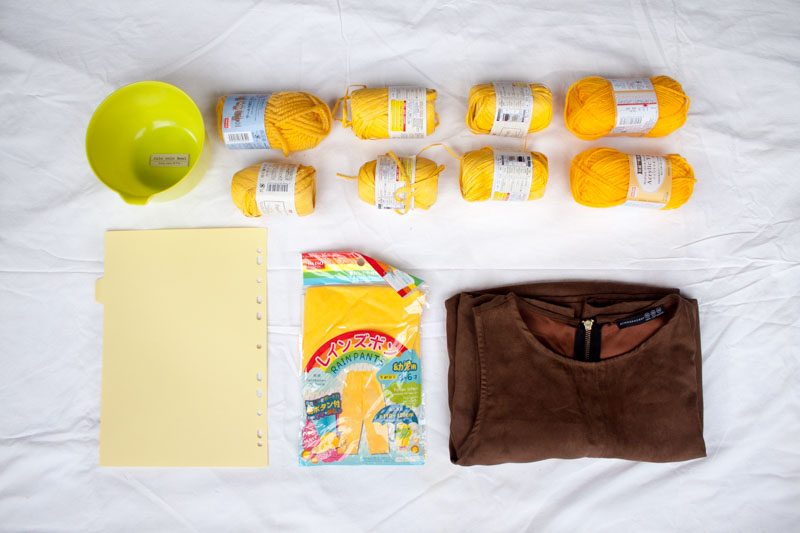 Wear said brown outfit and yellow pants. Go CRAZY with draping the yellow yarn all over yourself. Cut out a circle from the yellow paper and attach it to the green bowl so that you can make… a lime. 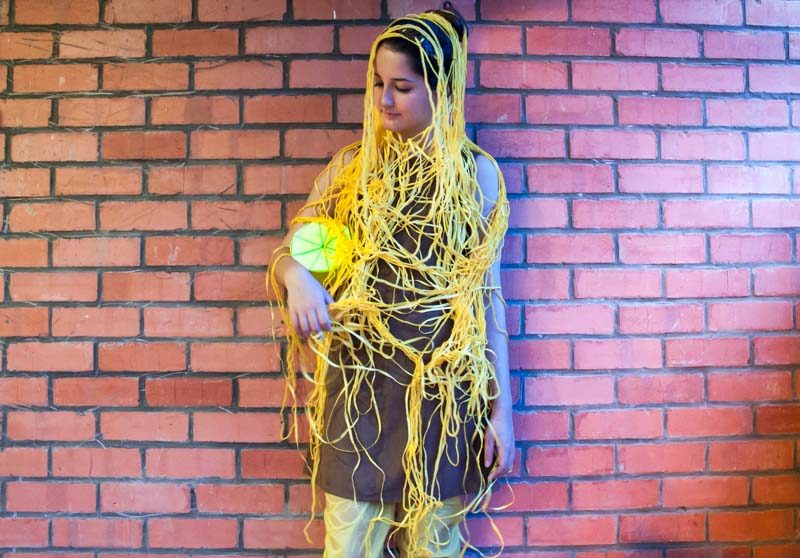 I must say, I’m actually quite proud of myself for this one. You can even go a step further and paper mache half an egg to really become mee rebus. The great thing about this outfit idea is that it’s super versatile: mee siam, bee hoon, laksa… the possibilities are endless.

Sushi definitely isn’t local but it’d be a shame not to add it to this list. I dressed up as sushi last year and found the outfit to be a hit! Here’s what you’re going to need to become a salmon sashimi nigiri: 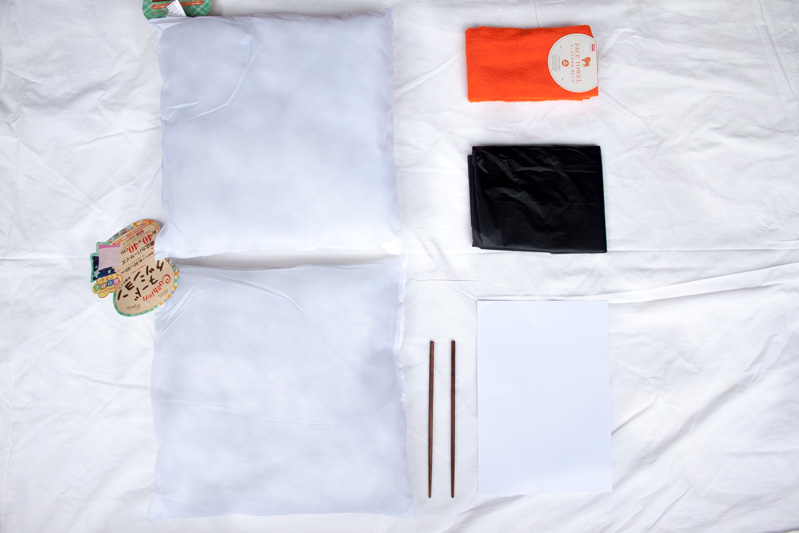 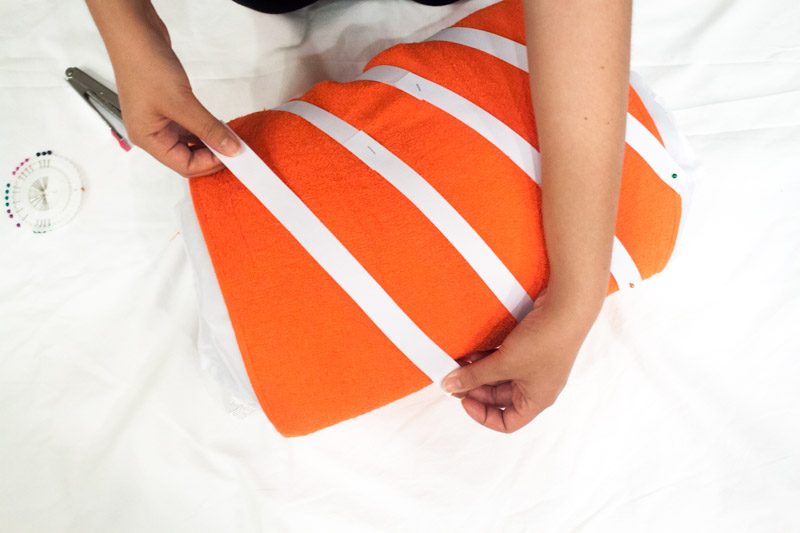 Secure the orange towel over the cushions and make sure it is in a rectangular-ish shape, you know, like a nigiri. Cut out long strips from white paper and attach it diagonally to give the impression of the salmon sashimi fat.

Attach the whole thing to your back with a belt so it won’t move around easily. Use the trash bag to cover the belt and middle portion of your homemade sushi as seen in the photo. This is the seaweed! 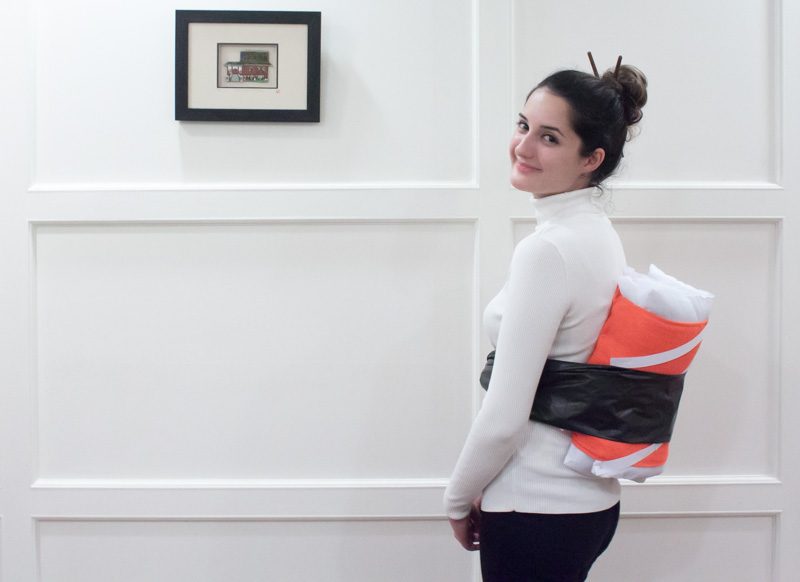 Wear a white top and black pants and find a way to get two chopsticks into your hair to complete the look.

The best part? You and your friends can all dress up as sushi and go as a PLATTER. Sa-bo (sabotage) someone to go as a bottle of soy sauce.

This probably wasn’t the brightest of my ideas but it would sure make for a good laugh. Surprisingly enough, Daiso sells sticks (??) and so I thought I could transform myself into satay. Here is literally all you need: 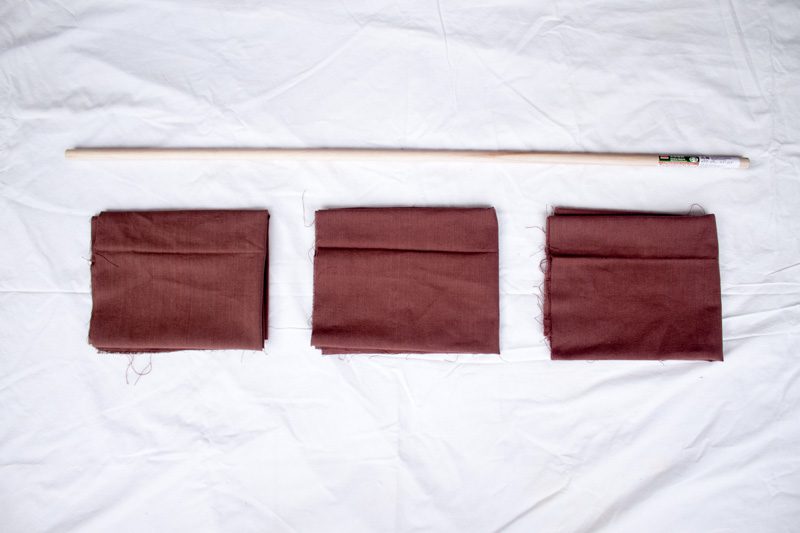 Then get someone to wrap wrap wrap you with the brown cloth. Mobility may or may not be severely decreased. 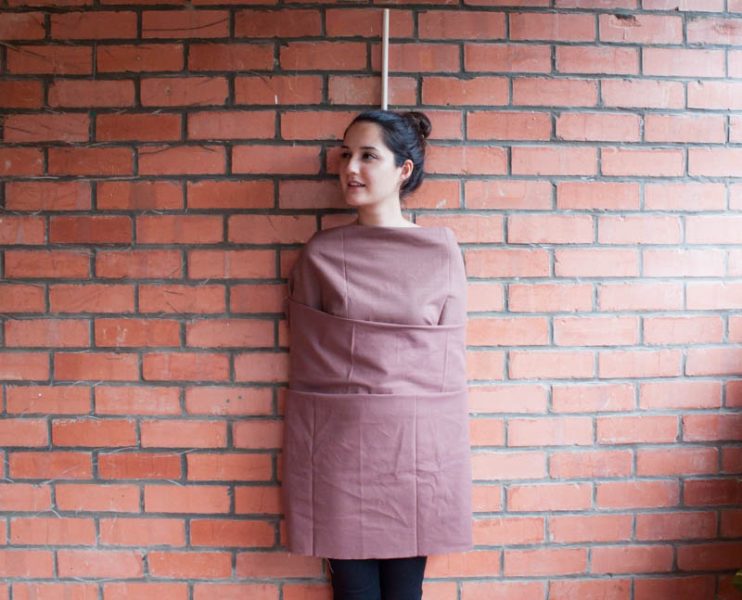 But look! With a bit of imagination, you are now a satay. Or a yakitori. Or a kebab. Once again, the possibilities are endless. Just make sure you have a friend to help you out.

And that friend helping you with your satay outfit could go as ketupat! I know right, brilliant. You’re going to need: 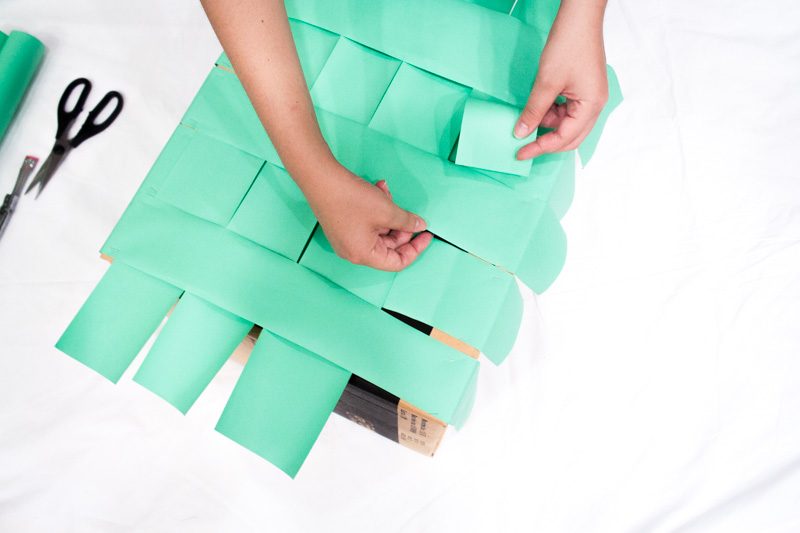 Set up the box in its full box form and work your way around the sides. Cut up the green paper into strips and staple them to the box in one direction first.

Make sure to only staple the ends. Next, weave more strips of paper from the other direction, like you would a ketupat. Customise the design whichever way you like.

Don’t forget to cut out two extra long strips for that signature ketupat tail! Attach the whole thing to yourself by using the twine and drape the shiny shiny stuff all around you for that extra attention grabbing detail. 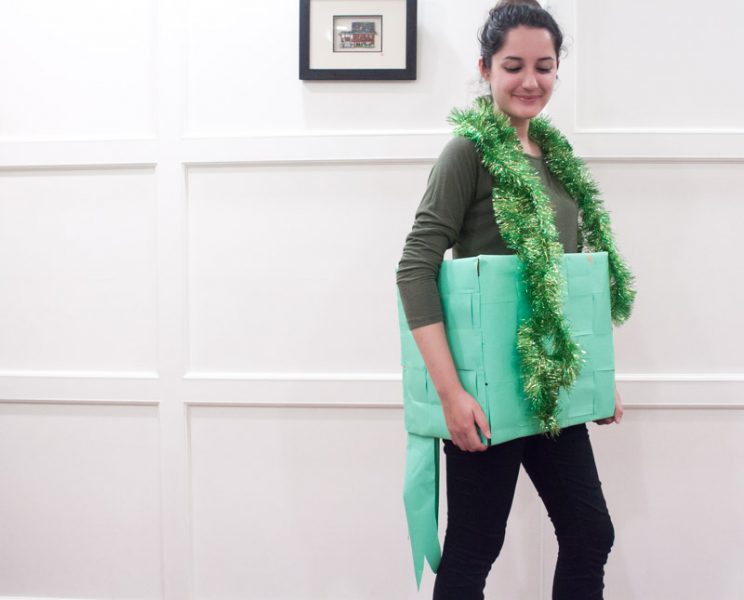 Proudly walk with your satay friend and be the mascots Lau Pa Sat never knew they needed.

I really really wanted to be a tau sar pau but it’s a little hard to DIY a whole bun cushion thing and I don’t want to put you through that. So then I thought along the dim sum route and it hit me… SIEW MAI. You don’t actually need many things for this. 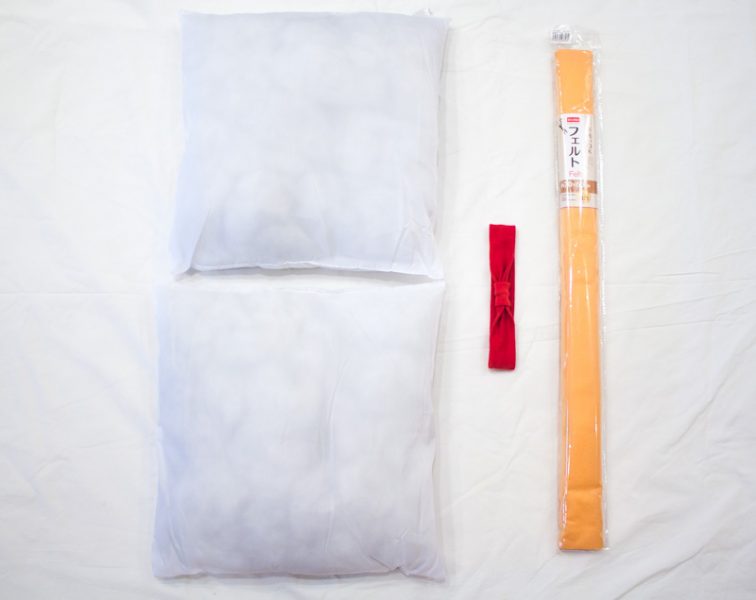 Just imagine the crinkled texture of a siew mai skin and use a stapler to replicate that by pinching bits here and there. Strap the two pillows to yourself, front and back, using a belt and wrap the crinkled yellow felt around you.

Add a red headband to act as the red garnish you see on top a siew mai. 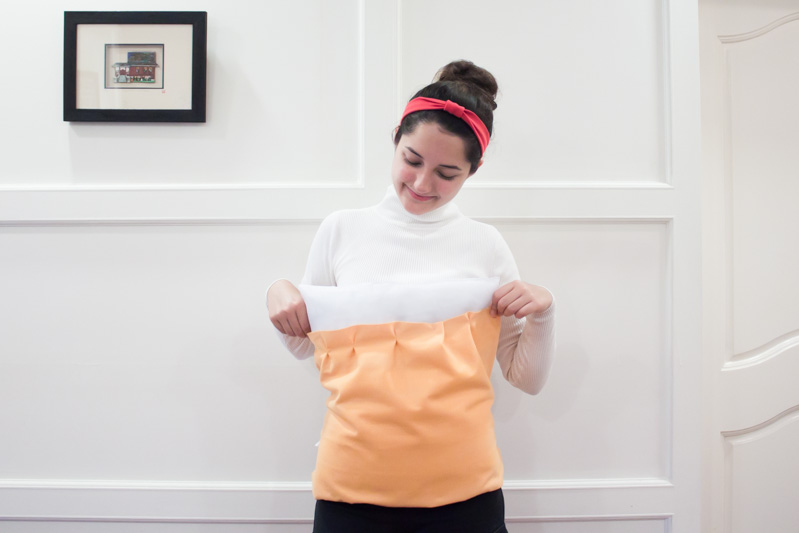 You dim sum and you lose some but this is definitely a winner.

Okay so maybe bubble tea isn’t exactly food but it’s surely asian and the pearls (or bubbles) might as well be a carb substitute given its high starch content. But I digress.

I was so excited that I had the perfect dress to recreate a milk tea bubble tea. You can obviously choose to be your favourite flavour, so just customise the dress/ outfit colour accordingly. Here’s what you need: 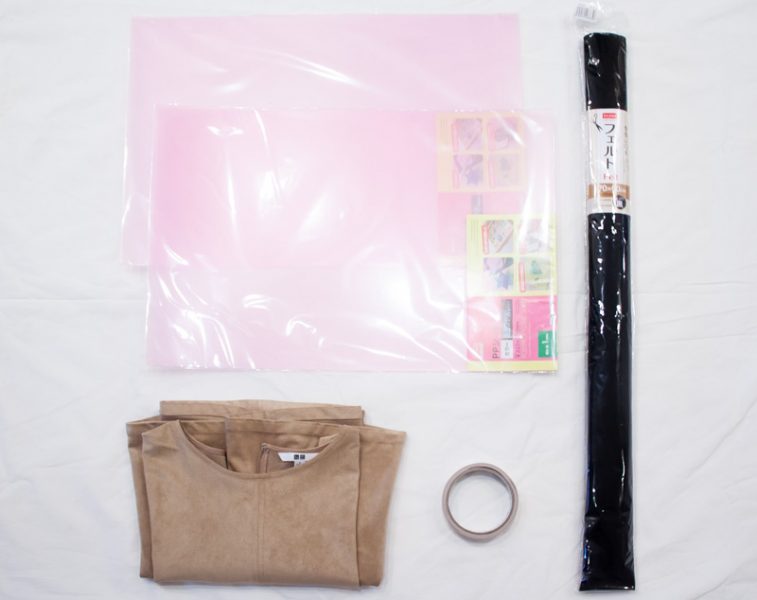 Use a small bowl to mark out circles on the black felt. Cut these out and attach to the bottom of your outfit using double sided tape.

Roll the fun-coloured polypropylene sheets and assemble into a straw-like structure. Look cute. 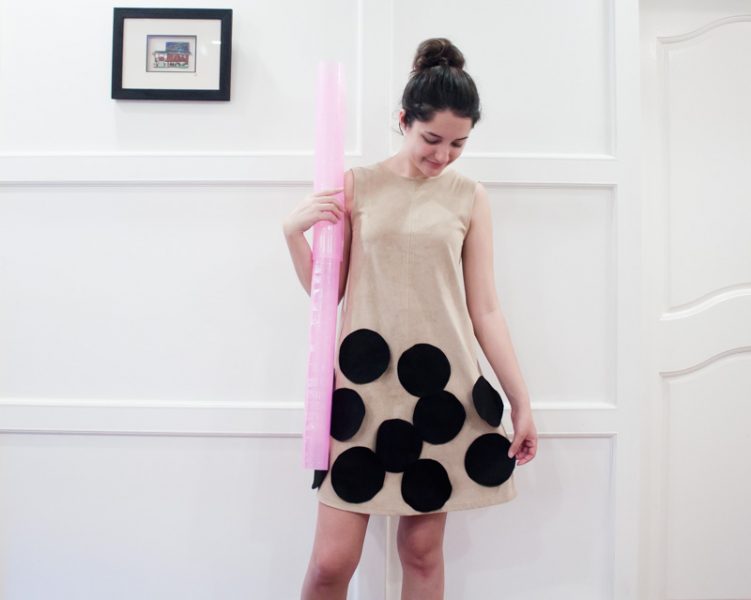 You can definitely build on this idea and take it to new levels by cutting out different kinds of toppings, using different kinds of felt. If you’re a Gong Cha fan, pair up with a Koi fan and let the battle of the bubble tea begin.

If only my 2012 self could see me now. If you’re struggling with ideas for a halloween costume, just try to start taking note of what you’re eating and draw some inspiration from there.

I’d give an arm to see someone dressed as a sambal stingray going trick or treating. Happy Halloween!