Fans of the local YouTuber Xinde Yap and Model Brandon Loh will know that they’ve combined forces and opened the brainchild that they call, Chug Chug. 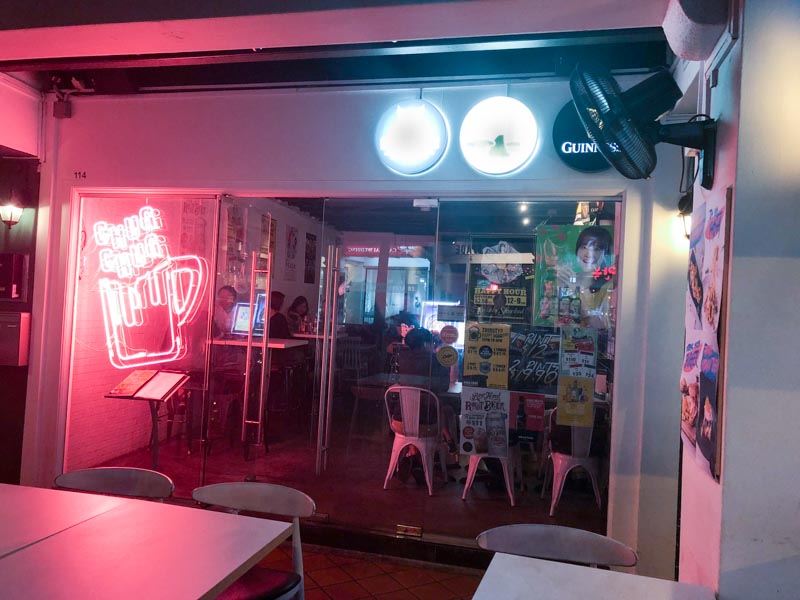 Located along Tanjong Pagar Road, Chug Chug is a bistro serving pastas, burgers and almost any kind of alcohol, from soju to alcoholic root beers.

When I sat down with Xinde for a chat, he told me that Chug Chug was set out to be a place to chill, where people can come together to have fun and bond.

A celebrity, chef and entrepreneur all rolled into one, Xinde Yap cooks at the bistro six days a week. So there isn’t any of that gimmicky stuff where a celebrity only owns the restaurant in name but is a no-show. “You know that feeling of familiarity and comfort when you come home? Yeah, I wanted Chug Chug to have those vibes and to just be a very comfortable place that people can call their second home”, Xinde added with a warm chuckle.

Did they succeed in doing so? Well, with how friendly the owners themselves are towards their customers, I was definitely put at ease despite it being my first visit there. (Spot Brandon in the picture above!) Xinde also told me that some of their regular customers have even become friends. 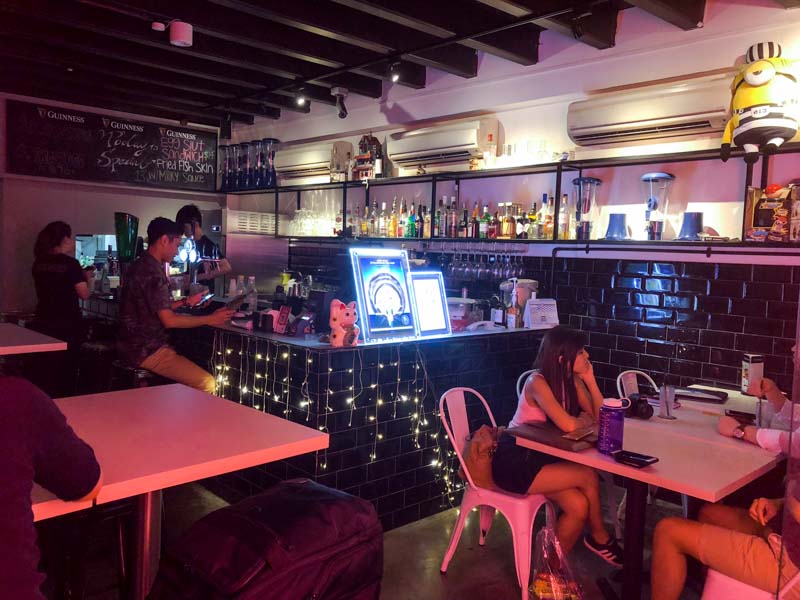 The interior of the place is a little small but I guess it’s all part of the cosy get-up. They have more seating areas on the second floor too, to accommodate bigger groups. First, to sooth our growling stomachs were the Fried Milky Mushrooms ($13). Drenched in milk dressing and tossed in fried curry leaves and chilli padi, this was just as sinful as it sounds. 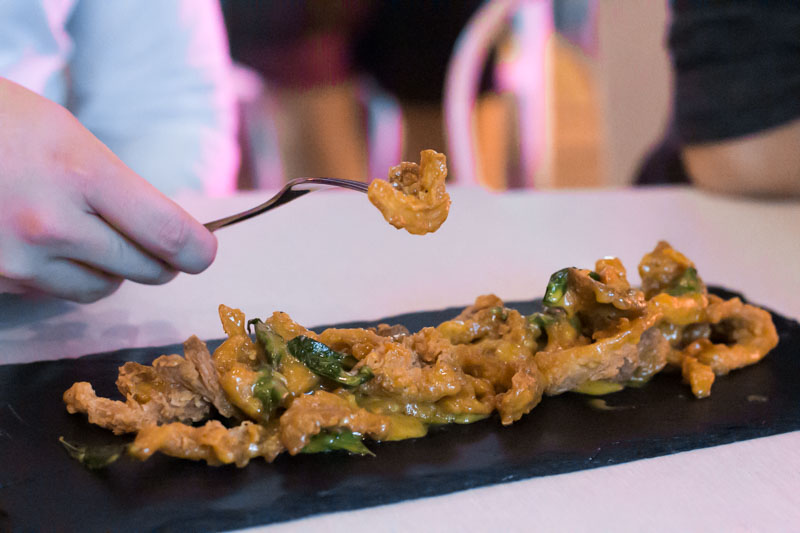 The creamy curry milk sauce coated the mushrooms in a way that allowed you to get a burst of flavour with each bite, but without making them soggy. Overall a great starter, but you might want to split it with two or three others because it can get pretty heavy. 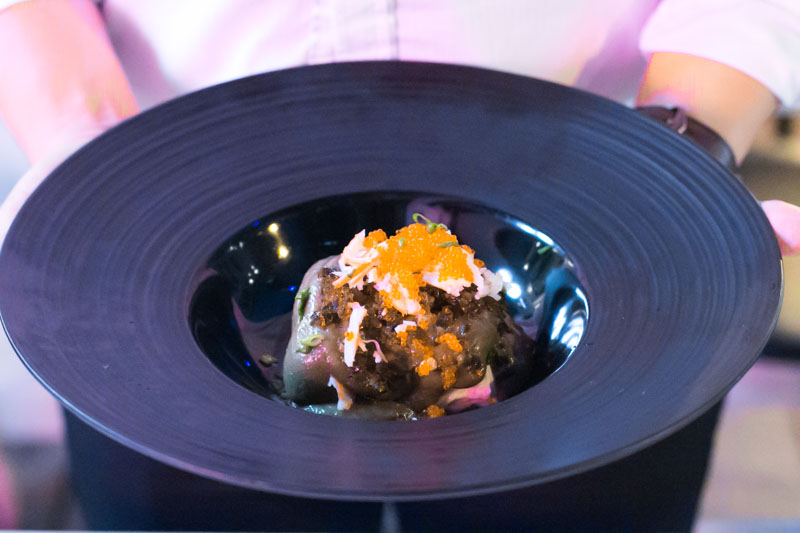 Next up, we were served the Japanese Pidan Tofu ($12), where pidan is Mandarin for century eggs. To enlighten you on where the century eggs come into play, this is actually silken tofu topped with creamy century egg sauce, shredded crab meat, tobiko, and negi. The dark, sesame-looking sauce might not look that great at first, but don’t judge a sauce by its colour because this was absolutely delicious!

We were a little sceptical about the pidan initially but soon found that the creamy, savoury blend actually worked really well with the otherwise bland tofu. Some sugar is added for a subtle hint of sweetness in the dish, ensuring that the egg sauce isn’t too cloying nor overpowering. 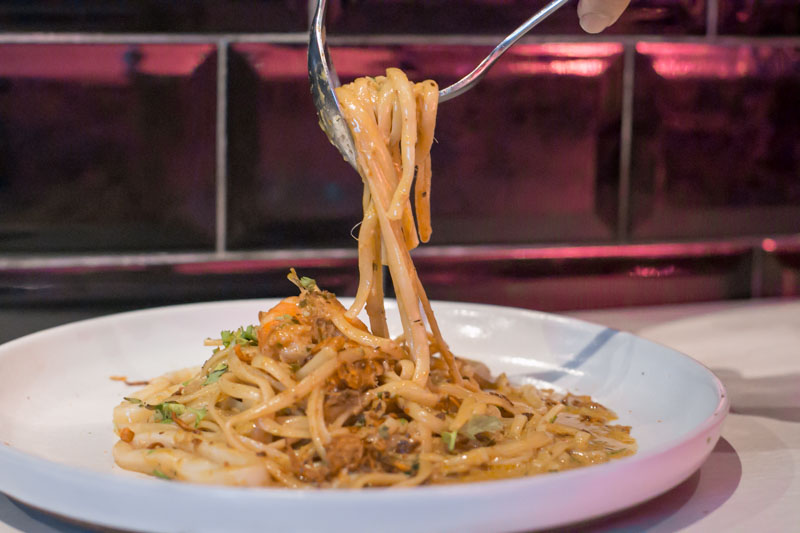 Of course, we had to have a go at Chug Chug’s main attraction, the Chug’s Tom Yam Pasta ($16). Tom Yum pasta is so rampant now, and I wasn’t really expecting this one to be any different.

But unlike its other counterparts, the Chug’s Tom Yum boasted a strong tangy Tom Yum flavour without being excessively creamy. Even my colleague who doesn’t like seafood couldn’t resist a one or two more mouthfuls. 10/10 would order again. The Chug’s Prime Beef Burger ($18) was served to us on a huge and heavy platter board, and was almost too big for the table (we had to shift a couple of things around to accommodate this!). 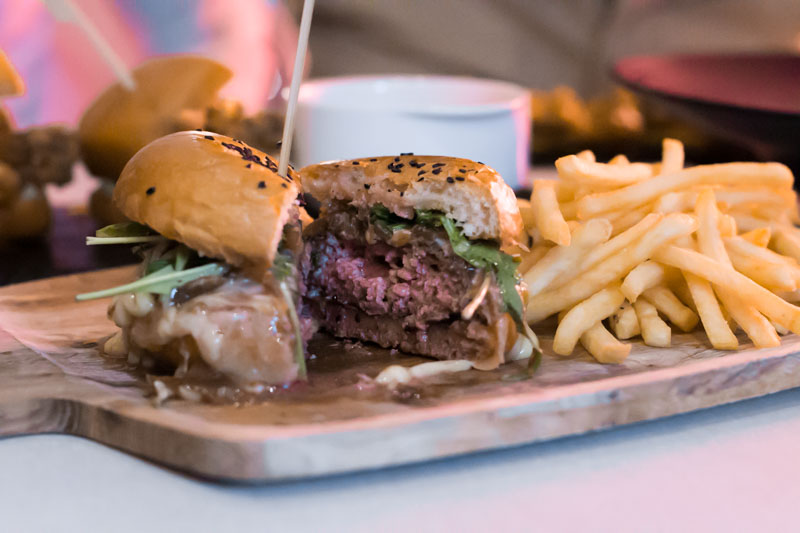 There were echoes of “ooo”s when the burger was sliced open as we watched its juices spill over onto the plate. With a thin strip of pink running down the middle, you can tell that the beef patty was cooked to a perfect medium rare.

Although it’s not stated in the menu, we detected hints of truffle that elevated the dish as a whole. But despite the juicy patty, I still think $18 is a little pricey for just burger and fries.

The following two dishes (featured below) are currently not available on the menu yet because they’re still in their experimental phase. However, they’re available upon request. 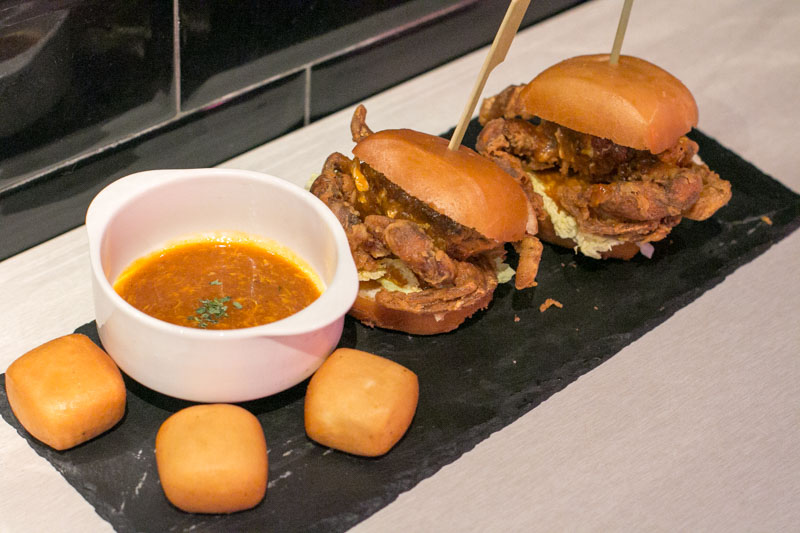 We were served the Chili Crab Mantou ($18) that came with two soft shell crab sliders flanked by mantou buns, and some chilli crab sauce on the side. This was basically Xinde’s take on the famous must-try Chilli Crab dish that you always treat your foreign friends to. “I created this because now you can enjoy your Chili Crab without dirtying your hands and having to fuss over crabs shells”, said Xinde when asked about the inspiration behind this dish.

The whole dish was very light because of the airy mantou buns and crispy soft shell crab. The sauce that came on the side was more sweet than spicy though, and seemed rather little considering it was meant to be a dip. It would definitely be better if they could add just one more scoop of chilli crab sauce to go with it. 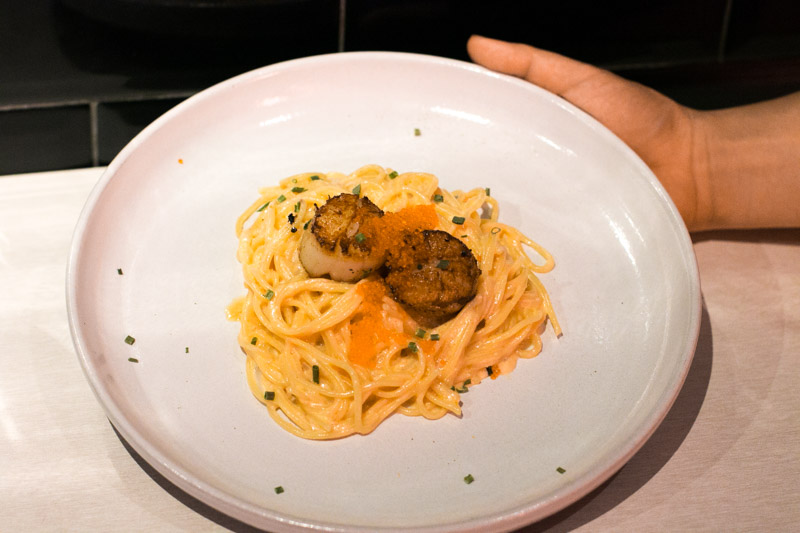 I found this dish from Chug Chug’s Instagram and was wishing really hard that it would be served to us during the tasting. I guess I realised dreams do come true when Brandon came over with the Scallops Mentaiko Pasta ($20) in his hand. The flavour was just as heavenly as I had expected, and the creaminess of the Mentaiko paired with the big, juicy scallops superbly. I usually get jelak really quickly when eating cream pasta, but I downed almost the whole dish myself and was left wanting even more (I’m craving it again just writing about this).

Needless to say, this was crowned the winning dish of the night for me, although I was very torn between the two pasta dishes.

Surely Chug Chug wouldn’t have earned its name without their signature alcohol, and we ended off the night with some cheers. 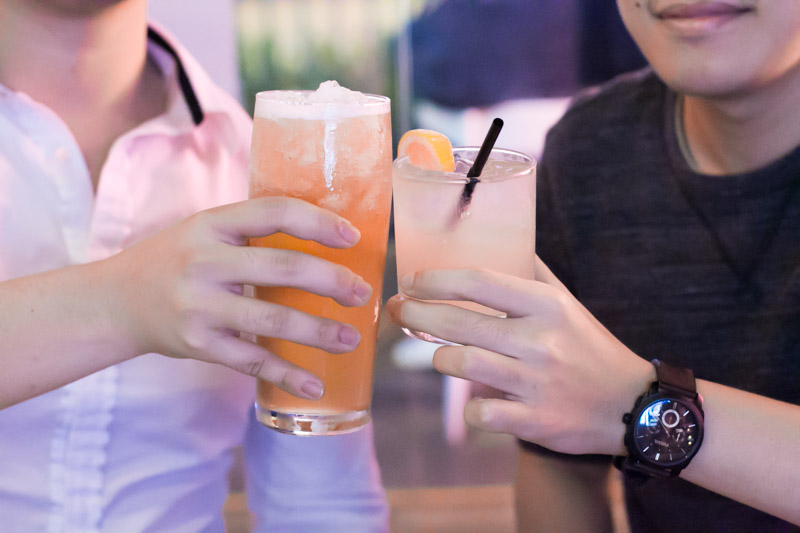 Pictured from left to right are the Chug Beer ($14) and Blood Orange ($18). The Chug Beer was a mix of beer, lychee liqueur and lemon juice, and certainly held true to its apt description: strong like a beer, sweet like a cider.

The Blood Orange was a combination of soju and liqueur but it wasn’t anything special to me. 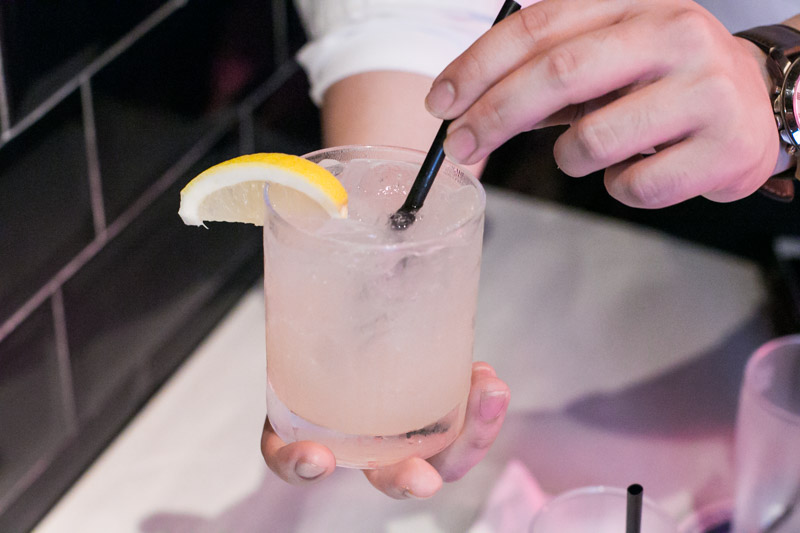 This looks a lot like the Blood Orange, but it’s actually the Yuzu Burst ($16), which consisted of vodka, yuzu, lychee liqueur and lemon juice.

While this might be a good choice if you’re looking for a refresher after your meal, I found the yuzu to be too overpowering. The moment I had my first sip, the sour yuzu flavour hit me like a truck (and not the good kind!). 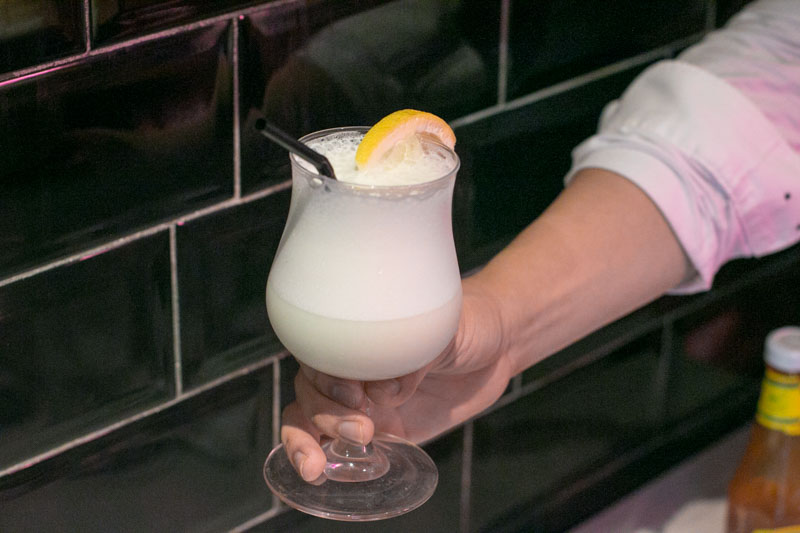 This last one’s the Forbidden Yoghurt ($18), which was soju mixed with milk, apple Sourz and lime juice. I don’t know what it was about this drink but it just didn’t work for me. Perhaps, the apple didn’t exactly sit well with the citrusy lime, making it a pretty strange combination altogether.

To put it simply, it tasted like a sour, alcoholic Milkis, so knock yourself out if that’s your thing.

Now, time for the part everyone probably clicked here for. Xinde very kindly sat down with me to answer a couple more questions that I had, and here they are: 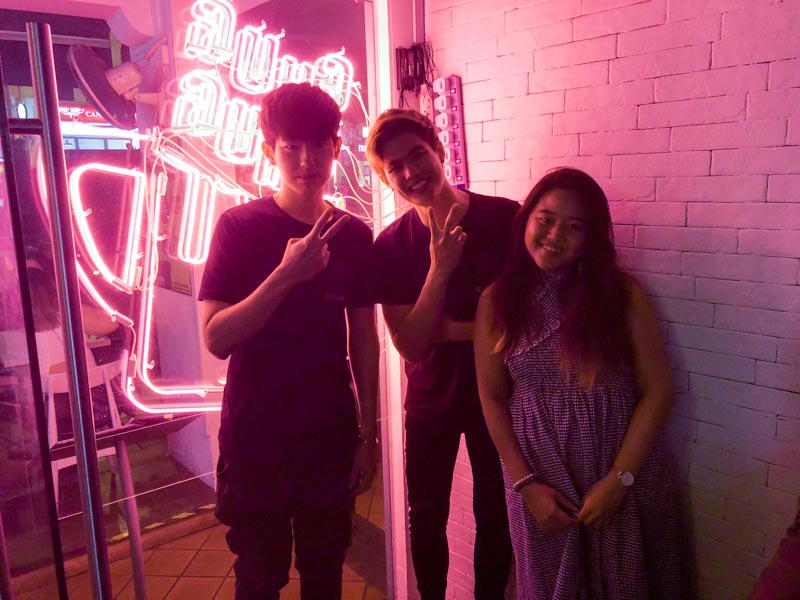 1. What made you want to start this with Brandon? And how did you guys meet?

I was born into an F&B environment because my parents own a Zi Char restaurant, but I wanted to veer away from Chinese cuisine. Hence, with Chug Chug, I’m able to marry the cuisine I want to do — Western and Chinese. I met Brandon via a mutual friend, and we hit off instantly. He’s the meticulous one and I’m the one who has fun in the kitchen, so we’re like yin and yang that balances out each other.

2. How do you cope with balancing managing a restaurant and media appearances?

Chug Chug is open from Monday to Saturday, so I have Sunday as a free day. I’m thankful that Dee Kosh very kindly schedules me for Sunday shoots to accommodate my schedule, so I’m still able to make it.

3. Speaking of Dee Kosh, does he drop by often to show his support?

Dee Kosh is a super busy man, and he barely has enough time for his meals sometimes, so he doesn’t really come by. He definitely shows me support through other means though. But Ben, also on Dee Kosh’s team, hangs out here very often, and I always welcome him with open arms.

I used to hang out at another bar, and we’d always be chugging drinks. I remember it being a lot of fun, and I just want everyone who comes here to have as much fun as I did. I tell them, there’s a reason why I called it ‘Chug Chug’ and not ‘Sip Sip’.

5. Do fans patronise Chug Chug just to see you?

Yeah I do get fans, mostly fangirls, who come in and ask for photos and whatnot. But they’re very polite and will not disturb me if they see that I’m working. Usually, they’ll just be eating and will stop me for a photo when I’m walking past.

6. What’s the weirdest fan encounter you’ve ever had here?

I don’t think I’ve experienced anything particularly weird but there was once, a fan who was in her thirties came charging straight to the kitchen. She looked at me through the window and said, “hi, I came here just for you”. I was so shocked I didn’t know what to say, except to thank her.

7. Where do you see this business going in 5 years’ time?

I plan on taking this business regionally, and I foresee perhaps outlets overseas in future. There have been very supportive people in the Philippines, so that might just be our first destination. But for now, I’d just like to focus on bettering the current business first before I start expanding.