‘Chinese food’ is quite a rather diverse umbrella of culinary styles ranging from your homely Cantonese comfort food to the hard-hitting spice-forward Sichuan mala bowls. While classic ‘Chinese’ in the 90s meant Cantonese fare a la Crystal Jade, mainland Chinese styles have exploded into the scene in recent years.

If you’re a fan of these flavours, you might want to pay a visit to Ding Tele, one of the stalwarts of Shanghainese cuisine in Singapore, known for making a mean sheng jian bao (生煎包). While their dainty, pale-skinned cousin xiao long bao hogs all the limelight, true bao lovers know the incredibly underrated deliciousness of sheng jian bao. The difference is in their method of preparation, which allows sheng jian bao to offer a whole other dimension. The dumplings are fried in a flat pan shallowly filled with oil with their bottoms in contact with the sizzling oil, ensuring a golden-brown crust only on the bottom, while the top is kept soft and chewy. And to many people, Ding Tele’s sheng jian bao is supposedly listed as one of the best and most authentic. So how did it fare?

This wasn’t my first rodeo at Ding Tele, this nondescript eatery at Kovan located beside popular joints such as Thai Yaowarat Kway Chap and Lola’s Cafe has been a place I frequented once upon a time for their no-frills approach to food. 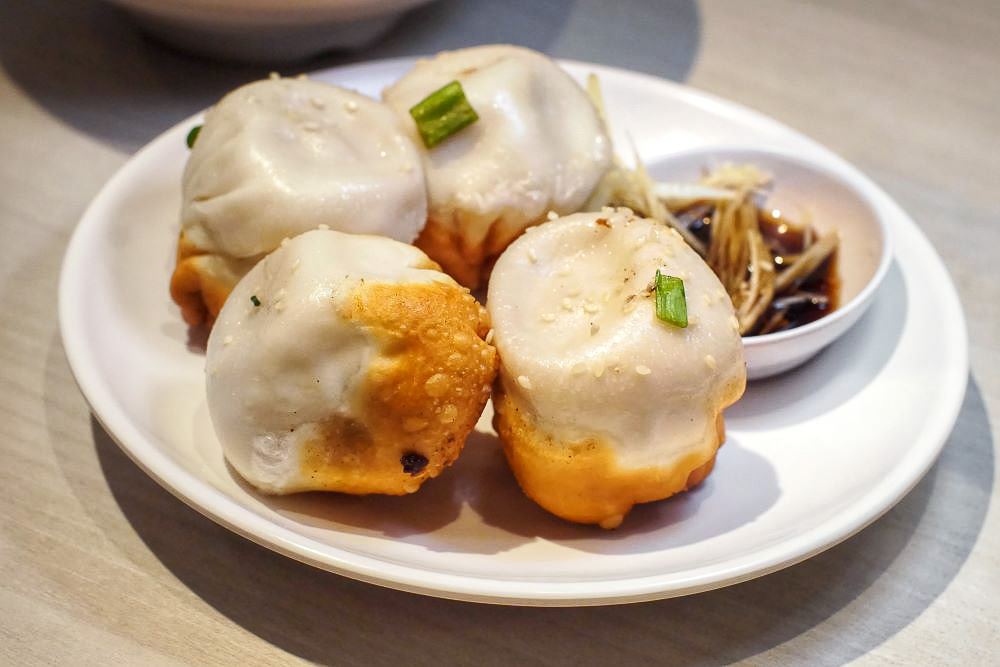 It’s been more than a year since my last patronage and I went in with expectant tastebuds hoping to get a taste of those crispy parcels of sweet soupy decadence. They say absence makes the heart grow fonder and well, my heart was about to burst.

Needless to say, the first item I beelined for was Ding Tele’s Signature Pan-Fried Crispy Pork Soup Bun (S$5.40), aka sheng jian bao. My heart was thumping right as the plate of goodies landed on our table with a thump—it’s like reuniting with your high school sweetheart. But much like reuniting with your high school sweetheart, the reality often falls dreadfully short of expectations. Gone were the days where they carefully straddled between an immaculate juxtaposition of crackling base and delicate top—it was a rather disappointing shell of its former self.

Yes, the crust still retains crispy but only barely and those silky white folds were sorely lacking in any form of delicacy, which was instead substituted with a surprising thickness and ardent chew that detracted from the overall dish. That said, the pork soup was still the sweet, heartening self after all this time. Needless to say, if we were ordering Shanghainese dim sum, there’s no way we go without the most iconic of all—Signature Steamed Pork Buns (S$5.40). Ding Tele’s xiao long bao fell even flatter than the sheng jian bao just by virtue of the absence of a golden-brown crust.

Instead of bits of crunch helping to alleviate the monotony of unsolicited thick chewiness, it was just a boring chore to power your molars through it all. Rolling out excessively thick skin on a xiao long bao is simply a war crime but as I said before, the pork soup still leaves a pleasant impression in my mouth, helping to soften the blow a little. In contrast to the first two items to hit the table though, the Oriental Wonton with Black Vinegar and Chilli Oil (S$7.20) was a pleasant surprise for something I’ve never ordered before at Ding Tele. Granted it’s still not quite a delicate film of skin but the chew here was much more forgiving.

More importantly, it’s the magical concoction of tang and heat that really hit home, scratching the itch as good as any place could, including my favourite Zhong Guo La Mian Xiao Long at Chinatown Complex. Miraculously, another old favourite of mine survived the precarious plummet in standards—the stripped-down but scrumptious Noodles With Soy & Scallion Oil (S$5.30). Sure, S$5.30 for the seemingly diminutive list of ingredients may seem a tad ridiculous but the gist is that this is probably the best accompanying carbs to go with your hearty dim sum feast.

If you come to Ding Tele, you’re definitely going to indulge your senses in ordering a metric ton of dim sum goodies off their diverse menu. And let me tell you, that puts quite a heavy, greasy toll on your tummies. So, the simple but comforting blend of fragrance that drives the bowl of noodles is just enough to satisfy your inherent desire for traditional carbs without crossing the line of surfeit. Admittedly, there was one item that I didn’t quite fancy but I assumed it’s because I’m not the biggest fan of the sticky textures on show in the Braised Glutinous Pork & Mushrooms Dumplings in Shanghai Style (S$4.80). It was fine taste-wise, but perhaps it’s the same flaw of chewy skin that accentuates the sickly chew of glutinous rice which I could not buy into.

Simply put, Ding Tele isn’t what it once was. Once held in high regard, but it seems Singapore’s sheng jian bao experts have lost their lustre. Granted, I’ve had good experiences in the past so I’m uncertain if this was a one-time disappointment—still not the greatest of signs.

However, if you’re really hankering for a good ol’ taste of Shanghainese street food, the foodies on the internet don’t have many more popular recommendations than this spot. It’s worth a visit for the curious.

Previous articleNemesis Bar, Duxton Hill: “If the Lasagna could speak, it would’ve charmed the socks off the whole room”
Next articleITE College West requires the support of the public as students are away on HBL Mahmud’s Tandoor, Online: “A bold marriage that produces the most splendorous...