The streets of Chinatown are filled with a plethora of Chinese street food vendors, prominently stalls selling paus, mantous and fried pancakes. Dough Magic, however, stands out from the crowd due to its large menu of items, featuring both fried and steamed products. When I visited Dough Magic, a takeaway stall outside People’s Park Complex, I was intrigued to see their range of interesting and diverse mantou and pau flavours proudly displayed on their storefront, with flavours like matcha, black sesame, black sugar and sweet potato. Even more enticing were the colourful mantous resting in their steamers, boasting a vibrant array of purple, green and brown shades. An adjacent side of Dough Magic’s stall contained fried products within a glass casing. Each golden brown fried pancake was illuminated by bright yellow lights within the display case. 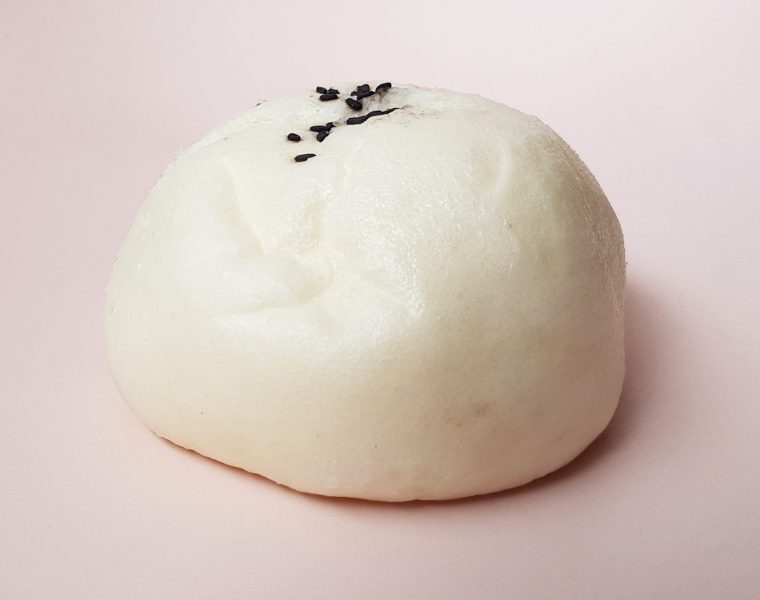 The Dough Magic product that caught my attention the most was the Black Sesame Paste Pau (S$1.50). As a huge black sesame lover, I was attracted to the generous black sesame fillings shown in the display image. When I cut the pau open, the amount of fillings did not disappoint. The fillings were really smooth and gao, and while I enjoyed the texture, I was a little let down by the misleading black sesame paste. With it being named a Black Sesame Paste Pau, I was looking forward to a pure black sesame experience, so while this pau is still rather tasty, I find that it should be renamed to better reflect the nature of the fillings. Next, I had Dough Magic’s Pork & Spring Onion Pau (S$1.50), which was rather large in size for its cheap price.

The pau texture was airy and bouncy with a glossy surface. It was quite different from other brands like Nam Kee Pau and Chin Sin Huan, which are denser and a little more cake-like in texture. The fillings were on the saltier side, though I found it a tad too salty. The pork was chewy and meaty, which I was surprised by, given that many of the pork paus I’ve had were filled with more fat than actual meat.

However, the pau as a whole did taste pretty one-dimensional. For the size and amount of fillings, I do find this to be really affordable for only S$1.50, though as a pau contender on its own, it doesn’t stand out much. The mantou had a soft and fluffy texture, though the matcha taste wasn’t strong enough for my standards. It was light and more floral than rich. It did give the whole mantou a bit of a floral taste, but in general, it was quite mild. The red beans were soft and mushy and added sweetness to the mantou, but given how there were only a few pieces of red bean throughout the entire bun, most of it felt like I was eating a plain mantou.

I still liked the texture of Dough Magic’s mantou, and the slight floral taste from the matcha made it more fragrant than a plain mantou, but for me, in order to finish the whole thing, I would need to add my own spreads. As a matcha mantou on its own, it doesn’t really deliver. Finally, the last product I tried was the Beef Onion Pie (S$2.50), which was one of Dough Magic’s fried items. With a golden brown surface and delicious smell, this pie was certainly promising.

Unlike the Pork & Spring Onion Pau, which was filled with a substantial amount of meat, the Beef Onion Pie had a lot more fat as compared to beef. The pancake itself was rather thick and not as crispy as I was hoping, as it had a bit of a doughier texture similar to that of dense bread. Unfortunately, the pancake didn’t have much flavour on its own, despite it being fried.

The fillings were quite salty, adding a bit of flavour to the entire pie. However, as a whole, I found Dough Magic’s Beef Onion Pie to be one-dimensional too, and a little too doughy for my liking. I would have enjoyed it if it were crispier with perhaps a bit more sweetness to the filling. However, for the price point, it’s rather reasonable. While I didn’t have my mind blown by Dough Magic’s items, I did like how they provided me with quick, convenient and incredibly affordable Chinese street food while in Chinatown.

I wouldn’t travel down to Chinatown just for these, but if I were in the area, I would certainly drop by for a quick, cheap bite.

Burger & Lobster to resume operations at Jewel Changi Airport after...