You’d expect TANGS to only be a multi-storied department store. Turns out, the mall has been hiding this Peranakan cuisine restaurant on its top floor the whole time!

Given the unassuming entrance, you’d probably glance over it thinking Dulukala At Island was just another boutique store. As I stepped through, the entrance led into its elegant and chic interior. I immediately felt energised, by the soft daylight that illuminated the restaurant. 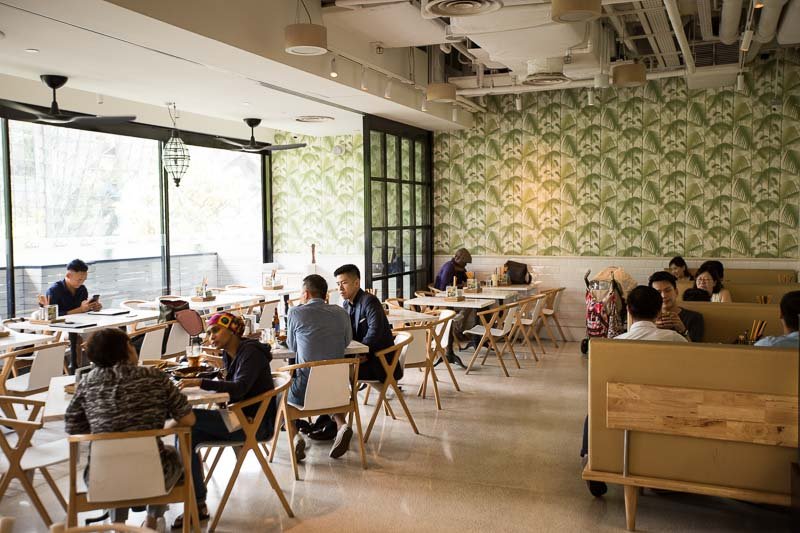 For a Peranakan restaurant, Dulukala At Island seemed rather modern and Westernised. The interior is pretty expansive, with an intimate outdoor lounge for a chill drinking session. You might want to just sprawl out on the sofa and pretend you’re on a vacation! 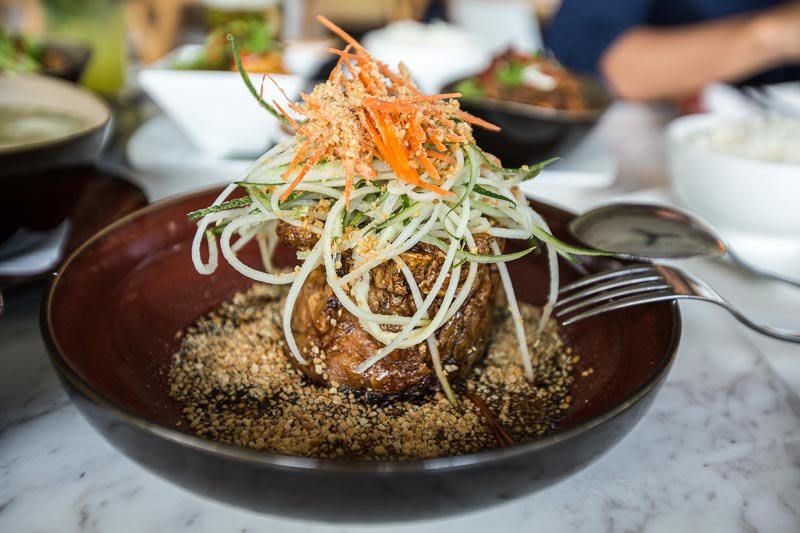 For those who are unfamiliar with the Peranakan cuisine, the Tauhu Telor ($12) is one of the more common dishes found in Indonesian restaurants.

The dish consists of a block of egg and tofu cake laid on a bed of Kecap Manis (Indonesian sweet soy sauce). 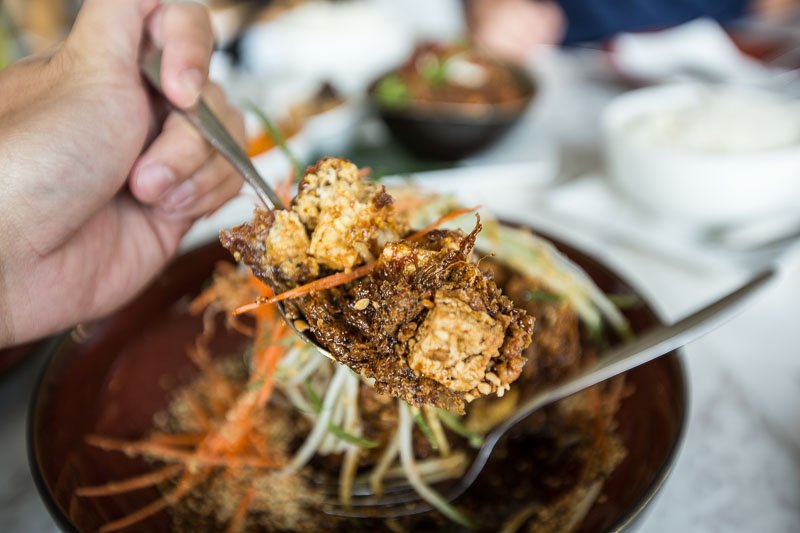 Taking a bite of the dish was a sensory experience. It started with a crunch, before giving way to soft tofu. But what really sold me was the Kecap Manis. It had just the right amount of sweetness, giving the plain tofu a boost in flavour. 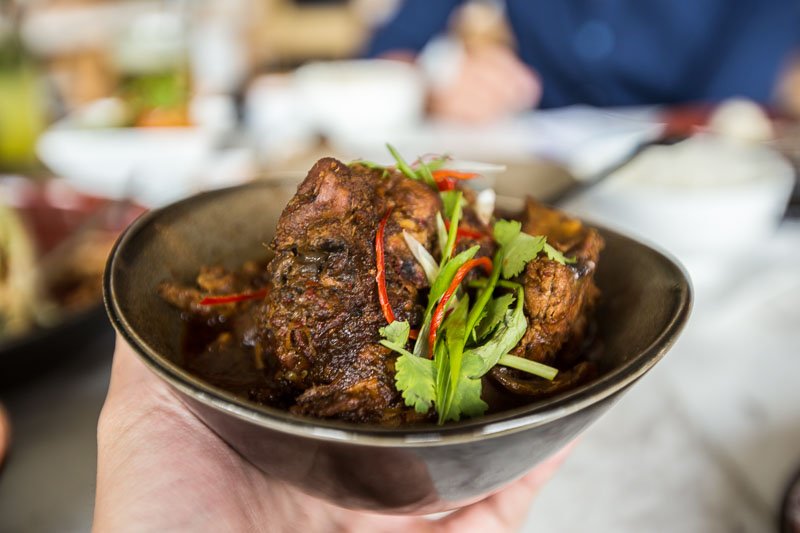 With the first dish already being such a showstopper, my expectations for the Ayam Buah Keluak ($21) were higher than ever. Made with chicken braised in a thick, spicy tamarind gravy with buah keluak nuts, this dish is a mainstay of Peranakan cuisine. 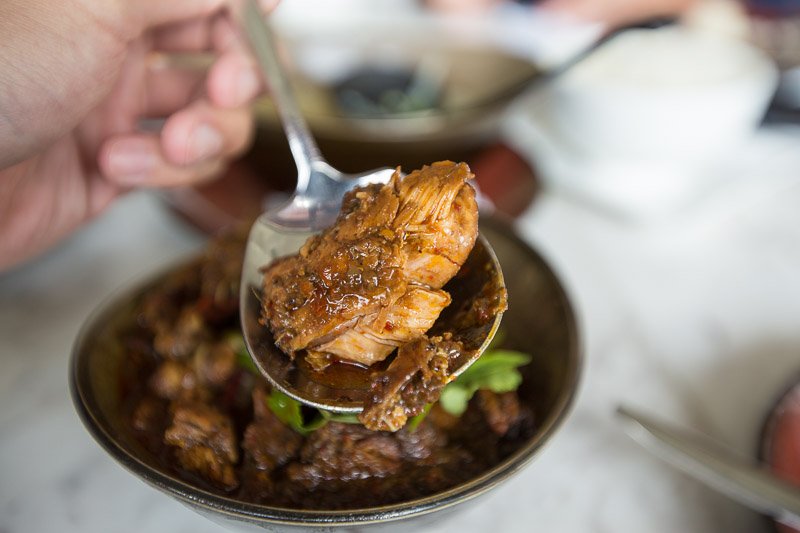 Although the portion was small, it was big on flavour. The chicken chunks were too tender to be even held up on a fork, and the flavours of the buah keluak seemed to have permeated throughout the meat. 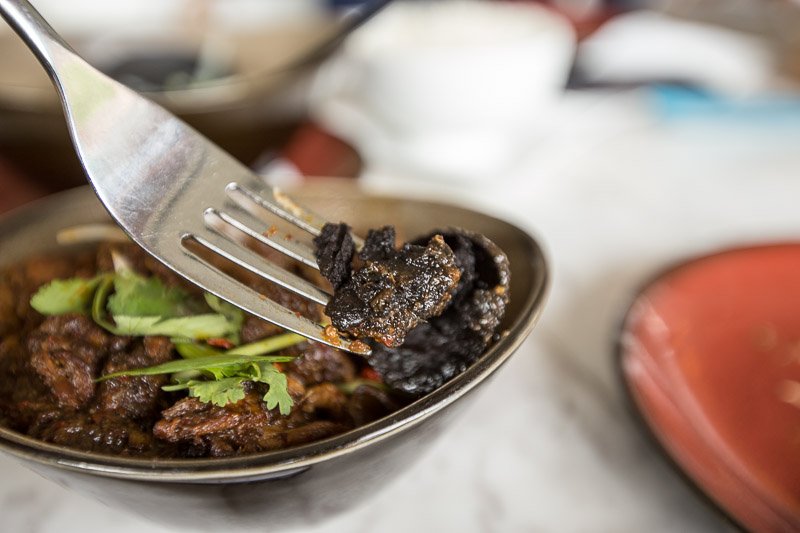 If you were wondering, yes, this black morsel is actually buah keluak. Tip: Mix it into your rice, it tastes a little like black beans with a mix of cacao, which was rather yummy.

The sauce had a rather good balance of spice and sweetness, and I quite enjoyed the subtle earthy bitterness from the buah keluak. We also tried the much-loved traditional Peranakan dish of Babi Pongteh ($18), which essentially is braised pork collar and belly in fermented soybean sauce with potatoes. 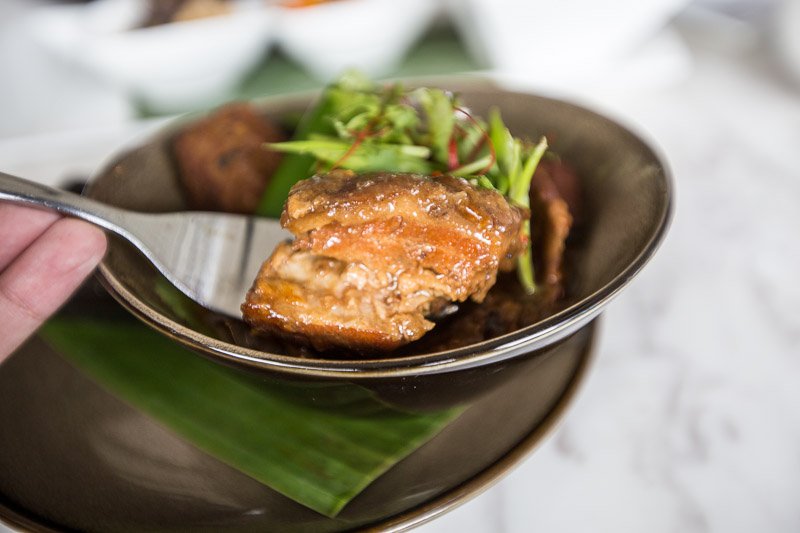 There’s honestly nothing quite as beautiful as a fatty slice of meat. Just look at how the fat glistened under the daylight! The meat was tender but not as soft as it could be. However, I liked that it was sweet and savoury from the sauce. 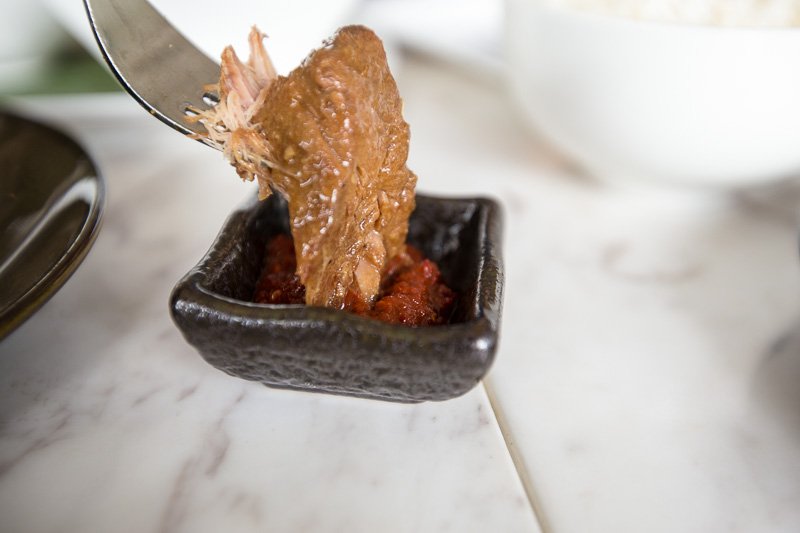 The dish also came with sambal belachan, which I recommend you try if you want an added kick of spice.

It won’t leave a burning sensation in your throat but it’ll be spicy enough to linger in the aftertaste. 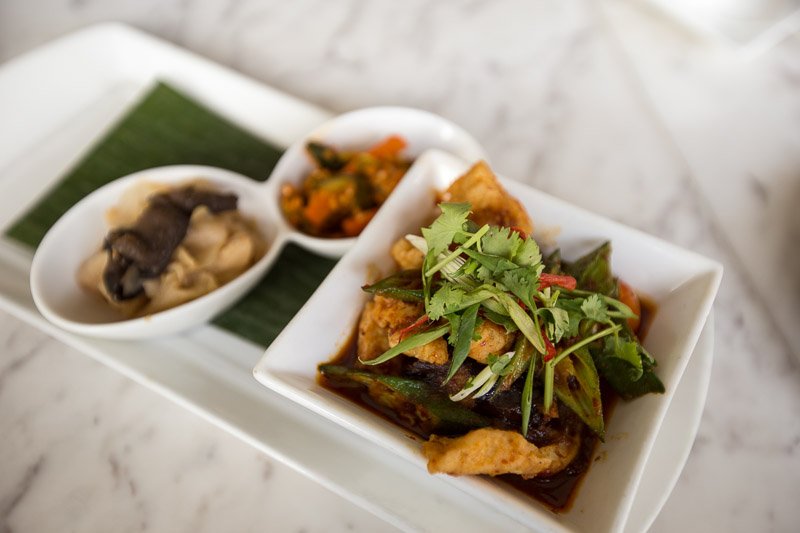 At this point, I was rather stuffed but I’d gladly make room for the next dish: Asam Fish Fillet (Seasonal Price). Looking at those fried grouper fish slices reignited my appetite. I expected a rush of spice but the sauce proved to be a little more complex, it was accompanied with a mellow tanginess that added a layer of flavour to the dish.

Although I quite liked the flavours of the sauce and fish, I found the dish to be a little underwhelming as compared to the other bolder flavours from the meat dishes. 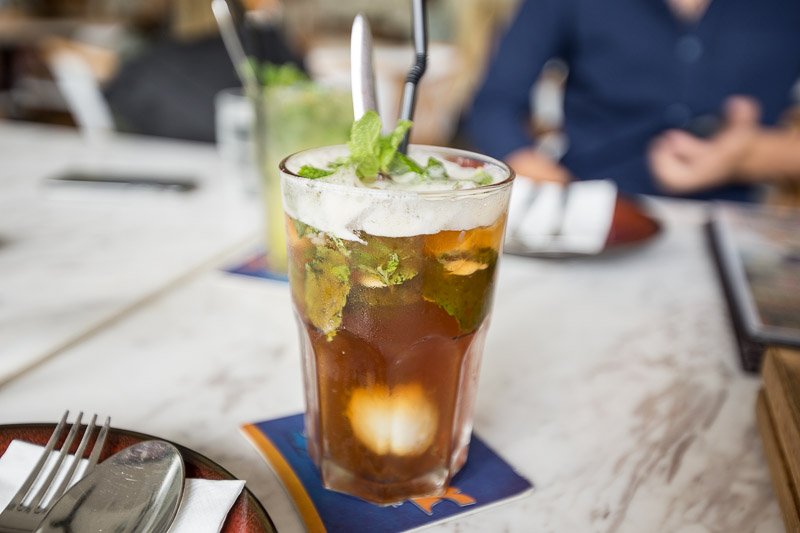 And what better way to end a heavy meal than with a refreshing drink? The glass of Lychee Fruit & Mint ($9) felt absolutely revitalising; it did wonders to eliminate the jelak feeling with its pronounced taste of mint.

Dulukala At Island certainly has an extensive menu of authentic Peranakan classics. I especially enjoyed the Tauhu Telor, because it was by far one of the better ones I’ve had.

The prices are pretty affordable, especially when the restaurant has lunch and dinner set meals.

So you’re looking for good Peranakan cuisine, come by Dulukala At Island on your next food venture.

Previous article5 Best Roast Chicken Places In Singapore To Get Your Juicy Chicken Fix
Next articleWa Bento: Customise A Bento Set For Under S$10 At This Japanese Joint In Downtown East