Eathai Foodcourt Bangkok: 4 Regions Of Thai Cuisine To Indulge In

If Thailand is the land of smiles, Bangkok is the city that we always seem to be smiling about. It’s where you can feast like a king and buy clothes by the suitcases — or truck load if we had the logistics I’m sure. A city that bombards your senses, this is where tradition and modernity have collided, creating an explosion of ideas and concepts. 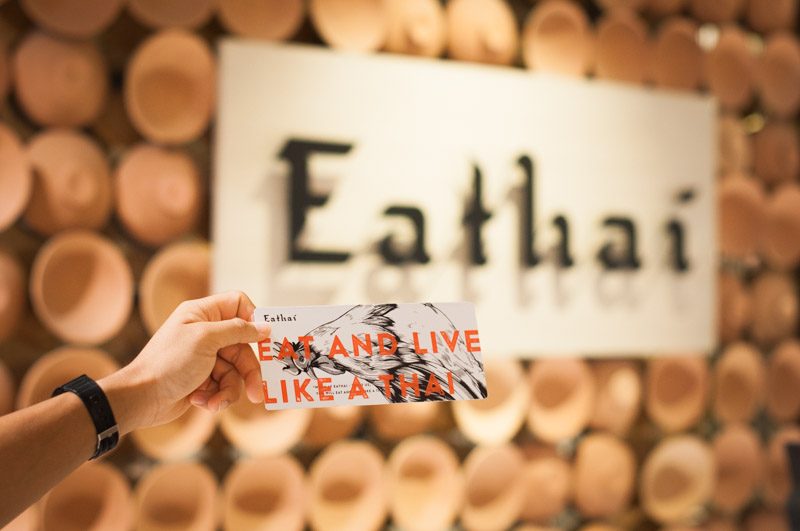 For all the new-fangled pretty “insta-worthy” food that’s all the rage, we might forget that Thailand is a big country with (food) culture that varies from region to region. But “how are we going to try all that Thai cuisine has to offer?” you exclaim. A food court that’s how. I’m usually one to avoid air conditioned food courts where the dishes on offer are usually prepared with a ladle of apathy. But, helping change this opinion of mine is Eathai, pronounced “eat thai”, the newly refurbished food court located in Central Embassy that does a good job of packing all that Thai cuisine has to offer into one easily accessible dining hall.

Enter the concept of Krua 4 Pak – 4 regions of food, which means binging on Thai cuisine in the capital won’t go stale fast with the array of dishes and variations in regional cuisine. As if Krua 4 Pak didn’t offer more than even the biggest eaters amongst us, including myself, could stomach, Eathai allows customers to delve deeper into Thai cuisine. Eathai brings the streets indoors with a section dedicated to street food and keeps things interesting with Moom-Aroi, a pop-up stall that changes its offerings every two weeks. 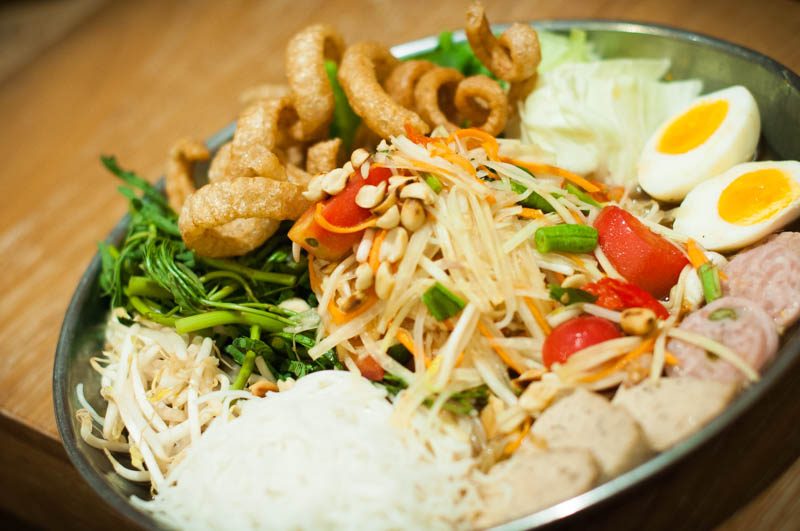 Spicy – that’s the first thing that comes to my mind at the mention of Thai food. From Esan Kitchen, Som Tum Tad or mixed papaya salad (250 THB) is the papaya salad we’re all familiar with but, on steroids.

There’s always extra word count available to talk about delicious pork products. Deep fried pork rind will always hold a special place in my heart and stomach. The pickled sausage however, was a porky revelation for me. 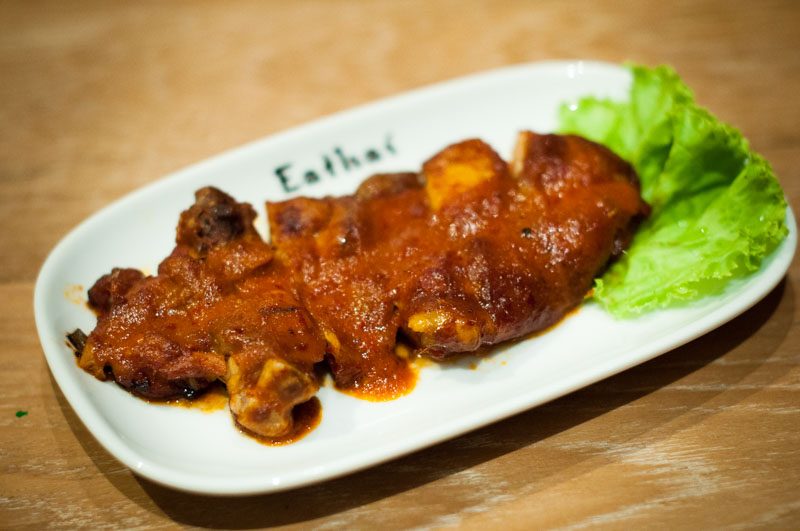 With the Southern region of Thailand sharing a border with Malaysia, it’s no surprise that its cuisine is influenced by Malay dishes. With items like beef curry and prata (190 THB) on the menu, the bbq chicken marinated in Southern spice (small 110/medium 130 THB) is sweet, mildly spicy and perfectly tender.

Feast From The North 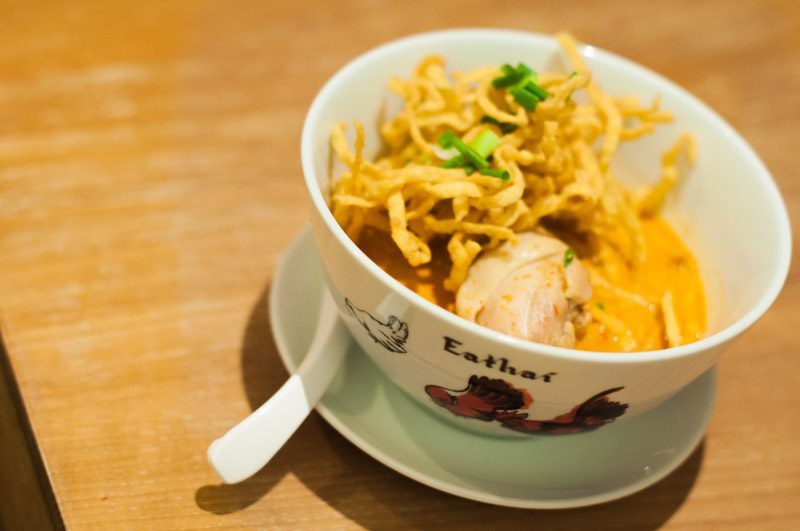 As its name suggests, dishes like Northern Thai style curry noodle soup (130 THB) can be found here. Creamy and spicy, imagine a richer version of laksa made with mee pok instead of thick bee hoon or yellow noodles. 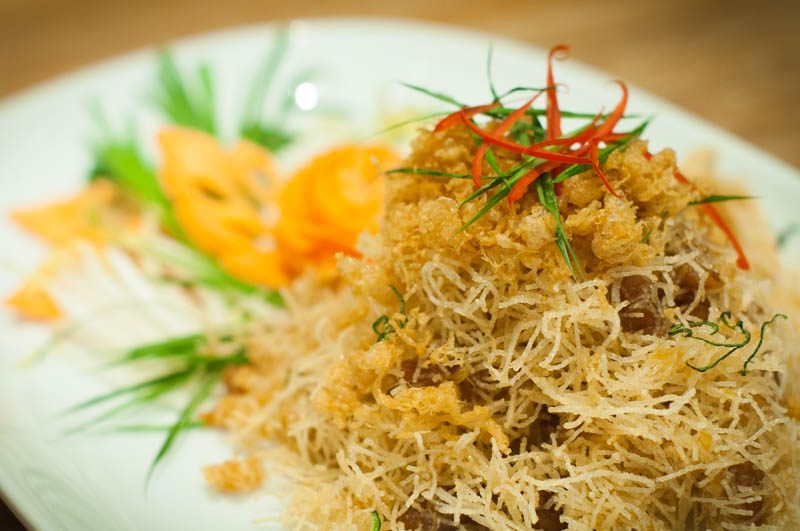 Ever fancied a taste of being royalty? I meant that quite literally. Dishes like the sweet, sticky and crispy mee-grob (120 THB). Traditionally served to Thai royalty, or those lucky enough to rub shoulders with them, their food is now available to us — the common folk. It’s good being king, if only just for a day. Among the street food stalls in Eathai is yum, which isn’t just an expression for delicious food but, means “mixed” in Thai. It’s also home to what is now one of my favourite salads, spicy fluffy catfish salad (130 THB).

Fluffy catfish isn’t some fur coated species of catfish but, catfish that has been shredded before being deep-fried, creating a light, crispy and flossy texture that makes the papaya salad aspect of the dish more fun to eat because crispy things makes salads better. 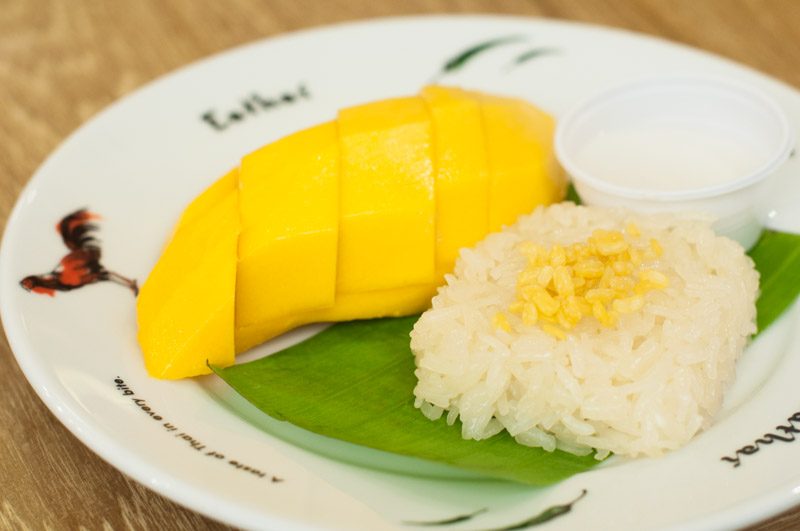 Not one to do things halfway, dessert had to be done. You’ll be able to find your classic mango sticky rice (145 THB for small) among more interesting sweet treats like the warm bite-sized pandan puddings (50 THB) topped with shaved coconut. 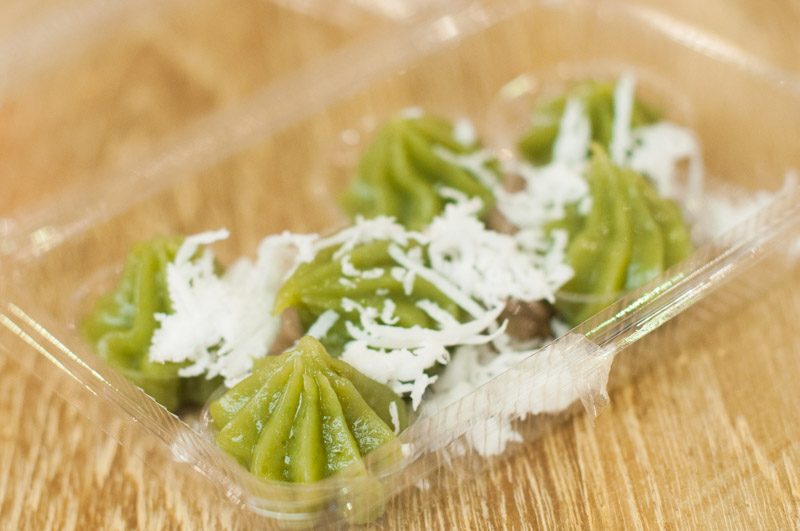 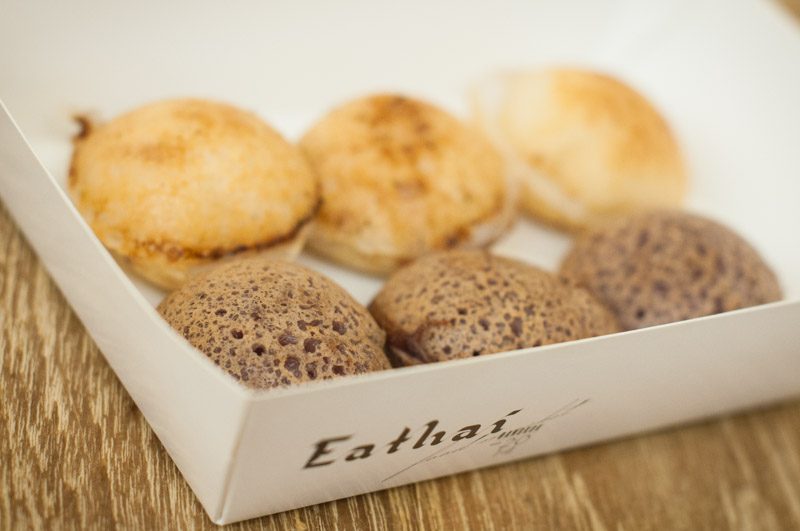 A thin crisp layer on the outside from the mould it’s cooked in, biting into the rice puddings (50 THB) gives way to the warm, soft and delicate interior. 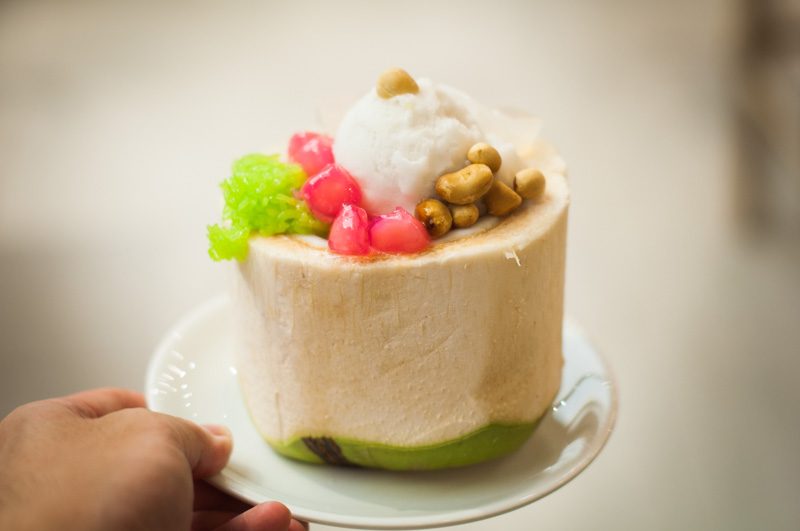 At the very creatively named stall Thai Tea & Coffee, lovers of coconut ice cream in young coconut (70 THB with all toppings complimentary) can get their fix and mull over the decision of which topping to go with. The fuss free solution would be to ask for all of them.

If you’d like to bring the tastes of Thailand home, just have a look around Eathai Market and Grocery 4 Pak. 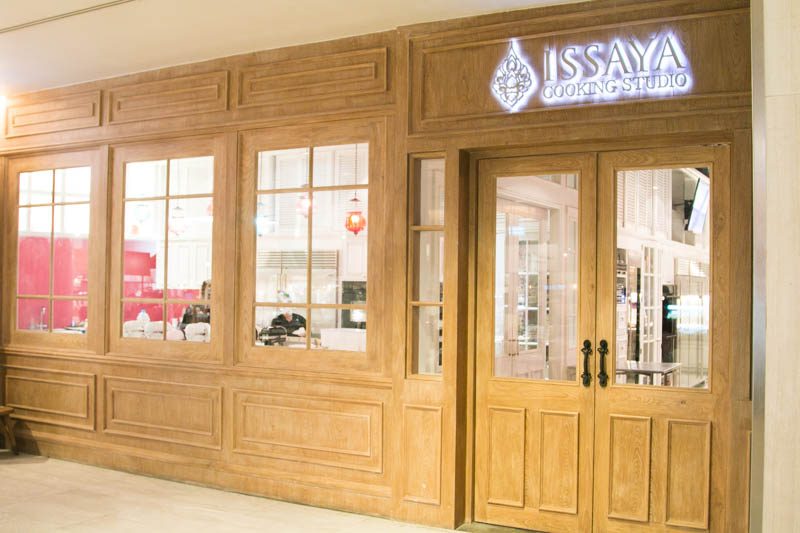 Fancy adding new skills and dishes to your home cooking repertoire? At Issaya Cooking Studio, opened by Thai Iron Chef, Ian Kittichai, you’ll learn from professionals and be able to bring back the know-how to whip up Thai inspired dishes from the comfort of your own home.

When you’re done stuffing yourselves silly, you can and should take a walk around Central Embassy. Yes it might look like just another mall but, within it you’ll get a glimpse into the rising Thai fashion industry. THAITHAI is a link way connecting Central Embassy to Central Chidlom, here you’ll be able to browse through the collections of local designers. 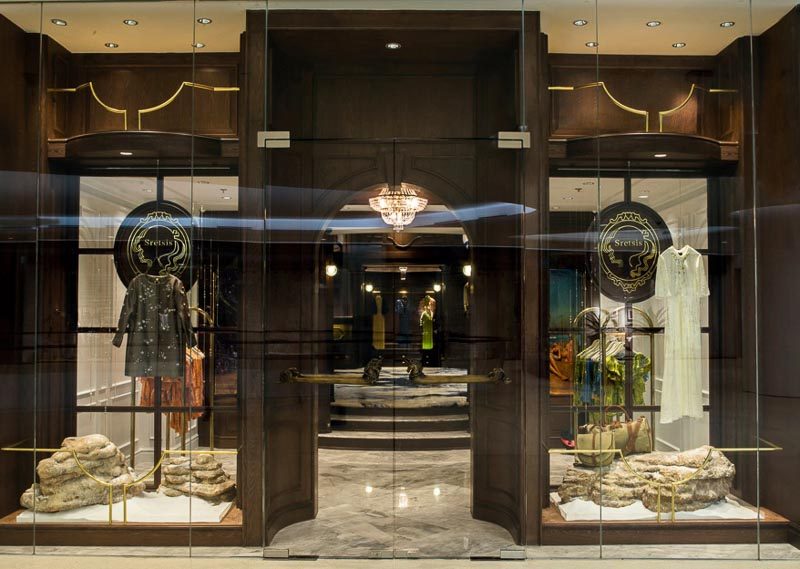 Even if the designs aren’t your sort of thing, the concept of the shop and brand as a whole warrants a visit, even if just for a while. 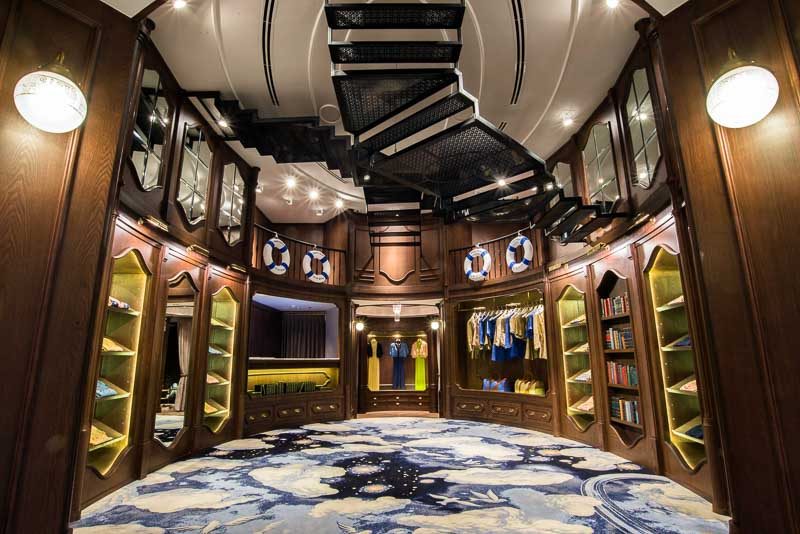 A label started by three sisters, hence the name Sretsis, which is “sisters” spelt backwards, is whimsical and quirky. 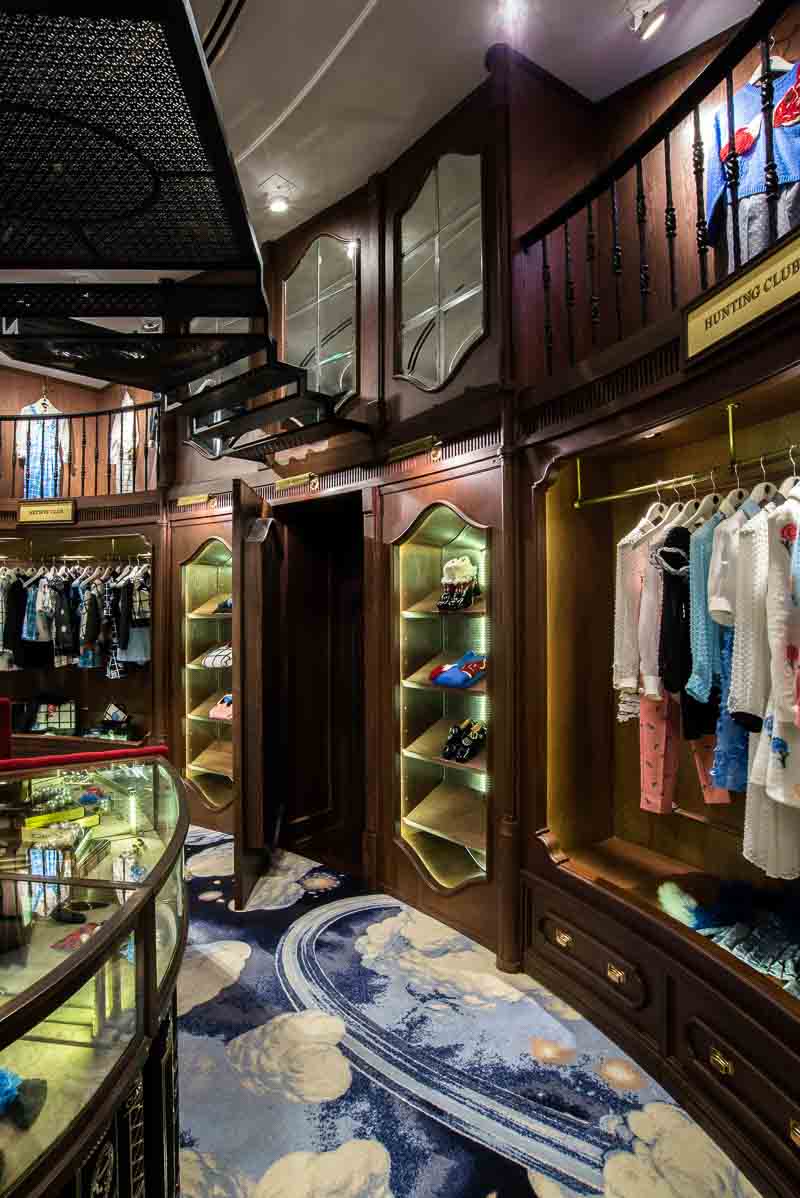 The store has hidden doors that lead to the jewelry section of the shop which is darker and even more inspired by fantasy.

No two food courts are made the same but, if more food courts in Singapore could serve up food of the same standards as Eathai, we’d all have more enjoyable lunch breaks. In the meantime, we’ll just think back to our meal at Eathai to dream of what could be, till our next trip to Bangkok. Heap Seng Leong: Get Transported Back In Time While Sipping On...