A propitious and wholesome dining affair. Priding itself with its trademarked Straits Chinese cuisine along with the local and international specialties it has in store, Ellenborough Market Cafe has an array of well-tasting dishes lined up for the upcoming Chinese New Year along with their buffet spread. For this Chinese New Year 2016, the restaurant is offering the Prosperity Lunar New Year Buffet. Some hot starters such as the BBQ Bak Kwa handmade by the in-house chef as well as handmade Pineapple Tarts are good in getting you kick-start for your Lunar New Year feast. Available as part of the buffet spread, the Stir Fried Seafood Lobster with Black Bean Sauce as well as the Soft Shell Crab with Thai Basil Sauce are some delicious warm starters to commence your festive indulgence. These are just two of the more exquisite food items available in the delectable buffet spread. Available as one of the items in the dessert spread, is none other than Ellenborough’s signature Durian Pengat. The durian taste is unadulterated, pure and strong. This dessert item is simply durian paste. If you love to eat durians, this signature dessert item at Ellenborough is not to be missed. As a form of tradition to signify an auspicious start to the Lunar New Year, the course meal commences with the Lo Hei. To commemorate the year of the Monkey, Ellenborough has arranged its yusheng platter to be patented with the design of a monkey’s head. Photo-worthy indeed. I especially love the raw salmon used for the yu sheng platter. The salmon slices were thick, silky, smooth and bouncy. I would say it’s one of the best fish slices used for a yu sheng platter, compared to other Chinese restaurants which I had visited. 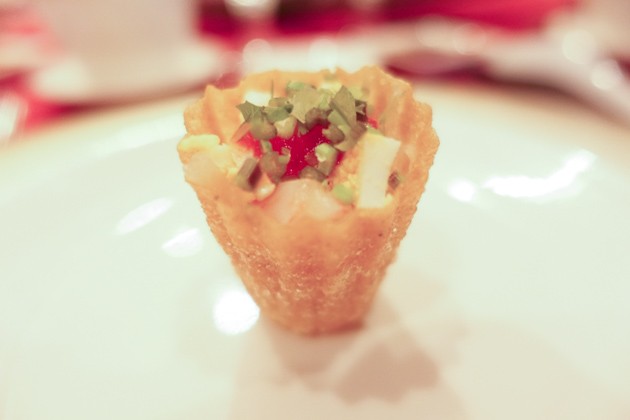 A sweet, savoury bite-sized snack served right before the proper dishes, the kueh pai tee ingredients offered here include juicy prawn pieces paired with egg, then topped with chives and chilli sauce. It was an overall delectable crunch, a good pairing between the sweet, flavourful ingredients and the crispy biscuit. Ellenborough has pledged not to serve shark’s fin on its menu, hence taking its place is the braised fish maw soup with crabmeat. I must say that the quality of this replacement is awesome, with its flavour and texture resembling that of the real shark’s fin soup.

The crabmeat was luscious, exuding springy tenderness when chewed along with the crisp of the fish maw. I am very much impressed at how they managed to conjured this dish up to the standard of a real shark’s fin soup. This dish is made up of sea cucumber braised in rice wine, hence a deeper taste from the common sea cucumber which we usually have at other banquet places.

Personally, I hate the slimy, disgusting texture of this particular seafood. It is to my utmost surprise that the one here is braised till it is sweet. Power of the rice wine indeed. The delight of this dish lies in the work of the XO Sauce, giving the snow peas a light, savoury taste. This blend of taste brings out the essence of the dish – the scallops. They were cooked to a texture which that was smooth, soft and easy on bite.

I like this dish for its specialty, in that it offers an aromatic twist of flavour to a classic dish. An interesting dish whereby the ribs weren’t too hard, unlike the typical pork ribs served at other Chinese restaurants. I could literally taste the champagne which gave the pork ribs a delightful tinge of sweetness. Available for the dinner menu at Ellenborough is the baby lobster, a variation from the slipper lobster that is available for the restaurant’s lunch menu . Despite being miniature in size, I could taste the fresh and tender texture of the lobster meat. This la mian is served in the style of Szechuan dan dan noodle. Hence, the dish gives a tinge of spicy tanginess.

Hand-pulled by Ellenborough’s chefs, the texture of the noodle was splendid. It was very crisp upon bite with some bounciness, neither soft nor soggy at all.

The soup for the dan dan noodle contained very fine peanut bits, which were fragrant upon bite. The peanut bits add a tinge of sweetness to the spicy tang of the soup. On top of that, the spring onion provided an added fragrance that gave a good blend of flavours to the entire dish. I was truly delighted when served with this luscious dessert platter. The layout was simple, yet delectable. Apparently this dessert platter is specially crafted to create a sweet ending to the dinner menu. The nian gau was served uncooked, and I specially love it this way. Unlike fried nian gaus which have a harder texture, I prefer it raw, as I’m able to taste the fresh and delectable stickiness along with the sweetness of this traditional Chinese New Year delicacy.

Topping it well, the bits of desiccated coconut bits added a good crunch to the savoury treat. It was a good balance of texture, combining stickiness and crunch. The yam dumpling was sweetened, but not done too excessively. I could taste the thickness of the yam paste. It came as an awesome pairing with a sesame-flavoured glutinous rice ball. I always feel that sesame is a perfect match for yam, as the two together give a good balance of rich sweet taste along with contrasting texture of delectable sesame bits with lumpy yam paste. Coupled with Ellenborough’s signature durian pengat, this whole dessert platter is served as a complete roundup to the one’s dining experience at this restaurant. The three different dessert items exuded rich flavours of traditional Chinese dessert treats, presented with a modern and inventive style of display.

Overall, I am very satisfied with the line up of dishes at Ellenborough Market Cafe.

The dishes are quintessence of the Chinese cuisine, and are special in terms of their blend of flavour and taste. Especially love the concept behind every dish being served here, in that they were meticulously crafted by the chef in house, and were very much aligned with the spirit of prosperity and bloom.

Ellenborough cafe’s CNY menu is complete in providing the diner with a festive celebratory feast as one ushers in an auspicious new year.