Seafood in hawker stalls have a tendency to go two ways: good, but it’s your usual tze char dishes, and bad, because it’s fish and chips from that western stall. However, Fin-ery Kitchen, which is located in an unassuming coffee shop in Bedok Reservoir, presents itself as a step above the others, with unique offerings such as paella and fish and chips where you can choose what type of fish you want. The owner of Fin-ery Kitchen, David, is a chef with over 25 years of experience. He had stints as the executive chef of Paradise Group and was once a chef at Michelin-star restaurant Saint Pierre.

He decided to start Fin-ery Kitchen as he wanted to educate the masses that fish and chips is more than just fried dory. This is why he decided to give diners the choice between three fishes: dory, barramundi and haddock.

Fin-ery Kitchen is currently in the process of getting its halal certification and is currently pork, lard and alcohol-free.

What I tried at Fin-ery Kitchen Despite its effort to enlighten the masses about the diversity of fish and chips, Fin-ery Kitchens’ menu was quite diverse and looked like something out of a high-end Western cafe. You know, the ones that have phrases like “Eat, Pray, Love” on their walls.

Apart from seafood, they have Grilled Lamb Cutlet (S$11), Buttermilk Spring Chicken (S$6/S$11) and even Grilled Tomahawk Steak (market price)! Surprisingly, they even managed to squeeze in Gourmet Burgers with handmade patties such as Grilled Chicken (S$5) and Beef Patty (S$6) with a side each. Everything sounded delightful on the menu but I was itching for seafood, and so went with an Individual Seafood Paella Rice (S$10), Prawn Fritter (S$7) and Dory (S$7) with two sides, Mac & Cheese and Pasta with tomato sauce.

I wanted to get the Barramundi (S$10) which was a fan favourite, but it was sold out. In fact, quite a number of items were sold out during lunch when I got there, such as the Calamari Fritter (S$5) and sides such as Roasted Pumpkin. I ain’t even mad, as it shows that the food was really made from scratch! 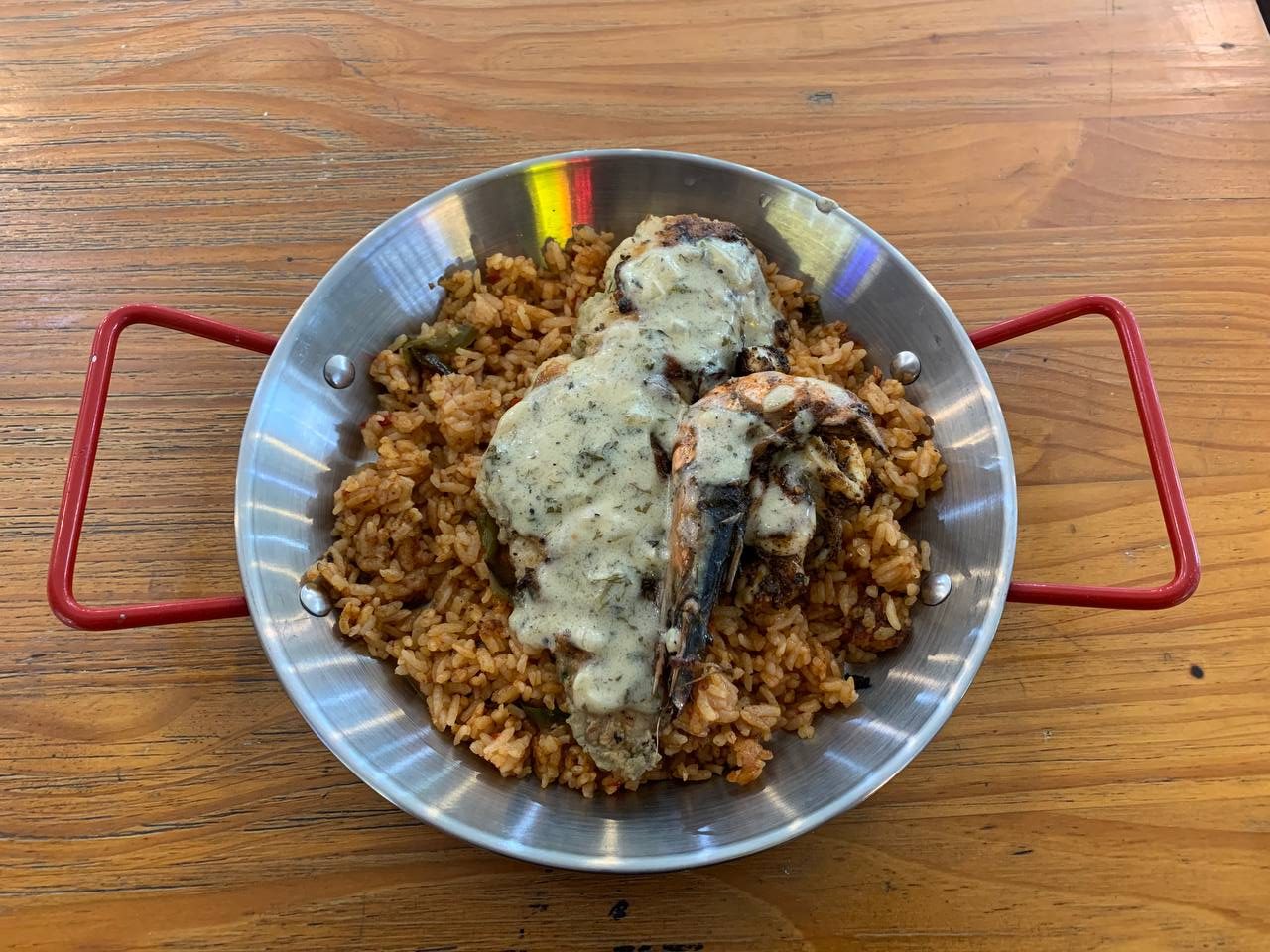 When my Seafood Paella Rice arrived, I was really dumbfounded by how good it looked. It didn’t gel with the coffee shop environment that I was in, with old folks at a nearby table laughing and some others gorging on economic rice. It felt out of place and I loved it for that. It came with a piece of grilled fish finished with creamy sauce and a single large prawn, as well as a couple of grilled squids over a bed of tomato short-grain rice. Before even coming to Bedok Reservoir, I had an initial concern that the paella served would be an amateur’s take on fancy fried rice, but that disappeared after my first spoonful. You could really taste the tomato paste as well as spices such as paprika. It was also well-cooked and remained on the good side of both soft and chewy. Similarly, the fish was grilled nicely with a special cream sauce providing another layer of flavour to cut through the already rich flavour of the paella rice. I also appreciated how flaky the fish was, making it easy to scoop along with my rice. Probably my favourite part of the paella was the grilled squid. There must be so much thought when it came to cooking the tentacled protein, as its chewiness and QQ texture completely blew my mind and shattered my initial expectations of Fin-ery Kitchen. I now understood who the new kid on the block was.

It might come across as over-seasoned to some, as they were definitely liberal with the cajun seasoning on the squid. This resulted in some pieces being saltier and packing slightly more heat in them. Nevertheless, I’d rather have it over-seasoned than under, especially when cooked this well. You’re right, I should have gone with the haddock, as recommended by the chef but I felt compelled to try the classic dory fish. That afternoon, I just wasn’t in the mood for fries (as you probably know what they taste like) so I opted for pasta-based sides. It also came with a slice of lemon and homemade tatar sauce. After applying slight pressure from my fork, the Fried Dory caved in with a decent crisp, revealing a slightly mushy-looking interior. And my first bite, unfortunately, confirmed my initial suspicion. The mushy dory flesh reminded me of baby food and even tasted like it, with minimal flavours apart from the usual fishy taste. I went to taste the batter, in hopes that I’d be saved by some sort of seasoning but to no avail. The batter was as basic as ordering fish and chips in a Western restaurant. I was left wondering how nice it’d be if I had chosen the grilled option instead. The Mac & Cheese, though a tad generic, had actual flavour and was one of the saving graces of the dish. Its cheese sauce tasted like a blend of store-bought nacho cheese with cream. The Pasta with Tomato Sauce was also surprisingly well-cooked, with the pasta being al dente and the sauce that was used tasted nice. Who cares if it was from a jar or canned— it was more flavorful than the actual Fried Dory itself.

I tried the Fried Dory with the Tatar sauce but it just didn’t cut it. The lack of seasoning was what killed this dory for the second time. However, the fact that it uses actual fish and probably homemade batter made it a step above usual hawker offerings, albeit a bland one. Finally, I tried the Prawn Fritters that also came with homemade tatar sauce. Though I could appreciate how large the size of the prawns were, it faced the same issue as the Fried Dory with the batter being flavourless.

The actual prawn itself tasted naturally sweet despite not being seasoned, but it was a tad dry.

Despite hitting a stumbling block when it came to its fried dishes, I have all the confidence in the world that Chef David can improve on them. I mean, have you read the guy’s resume?

I’ve also purposely not mentioned how affordable Fin-ery Kitchen is. Seriously, some of the prices are really absurd for the quality and the people preparing them.

Established seafood chains beware, there’s a new kid in town and he does not charge S$21.95++ for fish and chips!

Where to eat: 10 hawker stalls in Singapore opened by ex-restaurant chefs