A fairly new addition to the Hougang area, Five &2 was opened late November 2017 at Punggol Park. Boasting both an indoor seating area and an alfresco dining area, the bistro’s location by the lake makes it the perfect idyllic spot for a meal. We were heartened to hear about the bistro’s two founding social missions: providing work opportunities to the marginalised and delivering nutritious meals to resource-poor children from the ages of two to six.

Founded by Timbre Group’s Managing Director Edward Chia and two other partners, Five &2’s name stems from its promise to abide by their two social missions as well as to deliver a fresh and nutritious meal to an underprivileged child with every five meals sold. 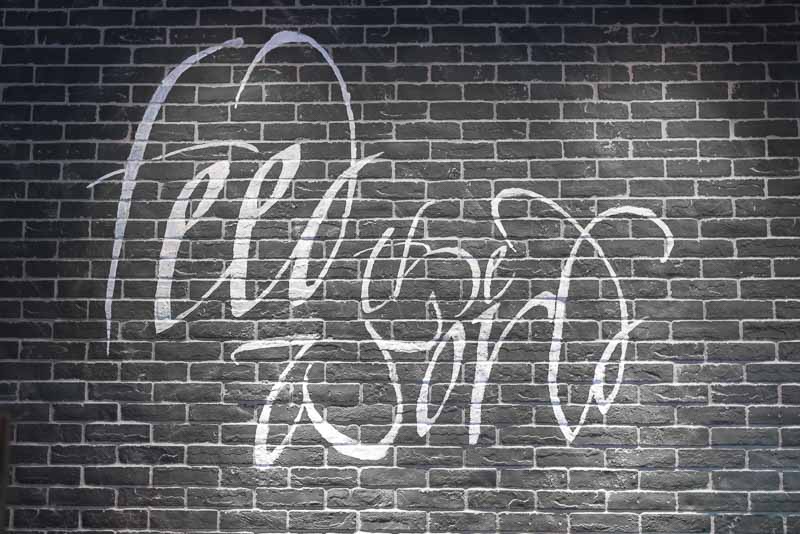 The team also works with organisations, such as Singapore Corporation of Rehabilitative Enterprises (SCORE), SPD and SG Enable to hire ex-inmates and people with slight disabilities.

Working with marginalised employees requires careful planning to accommodate their needs. Even when considering additions to the menu, the employees come first. 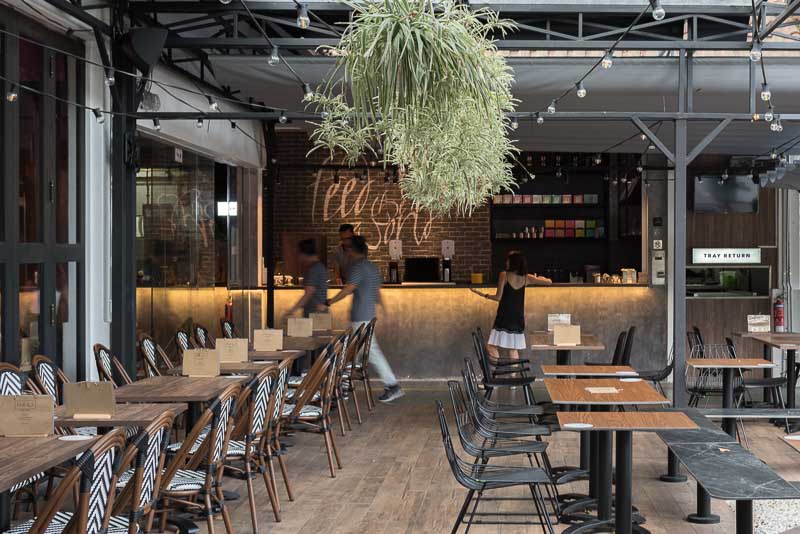 To create an inclusive environment where everyone can fulfil the entire range of duties, Five &2 uses technology to adapt the job scopes.

Firstly, they’ve introduced automated cocktail/ mocktail machines that are pre-programmed with the ratios of mixes to reduce the amount of physical effort needed. 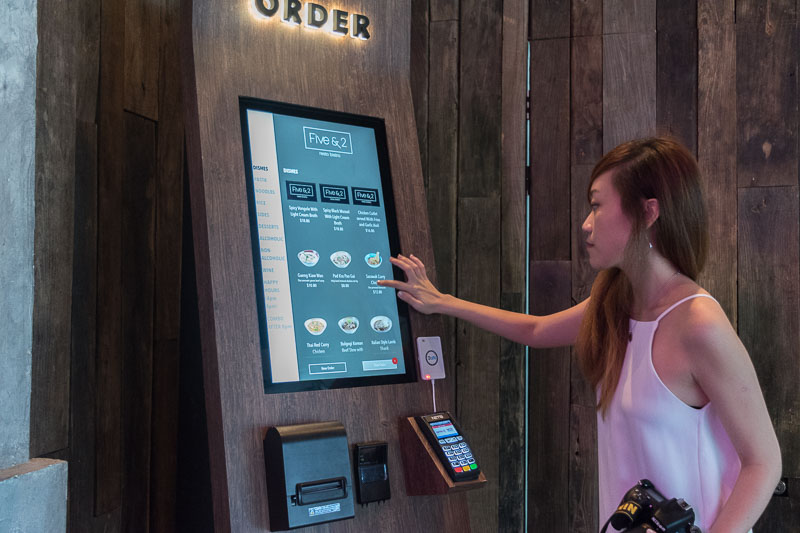 Secondly, the bistro operates on a semi-service system.

Customers can opt for self-order and self-payment, and placing the buzzer on the table informs the staff where to send the food to once it’s ready. After the meal, diners can return their own trays to get their $1 deposit back. Consequently, they reduced the service charges to a mere two percent instead of the usual ten percent.

With our hearts full from hearing about the concept behind the bistro, we moved on to satiate our empty stomachs. When the dish was served to our table, our senses were immediately stimulated by the aroma (and sight) of the freshly fried chicken. It tasted as good as it smelled — deep fried to perfection with a satisfyingly crunchy batter and moist and tender meat. But, the star of the dish was really the chilli sauce. Creamy with hints of sweet Thai chilli and light tanginess from the calamansi; it was the sort of spice that lingers on the tip of your tongue and slowly, merrily, burns and tingles.

Fair warning: it might be too spicy for those with a low tolerance for spicy food. But, it paired so well with the savoury chicken wings that I couldn’t give it up. The Sarawak Chicken Curry ($12.80) was labelled as “our personal favourite” for a good reason — it’s probably one of the best curry chicken dishes I’ve had thus far. The chicken was competing with the gravy to win my heart and they’ve earned an equal share. The chicken was really tender and the curry was rich and thick, with a nice nutty flavour. Spice-wise, it provided a more comforting kick that was nowhere near as potent as Chef Gino’s Chilli Sauce.

The chunks of potato in the dish were also done just right. I appreciated how the chef thoughtfully fried the potato before adding it in to ensure that while it’s nice and soft, it doesn’t turn to mush in the curry.

I found the dish to be worth its slightly steeper price tag. The Sarawak Chicken Curry was really the epitome of a nice comfort meal. 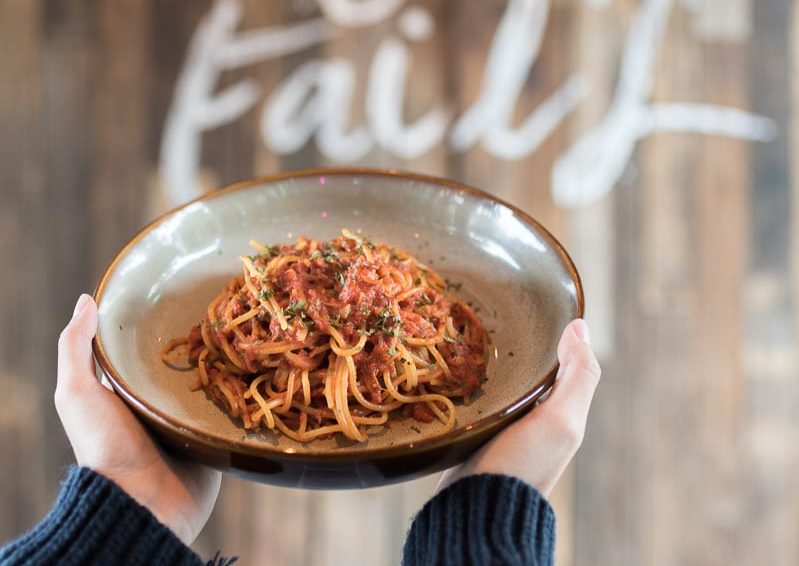 Sadly, the Crab Meat Pasta ($18.80) was a bit of a letdown, especially in comparison with the other dishes which were fantastic. 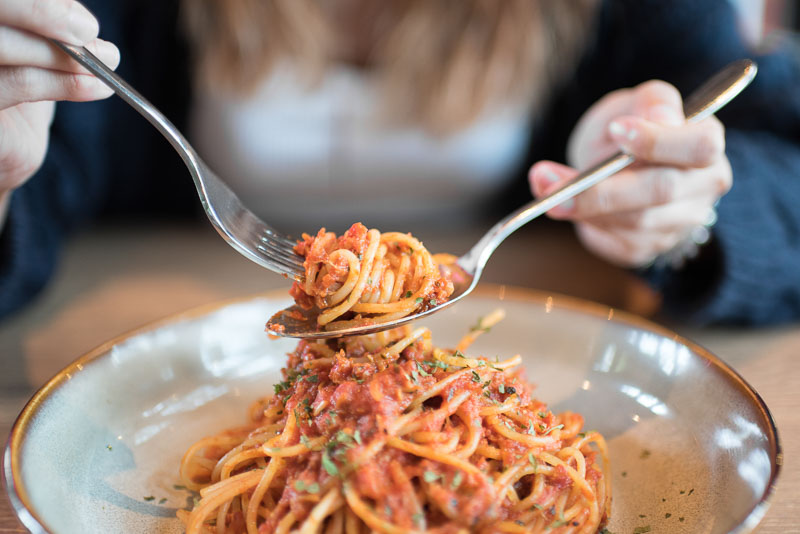 The pasta was done al-dente and I liked how each strand was well-coated with the sauce. However, I felt that that the tomato base was a little too rich and overwhelmed the crabmeat flavour. It also got jelak after a while. For those in the mood for seafood, perhaps opt for the Vongole ($18.80) instead? The Vongole is served with clams cooked in Chef Gino’s spicy white wine cream broth and an alternative is the Norwegian Black Mussels ($18.80), which is served with the same broth.

The seafood was well-cooked, albeit a little gritty in the case of the clams, but the broth was what won me over. You know how sometimes shellfish can turn out a little too fishy and thus off-putting? This broth had none of that problem. Rather, it was perfectly infused with the sweetness of the shellfish and hints of Tom Yum flavour in the broth gave it a nice kick.

The broth was so addictive that I was ended up slurping spoonful after spoonful. 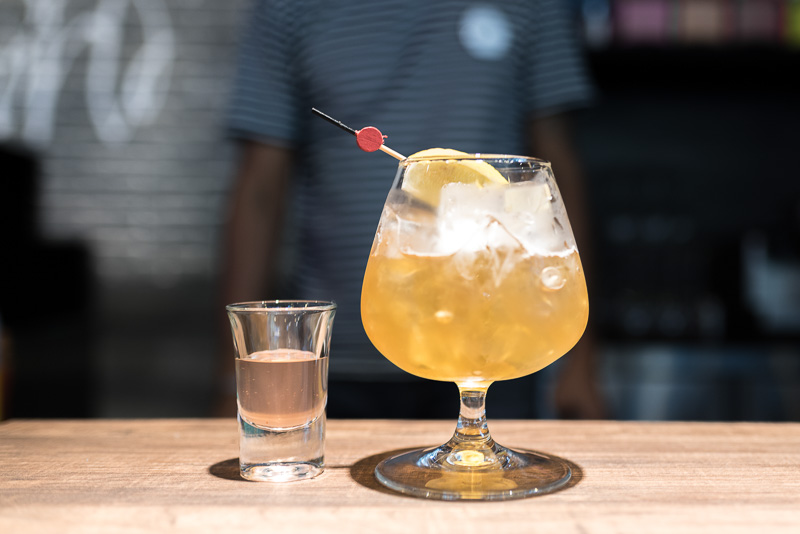 After having our food quota more than filled for the day, we moved on to some cocktails. A play on the classic Gin & Tonic, Five &2’s G & Tea ($12) features Oolong-infused gin, strawberry syrup and tonic.

An easy drink to knock back, it was light and refreshing with a hint of Oolong that lingered behind as an aftertaste. Besides the G & Tea, the two other cocktails on Five &2’s menu sounded equally quirky and interesting. The drinks are specially concocted by a mixologist and a little fun fact the team shared with us was that the Ang-Mo-Politan was named after said mixologist. He’s an ang-moh so… Ang-Mo-Politan. Heh. 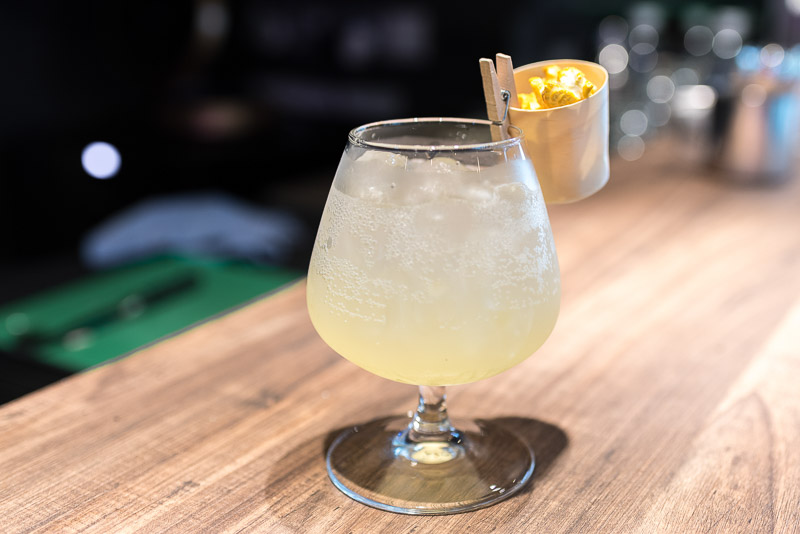 The Popcorn Lover ($7) literally tasted like popcorn! Right after my first sip, I stared incredulously at my colleague in disbelief. Besides the popcorn flavour, there was also a hint of tartness from the calamansi juice which made the drink really refreshing.

It was a fun and novel drink that we both adored – kudos to the team for nailing this perfectly. 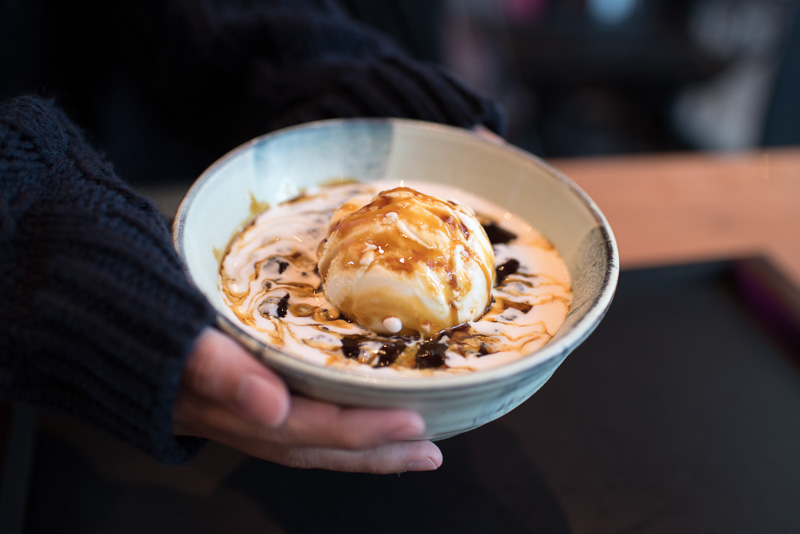 Thank goodness we had room for dessert because I wouldn’t have wanted to miss the Pulut Hitam ($5.50). Described as one of the most popular dishes, the black sticky rice dessert had just the right amount of sweetness and it was such a nostalgic treat!

It was dense and fragrant and had a really nice texture; not too mushy and not too hard. The coconut ice cream was really creamy and really enhanced the flavour of the dish.

If you’re looking for somewhere with a good ambience, feel-good AND tasty food, you should probably swing by Punggol Park soon. As my colleague aptly summed up: “10/10 would marry the chef(‘s food)”.

A final tip: download the Five &2 membership app to earn a 10% rebate on your orders. This means that if you spend $50 on one occasion, you’ll get a $5 credit to be used immediately for your next meal. Winning!

New twists to a pair of old favourites: Hello Panda and Yan Yan BOTH launched in all-new flavours