Five Marbles Craft Beer Restaurant: Craft Beers Starting From S$5 For A Half Pint To Pair With Beer-Infused Dishes At Rendezvous Hotel There are plenty of craft beer bars around, but very few places in Singapore that utilise craft beer in their food. Located in the courtyard at Hotel Rendezvous, Five Marbles Craft Beer Restaurant is so focused on craft beers that its food menu changes every two to three months, dependent on the types of beers Five Marbles is able to obtain.

With 12 different craft beers on tap at all times, the variety is enough to sate any beer palate. I was lucky enough to try the beers and food and experience how well they paired together. 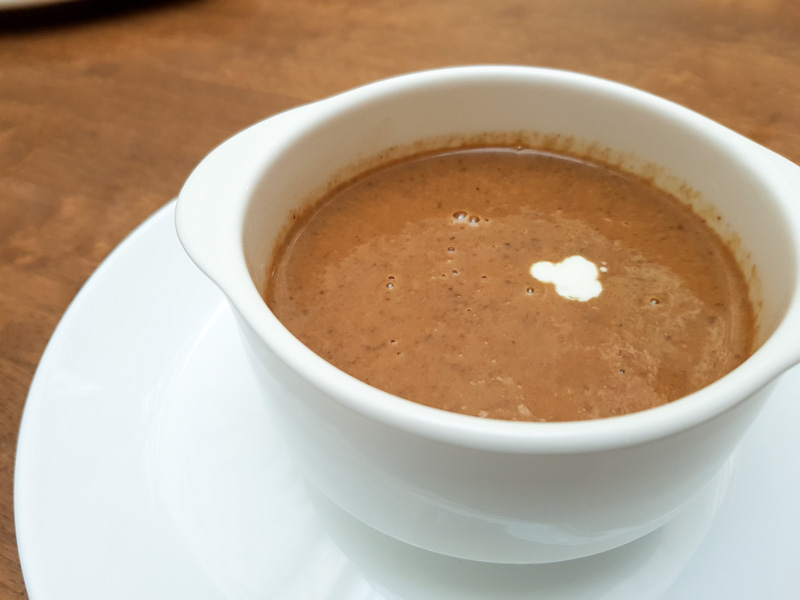 Starting off with the Creamy Craft Beer Mushroom Soup ($8), I was pleasantly jolted by the prominent taste of the Adnams Dry Hopped Lager that was used in the soup along with portobello, white button and shiitake mushrooms.

The soup was creamy with delicious chunks of mushrooms, which I thought gave the soup more dimension as compared to blending it all up. The Bolognese Linguine ($16) was a hearty dish, with a dry and chunky bolognese sauce that’s more traditional than the watery sauces seen in the market. Simmered with red wine for six hours, this sauce has plenty of flavour and the infused olive oil adds a nice touch of herbaceousness to the dish.

I particularly liked that Five Marbles chose to go with linguine pasta instead of spaghetti; while both are unauthentic versions (bolognese is traditionally served with tagliatelle or fettucine), the slightly wider linguine helped to hold the sauce better. I ordered the Wayward Wheat ($6 half pint, $12 pint) from local Singaporean brewery, Innocence Brewing, to pair with the pasta, as advised by the chef. The cloudy beer had a thinner head with a lighter body that wasn’t too foamy, with a wheaty aroma and slight hints of corn. The Temple Garden Yuzu Ale ($6 half pint, $12 pint) from Baird Brewery in Japan caught my eye as it was a 2016 seasonal release that will be gone forever once the remaining kegs around the world run out. The strong notes of yuzu slowly tapered off to a dry finish with slight bitterness; this will be perfect for people who prefer citrusy beers.

If you prefer something a little sweeter, try the Zeffer Red Apple Cider ($6 half pint, $12 pint). Not overly sweet like mass market ciders, this one had a little more bite to it with a gorgeous light pink colour. This would be perfect for the ladies who don’t enjoy having heavier beers. 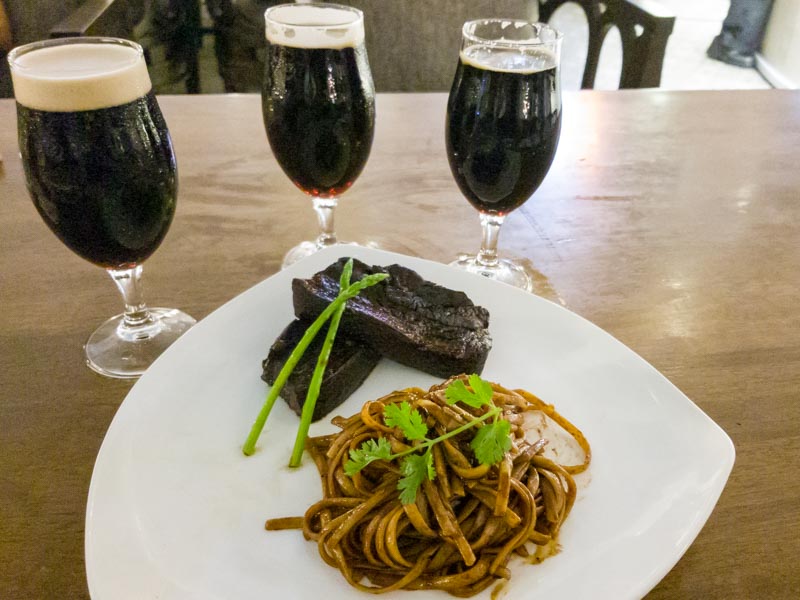 Moving over to the heavier side, the Beer Braised Pork Belly Linguine ($19) was my favourite dish of the night. Braised in stout after being marinated in Chinese herbs, the slabs of pork belly had a jiggly layer of fat that melted in my mouth. Accompanied by the same al dente linguine from the Bolognese Linguine, I thought this was a great main to showcase how beer can be utilised in food.

Pairing it with the same stout that was used in the braising, Young’s Double Chocolate Stout ($5 half pint, $10 full pint), it really brought out the flavour from the pork, with dark chocolate notes and a slight hint of coffee shining through.

For those who aren’t a fan of chocolate but love coffee, Calamity Coffee ($6 half pint, $12 pint) from Innocence Brewing is another good option to pair with this dish. With a taste similar to cold brew, this beer is packed with coffee flavour, but I found it to be a little more one dimensional as compared to the robust chocolate stout I had prior. Both beers were certainly a good way to end off the meal; a dessert for the beer lovers out there.

If you’re a lover of all things beer, then Five Marbles is definitely a place that you should check out for both their selection of beers as well as delicious beer infused food.