On the never-ending quest to consume all bovine on earth, Salta Argentine Parrilla was my next hotspot for Argentine style steak.

A table reservation was made on a public holiday evening, but I realized it was overly paranoid of me when I arrived to see enough empty seats for a PAP rally. Instinctively, it kicked in my mind that “crap, this place is gonna suck- Places with no crowd always suck.”, which is true 90% of the time. Thank goodness I was wrong. Lets clarify first that Salta is a corporate CBD haunt. Usually during office days/hours it IS packed (according to my date), and fortunately for me that night, it suffers the same drawback as any restaurant in the CBD area: lack of weekend/holiday patrons.

Anyway, since I was early again, I got a glass of house Chilean Cabernet Sauvignon. I completely forgot to read the label, not like it excites me as much as reading a cereal box, but the wine was medium bodied, fruity and very palatable to my anti-astringent taste. Not the best wine reviewer here, ahem. It was nice. So my date arrives and we proceed to salivate at the beef selection. We both ended up ordering the ‘Lomo’ or 300g beef tenderloin, some garlic bread stick thingy (a highly recommended item which mysteriously eludes from the online menu), Garlic Potato Puree as well as Sweet Potato Fries. They served 3 sauces that accompanies your steak- classic Chimichurri Garlic and Parsley sauce, and 2 others I’m clueless about. One had chilli flakes and anchovies while the other was akin to Salsa dip. Struggling with the complimentary WHOLE bread loaf with a bread knife that couldn’t cut water, I had to request they cut the bread into slices for me. Geez, way to work for your food. I ended up eating the 3 sauces with the breads only (and it was scrumptious), because I like my steak the way I like my women: with nothing on. 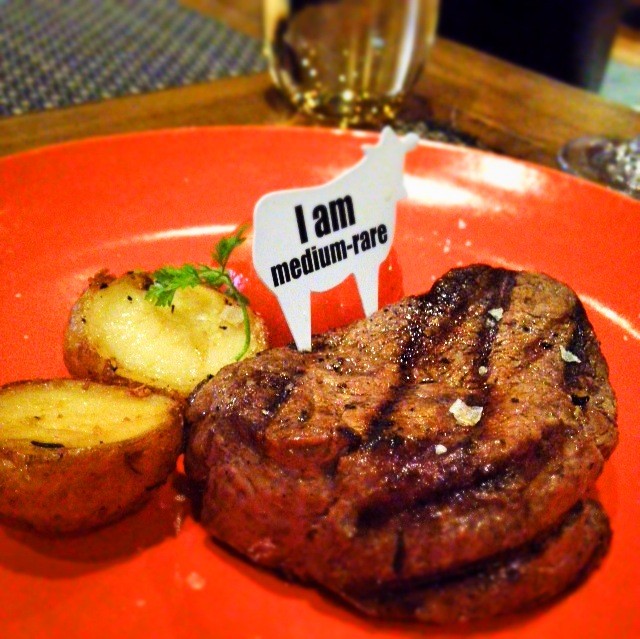 Our 300 gram tenderloins arrived, and resembled the size of my feminine fist. Personally, I find that thicker steaks are harder to grill as compared to the flatter longer cuts. Too low a heat and the centre doesn’t cook, too high and it chars the outer layer. Probably sous-vide cooking would have suited this thickness better. Consequently, there were a few outer areas of our medium-rare steaks that were overcooked. Such a waste. Argentine beef also tends to be less marbled and heavier in beefy taste due to ageing, so it’s less juicy than steaks normally eaten locally. That was perfectly fine with me, but just a heads up to anyone trying this beef. My comment on the potato puree is I love that it came hot. Sometimes when you mix in cold cream, the mash becomes luke warm or at room temperature, which is like eating baby food in Robocop. The sweet potato frites were fried crispy fresh, and would probably taste exactly how you imagined it to be. We ate too much bread and had to takeaway the fries though, so don’t be seduced by the succubus sauces.

As usual, 50% of an experience is in the service and Salta’s servers did a splendid job. Filipinos have way better service standards than locals. Highly recommend this venue (on a weekend) for a date as it’s less crowded and pretty affordable. Salta is also significantly cheaper than high end steakhouses, yet has decent a decent enough dining atmosphere and food. If you don’t want to break the bank and still impress, bring your business partners or boss here. However, please don’t expect to pay $30 for a steak here and compare the quality to Morton’s or CUT. That’s just being ignorant.