Superstar K is a Great Korean BBQ where you don’t have to queue. For too long.

Korean BBQ seems to be a trend that has hit Singapore hard, where the youngsters queue like ants to ice-cream dropped on the floor. Ssikkek, or 2D1N Soju Bang (Tanjong Pagar) as it is more commonly known, sees queues starting at 6pm and ending the next day. I’m serious. I arrived at the restaurant at 6.45pm on a Friday, and asked the kindly looking Korean attendee for a table of 2, how long I would have to wait. He replied:

I had a minor stroke and had to clarify with him what he meant- so apparently the current waiting list is all the way till about 9pm already. Right. No Korean BBQ for me then.

Walking a little further down Tanjong Pagar road, my friend introduced me to what she said was one of the best Korean BBQs she’s tried – Superstar K. The whole stretch of road was littered with Korean BBQ restaurants, although none had the crowd like 2D1N. We arrived at Superstar K to see that the restaurant was full. Sigh. We asked the Korean waiter how long the wait would be, and LO AND BEHOLD, 30 minutes only! Jackpot.

Personally I HATE queuing for anything, even for good food. Anything more than 30 minutes wait is deplorable. This explains why I haven’t eaten and reviewed Tim Ho Wan Singapore which perpetually looks like they hired extras to form a line outside their restaurant (*update* I finally did review it because I was invited for tasting).

So we waited patiently for our table. I was thinking to myself “this better be a damn good Korean BBQ for this wait”, and started eyeing the Bah Kut Teh across the road. I’ve personally been to Seoul, Korea and had several authentic BBQs in the country itself, so I’d say my expectations were pretty high. Finally we were invited in like vampires from True Blood, and were seated in a small round table with an extendable exhaust pipe directly overhead to suck up fumes from the BBQ. It helps us eat our food without crying like little girls from the smoke in this enclosed restaurant.

Superstar K Korean restaurant has a simple,  no-frills interior with blank black walls meant for people to write comments and dubious phone numbers with chalk. Still far away to filling up the wall though, as people are probably too busy eating than scribbling on walls.

After ordering, the usual Korean appetizers (Banchan) arrived- Kimchi,  Myulchi Bokkeum (멸치볶음) fried anchovies, some other vegetables I don’t really care for, and my love affair that night-the steamed egg in hot pot Gyeran Jjim (계란찜). It’s kind of like the Chinese steamed egg, but comes piping hot and seasoned with a good stock. I ordered ANOTHER steamed egg (extra $).

These accompanying dishes are traditionally free of charge, you just pay for the mains and drinks. Oh yea, we also got the rice and wheat alcoholic beverage Makgeolli ($20). The milky, off-white, semi-sweet Makgeolli in Singapore is mostly just imported from Korea in plastic bottles. This drink has been a staple of farmers since times of old, and I love how easy it is to drink compared to Soju. Oh, it’s cool that they bothered to pour it into a kettle, which you then serve into individual bowls to drink like a Korean king. Trying to cram everything into the small table with the BBQ grill in the centre was logistically challenging and some of the food had to be placed on another chair. Starting on the grill was the Pork Belly BBQ ($18).  The waiter helped us spread our pork belly and basically cooked it for us, coming back to flip the meat when it was about done. This was supposedly how they have serviced the BBQ meat for my friend every single time. I’m a bit paranoid though, because there’s bound to be times where they forget a table due to the sheer number of customers and their meat burns. There were times I was itching to flip the meat over because it was starting to burn and had to summon the waiter over. I didn’t really like leaving the fate of my BBQ meat in the hands of others, but my friend insisted this was part of the service.

After the meat was cooked, they used scissors and cut it into slices for us. Ok, the service IS pretty good. The pork belly was fatty and juicy, going well with the rice. Oh yes, culturally in Korean you would eat the meat wrapped with lettuce and garlic/condiments, but I preferred not to contaminate my pork with vegetables.

Small tip: grill the kimchi on the BBQ as well, it gives a crunchier bite and a more flavoured kimchi. 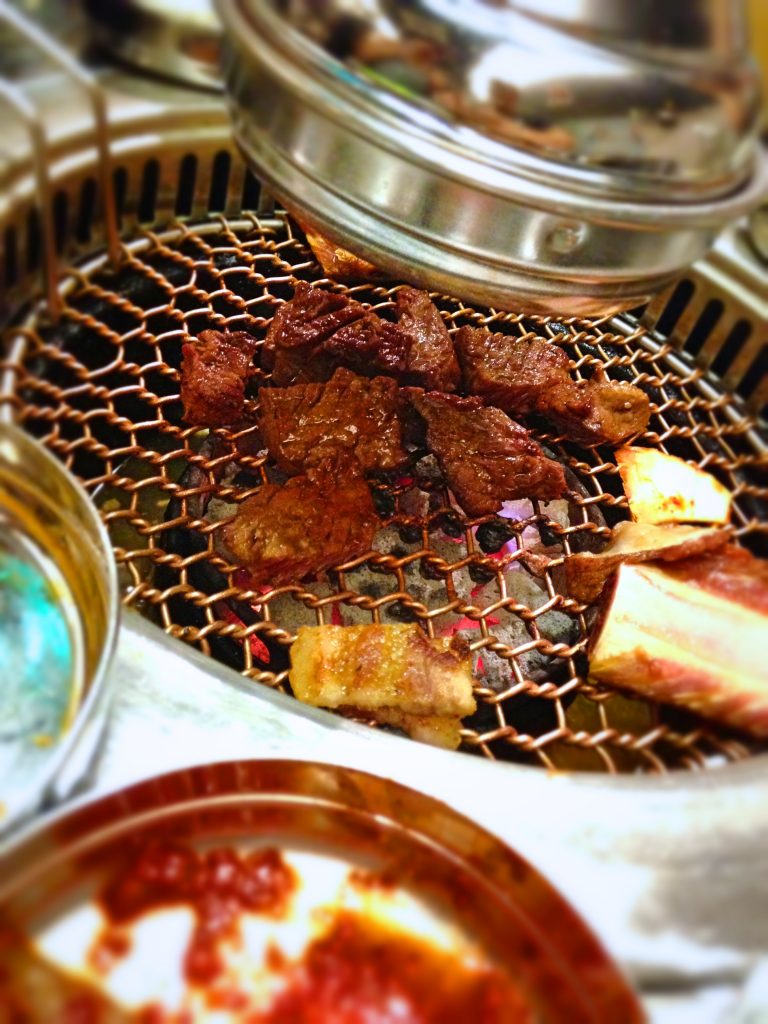 After we were done with the pork belly, the waiter changed the metal grill to put in the Grilled Beef Ribs ($28). Same worry about burning my beef, but this turned out fine as the alert staff flipped the meat on time. I was probably staring at him with my crazy eyes a lot. Very nicely marbled beef, although probably not as much as the picture on the menu depicted. Slightly more cooked than I liked, but still it was a great cut to begin with. BBQing is not my first choice of cooking beef, as the fire is not even and there are many shaky variables that could overcook it easily.

We also ordered the Seafood Pancake ($25) and Kimchi Stew ($12) which turned out to be too much for us to finish. I always seem to go overboard on stomach estimations. The seafood pancake was way floury and had loads of carbo while lacking in seafood. It was pretty plain and not what I would recommend ordering. The Kimchi stew on the other hand, was one of the best kimchi soups I’ve tasted. What’s inside is really simple, just tofu, kimchi and glass noodles, but the broth was strong in flavour with moderate spiciness. You must try this.

Overall Superstar K Korean BBQ is quite an authentic casual atmosphere and more expensive than 2D1N Soju Bang (Ssikek), as well as not being a buffet, but I would much rather pay a little more than queue for hours. The meat quality used are also good cuts well worth the price.

Korean staff hospitality is also of high standards, and are generally well trained. And my friend insisted I add in the fact that you don’t stink of BBQ after eating at the restaurant, unlike 2D1N Soju Bang. Excellent ventilation which definitely warrants a repeat. Avoids the rowdy, teen K-pop wannabe groups as well. I recommend Superstar K over Big Mama Korean restaurant as well.