Food Showdown: Birds Of Paradise VS One Stone Three Birds – Who Has The Better Gelato?

Having stayed in Singapore all my life, I’ve learnt to cope with the sweltering weather. Besides the aid of air-conditioning, I also managed to pull through with the help of sweet and refreshing gelato.

Let’s take a look at two gelato stores, One Stone Three Birds and Birds Of Paradise—no pun intended. After I’ve tried both stores, I found that the flavours are quite similar and can be compared.

Even though Birds Of Paradise is a well-established gelato chain, I wouldn’t rule out the quality of gelato served by One Stone Three Birds, as much as it’s a heartland store. 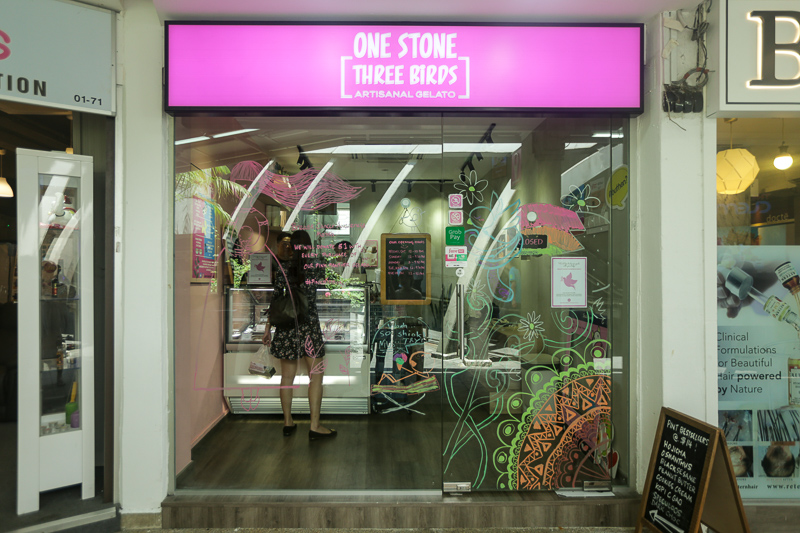 One Stone Three Birds is a neighbourhood gelato shop located just a stone’s throw away from the Clementi train station. The store is extremely easy to access and convenient, especially for those who stay in the vicinity.

The other gelato brand that I adore is Birds Of Paradise. Known for its botanical-inspired flavours, Birds of Paradise is a Michelin-recommended ice cream. The owner was highly inspired to create ice cream flavours for quite some time and had begun experimenting with different flavours, which is how we now have healthy and botanical-like flavours. The brand is well-known and well-loved by many and has recently opened up their second outlet at Jewel Changi Airport One Stone Three Birds’ interior had lovely pink walls, neon doodles on the glass doors and neon lights that gave the environment more vibrance and a slightly whimsical touch.

When I visited the cafe, I was overwhelmed by the selection which ranged from lighter flavours like Fior Di Latte (“flower of milk”) to richer ones like Dark Chocolate Therapy. 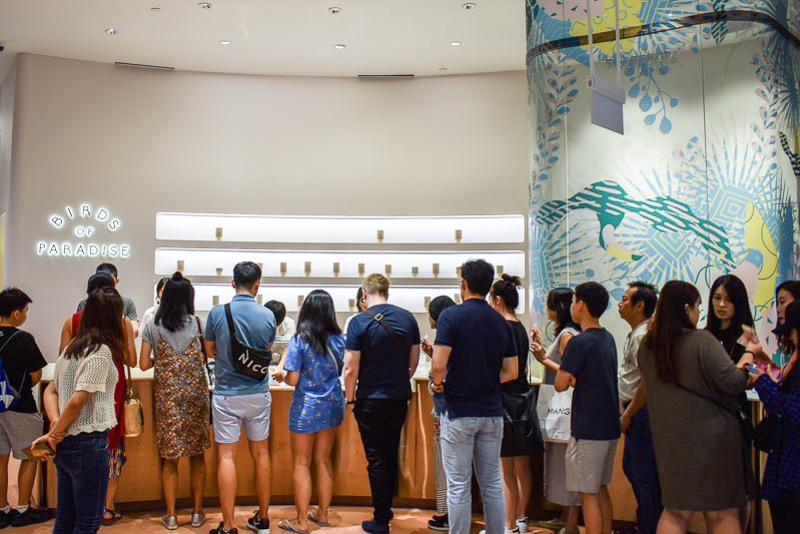 On the other hand, Birds of Paradise was decked out in a lovely neutral colour and flora and fauna stickers that bring to mind the brand’s theme and ideology. Birds of Paradises focuses on more natural and botanical-inspired flavours, which means infusing herbs and spices into the gelato.  I was also very pleased with how minimalistic and aesthetic-looking the shop was.

Out of all the flavours, I decided it was imperative to try flavours that would provide a better basis of comparison for both shops. The first one I tried was the Kopi C Gao (S$3.80/scoop) as a comparison for a caffeinated flavour at Birds Of Paradise. The Kopi C Gao was extremely decadent, as the name suggests—it was indeed very potent and gao (thick and concentrated), mixing in the same kopi c gao ingredients (evaporated milk and extra ground coffee) you’d usually find at local hawker centres. 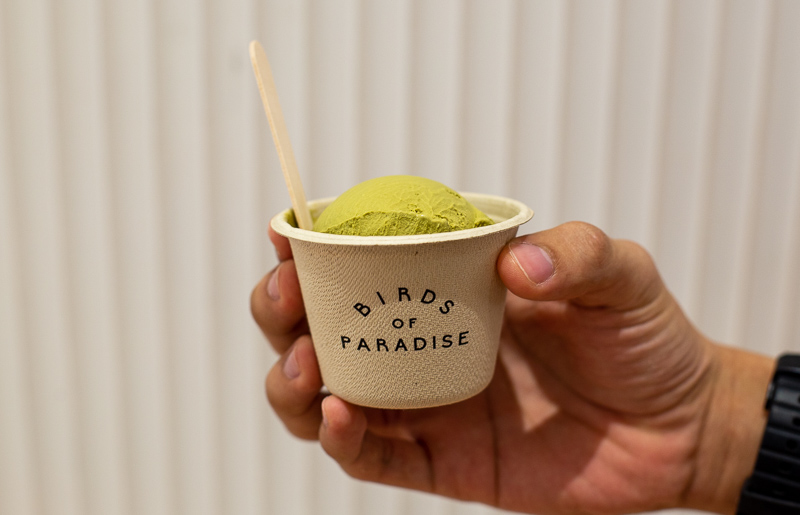 To make my comparison with One Stone Three Birds’ Kopi C Gao, I tried to pick something with caffeine and the closest flavour available at Birds Of Paradise was the Hojicha (S$4.70/scoop).

The Hojicha was extremely potent and slightly too bitter for my liking—perhaps there was too much hojicha powder added into the mix. I was definitely expecting a milder and creamier gelato so this scoop disappointed me quite a fair bit. I’m a hojicha fan and this really didn’t live up to my expectations. 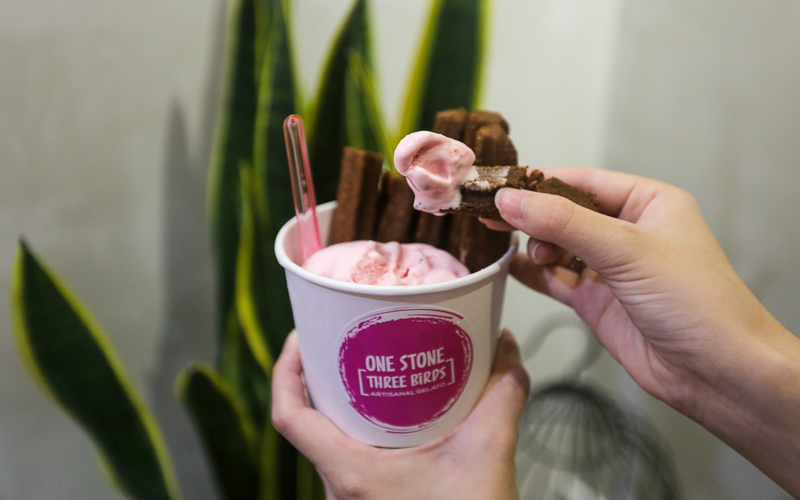 The other flavour I tried from One Stone Three Birds was the Pink Panther (S$3.80/scoop) which is made with delicate rose extract and lime zest for that extra zing. The Pink Panther was notably smooth and aromatic, and the rose extract wasn’t too overpowering on the palate. I’ve always been a fan of rose-infused desserts and this one brought me to “rose paradise”. 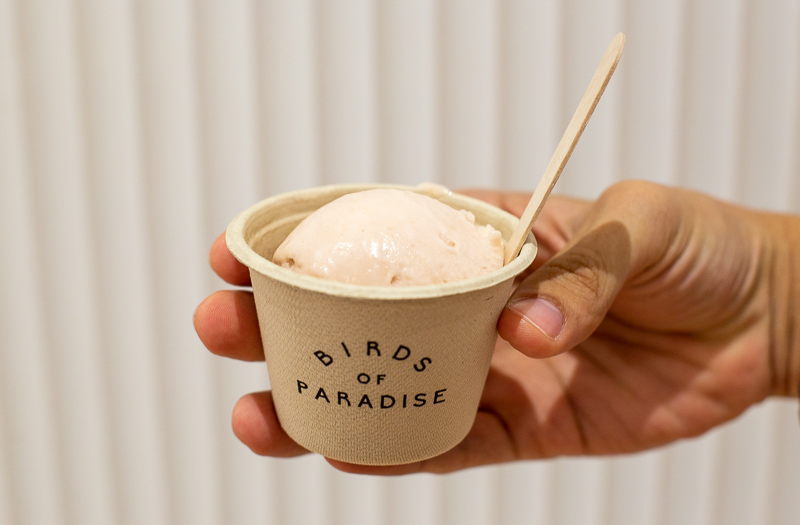 The other gelato flavour that I tried which was a close comparison to One Stone Three Birds’ Pink Panther is the Peach & Rose (S$4.70/scoop). I personally felt that the peach was a little too overpowering and overly sweet for me. The rose scent wasn’t as strong as I wished it to be and was slightly disappointing. Perhaps, they could make the peach flavour slightly more tart to accompany the sweet rose. Out of all the flavours from One Stone Three Birds, Yinn’s Osmanthus & Chrysanthemum (S$4/scoop) is my absolute favourite. This gelato flavour is named after one of the store’s customers, who recommended this blend to the owners.

The gelato incorporates bee pollen and wolfberries (goji berries) that were soaked in honey. I’d say that this stood out to me as the healthier choice but it didn’t feel like it was lacking in sweetness. It was super refreshing and light which I prefer, when it comes to gelato. As for Birds Of Paradise, the flavour that stood out most for me was definitely the White Chrysanthemum with Cacao Nibs (S$4.70/scoop). The chrysanthemum flavour was so light and refreshing, it was as if I was drinking a cold cup of chrysanthemum tea. The cacao nibs were quite a creative touch and gave the smooth gelato a lovely crunch. 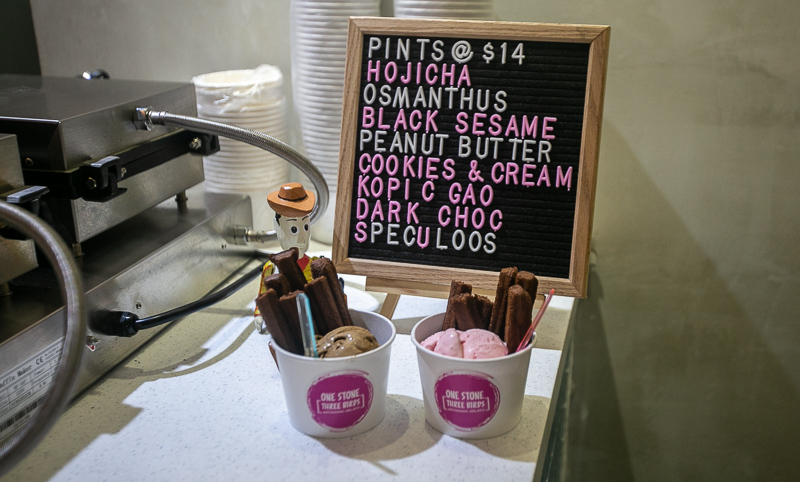 Instead of merely having your gelato scoops in cups, customers can also opt for One Stone Three Birds’ unique house-made Waffle Sticks that are served alongside each scoop of ice cream. One Stone Three Birds makes their waffle sticks with a light and fluffy waffle batter as an exterior layer and a fudgy brownie batter for the interior.

Birds Of Paradise also has its very own cones as well. Not only are the gelato flavours inspired by nature, the cones were created with the same ideation. The Cones (additional S$1) are infused with thyme and have a lovely crunch to it, which is a good accompaniment to the luscious gelato scoops.

As a whole, after comparing the two gelato places with similar flavours in mind—chrysanthemum gelatos, rose gelatos and caffeinated gelatos, I’d have to crown One Stone Three Birds as the winner for me.

Have you tried both places, and which one would you choose? Leave us a comment, and let us know—or if you have any gelato places you think we should try, share it with us too! Kumoya x We Bare Bears: Pose With Your Favourite We Bare...