As vulgar as the name may sound, Fook Kin actually comes from the Chinese word “福劲”. Though it’s newly opened, people can’t help but flock over to Killiney Road for one of the best roasted meats.

Together with the Fat Boy’s team, Fook Kin is a collaboration with The Muttons from Class 95 FM and Roast Paradise. The restaurant opened for service in September 2o18, and it’s doing well with a steady crowd.

Roast Paradise started off as a stall in Old Airport Road Hawker Centre, selling premium char siew (barbecued pork) and siew yoke (roasted pork belly). We got to try them at their newly opened restaurant! Adopting a Chinese concept, the restaurant’s signboard included the Chinese words as well. The exterior of the restaurant had traditional foldable gates like the older stores in Singapore, giving it a touch of nostalgia for the older generation. 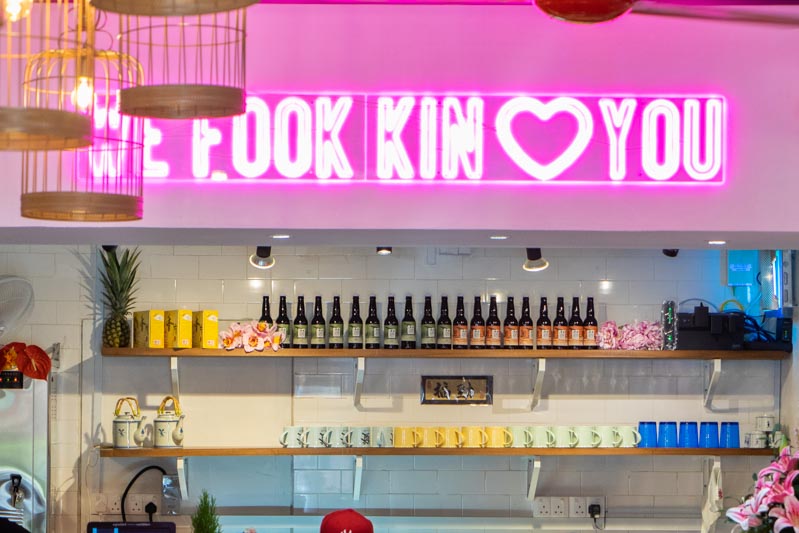 But upon entering the restaurant, the neon lights reminded us of a modernised bar, which might be more attractive to the younger crowd. 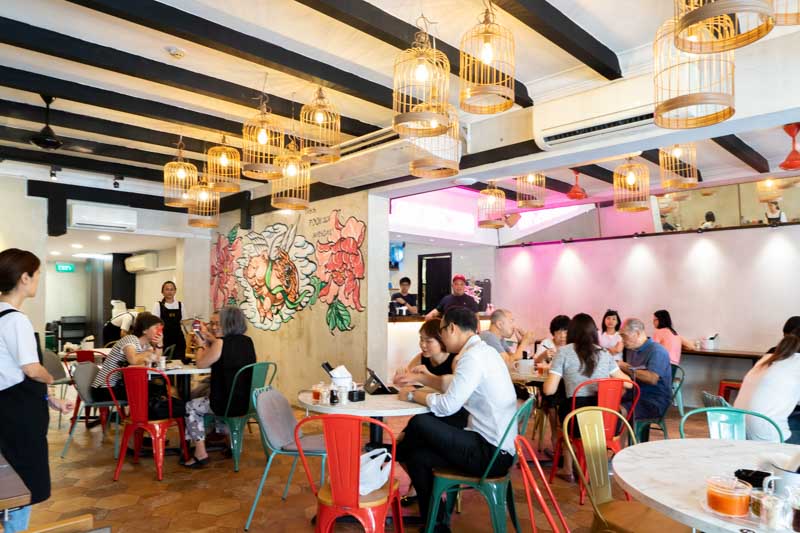 Apart from that, there was a combination of old school and modern tables. Filled with brightly coloured chairs with a mix of round marble tables and long wooden tables, the place felt contemporary yet with a touch of rustic. 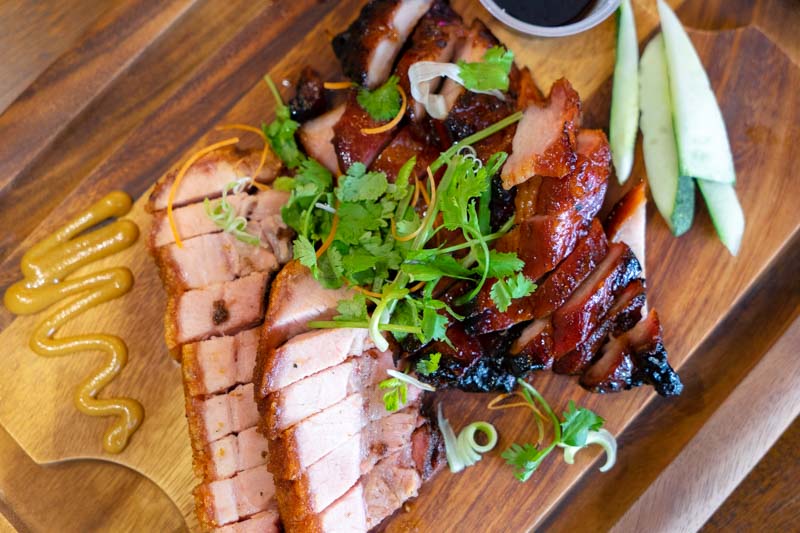 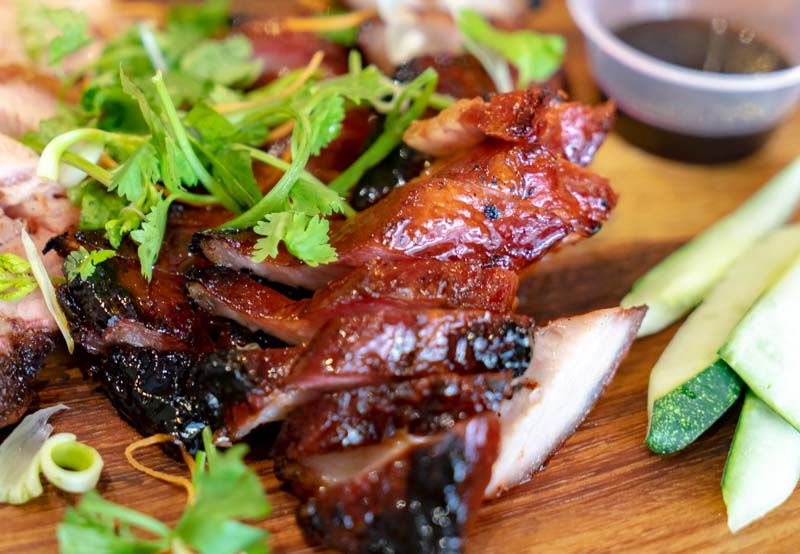 Fook Kin does their char siew quite differently from others, using a method of marinating and roasting it alternately. The char siew was slightly sweeter than regular versions and had a pronounced charred flavour.

Upon taking the first bite, I noticed the crispy exterior and tender meat. The meat to fat ratio was also just nice, giving it a nice buttery finish but wasn’t too overwhelming. It’s really good even on its own, though you can also enjoy it with their secret sauce and a bowl of Fragrant Rice (S$1.50++). 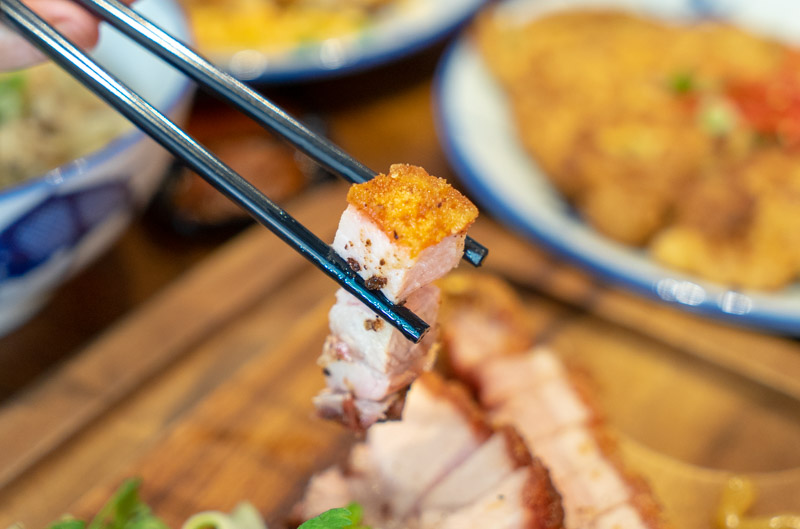 The siew yoke did not disappoint as well. Initially, seeing the glistening oil on the skin, I thought it wouldn’t be crispy. Yet as I sank my teeth into it, the pork skin crackled loudly.

Marinated overnight and roasted at a temperature of 400°C, the siew yoke had crispy skin while retaining the juice and sweetness of the pork. The sweet and savoury mix of the pork balanced out when it’s dipped into the mustard. I must say, this is one of the best siew yoke I’ve tried. 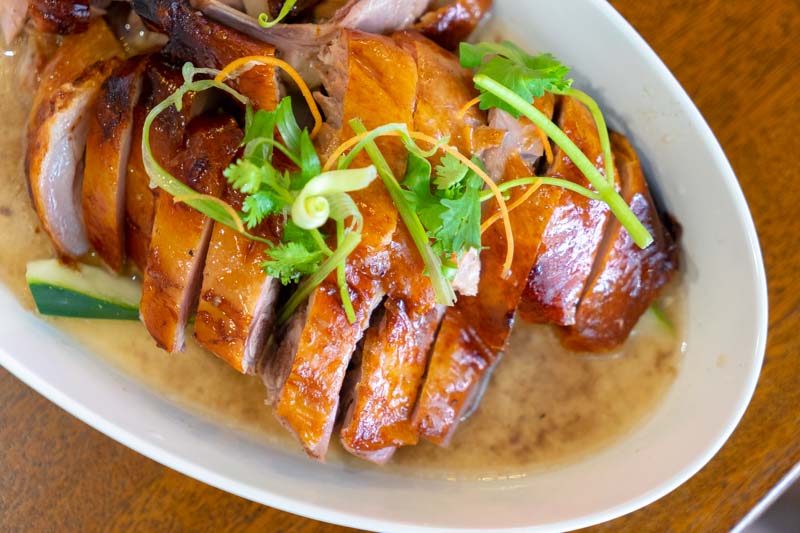 Apart from char siew and siew yoke, Fook Kin serves up a mean Roast Duck (S$16++) as well. Unlike most places, Fook Kin serves theirs with an option of two sauces: Angelica Herb Sauce (Dang Gui) or Western Peanut Sauce.

We had the lighter option of Angelica Herb Sauce (Dang Gui), which was robust and gave the roast duck an earthy flavour. 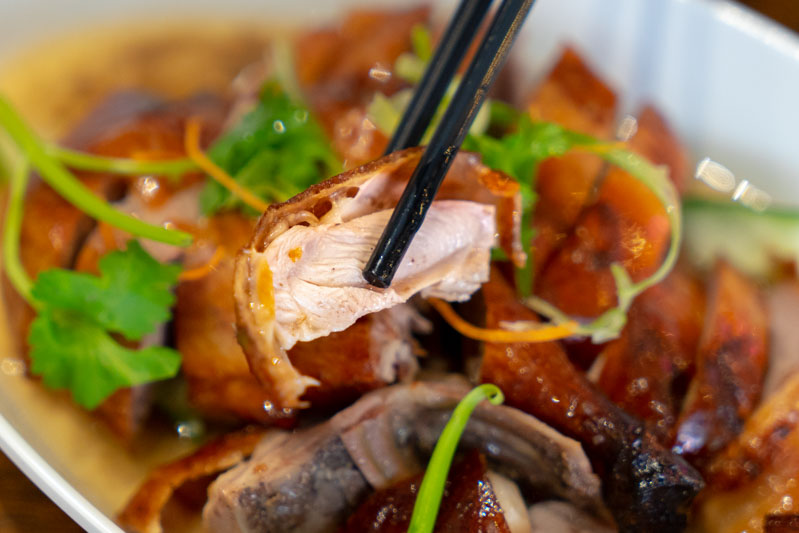 As a roast duck lover, I couldn’t resist taking the first piece quickly. The herbs and spices permeated within the tender meat, yet it did not overpower the natural sweetness of the duck. Having roasted meat and duck on its own might be slightly too much for the palate, so I would recommend for customers to have it with a bowl of Noodles (肉碎面) or Rice (S$1.50++ each). 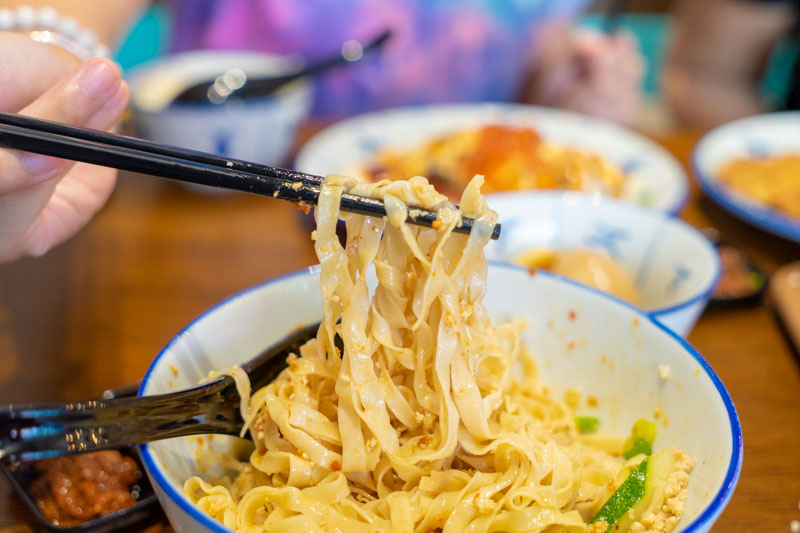 I loved the noodles, which was tossed lightly with garlic oil and topped with a generous amount of mincemeat. Springy and light-flavoured, it’s the perfect pairing for their char siew and siew yoke. 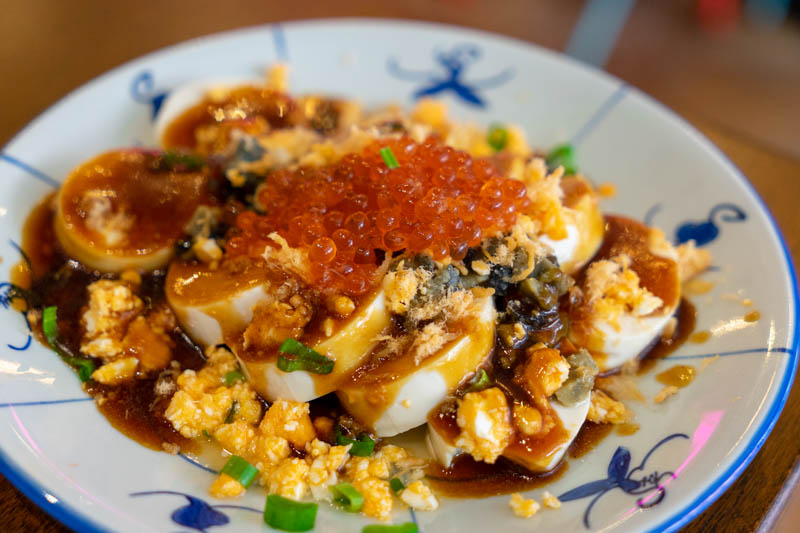 Fook Kin also offers a small range of side dishes to accompany their roasted goodness. We tried the Triple Happiness (S$9.80++), which is a crowd favourite. This dish came with century egg, salted egg and a spoonful of salmon roe over soft cold tofu.

This is Fook Kin’s version of Pitan Tofu (Century Egg Cold Tofu). Wanting to make the dish different, they added salmon roe to give more texture to the dish. Each mouthful was also refreshing, and helped to tone down the oily roasted meat. 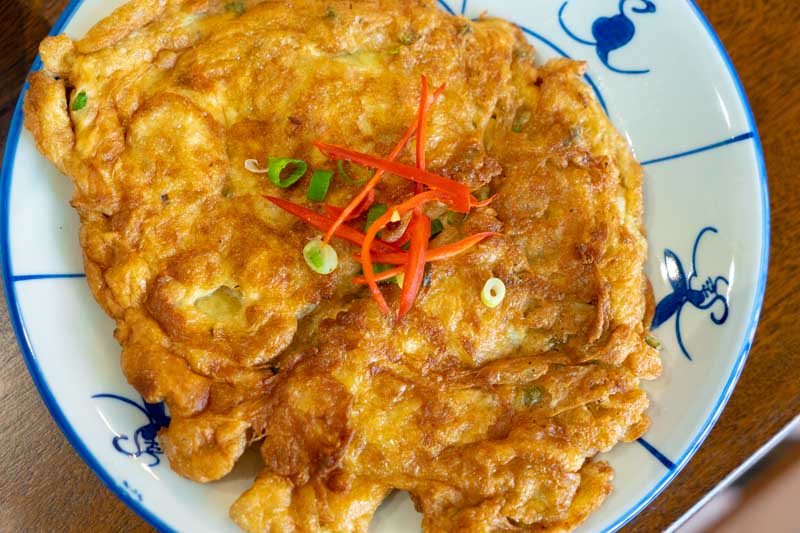 Another egg dish that we tried was the Fluffy Omelette With Cai Po (S$8.80++). The cai po (preserved turnip) added a crunchy texture to the fluffy omelette and gave the dish a savoury and sweet finish.

Cutting into the omelette revealed a warm and soft centre. It was not too greasy, and it is great for sharing! 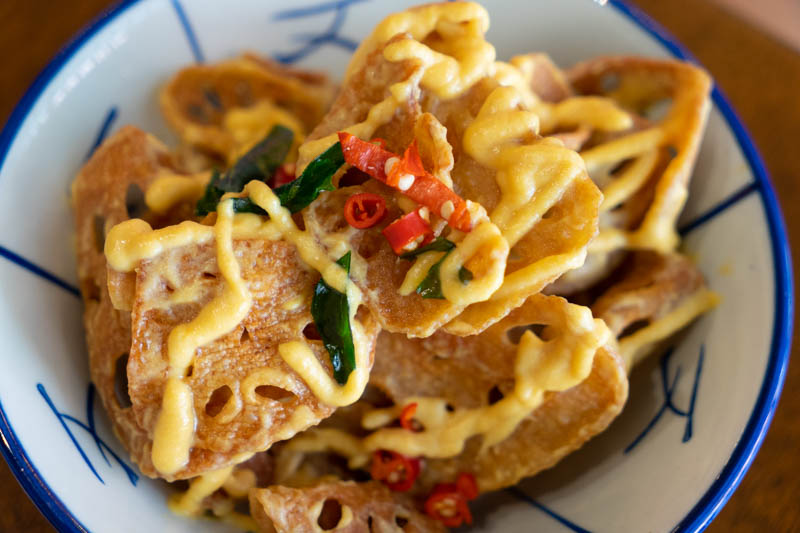 Who knew salted egg yolk and lotus root could be such a good combination? It’s definitely a great appetiser to share with your dining companions! This was one of my favourite sides and I couldn’t resist reaching out for more.

If you’re ever at Orchard and need some good roasted meat to fill your tummy, it’s got to be Fook Kin! 10 Supper Spots In Orchard Road That Close At Midnight Or...