Fruce, meaning fusion of fruits, is a cute little kiosk that sits in the basement of Wisma Atria at Orchard Road and serves what they affectionately term as dessert beverages.

If you aren’t entirely sure what that means, just take a minute to think about your favourite dessert — did D24 durian, mango sago or pumpkin cake come to mind? And what if I told you that you can have them all just as drinks, straight out from the cup? Aiming to encapsulate the goodness of desserts into beverages, the homegrown creators at Fruce draw their inspiration from local flavours, but put a Japanese twist on their products.

In order to keep things fresh, the team at Fruce work hard to switch things up every few months menu-wise, and we learnt that they’ve just launched their latest menu around mid-April 2018. 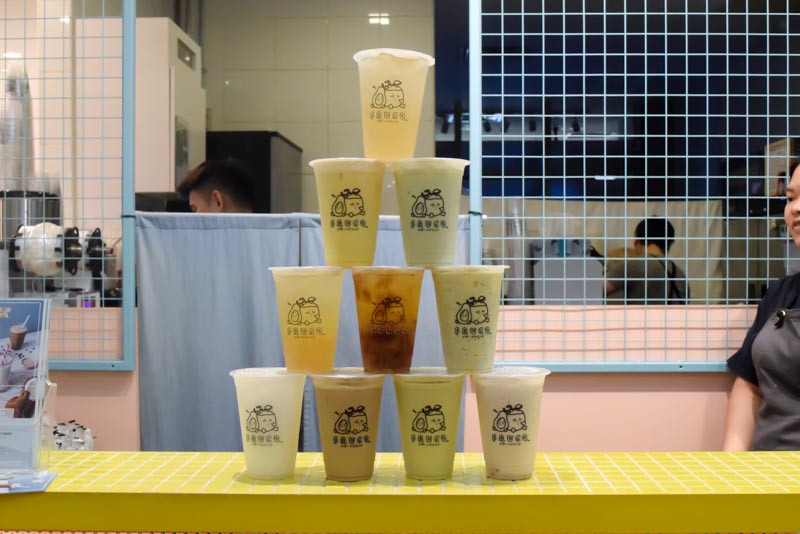 Shoutout to the owner for being incredibly welcoming, and prepared a spread of 10 different drinks for us to try. Their sugar level continuum goes by Original, Reduced, Minimal and Nil. There’s also the option of less ice ($0.50) and no ice ($1).

All drinks served to us were prepared with normal ice and reduced sugar, except for the White Peach Tea and Coconut Fruce, which came with minimal sugar instead. It was obviously difficult to contain our excited selves from stuffing our faces with the highly-anticipated drinks, and even harder choosing which one to try first. But since the Avocado Coconut ($4.50) was what many rave about, we had a go at that first.

Not only did the coconut help to balance out the creamy avocado, chewing on the Petite Sago ($0.50 for a medium cup, $0.70 for a large cup) topping was pure fun. So overall, the Avocado Coconut was thick but still kept light, and gave us much to look forward to with each sip. We went in for the Coffee Nagoya Milk Tea ($3.70) with added Vanilla Ice Cream ($0.70 for a medium cup, $0.90 for a large cup). This was Japanese coffee infused with three milk teas — think Yuan Yang, but better.

The coffee was really fragrant and made better with the Vanilla Ice Cream, which gave the beverage an added creaminess as a whole. However, it can get a little sweet so if you’re planning to top it off with ice cream then I suggest you go for the minimal sugar instead. The Durian Avocado ($5.50) was the most expensive drink on the menu, and only came in a medium cup. Two of the most luxurious entities in the fruit kingdom would be the durian and avocado, and you can now have them both in the same drink!

While this treat might allow you to indulge in your guilty pleasures, it can get a little heavy halfway through the cup, especially because both ingredients are so creamy. Perhaps it’s better to just split it with a friend? We interspersed the heavy drinks with the clear Golden Kiwi Okaru ($4.50) which was a refreshing change for our palates.

There were little kiwi bits floating around in the drink, which spruced things up a little compared to having just plain tea. I can see where they were going with this drink, but after having tried many different renditions across different brands, I still find that kiwi usually doesn’t do that well in drinks and ends up tasting a little strange. This was the D24 Durian Pandan ($5) which sounded like an unlikely duo at first considering how durian and pandan each have such distinctive and strong flavours. I had the honour of taking the first sip out of this one — what would be the sip that changed the game for me.

Here’s a disclaimer: I don’t even like durian, but this was love at first sip. The durian flavour wasn’t pungent or overpowering, and the fragrance of the pandan really helped to gel the whole drink together. Think rich and creamy yet fragrant; and you can get it all just for $5. Another of their signatures included the Coconut Fruce ($4.80) which was probably the most classic thing on their menu. This was the quintessential case of the WYSIWYG – what you see is what you get. It literally is fresh coconut water that has been filtered for four hours, with added coconut flesh.

Don’t look down on its simplicity though, because this beverage is the epitome of the saying, “less is more”. We could appreciate the coconut’s natural flavours because there weren’t other elements to distract our taste buds. You’d be surprised at how good plain coconut can taste. We had our palates cleansed a little with the White Peach Tea ($3.70) and Pink Lychee Tea ($3.80), from left to right. My colleague swears by the White Peach Tea, and buys it so often that the owner of Fruce knew her order at once upon seeing her.

Both teas were a little on the sweet side for me so I would recommend to get them in minimal or no sugar. The plus point about the Pink Lychee Tea was that it came with complimentary lychee jelly, so there isn’t a need to add more toppings! Taro milk tea isn’t uncommon in the world of bubble tea, but even as someone who isn’t a fan of taro, I’ve to say that the Homemade Taro Fuzato ($4.50) is truly special. Unlike most places that use taro syrup, Fruce makes this drink from real taro and it’s easy to tell from the little taro bits bobbing around in the cup.

Yam-flavoured desserts can get quite cloying after having too many sips, but this cup was particularly light and wasn’t too sweet. 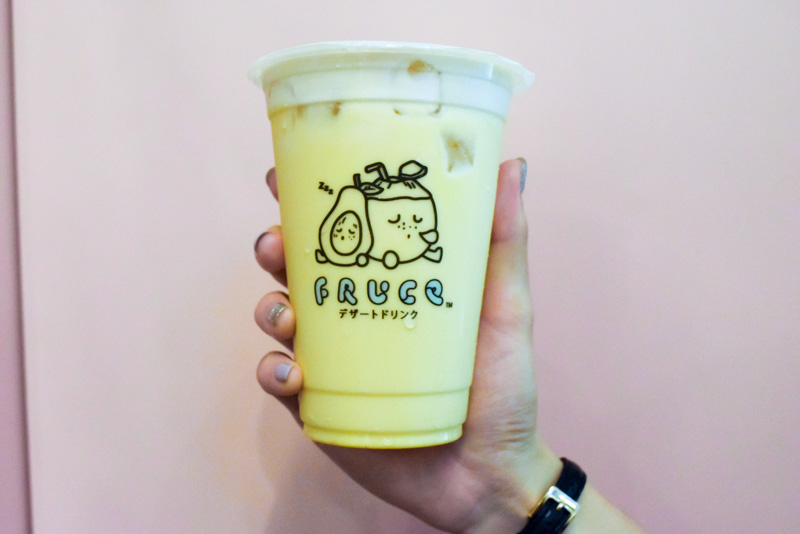 If you’ve ever eaten a cake and wished that someone would make a beverage version of it, then it’s the Pumpkin Fuzato ($3.80) you’re looking for. The staff at Fruce also threw in some Coconut Ice Cream ($0.70 for a medium cup, $0.90 for a large cup) along with it, making the drink even creamier than it already was.

I have to admit that it didn’t really taste like pumpkin in particular, but the first sip immediately reminded me of a slice of cake. So to my sweet-toothed readers, here’s another one to try when you pay Fruce a visit next time.

I know the drinks are a little pricer than your usual bubble teas or kopi pengs, but trust me when I say you’re really paying for quality. I’d gladly treat myself to Fruce’s yummy dessert drinks over subpar milk tea any day.

Give it a shot, and if you’re a Fruce fan too then we can vibe.

HotChic², Turf Club: “It holds the potential for so...