These days, there’s been more focus on health and wellness in Singapore’s food industry, especially with the growing number of juice bars and superfood restaurants.

Here at Frunatic in Palais Renaissance, you can get healthy food even in the fine dining scene. 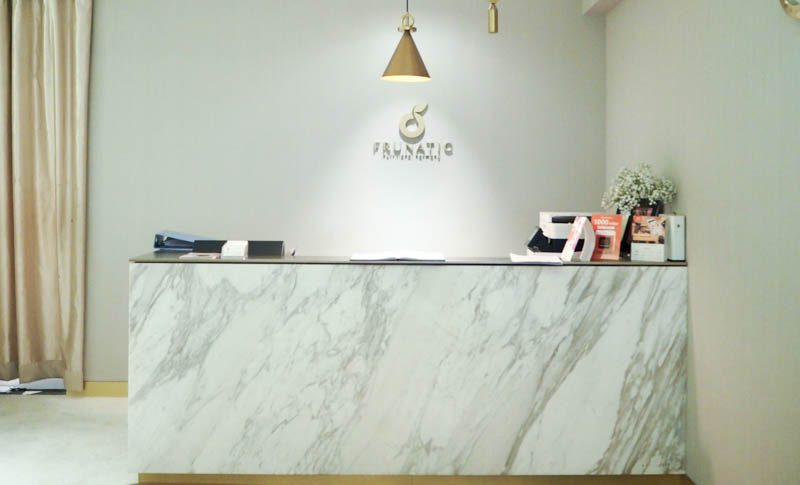 Frunatic endorses food therapy, and they believe in understanding each and every client’s needs before serving them. As such, customers are encouraged to go through a health checkup before experiencing the eight-course omakase meal (from $108++) crafted specifically for your needs.

If you aren’t keen on getting attached to cables for a body analysis, you can pick from their pre-selected eight-course omakase. The choices are Detox, Diabetes, Weight Management, High Blood Pressure & Cholesterol, Digestive Health, Anti-Fatigue, Sleep Inducer, Immunity, Athletic Sports Performance and Beauty. Each selection helps you achieve a different health goal, so pick the one you’re looking for. 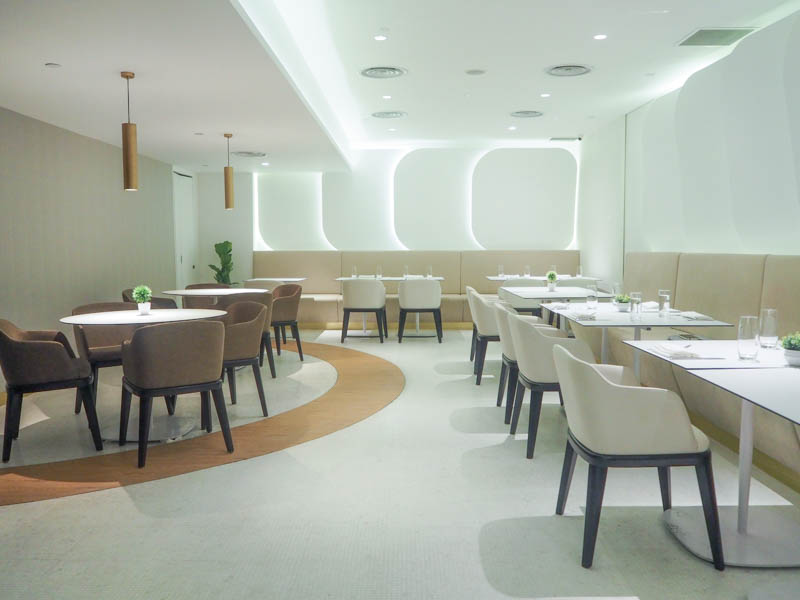 I decided to go through with the body analysis to experience the holistic journey that Frunatic provides.

The body analysis took place at In Out Wellness, next to Frunatic. The results of the body analysis will go through a nutritionist, dietitian, TCM physician and a naturopathic doctor, and finally the chef who will come up with a tailor-made healthy meal. 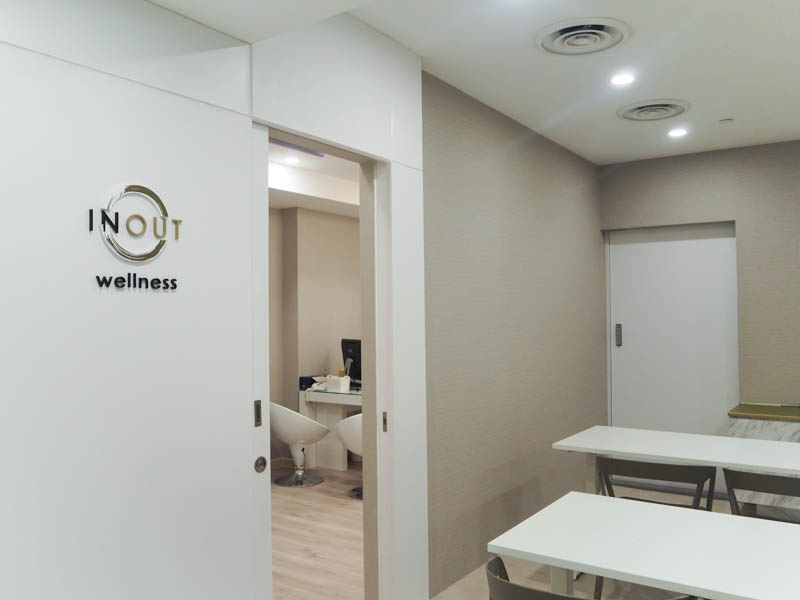 To begin with, I stepped onto a machine that looked like a weighing scale, except that I had to put my hands on two handheld devices. This device will be able to detect your body composition from your BMI to your fat composition, and even the mass of each individual limb.

As a 21-year-old, I had a pretty decent composition, with everything in the moderate range. However, the nutritionist made a friendly jibe that I’m that guy at the gym who skips leg day, pointing out that my legs were slightly smaller than usual. 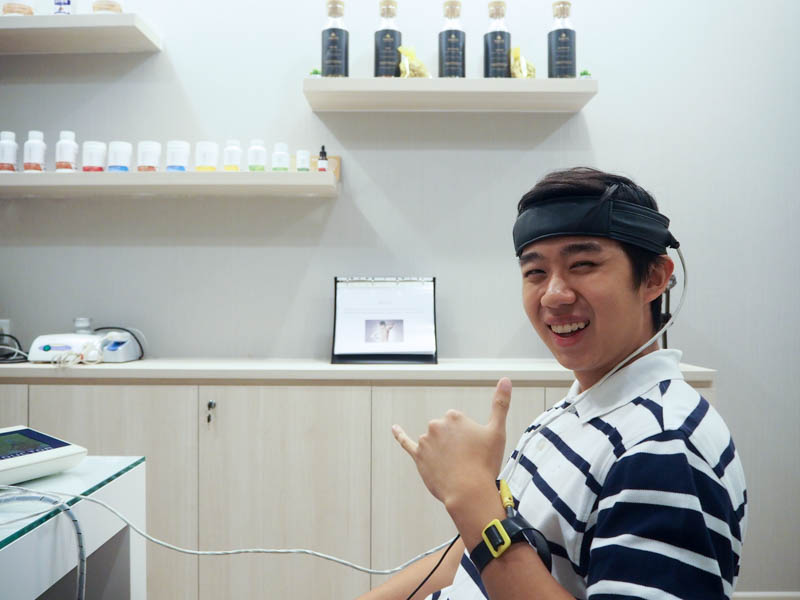 After getting my body composition, I got hooked up to the Eductor Quantum Biofeedback Technology. It apparently sends signals through your body to pinpoint viruses, deficiencies, weaknesses, allergies, abnormalities and food sensitivities.

Surprisingly, despite the stellar results from my body composition, I had several vitamin deficiencies and I’m also a victim of adrenal fatigue. Due to this, my body is very prone to stomach flu, which is pretty accurate since I caught the stomach flu twice in the last six months. As such, I was recommended the Anti-Fatigue course meal. 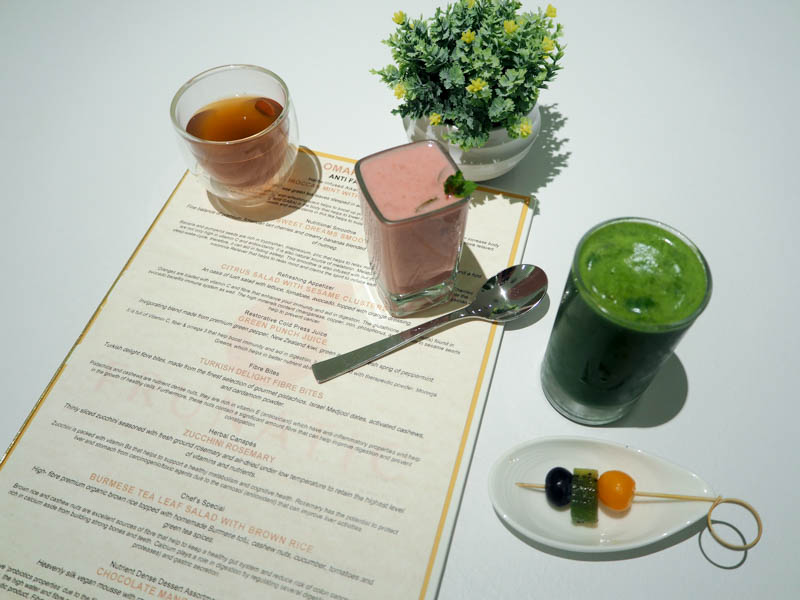 The first dish was the Forget Me Not & Goji Blossom Tea. It was very light in taste similar to chamomile tea, and the alkaline-ionised water made it less acidic. You can barely taste the hints of tea, but the goji berry’s fragrance lingers.

Coming right after, the Sweetdreams Smoothie was a more condensed version of the smoothies you’d find at most juice bars. Its key ingredients are pretty rare, with American tart cherries, bananas, nutmeg and pumpkin seed milk which is rich in zinc, to aid my immunity.

Out of the three, the Green Punch Juice was the most outstanding. It started with a bitter celery scent and taste, followed by the sweetness of the kiwi. There was also the spice of the green peppers and it ended with a minty aftertaste. This fourth dish was an invigorating experience! 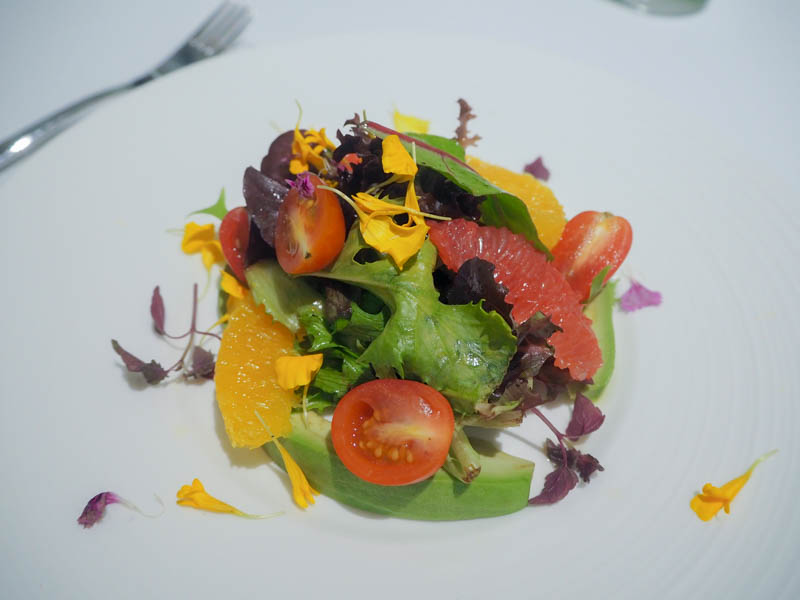 The third course was Citrus Salad With Sesame Clusters, which was a refreshing appetiser. Someone who’s feeling tired would definitely find this a stimulating dish. With the tangy grapefruit flavour and orange slices accompanied by cherry tomatoes, it’s no wonder this shocked my taste buds and woke me up.

The edible flowers like marigold and bachelor’s button also helped to ease me into the creaminess of the avocado. 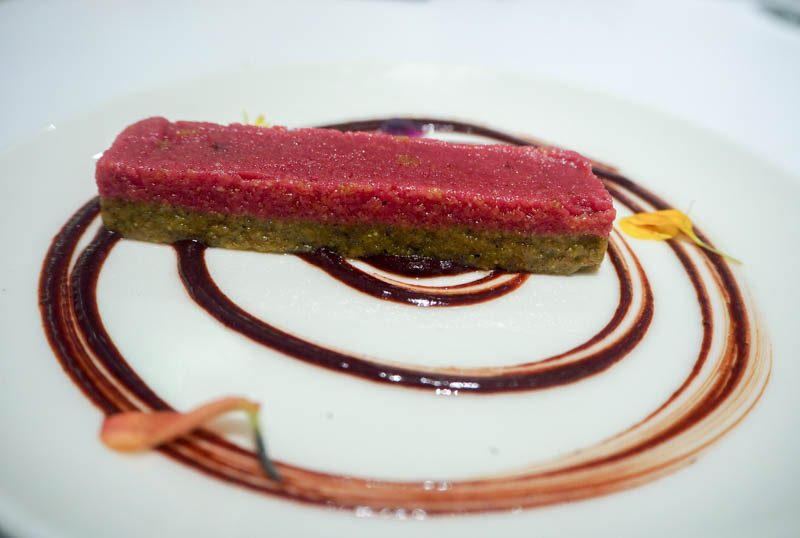 The fifth course of the night was the Turkish Delight Fibre Bites. From far, one may mistake this as a kueh but it actually had the consistency of oats.

The upper layer had a distinct pistachio punch, while the lower deck packed some spiciness from the ginger. Together, they make a robust combination that countered fatigue on the first bite. But with subsequent chews, its energising impact got dulled behind the chewy texture. 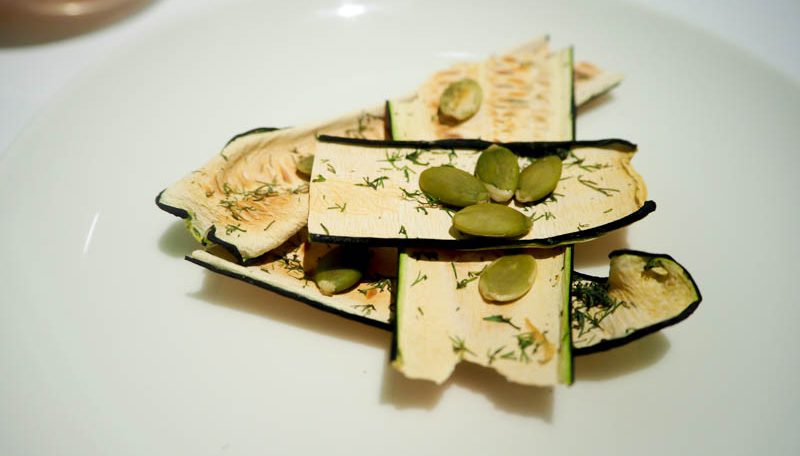 The Zucchini Rosemary had an Asian elegance, as the zucchini skin shavings resembled the Japanese bamboo patterns. Similar to eating cucumbers raw, the zucchini skin had the same raw, bitter taste. But with continuous chews, the skin brought out a light sweetness. 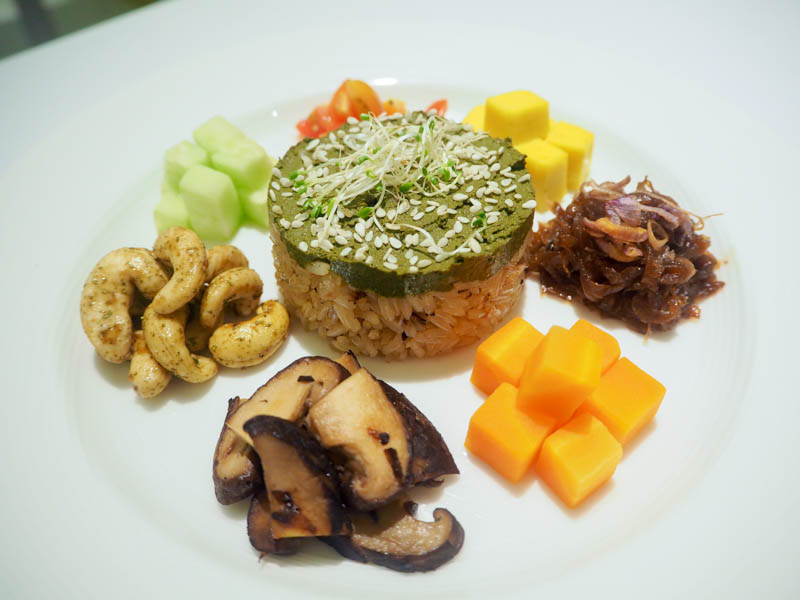 Using the meticulous method of low-temperature cooking, the Burmese Tea Leaf Salad With Brown Rice retained all its nutrients to its fullest capacity.

The top layer of the rice was coated with Burmese tea leaves extract that had the texture of avocado and a light bitter taste. 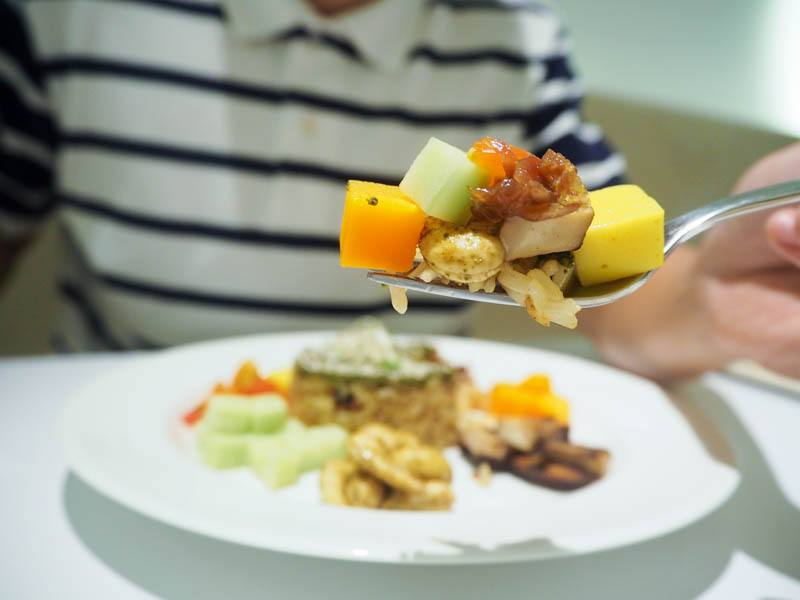 What I loved about this dish was the shifting of textures and flavours like the crunchy almonds and the fluffiness of the tofu, and the sweetness of caramelised onions that faded into the tangy cherry tomatoes.

The only downside was the effort required to pick out the ingredients I wanted for each spoonful, without it toppling over. 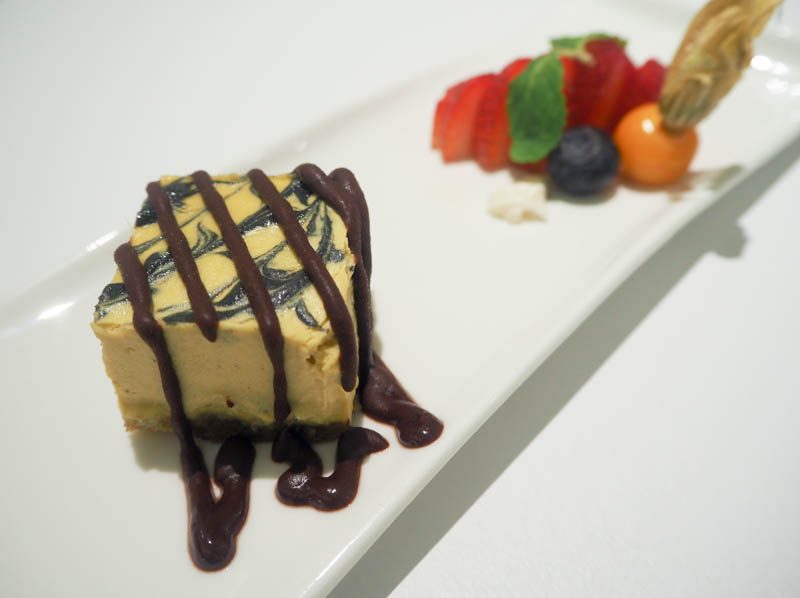 The Chocolate Mango Cake is made with vegan mousse but the texture was more like an ice cream cake. It doesn’t carry the sweetness that you’d expect from ice cream, but it’s indulgent enough for you to want more than just a few spoonfuls.

The base is made of coconut fibre and gula melaka grains that add to the mousse for additional flavouring. Most desserts are associated with being sinful, but I can assure you that you can eat this dessert without a single tinge of guilt set in.

Of course, this meal isn’t supposed to make you feel revitalised immediately. Initially, I had high expectations, thinking I’d be pumped up like after drinking Redbull.

About a week later, I was able to concentrate better at work despite having less sleep than the week before. That’s when I realised that it may have been due to this healthy meal.

According to Frunatic, such high-nutrition meals should only be consumed once a week, or its excess will just be filtered off by our body. And therefore if you’re a health junkie and would wish to keep up such a diet, Frunatic has a meal subscription plan that sends these regular health boosts straight to your doorstep.

It’s tough to explain how much of an impact it has on an individual. But if you’re thinking of giving this a shot, do remember to check on the changes it has on yourself after a week, and I’m sure you may start considering their subscription plan.