French cuisine is oftentimes misrepresented as a dining experience that’s stuffy — entailing a three-hour dress-up of guests putting on their best threads, while servers blanket tables with virgin-white tablecloths.

Not all French restaurants operate as such, and those are the kind that I personally favour. 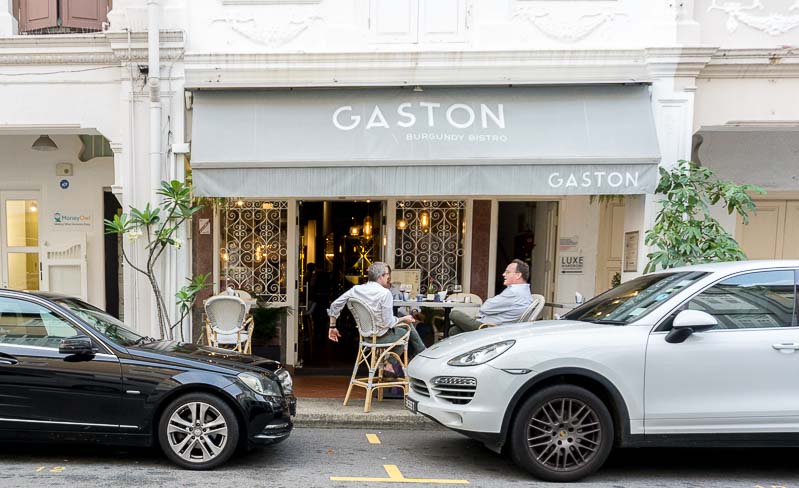 Hearing that Gaston Burgundy Bistro & Wine Bar had just opened, I was eager to dine there. It was mainly because of its homely vibe.

Though with the recent revitalisation of Keong Saik Road, I felt like I needed to check out what the new kid on the block brought to the table. The label ‘bistro’ is very fitting for a place like this, as I entered its narrow corridor and was led to the cosiest corner in the house.

Gaston Burgundy Bistro & Wine Bar was already buzzing by 7pm, and only got livelier as the evening went on. I don’t know if it was something in the air, but I could tell my dining partner and I were in for a memorable experience. 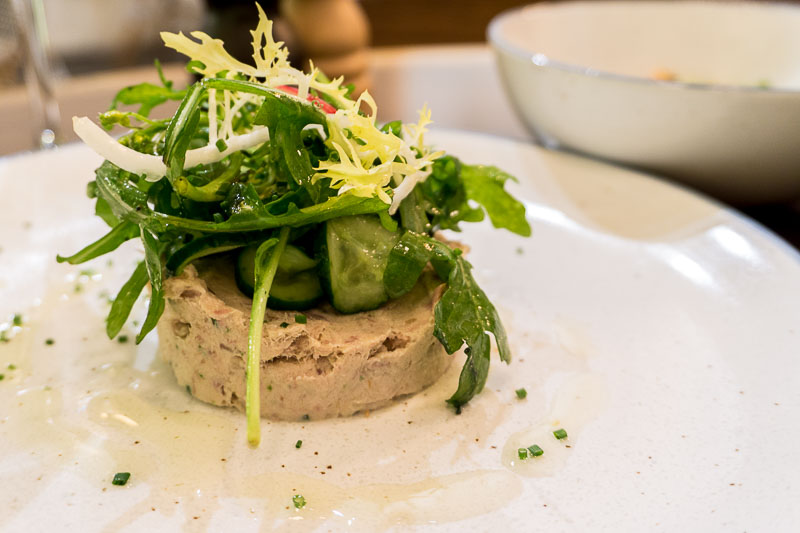 Rillettes and terrines aren’t typically my first choice of starter, but the Rillette de Maquereaux (S$15) is made with mackerel and beyond delicious. I don’t think I’ve polished off fish this eagerly in a while, and even my dining partner, who doesn’t indulge in French food often, fought me off to have the last morsel!

It wasn’t fishy; instead, I enjoyed the natural flaky texture and sweet aroma of this surprisingly refreshing appetiser. Who would have thought a fish as a starter could be something to whet my appetite? Now, you can’t deny yourself escargot (snails) when dining in a French establishment that serves it. It’s one of my favourite appetisers to order, and I’ve been enjoying it ever since I was a kid. Their Escargots de Bourgogne (S$15 for six, S$29 for 12) are different in that they have made it a bite-sized treat.

They’ve done away with the traditional style of serving the snails in their shells. Instead, incredibly buttery, crusty pastry shells cradled the snails in a cover of velvety garlic and butter parsley. The crumble and crunch were addictive; my only wish was that I didn’t have to share this. The Ouefs en Meurette (S$14 for small, S$22 for large) is unlike any French dish I’ve ordered before. It’s a poached egg in red wine sauce with onions, bacon and mushrooms.

The kitchen crew were, however, very kind to omit the bacon at my request as my dining partner had a dietary restriction. Major brownie points! We were advised that the best way to consume the dish was to heartbreakingly slice open the poached egg and stir everything together, before finally dipping the accompanying bread into the viscous mix. 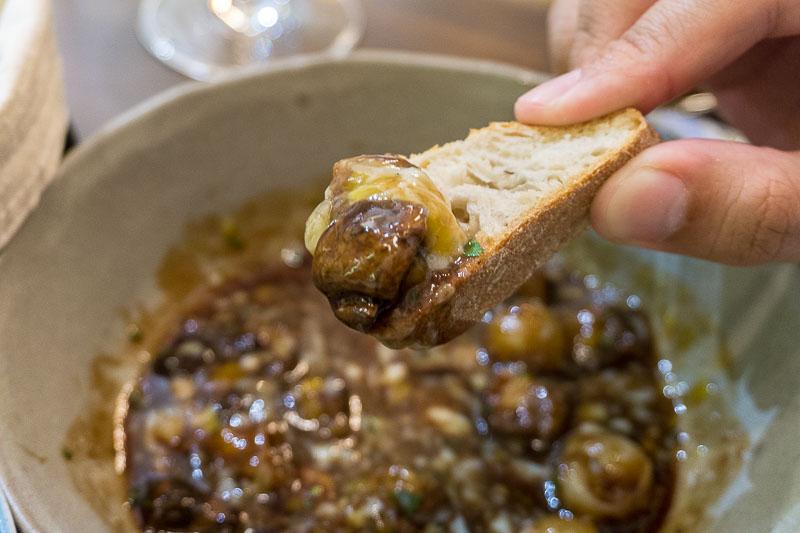 The taste was both familiar and unfamiliar at the same time, reminding me of poached egg with soya sauce, but also heavily-laced with savoury notes and subtle tannins.

The egg worked as a gelling agent to pull all the ingredients together. The result was an earthy dish that caused my dining partner to unapologetically mop up every last drop with bread, spoon and a final lick. Classic Beef Bourguignon (S$32) here is served in red wine sauce and mashed potato. What makes this a delight is that it’s Mdm Daurelle’s recipe (the mother of the restaurant manager and one of the co-owners, Geoffrey Daurelle) and truly tasted of home. 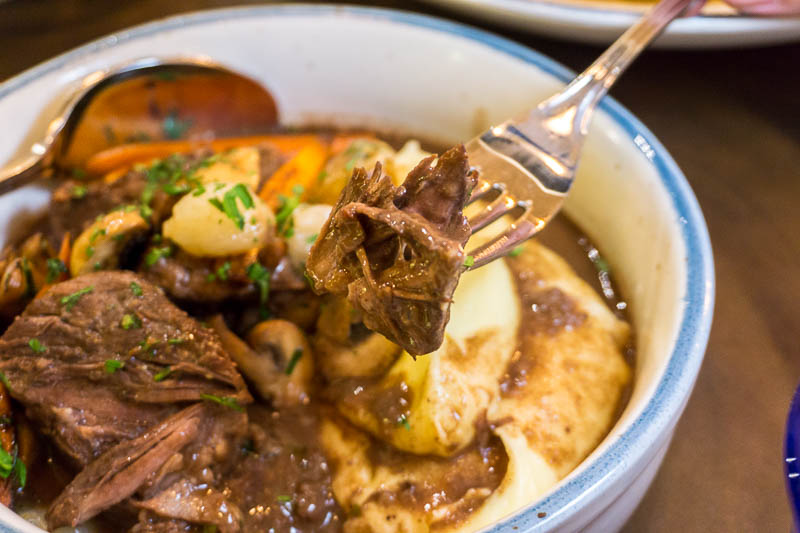 The mashed potato was whipped till airy and silky, while the beef split open effortlessly. When (not if!) I return here, I will definitely be coming back for this. And insisting I keep the entire portion for myself, because sharing it would be a sin.

The red wine sauce was not too thick, still runny enough to seep into every nook of meat and slather itself over the mashed potatoes. It had a hint of acidity that prevented it from becoming too cloying and rich. Poulet Gaston Gérard (S$32) may just be a simple chicken dish to many, but this particular chicken fricassée with a creamy mustard sauce is topped with heavenly gruyere cheese. 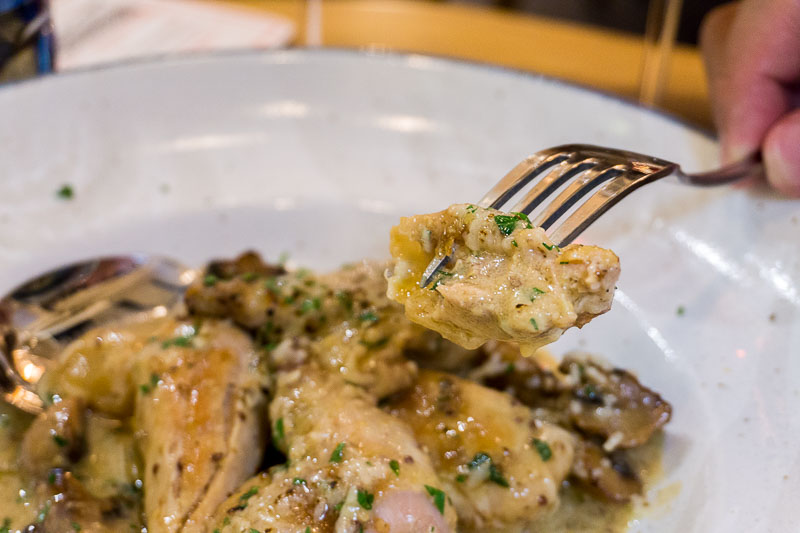 The best part I felt, was that it didn’t taste overly fatty. The chicken was cooked perfectly, and the gruyere just added a great aromatic touch to this quaint dish. As a complement to our chicken, we also had the Leek Fondue (S$8). Just thinking about it makes me recall how deliriously happy I was the moment I had my first bite. It was creamy, cosy and familiar, in spite of the fact that we’d both never had it before.

We were sad that the portion wasn’t larger, but I suppose it served us well as we wanted to ensure we had room for dessert. If you’re looking for something lighter on the palate, the Flan Pâttisier (S$12) is a vanilla French custard pie served with vanilla gelato. With all the heavy notes that we’d worked through, this cleansed our palates and didn’t leave us feeling too full after. 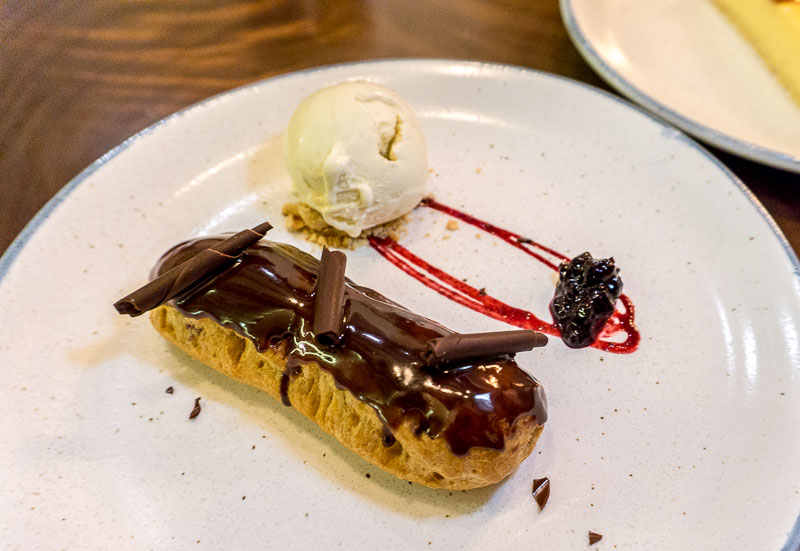 But of course, the chocoholic in me couldn’t keep away from their Éclair au Cassis ($14). This chocolate treat deviates from tradition as it’s piped with cassis custard cream instead. 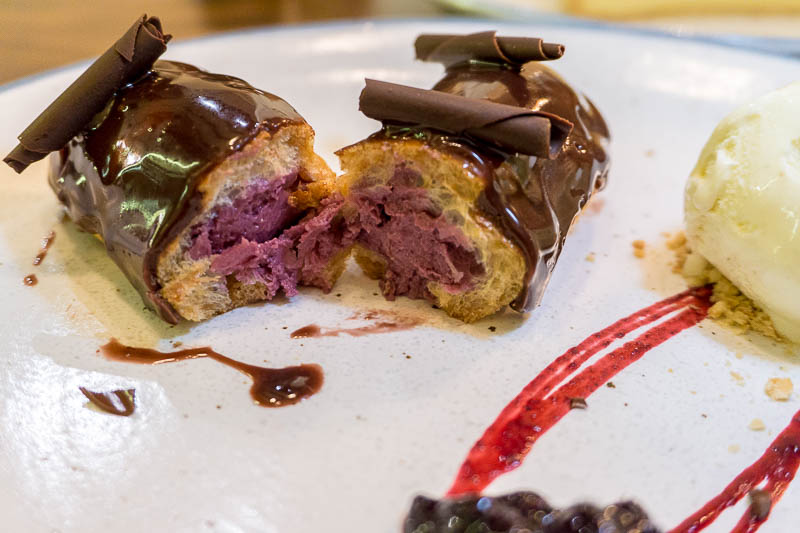 The contrast between dark chocolate glaze and dark berry was intoxicating, and I had to convince my dining partner to allow me to have dibs on the last bite this time.

It felt like throughout the entire dinner, both of us were in a power play to see who was allowed to finish which dish. I’m just glad that my gut feeling prior to dinner was spot on, and indeed, it was a dinner to remember.

It’s been some time since I’ve felt so positive about my dining experience, be it for pleasure or work. So it’s easy for me to say Gaston Burgundy Bistro & Wine Bar is highly-rated in my books!

Previous articleGuma Guma: Baked Sweet Potatoes That You Don’t Have To Queue For In VivoCity
Next articleYobanmian: SG’s 1st Mala You Mian, Bak Kwa You Mian + Pork Floss You Mian & More