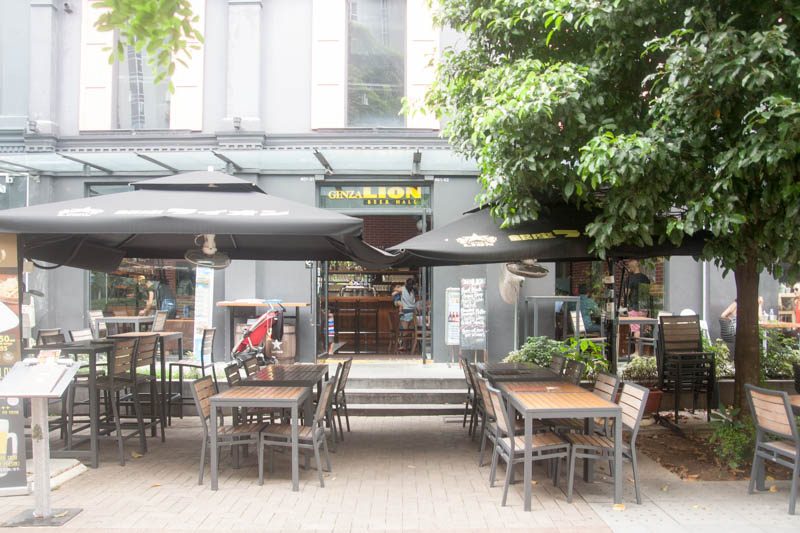 Located along Robertson Quay, Ginza Lion Beer Hall is a restaurant serving Japanese-Western fusion food. Being the pioneer restaurant under the Sapporo Lion group in Japan, the restaurant has since expanded and opened two outlets in Singapore. With half of the restaurant indoors, and the rest outdoors, diners can choose to have a cosy ambience inside or a relaxed al fresco dining experience along the river. For just $60 for adults, and $25 for children, Ginza Lion offers their Order Buffet, which comes with free flow Sapporo beer, red and white wine, and food for a limit of two hours. 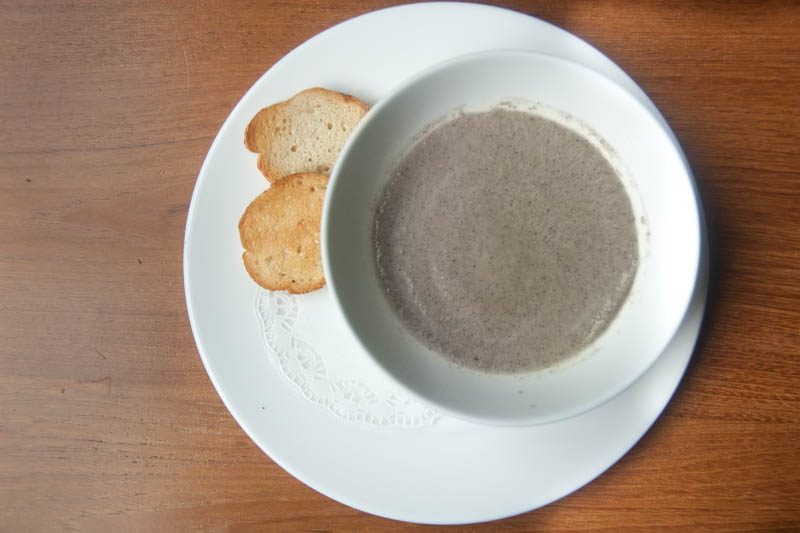 Upon being seated, we were are served a bowl of Mushroom Soup, which comes with two crostini. The soup itself was creamy and flavourful, but it was a little too thick for our liking, resembling more of a mushroom puree than a soup.

Nonetheless, it was tasty and the flavour of the mushroom was not overshadowed by the other ingredients. When paired with the warm toasted crostini, the dish was rather enjoyable. The soup was followed by a Salad, which is a mesclun mix with cherry tomatoes, crispy tortilla chips and a balsamic dressing.

The salad was quite refreshing and the crunch of the tortilla provided a textual contrast to the other ingredients. The tomatoes were sweet yet acidic, whetting our appetites. 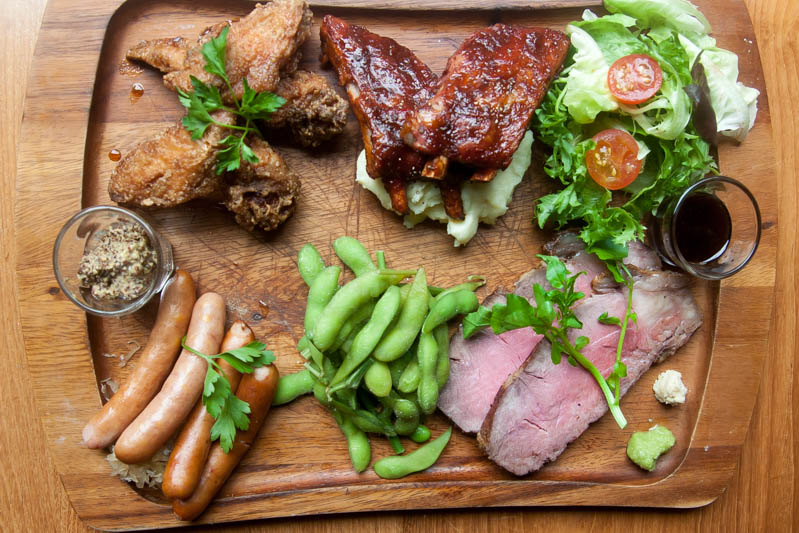 Following that, the Signature Plate was served. The signature plate is limited to one portion per person, which features Roast Black Angus Beef, Sausages, Pork Ribs, Chicken Wings, Edamame, Salad and Mash. Their roast beef, served with wasabi and horseradish, was presented looking pink and juicy. We were told that it was roasted with a far infrared grill to lock in its juices and to keep it tender. On a whole, the beef had a pleasant texture and mouthfeel. However, we felt that the seasoning was uneven and some parts could do with a touch more.

When eaten with the condiments, the slight ‘kick’ of the wasabi and horseradish cuts through the fattiness of the meat, leaving you wanting more. 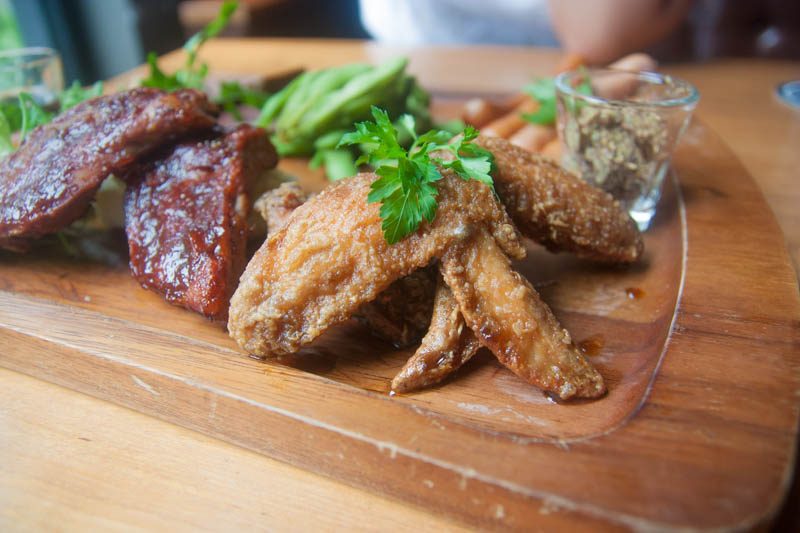 The Chicken Wings were marinated in a sweet soy sauce before being fried. The result? Crispy, tender and golden wings. The umami flavour of the marinade mingled well with the meatiness of the chicken, and the crisp exterior made for a perfect mouthful. Definitely our favourite of the platter! The Pork Ribs were glistening in their sweet marinade and tasted just as good as it looked. The flavour of the ribs, together with the sauce, was full-bodied and robust. We couldn’t resist and just dug in using our hands, savouring every bite.

We were a little let down as we expected the ribs to literally fall off the bone. However, even though the meat wasn’t tough or overcooked, it failed to achieve that level of tenderness.

On the other hand, the mash that it was served on was well seasoned and was not only smooth but not too runny as well. It was a good accompaniment to all the protein on the platter. 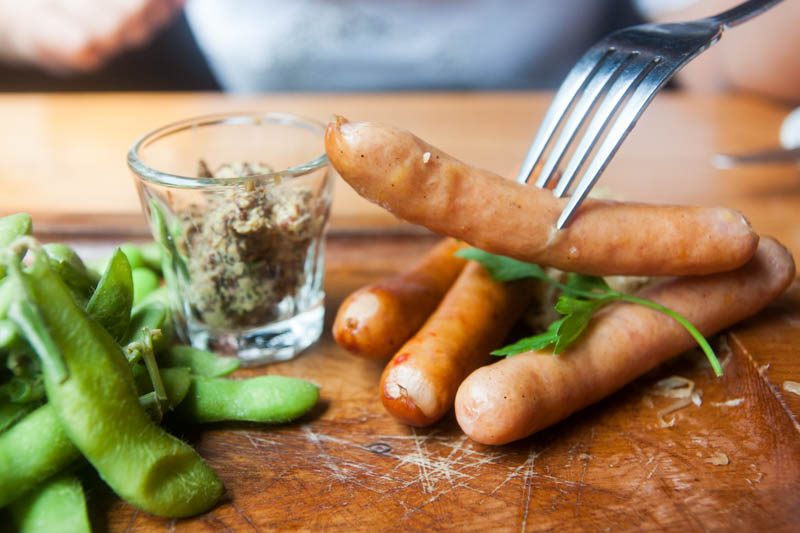 The sausages were pretty ordinary, albeit being tasty. We recommend trying them out with the mustard for a whole new flavour profile! 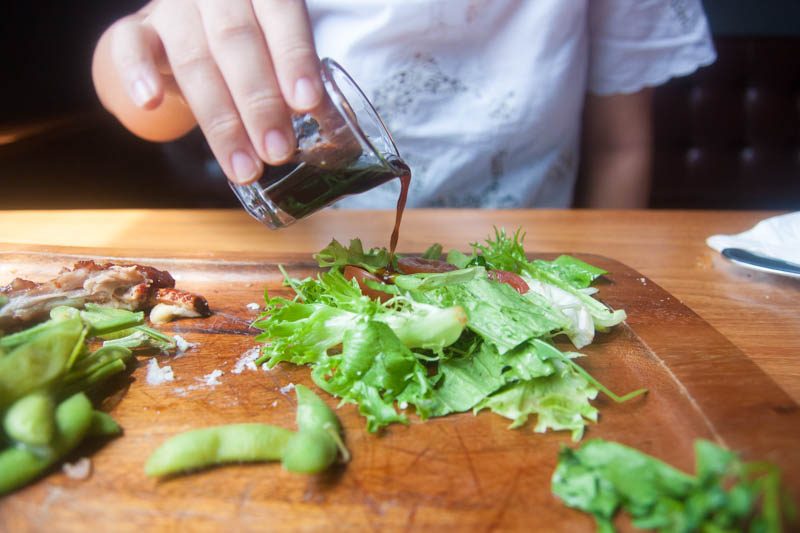 Salad was served again on the platter, however this time, with a wafu dressing. The dressing was savoury while being mildly tart and was surprisingly refreshing. This probably prevented our palates from being overwhelmed by the sheer amount of meat consumed. 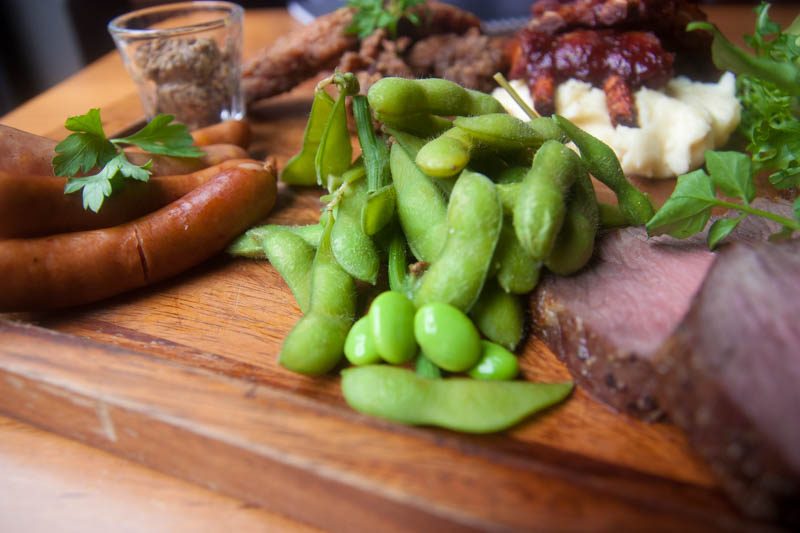 Lastly, a traditional Japanese bar snack, edamame. They came out warm and were well seasoned. Aside from that, they added a pop of freshness amidst all the meats in front of us. 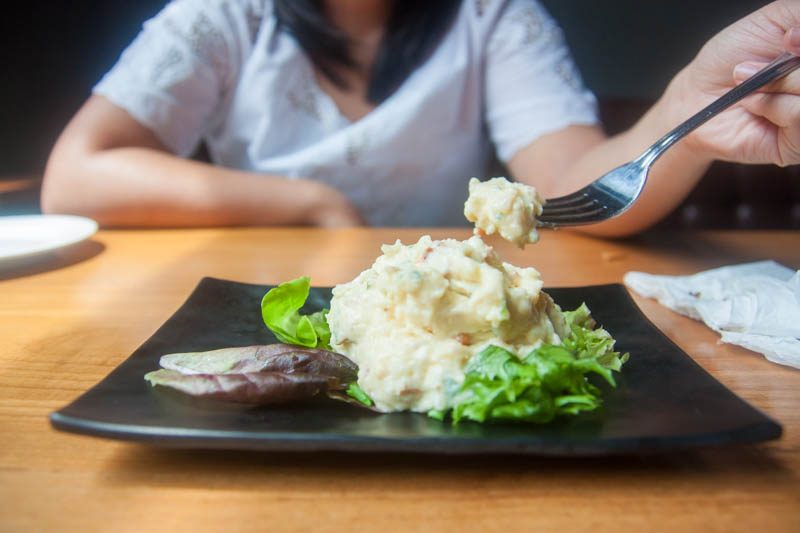 A staple in any Japanese restaurant, we had the Potato Salad. Ginza Lion’s rendition featured onion and bacon within the salad. The onions added a nice freshness while the bacon allowed for a more flavoursome dish. Although the dish is common, it was done well and we really enjoyed it. Another salad, the Roast Beef Salad had the same dressing as the salad on the platter but this one was served with slices of roast beef.

The beef was tender and warm, which paired nicely with the salad. The dressing also tied everything together, creating a cohesive dish. The Vongole Bianco is a pasta dish with clams in a white wine and garlic sauce. The restaurant used Asari Clams, which provided a nice subtle sweetness to the pasta. The pasta also tasted strongly of garlic and wine, making it very flavourful but still balanced. This was one of our favourites and is probably going to be for all clam fanatics as well. A generous basket of Truffle Fries was served after the pasta. Perfumed by truffle oil and with a dusting of parmesan cheese on top, the truffle fries rivals any that you would find in a neighbourhood cafe. The crispy and warm fries were fun to eat, just as any dish starring fries would be. The Calamari was very tender but the batter failed to hold on well. As such most of the crispiness and seasoning was lost even before eating.

On the other hand, their fish and chips had a light and crispy batter, while the fish inside remained moist. The dish was our absolute favourite of the menu and we polished the basket with ease 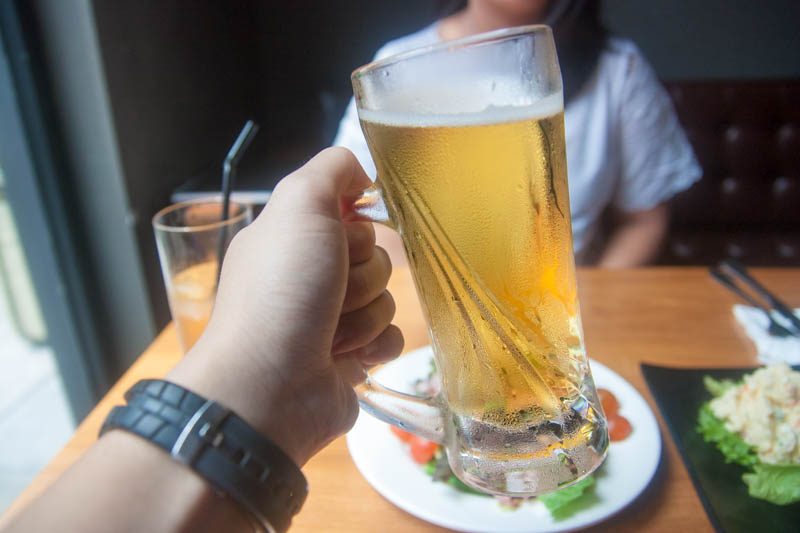 Finish off your meal with a pint of Sapporo Beer, which is served on a free flow basis so do remember to get a pint (or maybe a couple of pints). The beer was light and not as malty as other beers which we really enjoyed. It did not weigh us down despite eating all the food and felt like more of a refreshing beverage more than anything else.

If beer is not your thing then do get a glass of red or white wine (also free flow). For those of you non-alcohol drinkers (and kids of course), the restaurant serves soft drinks and iced tea, so fret not! The overall dining experience was pleasant, with the quick service and attentive staff. Although some of the food fell short of our expectations, most of it was largely tasty. This is, without a doubt, a great place to hang out with friends and chill over food and drinks.

The buffet is available from 12pm to 8pm on Saturdays, Sundays and public holidays so do prepare your tummies for this feast!

Previous articleYakiniku-Oh Goen: Get Your Grill On With Ingredients Air-Flown From Japan
Next article7 Beautiful Offshore Islands In Singapore For The Budget Traveller To Explore