As I sit down to write this piece, I’m stumped as to how to distil my afternoon at Hashida into a mere 800 words (now, in hindsight, it was closer to 1,000 words). Like live theatre and concerts, there is an ephemeral quality of these performances that any recorded video can’t quite live up to. And if you know the omakase at Hashida—it’s a show like no other. What I mean to say is, you have to be there.

Hashida is certainly new to Amoy Street, but it’s not new to the omakase scene. Ever since their first opening back in 2013, Master Chef Kenjiro ‘Hatch’ Hashida, or more affectionately known as ‘Hatch’, has gained a staunch following among the most discerning diners. After my meal at Hashida, I, too, joined the legion of supporters.

Omakase restaurants have a bad rap for leaning too much into subtlety, so much so that looking for the entrance proves to be a game of hide-and-seek. At Hashida, they employ the same philosophy but with a much more thoughtful approach. Once you step into Hashida, the boisterous lunch crowd and the sea of G2000 shirts fade away, and a hush settles in. The pebbled floor and incense burning away at the corner signal that you are in a different space altogether. A torii gate found at the entrances of the Shinto shrine greets me, and I am ushered into one of the private rooms, named Ei 詠 (Moon).

An omakase is an intimate experience. The meal is very much shaped by the philosophy and dining style of the chef; at Hashida, it has its roots in tradition but is not bound by its apparent rigidity. Hashida pushes the envelope and manages to create something fresh and different. You see this in the first starter, where even the humble Chawanmushi is given the chance to be more than just steamed egg. Instead of the usual flaxen, silky surface, what you see is an almost fluorescent layer of Japanese spring vegetable puree.

Within the layers of chawanmushi is a square of mochi housing translucent Japanese ice fish suspended in motion. It’s so simple, and yet the combination of ingredients is so unexpected that I’m giddy with excitement about what else is in store. The Sashimi course follows suit. A thoughtful repertoire of Hirame, Bonito, and Tako comes accompanied by an umami-laden morsel of cooked seaweed and a wakame salad. There is no doubt that each fish is fresh beyond measure. The Hirame was delicate and sweet, while the octopus was so smooth and velvety I might have shed a tear.

However, the real standout is Bonito, whose skin has been gently kissed by white-hot binchotan coals. A rather unorthodox move for sashimi but one that brings about tantalising smokiness to the fish. So much so, I can’t stop thinking about it.

As anyone well-versed with omakase knows, when a plate with pickled ginger is placed before you, that’s when the real fun begins. The sushi portion of an omakase is truly the best part of the meal and a playground for chefs to showcase their creativity and technical prowess.

One of the many joys of omakase is watching the assembly of each piece of sushi. I watch, entranced, and my heart skips a beat whenever Chef Kuroki (the chef who was in charge of our seating) hands me a piece. Truly, it’s a sublime selection of fish, and if you’re wondering, no, there’s no salmon here. We start with the subtle Tai (sea bream) that moves on to one of my favourites, Shima-aji. A rich, fatty number that never fails to delight. Then, it gets even better. They reach down and pull out a box of gleaming tangerine uni that I’d pick over Hermès any day. 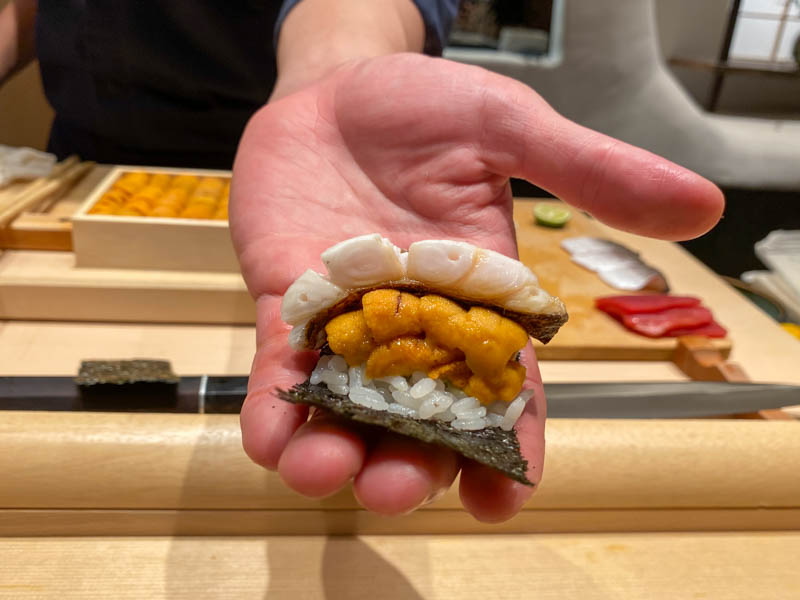 A precious roll of uni and tachiuo (beltfish) that’s barbecued right there in the room is handed to me, and I almost forget to take my obligatory shot for fear that my seaweed will get soggy. It’s a symphony of buttery slivers of uni that’s balanced by the mild-tasting beltfish. Then, one of Chef Hashida’s favourites—the Kamasu. This is a relatively uncommon fish for omakase, a Japanese barracuda that comes with a light aburi followed by a glaze. A chubby, omega-rich fish that I’ll be looking out for at any omakase to come.

It is tempting to whisper a ‘yes’ when Chef Kuroki asks if I would like more sushi. I would like to think I’m a prudent eater, and there can be too much of a good thing. They clear the sushi plate, and a sumptuous miso soup made with prawn paste spoils me for all miso soups to come.

At the end of the table, the other guests share a drink with the chef, and laughter abounds. A little while later, the ultimate crowd-pleaser arrives. 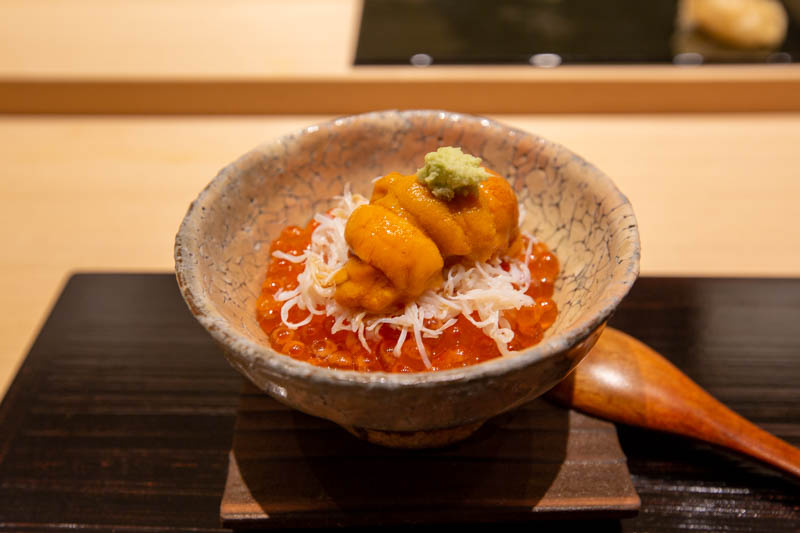 While I know this song all too well, indeed, nothing delights more than the holy trinity of warm sushi rice, crowned with uni and surrounded by glistening ikura pearls. They’re a classic winning combination in the same way no one would turn off ‘Bohemian Rhapsody’ if it came on the radio. Plus, as a special treat, we had a little bit of hairy crab thrown in. Oh, as if the day couldn’t get any better. The blushing pink otoro sushi finale makes me feel like all can and will be right in the world. It’s the cream of the crop, the belle of the ball, the crown jewel of sushi, and it is a good one at that.

In true Japanese form, dessert ends with seasonal fruits. Now that we’re done with all the pageantry, the dessert is a single slice of Beni Madonna orange and a halved strawberry. Alright, the clear Sakura jelly is certainly the last hurrah of showmanship.

I know, it’s a fruit but have you ever had an orange that teeters so perfectly between being sweet and sour, you wonder why you are only offered one slice? An omakase meal at Hashida is an exercise in thoughtfulness that exudes creativity, reflecting Chef Hashida’s philosophy. A walk through the restaurant, and you’ll see Chef Hashida’s everywhere from the carefully painted shades of grey in the Ei 詠 (moon) room to the light fixture that looks like the craters on the moon or clouds. Food for thought, if you will.

There is not a part of the restaurant where Chef Hashida has not had a hand in. With such attentiveness and continual striving for excellence, it is worth every penny.

13 Hidden Gems In Amoy Street Food Centre That Will Make You Go “A-Moy-God!”