A fully-equipped steakhouse in a charming part of a quiet neighbourhood at Jalan Riang (do note they have moved from Sembawang)? Sign me up!

We found High Steaks among the shophouses of Jalan Riang where it’s surrounded by landed estates. It’s a quaint location, known mostly to the residents living around the area of Lorong Chuan MRT and Serangoon. The layout of the restaurant is industrial casual, with red coloured brick walls and a sparse ceiling. Widely-spaced and fluorescent-lit, I imagine it would be more romantic at night. 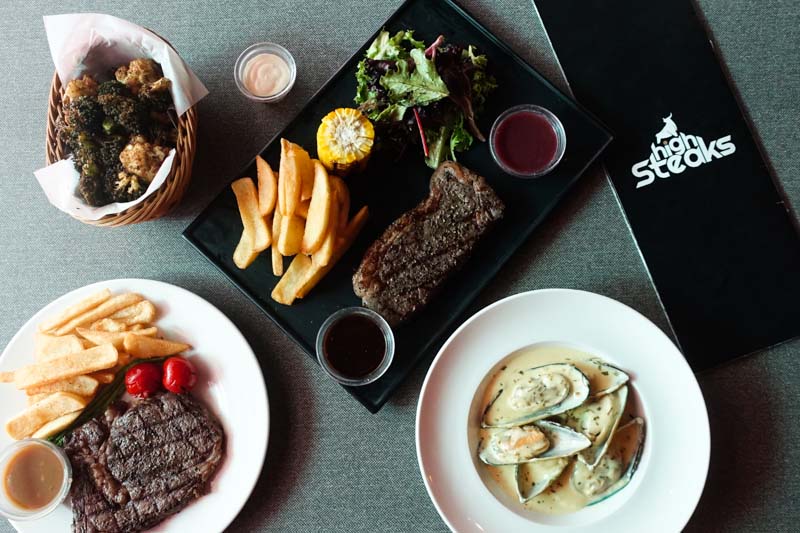 We munched on the sides of Fried Broccoli And Cauliflower as we waited for the steaks to rest, and found them surprisingly addictive. The tips of the greens were satisfyingly crunchy and tender. Light and flavourful, the fried vegetables had a dusting of the chef’s spice-mix when it came out of the fryer. If this was a sign of the dishes to come, our interests were piqued. The chef had recommended the Mussel Pot as a full entrée and we were so up for it. The crowd-favourite dish came as a set of 10 mussels cooked in a reduced white-wine infused cream sauce. The mussels were not as fresh as we’d like, but its quality still shone through.

The sauce had an undeniable citrus element that worked well for the overall plate. As such, we felt it showcased good understanding of seafood and its complementing flavours. 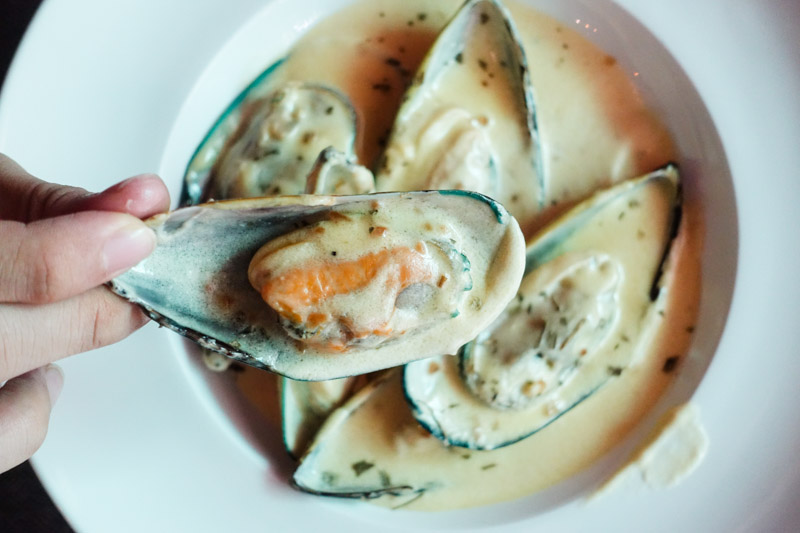 We then set our sights on the NZ Angus Striploin steak. We ordered it with a choice of red wine sauce for a premium of S$3, just to see what it was all about. It came on a stone platter which featured sides of fries, grilled corn and a salad tossed in a roasted sesame dressing.

We also requested the accompanying black pepper and brown sauces to be served on the side to determine if they really did make the overall dish better. 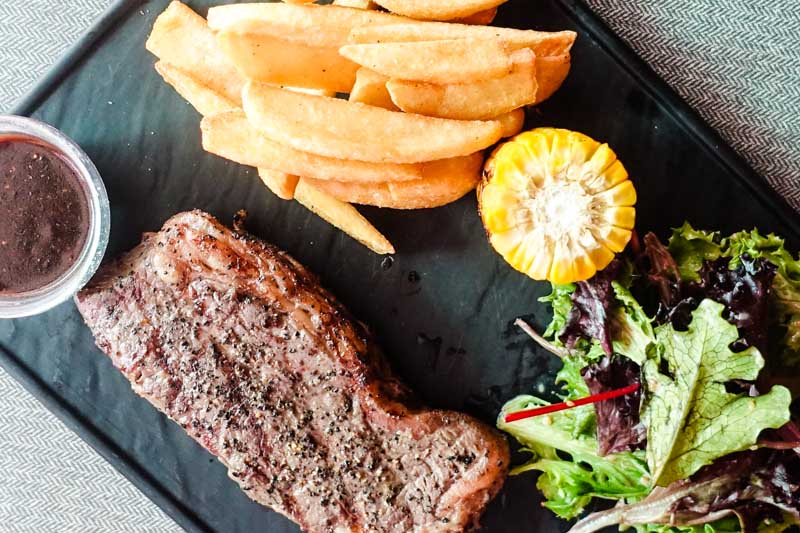 The grill marks on the steak were apparent as it came, and it got us very excited.

The head chef explained how they utilised the sous vide method to fully cook the steak to its desired temperature, before grilling it on the outside, browning and enhancing the flavour of the beef. We asked for it to be cooked medium-rare as per the international quality-barometer for steak and sliced into it only after sufficiently letting it rest.

The first cut showed a slightly overcooked piece of the steak, indicating that it probably had a little too much time on the grill. It was slightly tougher to chew and we were disappointed. 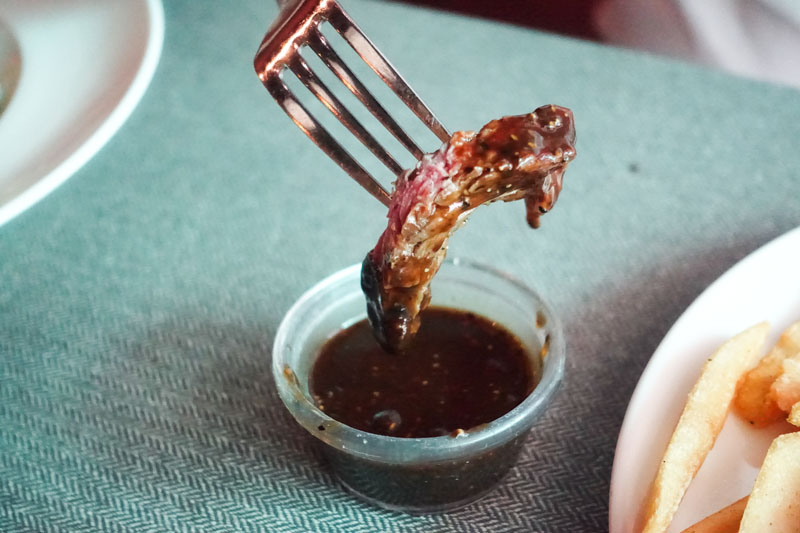 The steaks, however, were really well-seasoned and had great overall flavour owing to the quality of the beef itself. Perhaps with better execution on that day, this could’ve been impressive.

We were offered the option to pair it with any one of the three house-made sauces at the restaurant. We chose the black pepper sauce to lightly brush the piece of meat and heartily took a bite. While it did add a familiar saucy umami flavour profile, it made the quality of the beef go unappreciated. 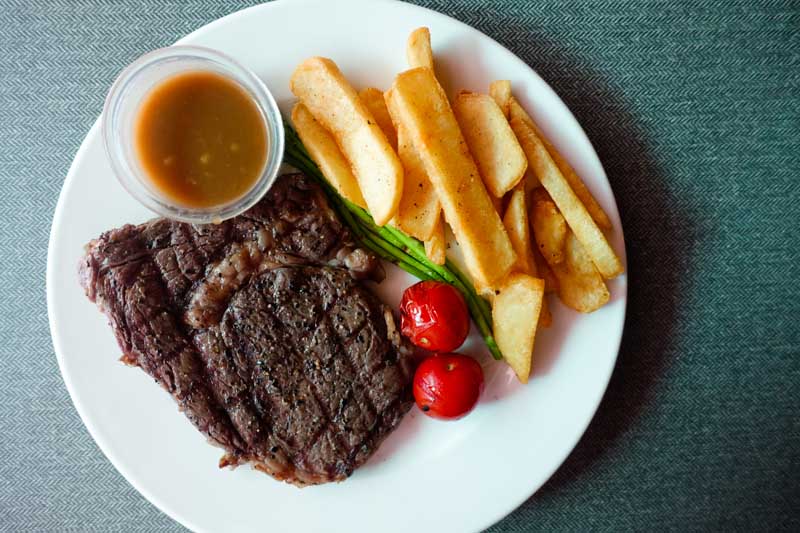 The premium red wine sauce confused us. It tasted kind of fruity and didn’t really fit the dish at all.

Our advice? Skip the sauces.

We finally had the Australian Wagyu Ribeye, and excitedly rushed to take a bite. Although cooked a little bit under, the beef was moderately soft and tender. There definitely was that melt-in-your-mouth quality.

The seasoning was again done fairly well. The beef was still juicy as I carried a slice into my mouth. The marbling of the beef made it extremely flavourful. 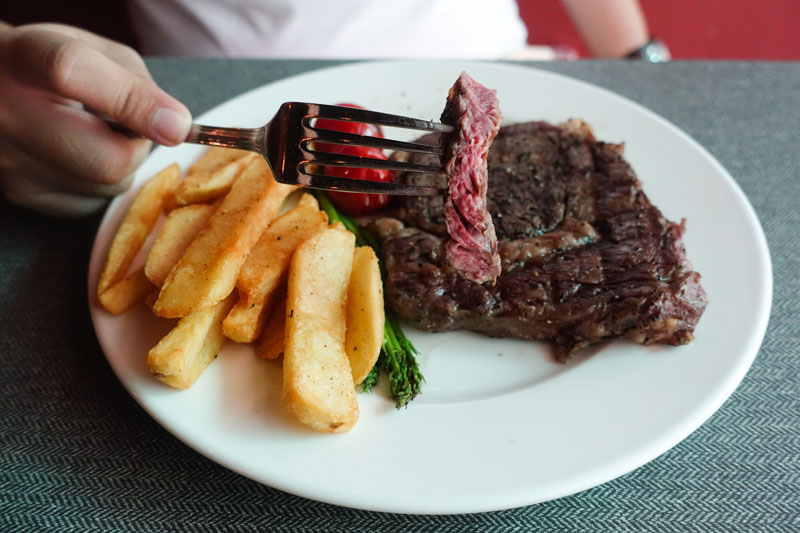 An underrated element of the dish was its sides. The steak fries were of the perfect cut and tasted great. Crispy on the outside too. The grilled tomatoes were also a joy.

The restaurant’s price-point is of good value for some of the quality offerings in its range for choice cuts of beef, but I feel like they are a little way away from fully living up to their potential. The friendly prices currently do justify the portion sizes, but they could definitely do better in solidifying their cooking practices for now.

We’ve definitely tasted enough to like the restaurant and could see them really start to establish themselves as one of the best value-for-money steakhouses in the country soon.