Hong Heng Fried Sotong Prawn Mee has won 2016, 2017 and 2018’s Bib Gourmand consecutively which promises high-quality food at affordable prices; in Singapore, the criteria is to be below S$45 per person spending. 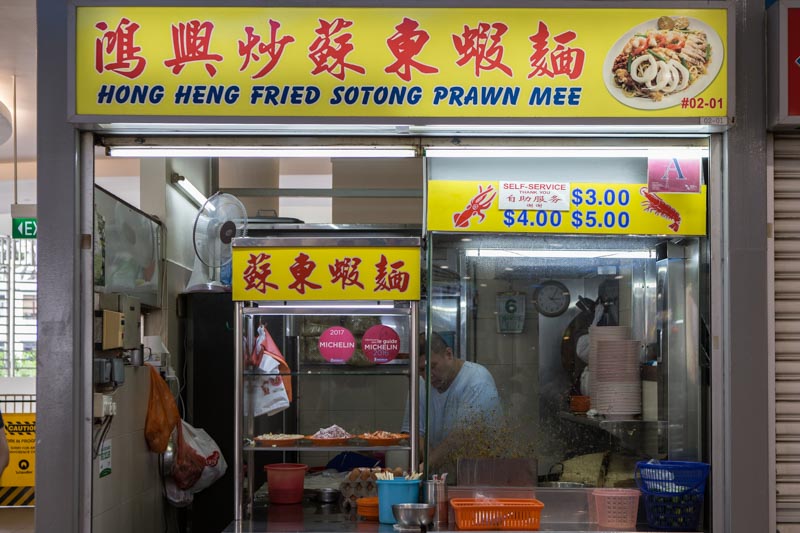 What’s the fuss about? We finally paid this stall in Tiong Bahru Market a visit to find out what all this queuing was about. Chef Manfred is a humble 40-something-year-old who seemed a bit shy. I figured it was because he was really focused on frying the noodles well instead of getting distracted by me. 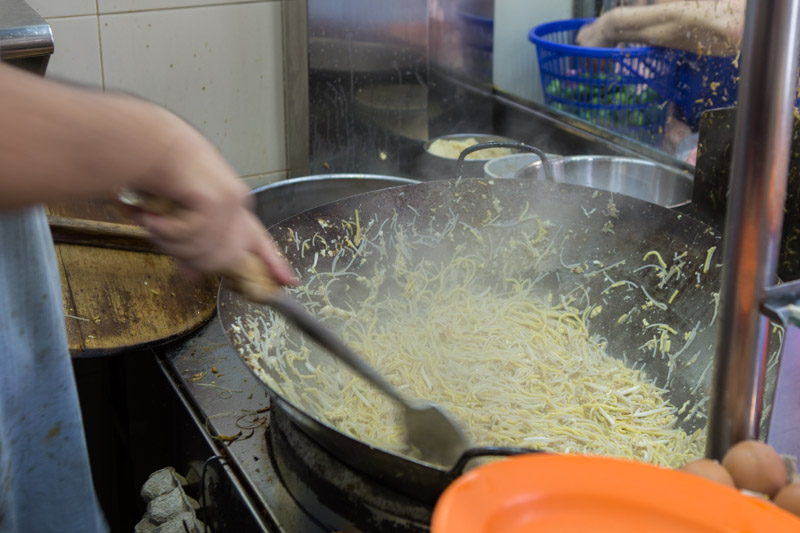 Manfred shared that he had taken over the business from his mother at 27 years old, after quitting his job as an engineer. Since he had helped out at the stall from young, Manfred joked that he “did not really have to learn all over again”. 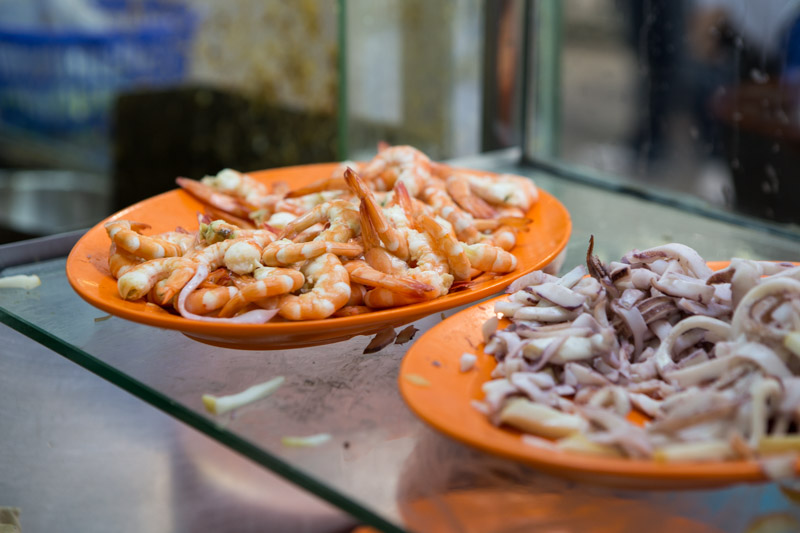 Plates of cooked prawns, squid and fishcake are placed at the side, which will be cooked together with the noodles whenever a new order comes in. There is a perpetual queue during lunch as well as throughout the day, but customers do not have to wait long as the queue moves rather quickly.

Hong Heng does sell out early before their official closing time, so do come in advance if you want to try this stall. 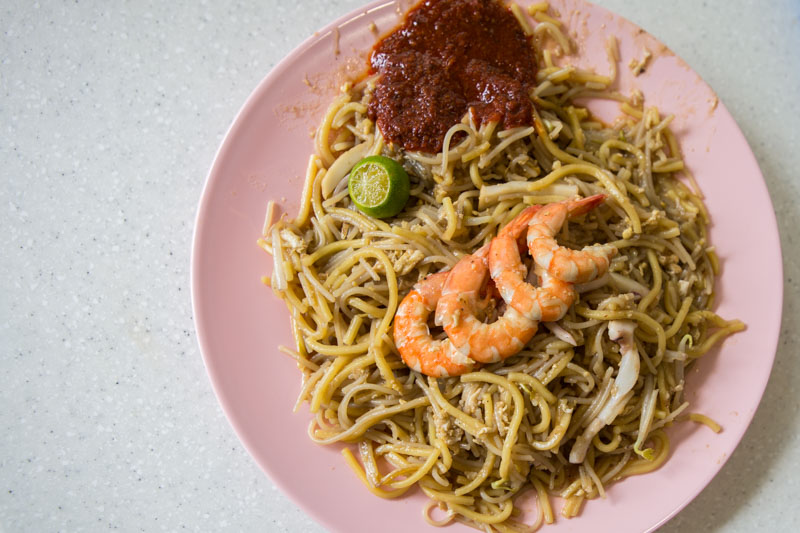 We ordered a plate of the Fried Sotong Prawn Mee ($5), the largest size offered. For smaller eaters, you can choose from $3 or $4 portions. But man, was the flavour bland. The noodles are also firmer than usual (which some might argue makes it taste better), but I would disagree with this texture as it varies too much from my favourite comfort Singapore dish built since childhood. Because the noodles are not cooked as thoroughly, the the ‘ki‘ alkali taste of the yellow noodles is also accentuated. 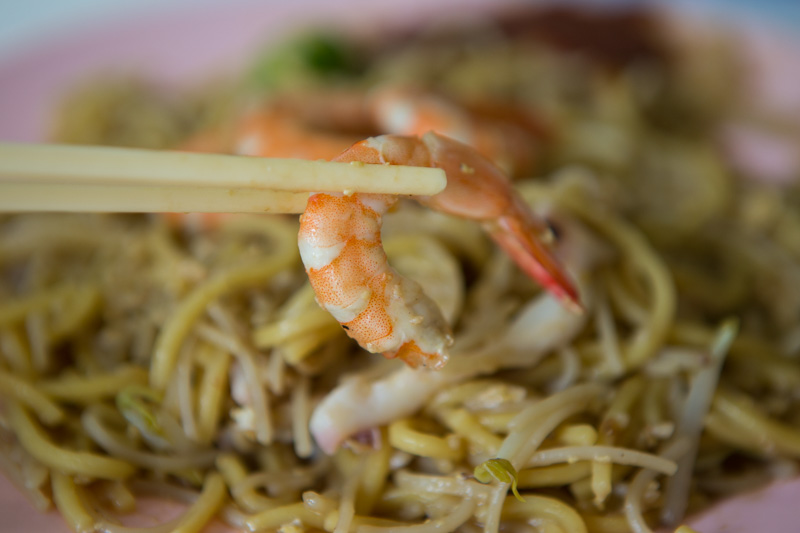 The prawns were cooked well, but my gripe would be that they were rather small in size. Then again, we had four of them, which was a decent amount. Worthy of a mention was the squid, which was incredibly soft and tender. 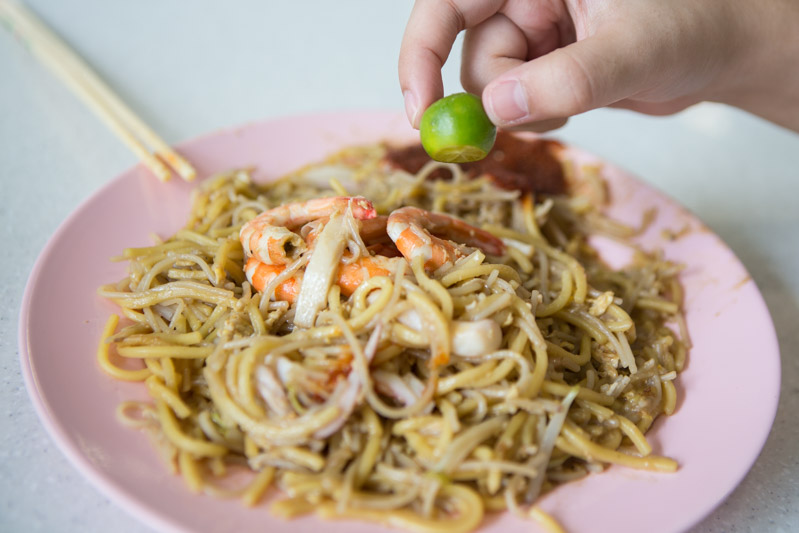 I would definitely recommend squeezing the lime over the noodles before digging in. The zesty flavour would amp up your noodles, allowing the flavour to be cut through. 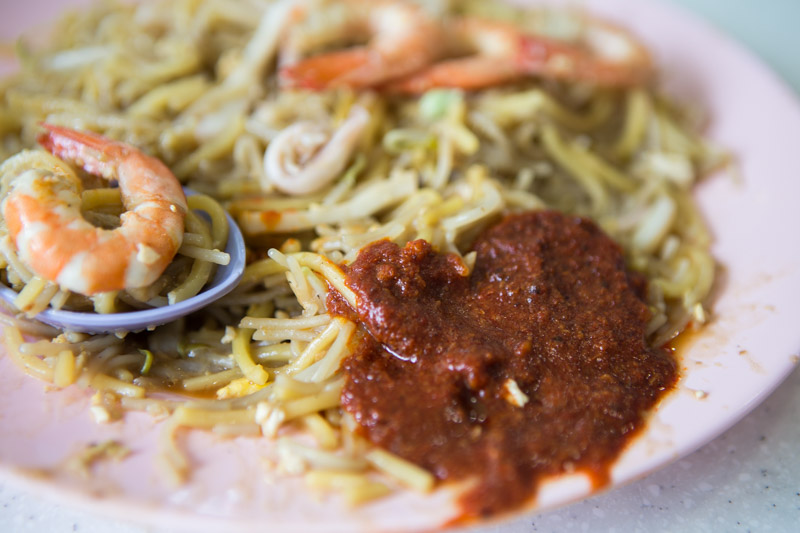 The chilli was not too spicy, but oddly very watery.

It’s really puzzling to me why this stall commands such a long queue, or got a Bib Gourmand award.

For me, Hong Heng is the epitome of average Hokkien mee that you can find in any random hawker stall in Singapore.

At $3 with two small prawns and a sizeable portion, undoubtedly it’s great value especially for lower income individuals, however it is really not as mind-blowing as the media puts it out to be.

Previous articleCÉ LA VI: Indulge In Modern Asian Cuisine With A Panoramic View Of Singapore’s Skyline At Marina Bay Sands
Next article10 Bizarre But Underrated Asian Delicacies That You Must Try Once In Your Lifetime