Every time I’m at Old Airport Road Food Centre, I find at a loss because I can never decide what I want to eat. With so many must-try stalls at this popular food spot, could there possibly be more to add to the list? Of course, the promising hub doesn’t disappoint. Walking down the row of stalls, I was drawn to Hua Ji XO Fish Head Bee Hoon solely based on the extensive queue it attracted.

Its bright yellow signage wasn’t hard to miss. I also noticed that everyone in the queue left with the same dish on their tray – a brimming bowl of fish head noodle soup. 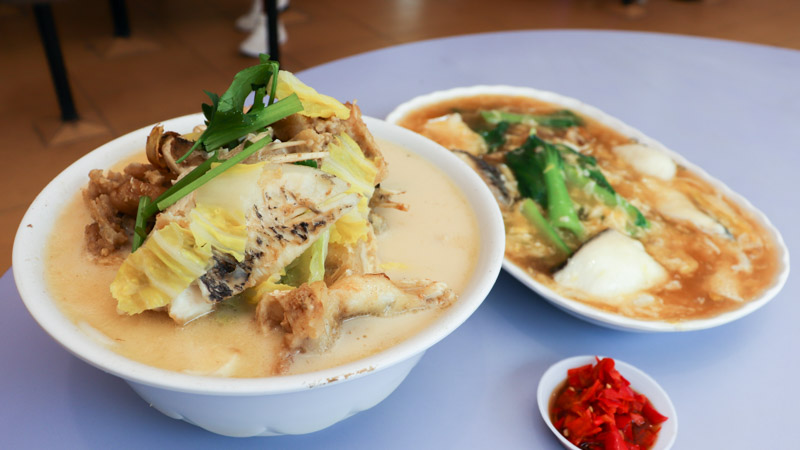 As kiasu as I was, I joined the queue and followed suit. You’d think they only sell one popular item as per their stall name, but that wasn’t all.

Despite the endless bowls of fish head noodle soup, I thought I’d try both their best-seller and runners-up. Boasting a large serving, the Fish Head Bee Hoon Soup (S$6) was close to a ruler’s length high. The milky soup was almost overflowing out of the large bowl, with a tower of fried fish.

If there was a sub-category for tallest noodle soup bowls, this would be Mount Everest. For the price point, this was definitely worth it. Right off the bat, I went for the voluminous fish that completely covered the base. Flash-fried to a nice brown, it was mildly crispy and just the right texture. I managed to dig up a fleshy piece of fillet and was pleased to see how supple it was.

The fish tasted fresh and less greasy, and didn’t have any excessive fishiness.

The act of recycling oil is common in food businesses but I was sincerely glad Hua Ji XO Fish Head Bee Hoon avoided this practice. Then again, perhaps I was lucky I dropped by on a day that they used a fresh batch of oil. The wholesome bowl only came with one choice of noodle, which is the familiar thick white beehoon. I found the portion of noodles to be less than I expected but with the vast amount of ingredients, I couldn’t complain much.

The silky consistency of the noodles paired delightfully with the milky soup that was easily the crown jewel of this dish. Have you ever had soup that was so addictive that you slurped up every last drop of goodness? Hua Ji XO Fish Head Bee Hoon is undoubtedly one of my top five contenders for the best fish soup ever.

You might be sceptical towards my brazen claim but let me explain why.

The hearty broth is boiled with fish bones for a minimum of six hours, which extracts all the sweetness to produce a natural fish soup base. And the magic ingredient? Alcohol. A popular addition to fish soup is XO, a type of brandy that heightens the intensity of the base flavour. Hua Ji XO Fish Head Bee Hoon doesn’t overwhelm its broth with excessive amounts of XO, but they add just enough for you to detect that hint of liquor.

It was thick, milky and oh-so sinful. With such an irresistible broth, I could see why customers waited patiently in the queue just to get their hands on one bowl. One of my criteria when it comes to fish soup is the addition of ginger and Hua Ji XO Fish Head Bee Hoon checks the box. Unlike most places which add fresh, raw ginger slices, this version takes it up a notch by frying their ginger to a crisp brown.

By pre-frying the slices, it infuses a sharp spicy bite that only magnifies the bold flavours of the soup. Just when I thought it couldn’t get any better, I’m proven wrong again with each component. Of course, I added some chilli padi to introduce a kick of spice into the decadent bowl. An optional move, but I highly recommend it for that extra oomph. After that exceptional meal, I wondered how their runners-up dish would fare. Their Sliced Fish Hor Fun (S$4.50) looked plain and slightly underwhelming, especially after the previous stellar dish we gobbled down.

Out of 10 in the queue, I’d say only one would order this other than their famed fish soup. Was it overshadowed by their star dish or was it simply too ordinary? With a glistening and viscous egg gravy, the dish was plated with thick slices of fish and vegetables. It’s served with fried hor fun (flat noodles) tossed in dark soy sauce.

The egg gravy had a nice consistency that wasn’t too starchy nor watered down. Yet, it really wasn’t much to shout about. I wasn’t very fond of how the coating of soy sauce on the flat noodles sweetened the base. I found the amount they used was too heavy, which interrupted the savouriness of the egg gravy. The fillet slices were thick and generous, with a flaky texture which was pleasant. Altogether, the various components brought about a decent dish but nothing exceptional.

Don’t get me wrong, it wasn’t all that bad. It just didn’t quite suit my liking and was too ordinary to stand out.

Hua Ji XO Fish Head Bee Hoon certainly nailed it with their renowned bowl of soup. I must say, I would return in a heartbeat just for another sip of that heavenly soup!

For their other dishes, I’d suggest giving it a miss. While my experience with their runner-up dish wasn’t quite encouraging, their fish head noodle soup is all you need to try if you’re at Old Airport Road Food Centre.