Beyond its Michelin star status, the food at JAAN is something one has to be patient with; a meal here — even if it’s a weekday lunch — requires a conscious portion of one’s day to truly experience a gratifying meal and savour the flavours. 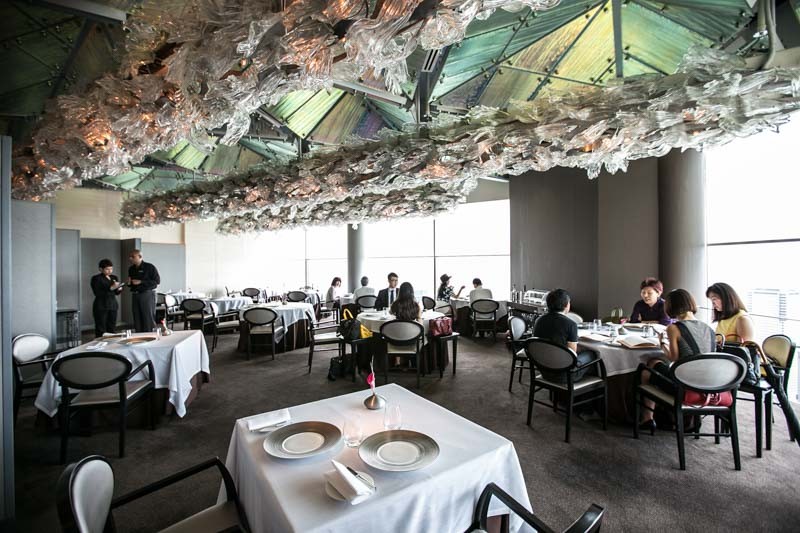 As the menu alters along with the seasons, it’s never the same dining affair twice and therein lies its appeal and one’s gastronomic journey. 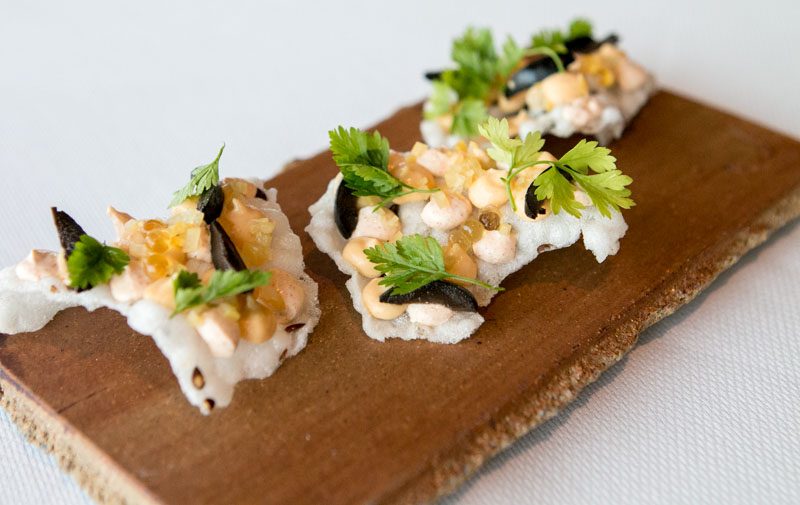 For this Spring 2018, Chef Kirk Westaway pays homage to his hometown of Devon, on the Southwest coast of England, by incorporating produce and familiar flavours into the menu. One of the first small bites on the menu is Tapioca Chips, Cumin Hummus, that was surprisingly savoury given its minuscule size.

The crunch was unbeatable; I could hear it ringing in my ears. The hummus felt like velvet on the palate, and instantly my hunger became more apparent. 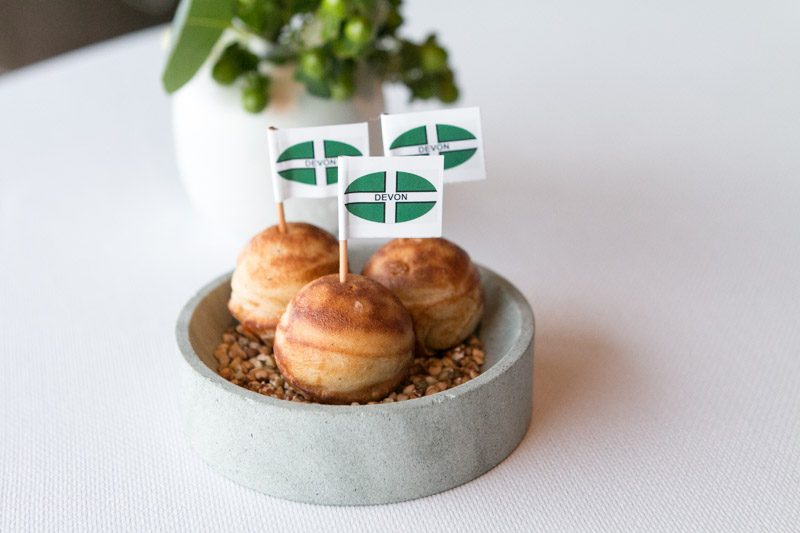 I would have preferred this dish to be served warmer (almost piping hot, actually), just to be able to really enjoy the contrast between the sponginess and the creaminess. Other than that, these tiny poppers were delectable. 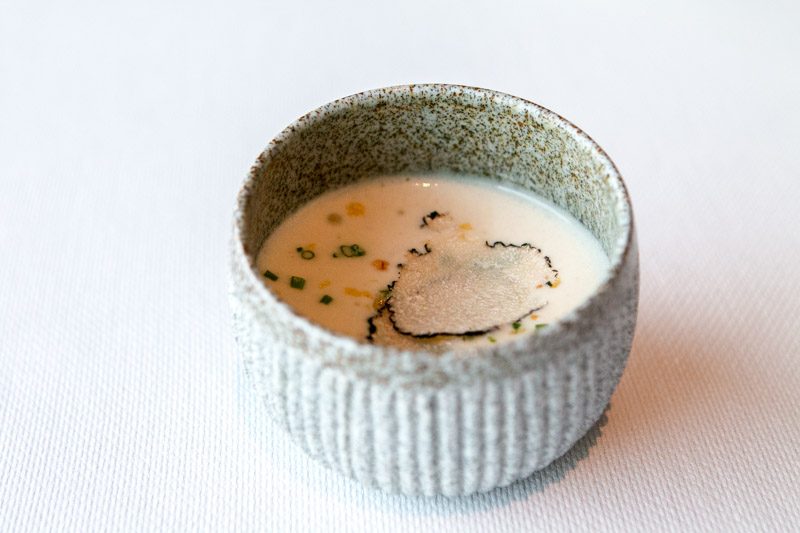 The Charlotte Potato, Truffle Bouillon is a great way to warm the belly if lunch happens to be your first meal of the day. Just the wafting aroma of it as the server settled the tiny cup in front of me was sufficient to make my mouth water. 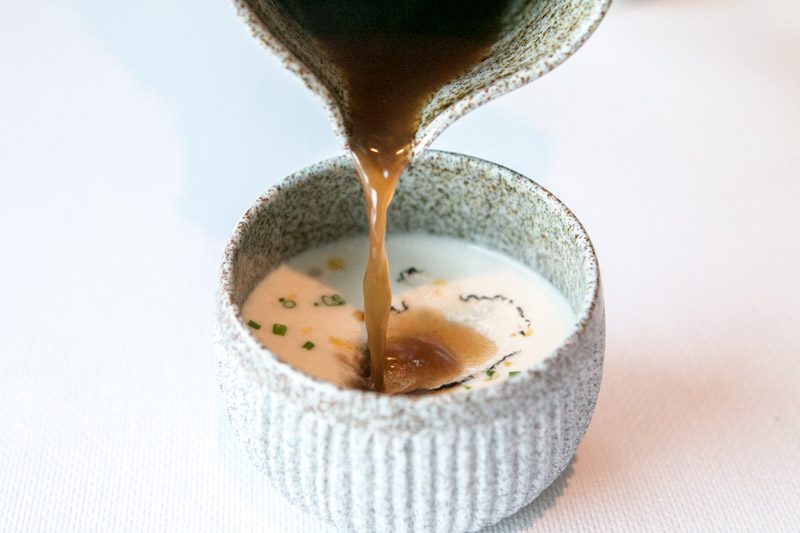 The mouthfeel was creamy and foamy at the same time. The unexpected bits of potato and mushroom were a delightful touch, giving the dish an earthiness that was soothing. I only wished it could have been served as a full appetiser (but then I wouldn’t have room for the rest of the courses to follow). The only time I mention a restaurant’s bread is when it has a right to be mentioned. JAAN’s bread is homemade and served atop a bed of warm charcoals so that it’s constantly kept warm at the table.

A worthy mention is the accompanying seaweed butter that’s umami and decadent, but I was more than overjoyed just eating the bread on its own. With a crusty shell and a pillow-centre, this carb-lovin’ woman was very pleased. 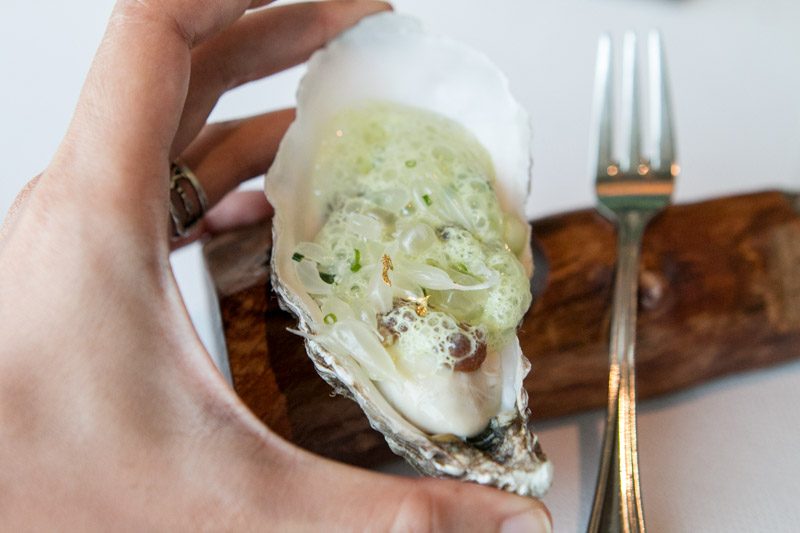 Anyone who knows me well enough will know that it took me a long time to want to eat oysters, let alone appreciate them. I’m slowly starting to get the hang of it, but it’s when I get the chance to taste amazing ones… that’s when I know what I’m missing out on.

The Majestic Irish Oyster With Ponzu is unlike any other I’ve eaten before. The taste was delicate yet briny. It felt heavy on the tongue, but went down mildly. The ponzu cut the saltiness elegantly and I could hardly taste the familiar fishiness that most would associate with raw crustaceans. 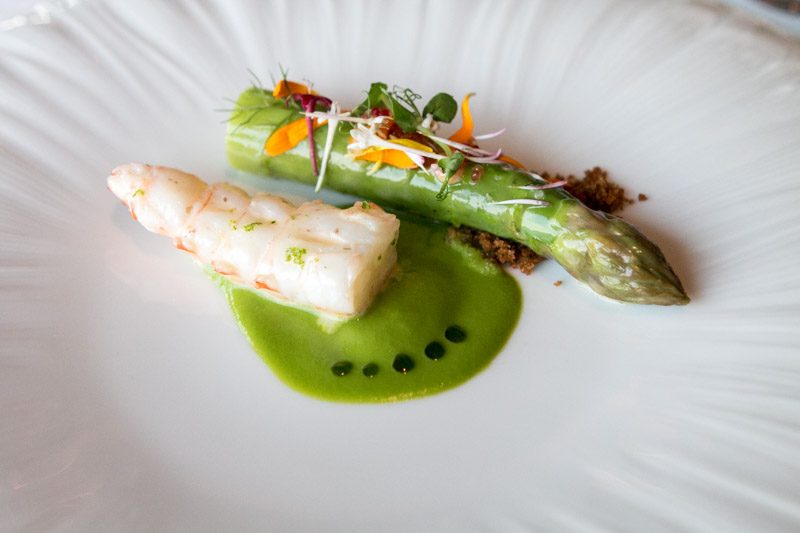 Fun fact: The asparagus for the Pertius Asparagus With Langoustine was meticulously hand-picked by Chef Kirk after he went on a tasting spree of numerous stalks, and is a rare variety grown in Pertius, Provence. It’s meant to have the best balance of bite, flavour and texture, making it hard to disagree with this dish at all!

Daintily placed at the edge of the plate, it felt like I was eating two forms of produce — one from the sea and the other from land — straight from its sources and into the pan. The langoustine’s flavour profile was clean, fresh and simple, while the asparagus tasted potent and sweet. 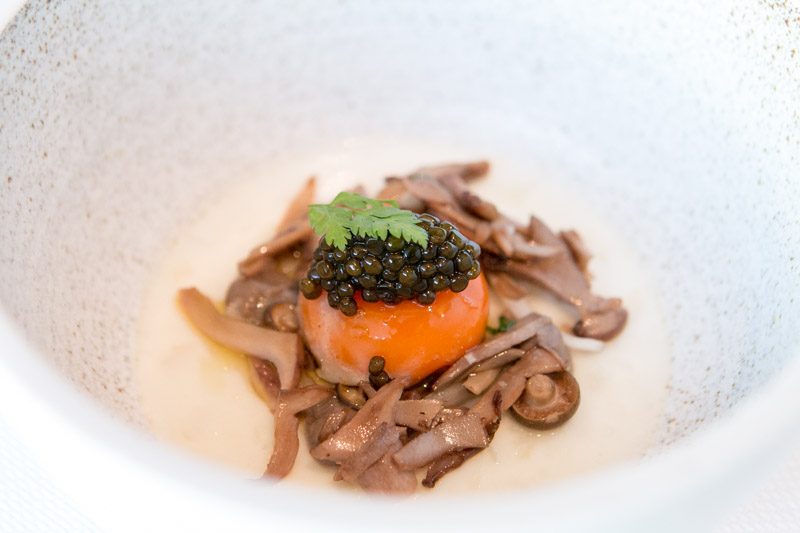 I am biased towards dishes that bring to mind a warm hug, and the Eggs In An Egg… is one of them. Served in a large egg-shaped dome that gets uncovered at the table, there was so much muskiness here that it gave me woodland (the forest, not the neighbourhood) feels.

Oscietra caviar sits atop an orange-flame egg yolk, surrounded by bluefoot mushrooms and cradled in a panna cotta made with cauliflower. The dish is smoked with rosemary so I got whiffs of this delightful herb with every spoonful, yet subtle enough to allow the milder ingredients like caviar and egg yolk to come through. When I first eyed this plate, I was trying to figure out where the scallop was. The Scottish Scallop With Chestnut Mushroom Cannelloni duped me into thinking the scallop was in the puree. But no, it was hiding in plain sight, eye-shaped.

The cannelloni is hand-rolled and stuffed to the brim with sauteed mushrooms that in spite of my growing satiety, managed to keep encouraging me to finish my plate. The scallop was fork-tender and tore apart effortlessly. 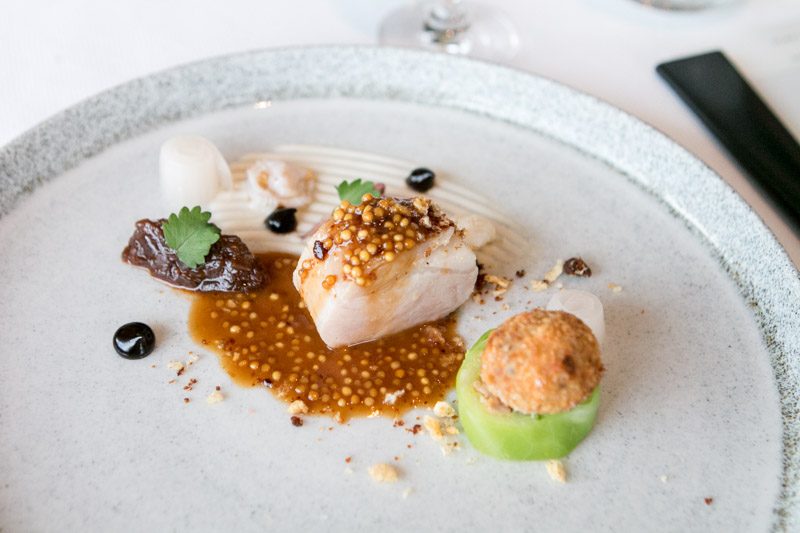 The meat had finally arrived and I rejoiced! Iberico Pork With Mustard Sauce was more art on a plate than I could’ve asked for; it looked like too much effort had been put into plating for me to destroy it.

If the plating seemed meticulous, wait till you hear about how the pork loin is seasoned, trimmed and marinated for an hour, before being cooked at 60°C for 45 minutes. Then there’s also a tender pork belly rolled in blanched cabbage. Don’t forget the home-cured mustard seeds and pork jus to add to the dish’s lavishness.

Safe to say, this was worth the wait. 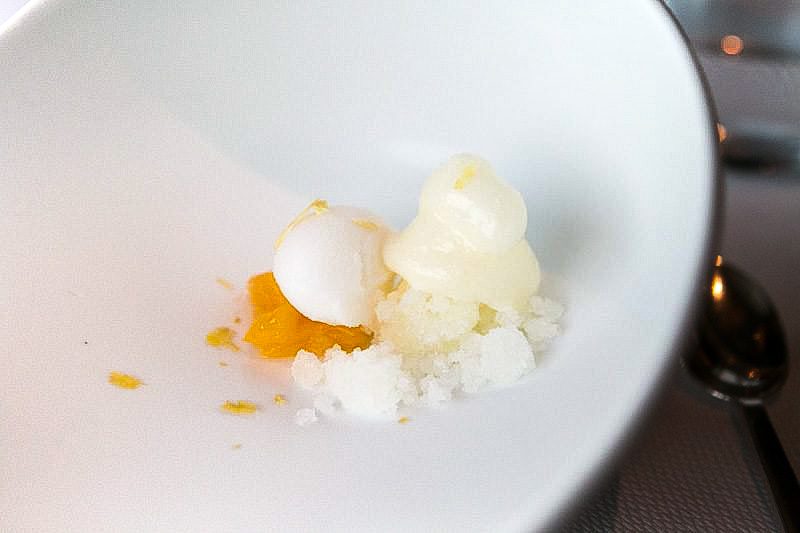 A palate cleanser before the actual dessert is always a welcome extra treat, and the Amalfi Lemon With Cardamom was an ideal refreshing interlude after the numerous courses. It was zesty, bright and slightly herbal, but not without being overpowering. 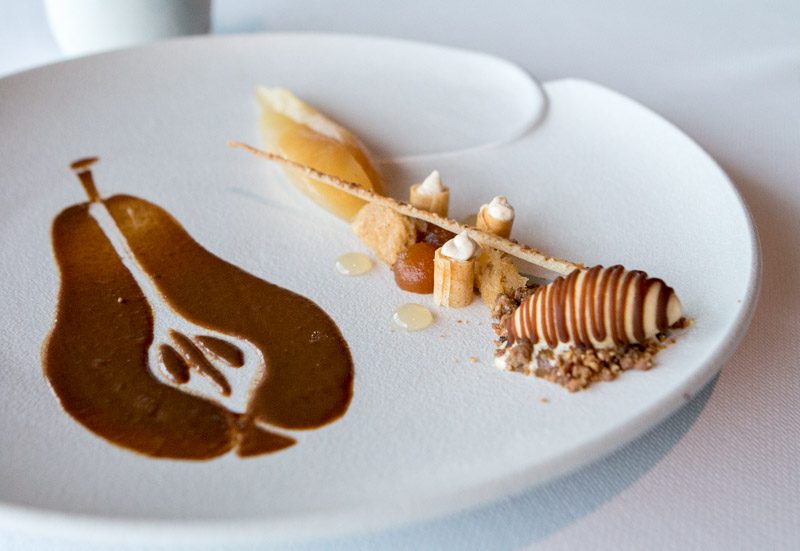 Yet another artwork arrived at the table and it was the Conference Pear With Brown Butter. I loved how texturally varied the dessert was, from crumbly to spongey to creamy.

Every element had a nice balance of saltiness, so that even a dessert that’s meant to be sweet didn’t turn out overwhelming. 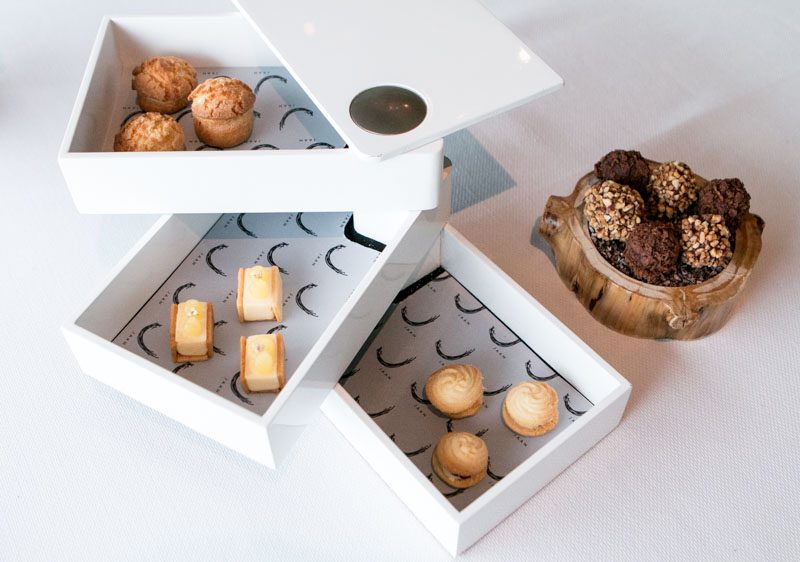 To finish, every table that dines at JAAN is spoiled with tiny after-lunch/-dinner treats that can vary according to the kitchen’s fancy. What felt most rewarding about this was that as a guest, I was made to feel like I could take my time to finish off my meal and that the kitchen was appreciative of every single diner’s patronage.

Dining at JAAN may come with a handsome price tag, but it’s such a worthy investment given that it’s a dining experience unlike any other.

The food was prepared meticulously, the service was impeccable and not to mention the breathtaking view. It’s a place well-worth saving up for if you’re looking for a place to celebrate some of life’s best memories.